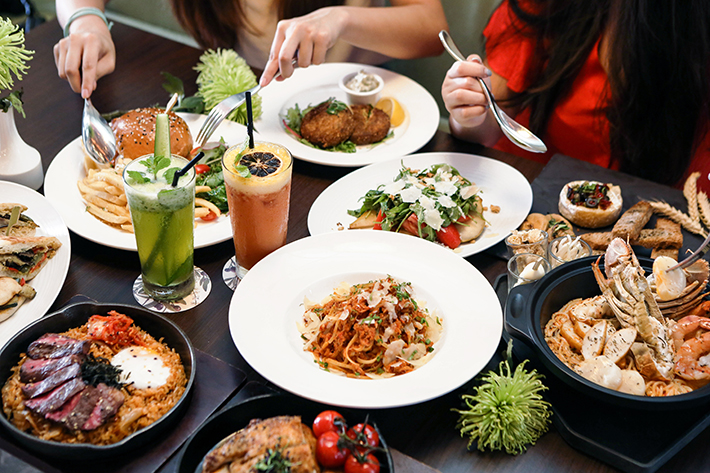 The foodie community wept when The Marmalade Pantry announced back in mid-2018 that it was closing it’s outlet at ION Orchard. A beloved high-tea spot in the heart of town, we fell in love with everything there from their charming ambience, innovative brunch dishes and a wide selection of artisanal teas and cakes.

Well, surprise, surprise, the home-grown bistro is set to return to its former premise on the 4th level of ION Orchard once again. This time, armed with a tasty arsenal of new dishes in addition to signature favourites such as their Spicy Crabmeat pasta and Sticky Date & Toffee Pudding. Looking forward to other new and exclusive to this outlet dishes like the stellar high-tea set and a trio of decadent desserts specially crafted by Masterchef Singapore’s runner-up, Chef Genevieve Lee as part of a collaboration that pays humble tribute local dishes and in support of local talent.

With a whopping total of more than 10 new and exclusive menu items and more, be wowed by the likes of their new Asian section, featuring the Kimchi Fried Rice, served with a gorgeously pink medium-rare strip loin and the Singapore Laksa, a homage to our beloved local dish but with the addition of slipper lobster. Looking to pamper yourself as you catch up with friends? Their Decadent Afternoon Tea Set comes with a variety of sweet and savoury confectionery delights and freshly brewed pots of tea by Monogram. 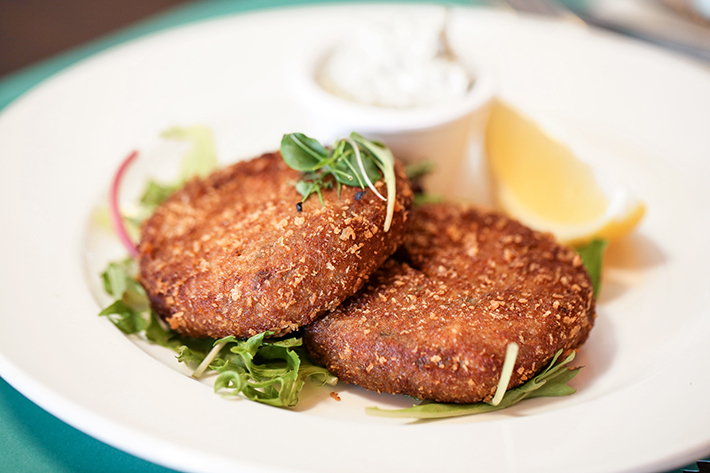 The key to any good crab cake is using fresh lump crabmeat, leaving them slightly chunky and not overly shredded and to go light on the filler. Safe to say, the folks here nailed it perfectly. Their Maryland Crab Cakes (S$26++) focuses squarely on the crab, allowing each bite to be crispy and packed full of sweetness and natural flavours of crab.

The homemade tartar sauce served on the side was also spot on, not overly rich with a good amount of diced gherkins added to give the sauce a sufficient citrus kick to complement the crab cakes. 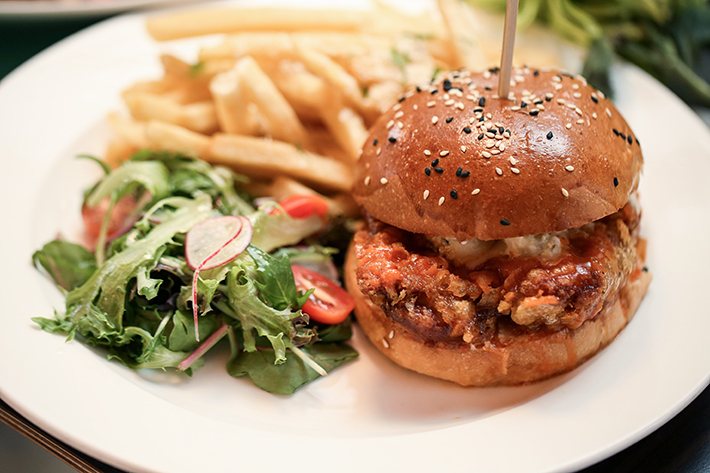 Delightful in both its flavour and texture, the Spicy Sriracha Chicken Burger (S$24++) assaults the several fronts. First, you get the crunch from the perfectly deep-fried spiced chicken patty before succulent juices come oozing out, followed by the tangy kick from the Sriracha mayo which nicely complements the rich notes of the blue cheese. 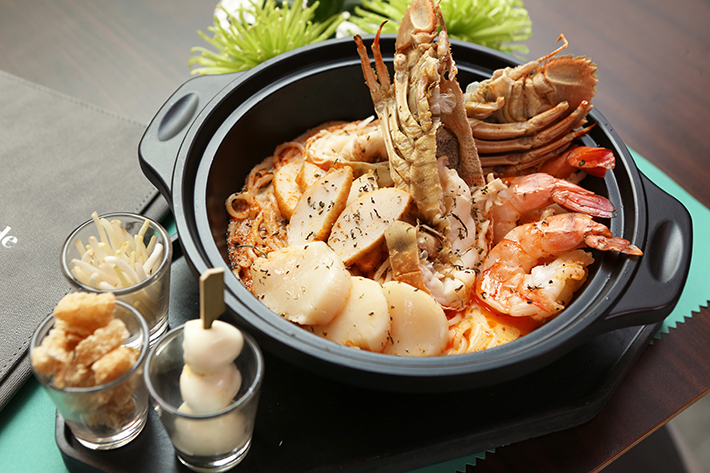 Unlike many restaurants out there that try to tweak and reinvent local dishes to the point that it’s unrecognisable, the good folks here do well to retain the essence of what they aim to recreate. The broth of their Singapore Laksa (S$32++) is rich, spicy and exudes a bold seafood aroma and also features the likes of slipper lobster, quail eggs, tiger prawns for that luxe appeal. 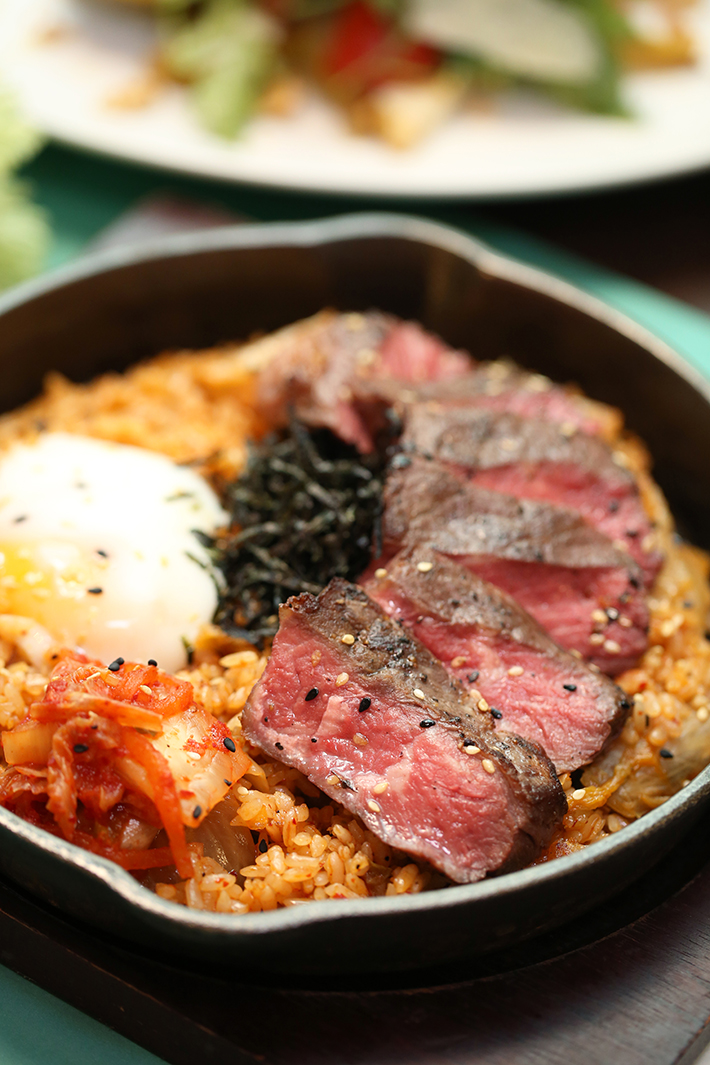 A homage to the classic after-tipple comfort food, we were most thrilled to tuck into their new Kimchi Fried Rice (S$26++). On a bed of fried rice cooked with fresh kimchi, sits a nicely seared striploin steak, perfectly pink in the middle and golden brown from edge to edge. For umami, nori is garnished over the top and sous vide egg, served on the side for added richness.

Served flat on a griddle pan—similar to how a Spanish paella would be served—the bottom layer of the rice achieves an even crust, giving the dish a toasted flavour and a crunch as well. 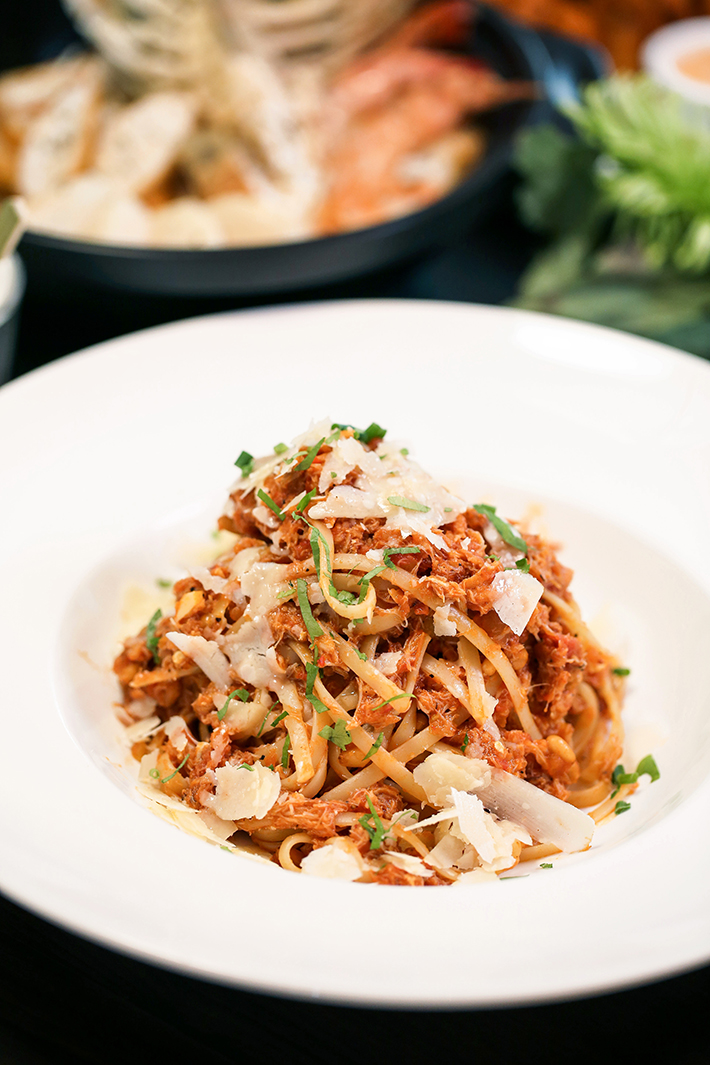 Perhaps one of the best pasta dishes we’ve tried here to date, the Spicy Crabmeat Pasta (S$26++) impresses with its generosity with good quality crabmeat, perfectly cooked pasta and a flavourful, umami-dense sauce that binds everything together nicely.

The addition of pine nuts into the mix gives the dish a nutty, somewhat buttery flavour which does well to complement the sharp taste of the spicy tomato sauce. 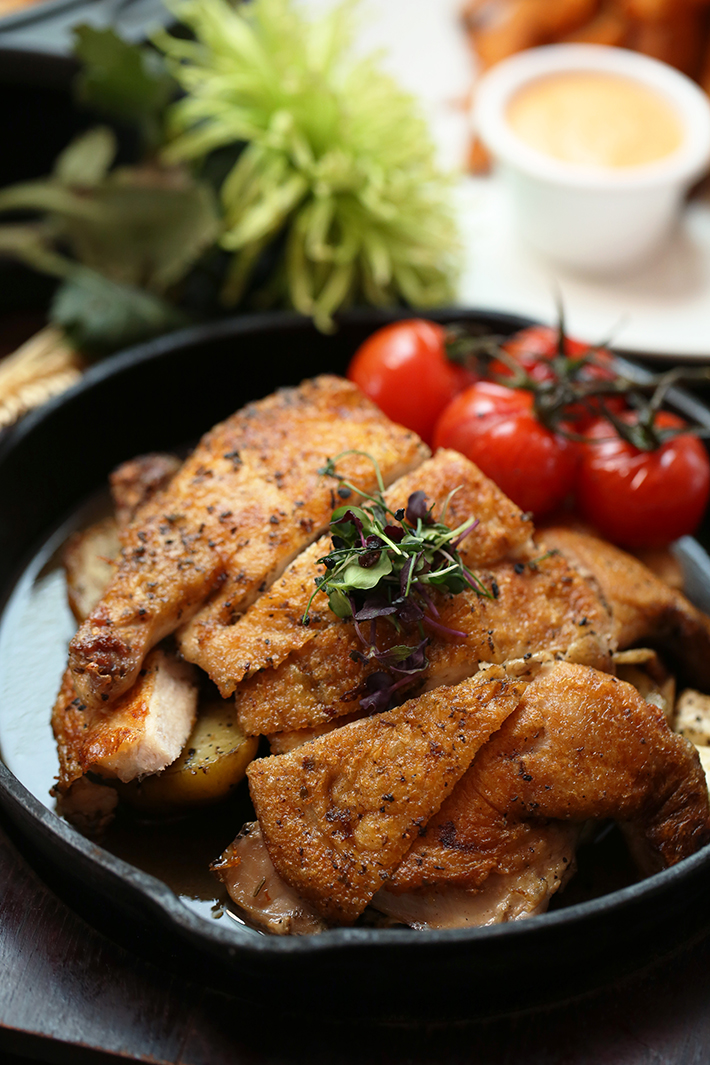 The method of cooking a chicken, skin-side down with a weighted object (in this case a brick) pressed down on it allows the skin to crisp up evenly. It also forces the meat to remain flat, ensuring that every morsel of meat cooks at the same pace.

We were beyond sold the moment we tasted their Brick Pressed Chicken (S$30++). Well-seasoned and crispy with a buttery herb flavour to underscore it, every bite was a joy. The dish comes served with roasted celeriac, potatoes and topped with truffle herb butter. 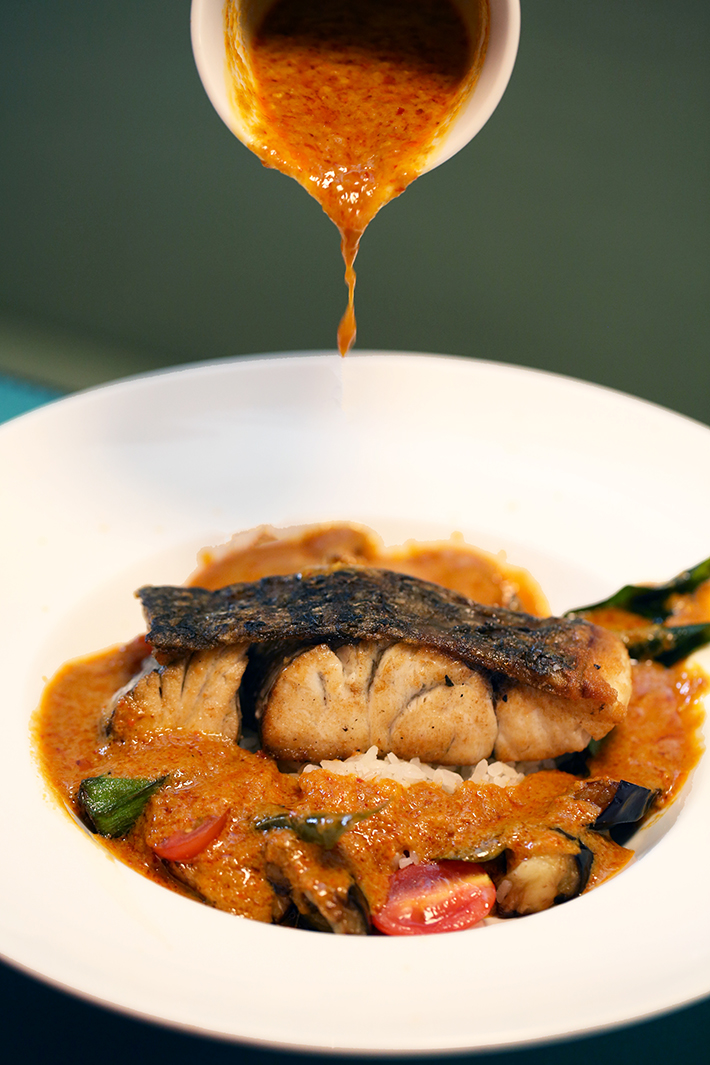 Beautifully robust with a heady aroma of warm spices which seemed to lean toward a tangier note—much like the classic South Indian fish head curry—, we couldn’t keep our forks to ourselves when it came down to their Curry Barramundi (S$28++).

Nestled atop a bed of Japanese rice and vegetables is a perfectly cooked barramundi fillet and served alongside the dish is the aromatic curry. An interesting choice of rice given that the dish is essentially Indian, the starchier Japanese short grain rice did well to hold on to the fish curry, providing an interesting texture along with a flavourful bite. Whether you’re a sucker for sweets or not, one does not simply leave The Marmalade Pantry without ordering up their Sticky Date & Toffee Pudding (S$14++). The epitome of luxury, this dessert for champions features a steamed pudding studded with ripe dates and is surrounded by a generous pour of toffee sauce and a large scoop of Cold Stone Creamery’s vanilla ice cream.

Sweet, sticky and indulgent from start to finish, this is one dessert that begs to be enjoyed after your meal regardless of how stuffed you are. 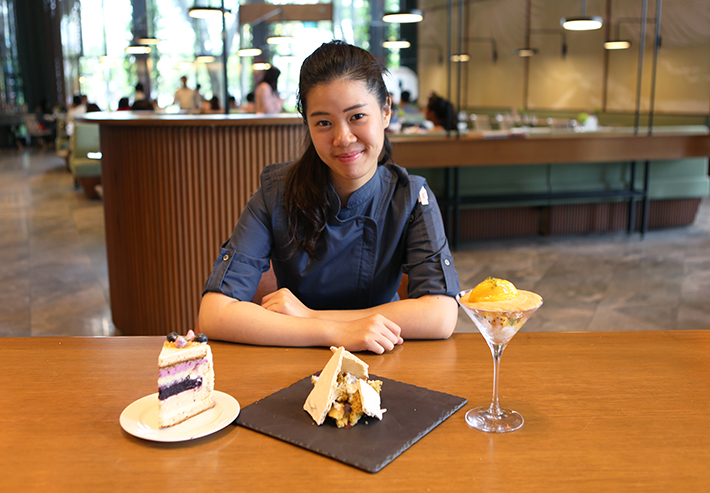 Exclusive to The Marmalade Pantry’s flagship at ION Orchard, be treated to a trio of decadence prepared by none other than Masterchef Singapore’s runner-up, Genevieve (Gen) Lee. Trained in culinary arts, the edge that Gen has is in her expansive knowledge of ingredients such as herbs and spices, of which she uses in her various cakes and desserts.

“Herbs are rarely used in desserts which is a shame because there is so much untapped potential there. I used thyme in my cake because it lends freshness to further lift the dessert.”, she explains. 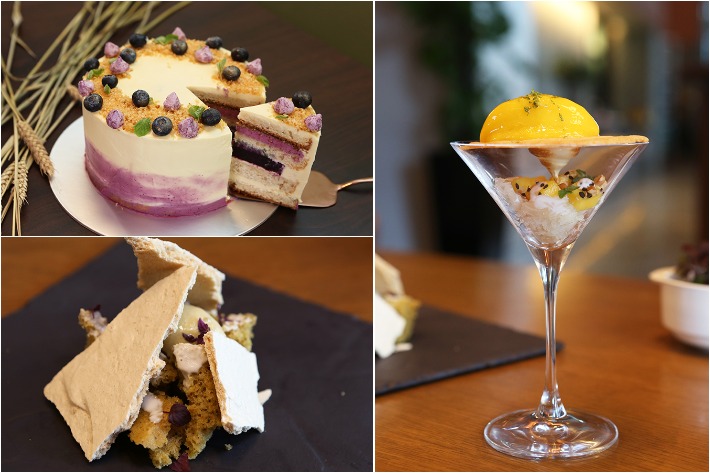 A taste of home, her Reimagined Kaya Toast Dessert is a deconstructed kaya toast with varying elements such as a meringue that comprises toast from Ya Kun Kaya Toast, a custardy, slightly salty coconut sauce to resemble the butter element and a pistachio sponge that accurately replicates the toasted, nutty flavours of charred toast.

If you’re a sucker for anything containing blueberries, her The Blue Rhapsody Cake will surely impress. Infused with lemon and thyme, the cake takes on an aromatic and bright-tasting appeal, which is further elevated with a layer of blueberries followed by a lovely hazelnut crumble on top. Wrapped around the cake is a layer of cream cheese that she sweetens using honey instead of sugar.

A specialty and one that warrants a try if you’re a fan of the iconic Thai pushcart dessert is her Mango Sticky Rice named Sunset in a glass. Intricately prepared, the dessert features components such as a sorbet made using Thai mangoes, an assortment of crushed toasted nuts, a toasted meringue, sticky rice infused with coconut and diced cubes of super ripe Thai mangoes. Since the day it opened its doors, The Marmalade Pantry has impressed many with its stellar array of afternoon tea delights. Luxurious in both its food and tea offerings as well as its luxe interior, stopping by for high tea between 3pm to 6pm daily is highly recommended.

Treat yourselves to their High Tea Set (S$60++) that comfortably serves two. What you get is a double-tiered platter comprising a variety of sweet and savouries followed by 2 pots of freshly brewed tea by Mongram Tea (Available from 4 March 2019 onwards).

Enjoy these new creations at the flagship outlet and enjoy 15% off when you pay with Mastercard! 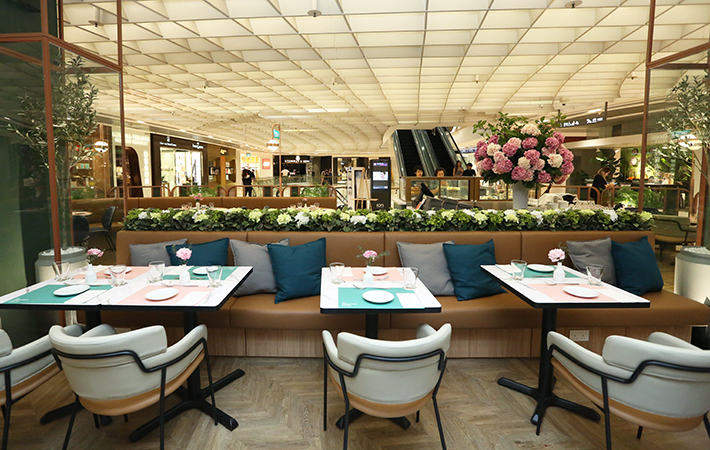 This post was brought to you by The Marmalade Pantry.