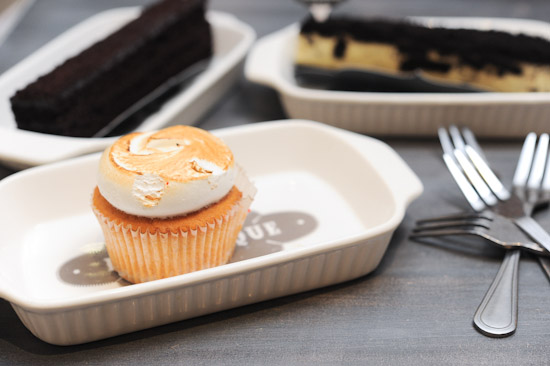 Besides Marmalade Toast at Takashimaya, another place that I like to go whenever I am in town is Pique Nique American Cafe by Chef Pang Kok Keong.

I am a huge fan of Chef Pang. I’ve tried almost all his desserts while he was at Canele Patisserie (under the Les Amis group). Boy was I excited when I heard that he left the group late last year to set up his own company, the Sugar Daddy Group.

Both Pique Nique and Anoinette (a French bistro-patisserie) are conceptualised by Chef Pang in his attempt to take over the dessert world in Singapore. I’ve been to both dessert places a few times so far, but more on Anoinette another day. 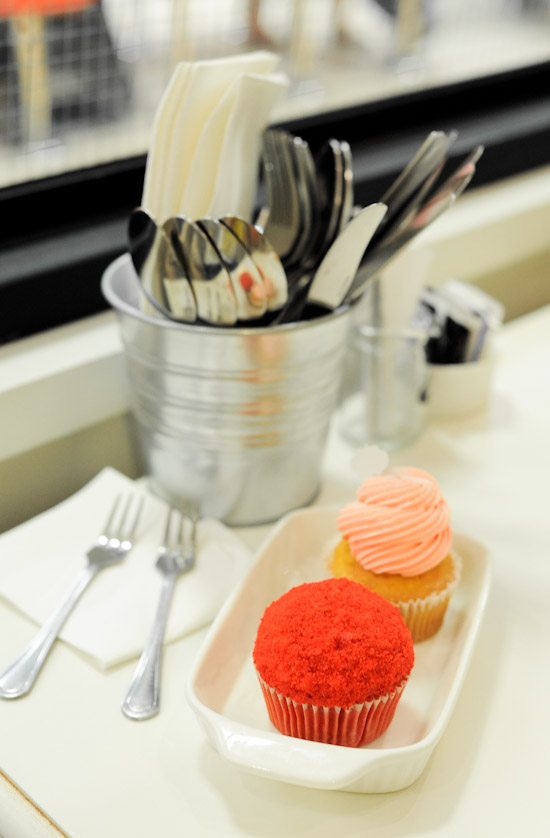 Among the desserts at Pique Nique, there are cupcakes with flavours like banana spilt, chocolate caramel, peanut butter, and carrot; cheesecakes like triple chocolate, American, oreo and strawberry; and an assortment of whoopie pies like maple walnut, caramel pecan, and peanut butter & jelly.

So far, I’ve tried the Lemon Meringue cupcake, Red Velvet Cupcake, Vanilla Cupcake ($4.8), Blackout Chocolate Cake ($8) and Oreo Cream Cheese Bar ($4.8) and Whoopie Pies ($2.15). While I don’t think they are fantastic enough to be listed as one of the  top 10 cakes in Singapore, I like that most of them are classic comfort desserts – ideal for afternoon tea. 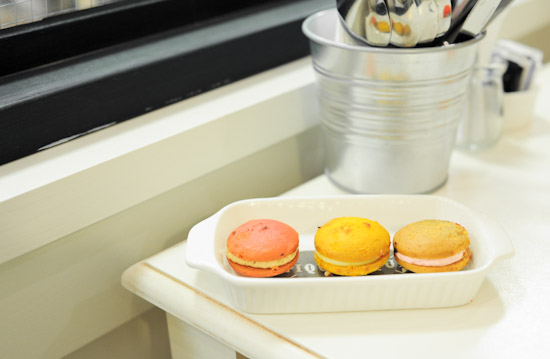 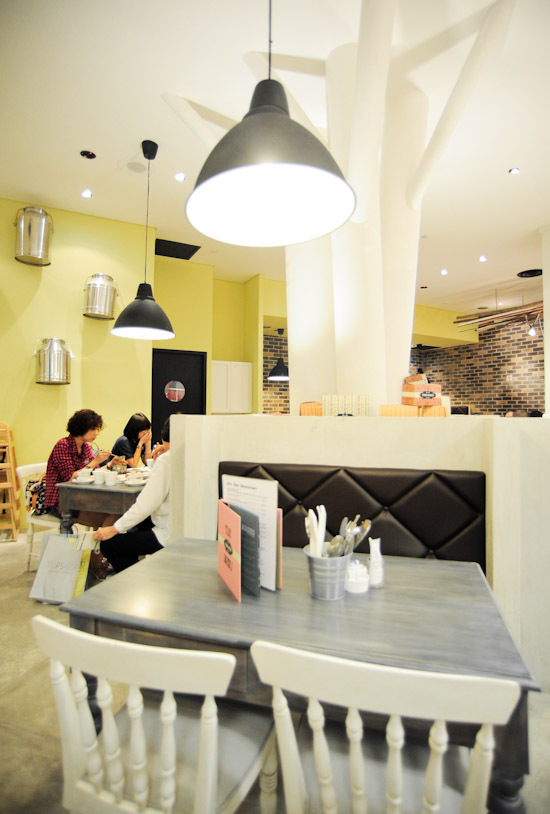 Pique Nique at Ngee Ann City is also one of the few places that serve all day breakfast in Orchard road. The American Favourite breakfast with two eggs served with homemade English muffins or white toast starts at $7.5, and there is also the popular eggs benedict that comes with Pique Nique’s special fries at $12. They also have French toast ($7.5), buttermilk pancakes ($7.5) and waffles ($13.5) on the brunch menu. 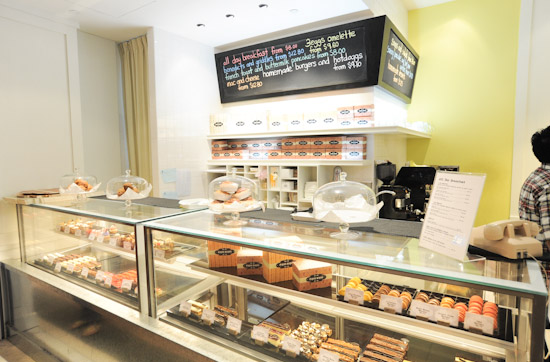 There are not many restaurants in Orchard Road that serve decent food at pocket-friendly prices, and Pique Nique is one those few places. The food and desserts are not fantstic, but most of them are reasonably priced and I will definitely go there when I want a light snack in between meal times.

Your pictures and write-ups are really good.

Ive been there once for breakfast and i dont think ill ever head back again. Given the price ( slightly on the high side in my opinion ) i would expect the standard of food to be at least decent ( its palatable at best ), i had farmer’s omelette and the dish turns out to be flat and blend, i wld sorta describe the taste as something straight out of a college cafeteria.

I had waffles with salted caramel and vanilla bean ice cream today! The waffle batter is heavenly!!
Also tried the sweet potato pie, not bad! The top layer of whipped cream was good and not too thick, even someone like me who usually avoids whipped cream at all costs totally finished it up happily

Went to the place to try out the breakfast, after reading this.

Honestly speaking, the eggs and toast did not live up to the price stated on the menu. We were served toast without jam or butter, egg without salt or pepper. Served with the wrong drinks… Served with syrup for our coffee and choc milkshake?

Maybe we had went there on the wrong day…

Went there with a couple of friends for brunch on a weekday. There were 5 tables occupied apart from ours, service was still slow. Food wise, nothing great to shout about. There are many other better nice cafes around town. Doubt I’ll make another trip there.

I felt compelled to write this because I don’t understand the bad reviews this place has gotten. Hungrygowhere rated this place 36% and I was a bit hesitant today to try it out but my friend suggested it after reading your (ladyironchef’s) review.

I’m so glad I went there despite the bad reviews on hungrygowhere! I had the buttermilk pancakes with salted caramel and eggs benedict. BOTH WERE AWESOME. The buttermilk pancakes were the right mix of whatever pancake batter is supposed to have, and the salted caramel splashed across it was the perfect condiment. It wasn’t too sweet — in fact, my friend with me was diabetic and tends to be very sensitive to sweetness but she loved it.

The eggs benedict were so awesome because the eggs were perfectly gooey. In fact, I feel that they were better done than the ones at Hatched (I’ve only ever had eggs benedict at these two places). The hollandaise had a hint of the lemon juice too, so it didn’t make the overall dish too ‘jelat’.

I had a cappuccino as well, and I guess my only ‘complaint’ would be that I wish they had decaf. The cappuccino was nothing special either, but perfectly drinkable.

So overall, I thoroughly enjoyed my meal there and would definitely go back again.

Right on that the cakes are not life changing. They were really disappointing. Over priced and of a really low quality. Am quite surprised especially since Antoinette serves good desserts!

I saw the review n decided to go try,take my advice n dun waste ur $18: I had the all day breakfast, the tomato was raw (aren’t they supposed to be baked?),the salad had too much oil,the eggs,bacon etc were so so,the coffee was totally undrinkable. It was so bad I had to post this to warn ppl off.

Tried their mini whoopie pies (I call them mini coz they are so tiny), the texture / taste is there but IMHO this small bake house called Whoopie Love in Toa Payoh near my workplace serves better whoopie pies (with a twist to the original Amish ones). Go for the ones recommended by iweekly – Chocolate Chocolate and Hazelnut Chocolate… couldnt believe so much flavour can be packed into a whoopie.

been there many times, but the visit on 3 april 2015 made me upset with rather bad service.
ordered carbonara, waffle with ice cream, sticky dates with ice cream, drinks. sound so nice right? but all came and served at the same time. Told the same lady who was the cashier as well, impossible to finish food and dessert at the same time. the reply i have got is “we serve them together normally”.
fine, keep my cool since it is a good friday. swallow all food really fast hoping the ice cream wont melt so quickly and yet the carbonara is still warm and nice…. recall back, i should have insisted she bring the waffle back and serve me a new one instead…. urgghh.