It was supposed to be January, but it is almost April soon! Well, like they say, better late than never! Forty-four was the magical number this time, and I’m glad to see many of my regulars, and of course our new friends.

We started with the simple appetiser, but I was too busy running from table to table that the calamari turned cold by the time I returned!

Dallas signature Quesadillas was one of the dish which I remembered from my previous visit. Tasting almost like a Mexican taco, there was chicken bits soaked with tomato in chicken broth.

There was some confusion when the ribs were served. The three different flavours of Fiery, Alabama & Smoked Hickory BBQ were too alike! Because we did everything in tasting portions, the pork ribs had to be cut and served this way, otherwise we were be there until four. 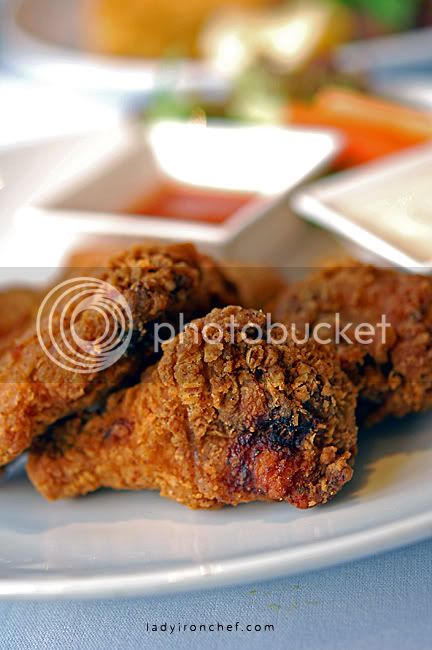 There was some feedback that the wings were too dry and lacked marination. 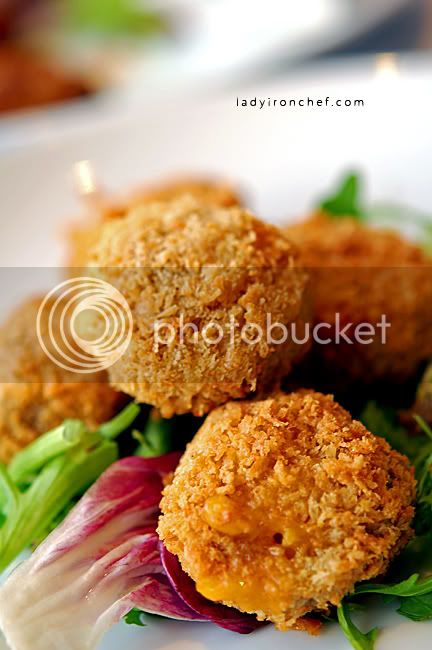 The “twin” brother which looked almost identical to the Corn & Crab Fritters.

A total number of 44 people turned up for this LIC food outing, thank you everyone! Like I’ve mentioned, there will be no date announced yet for the next lic food outing, I will try to organise it soon, so see you next time! I’ll also like to thank Jason, the owner for Dallas for hosting us.

I will be adding the group photos to my Facebook page later. Do add me there to see the photos!

Heh your photos also not bad what! Not as over-exposed as you say!

it was a really fantastic outing, i enjoyed myself tremendously, good to see my favorite people again hehe. thx for organizing brad, and cheers to more outings in future!

thanks for organizing the event. My friends and I had a great time …

Cool beans, when will you do a LIC outing in KL? It’s sure no mean feat getting 44 folks together for a makan session. Well done!

Life for Beginnerss last blog post..The Most Happiest Girl in the World

Oh dear, I notice the lack of comments for the subsequent dishes, guess you must be too busy that day to enjoy the food. Nice photos, the fact that you took it in an “express mode”…

Thank you for organizing the event and it was great and I am sure everybody has a whole lot of fun. Looking forward to the next food tasting outing…

hihi
i stumbled upon your blog when i search for hort park.
can i include your link as my favourite in my blog?

Our corn and crab fritters never came. And dry and lack of marination doesn’t even begin to describe the wings.

Camemberu: haha thanks but not my best. lol! catherine, its time to take the plunge again, get your macro lens!! its totally worth it

evan: thanks! ya la u all had fun over the other side, sit so far away from me. haha

debbie: hahahaha thanks, you always bring the most friends to my outing. heh

life for beginners: lol! I should go to KL for the food outings u all always have. everyone looks so happy and fun man. we should do a cross-straits outing, you all come to Singapore, den we all go to KL. ha

Fen: lol! yeah too busy running about. thanks for coming, and brining two dslr! haha

dancingkueen: sure you can, thanks for adding me

feizhu: oh dear, well like i say i can’t control the food

well like i said, i wasn’t counting on u for even being able to sit down, so what difference does it make even if we sat near you? HAHA. but yes we had fun without u around *bleh*

and, i still admire you. for running about. hehe

congrats on the great event! i heard it’s yr blog’s anniversary too! happy blogoversary and keep feeding us with yr excellent shots! ;D

We didn’t get the corn/crab fritters but we didn’t ask for them cos we had enough of fried stuff.

Thanks for the outing LIC!

Evan: hahaha ok next time do smaller outing so dont need to run about!

Nic: hahaha thanks dude. yeah all of a sudden its two years already!

Bobo: oh i see. thanks for coming pet, it was a pleasant surprise when you walked to the back and find me. heh

No offense but even though you don’t control the food, there is an implied responsibility. Shrugging off responsibility is definitely not the way to go. Please dont be mistaken. I am not blaming you. I am just letting you know about the implications and repercussions. I hope you realise that its easier to change reality then to change perception.

A cross-straits outing sounds great! Last time I was in Singapore, I had the pleasure of being taken for dinner by Keropokman and his lovely Momo. Can’t wait to have the Singaporeans over to KL too!

Life for Beginnerss last blog post..The Most Happiest Girl in the World

Life for Beginner: hahahah! Keropokman and momo came for Dallas too! Let me know the next time u come over, den we can organise a outing. heh.

i liked dishes no. 2 & 3, and the third level of the place (: but the event was a little segregated in terms of people arrangement, so there wasn’t much interaction except within our own tables..

elaine: hmm.. if you are coming in a group of 4, it will be kind of hard to know new people unless u all spilt up. for those in 2, i put two pairs together and I’m sure they have fun. Also people need to take initiative to walk around to interact, much as i will like everyone to make new friends, there’s nothing i can do if they dont take initiative : )

it was my first time attending LIC’s food outing and i had a great time! gotta know two new friends who were at the same table as me. =)
great job brad!

zay: hahah thanks for coming with your sister! glad you all had a good time

i msut say that organizing is nv easy and i personally think brad is doing a pretty gd job already.

Thanks Brad again for organizing the event, I had fun

EteL: thanks for your support! see you next time yeah : )

once again shrugging off responsibility. event organiser should Take The Initiative to facilitate a ice breaker session. fail.

eh dun have group photos leh. where where?

Okey dokes, sounds good! I’m thinking one of these weekends before I fly off to UK for my vacation in May. Ahoy, Lion City!

skcuscil: thank you for your feedback, each food outing is a learning lesson for me, i will improve on it for the next one : )

maureen: haha be patient la, i will upload to facebook soon.

Life for Beginners: yay! come, come to the food paradize

hi brad, great photos..though i didnt attend, understand you must be put in great deal of effort to put everythg together..

anyway, One man’s meat is another man’s poison , so it’s definitely not your responsibily (or even impossible) to ensure everyone luvs the food..

good job anyway..hope to join one of your trails very soon

doraemon: thank you for the encouraging words! yes hope you can make it for my next outing which will most likely be at the end of april : )

Wow you’re on the other side of the planet from me, but that’s my home town cooking there!

Floyd: Nice of you to drop by! Hello from the other side of Earth

waiting on the next one!

judy: hahaha no worries, there’s always next time! i’m a bit busy to organise one now, but will try to do it asap!