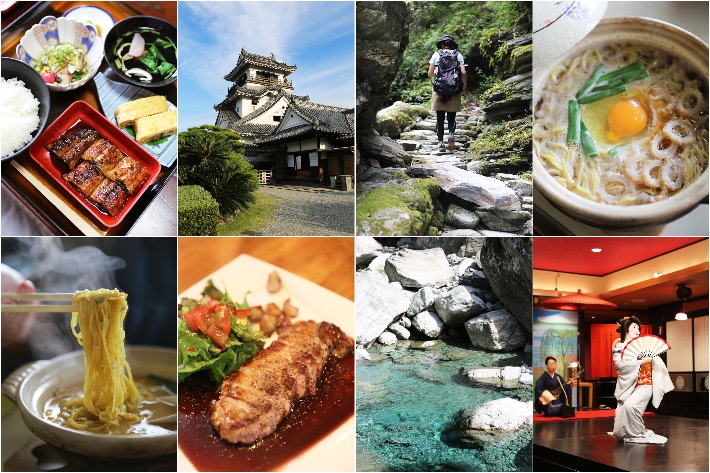 Located on the island of Shikoku, Kochi is rather out of the way for many which are what deters tourists from visiting. But what this humble area in Japan treated us to was nature in its most pristine form and its fascinating yet exciting drinking culture.

Kochi is blessed with beautiful and abundant nature such as the Shimanto River, Niyodo River and the Kuroshio coastline. From clear-blue lakes to autumn leaves and silhouettes depicting a never-ending sea of mountains, Kochi truly impressed us from leaf to pebble.

And when it comes to eating and drinking, these folks are anything but simple. Drinking alcohol is a huge deal here and eating good food is more of a lifestyle here rather than a necessity—something we can definitely resonate with. Bonito, a close relative of tuna and mackerel, is also hugely popular here and can be found in literally every restaurant and izakaya.

We had a lovely opportunity to go on a 5D4N adventure through Kochi, seeing and experiencing all sorts of fun things, eating amazing food and even getting hands down to make our own paper and harvest our own sea salt. For the curious traveller, here are 12 reasons why Kochi has to be on your next Japan itinerary. 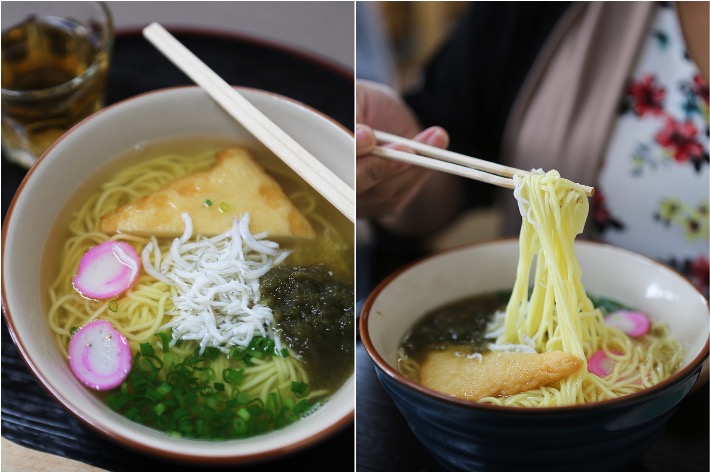 Specialising in soba, Tosawo Shoten is an excellent place to begin your trip proper as their delicious yet modest bowls guarantee comfort that nicely combats the cold, and gives diners a proper introduction to some of the prefecture’s local delicacies.

Unlike the soba dishes we’re used to, we had ours in a soupy broth made using a light dashi and further intensified with whitebait—a predominant ingredient used in many of Kochi’s esteemed dishes—with a few slices of fishcake added. This type of broth is commonly used in udon rather than soba. 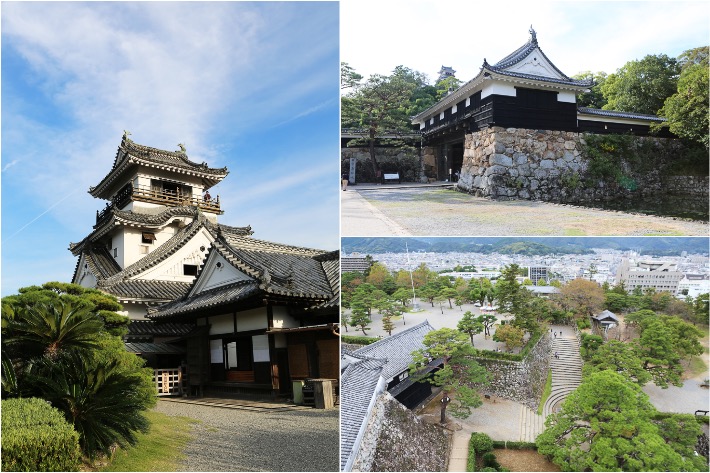 Kochi Castle is one of the few remaining original castles in Japan to have survived both the Edo and Meiji eras and is worth a visit to gain a deeper understanding of Kochi’s history. Much of the castle itself has been demolished but it still remains pretty well preserved nonetheless, in fact, Kochi Castle is one of the only 3 castles left in Japan that still has its main gate fully untouched. 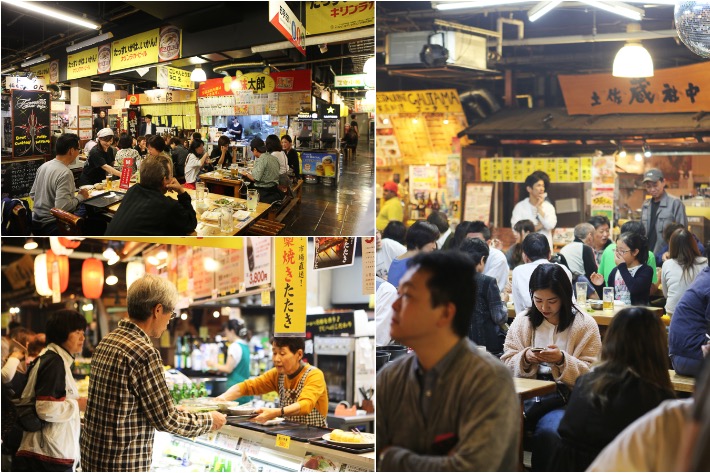 When visiting Kochi, it is paramount to pay a visit to Hirome Ichiba at least once (or thrice) for a meal. Similar to the hawker centres we have back home, this unique market located in Kochi’s city centre that houses over 60 stalls, many of which are either hole-in-a-wall restaurants or izakaya. The vibe and energy here is amazing and literally everywhere you turn, you’re likely to see locals socialising, eating, drinking (a lot) and having a swell time.

Many stalls there serve beer, sake, and shochu in addition to food, so having a drink together with your finger food of fancy is highly recommended. 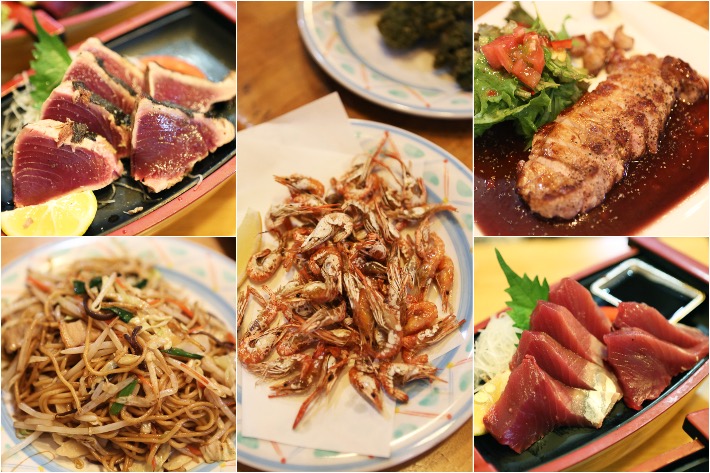 The food options here are plenty with bonito being one of the more prominent items on display. We went for a pretty good selection of fan-favourites which included grilled Shimanto Pork, Bonito, Tuna Sashimi as well as a local river ebi that’s deep-fried and enjoyed as a beer accompaniment. 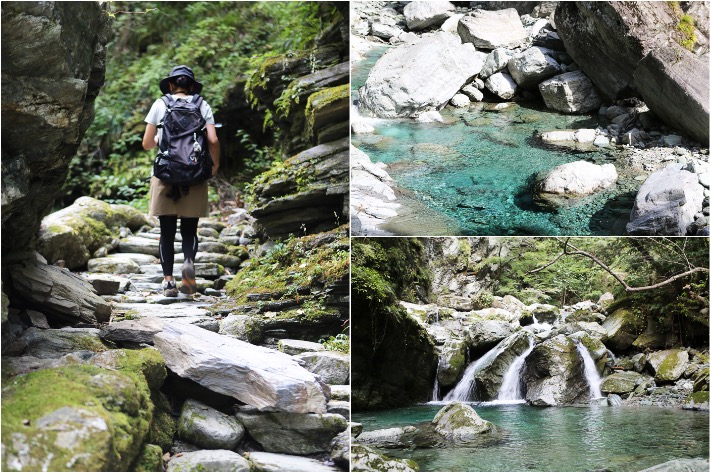 A treat for the senses for any nature lover, the Niyodo River is something to definitely check out. The water takes on a blue-hue which is partly influenced by the naturally bluish rocks at the base of the river and the water itself is crystal clear.

Walking through the forest and toward the Hiryuu Waterfall, the experience was one filled with tranquillity and relaxation. Coupled with the autumn breeze on our backs and surrounded by the multicoloured autumn foliage, appreciating nature never felt better. During the summer, many people drive down here for picnics and barbecues and even make it a point to take a dip in the river. At Miyanomae Park during autumn, bask in a sea of pinkish beauty at the Cosmos Festival, a celebration of the flowers of the region in full bloom. During the festival, there are also food tents set up, allowing you to get your fill of some local cuisine as well as a series of performances for visitors. 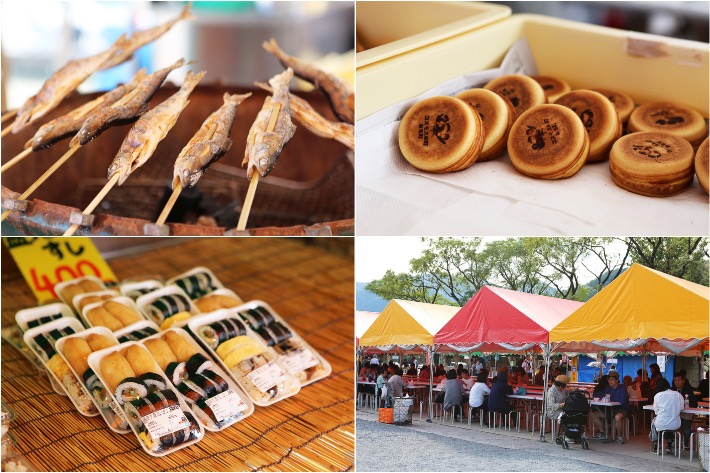 Patronised heavily by young couples, this scenic spot is great for photos and would make for the perfect backdrop for a gorgeous couple photo for the ‘gram’. 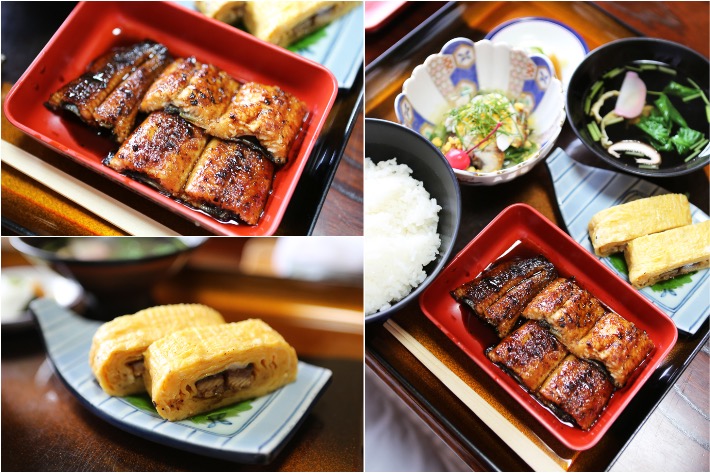 Just a short drive away from Miyanomae Park is 106-year-old unagi-centric restaurant Taisho-ken. The restaurant is currently run by 4th generation owner, Mr Masahiro Wada, who makes it his life mission to perfect the art of serving proper unagi cuisine the way his family has been doing it for over a century now. He claims that he is still far from achieving that, but we beg to differ.

Choosing the lunch set allows you to savour unagi in 3 different varieties—grilled, slathered with tare and served over rice, cooked within a tamago, and in a salad. Grilled to perfection and glazed in that perfectly balanced tare, we dare admit that their unagi is one of the best that we’ve had. Make no mistake, making the trip down for a meal here is well worth the journey, the time and the price. 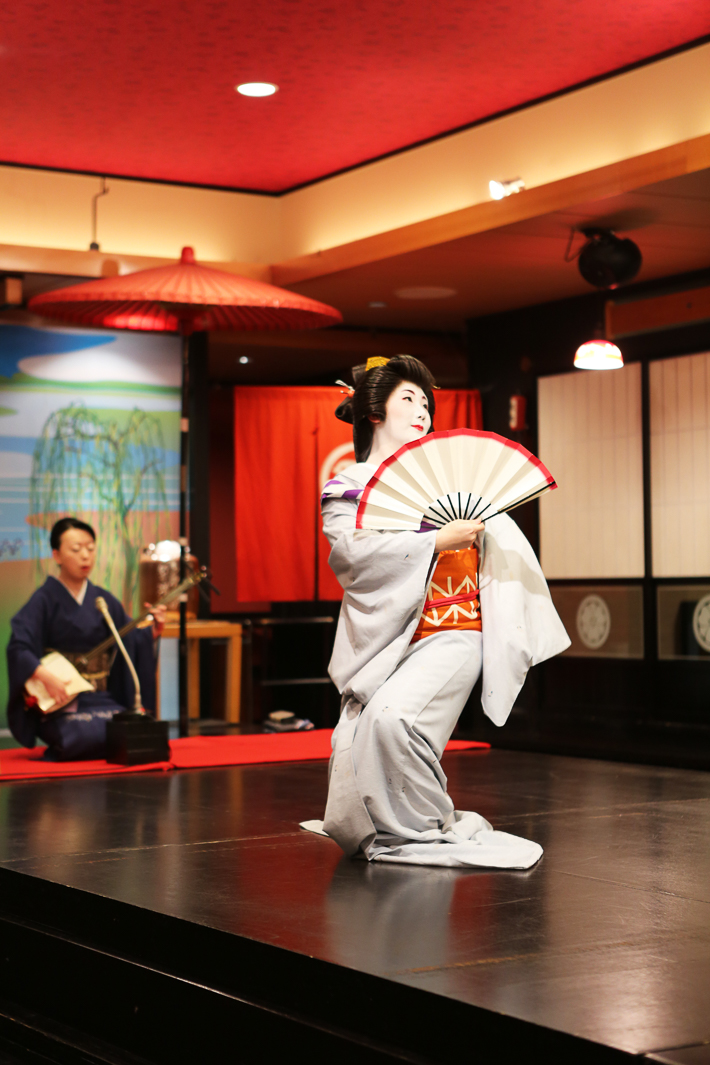 HAMACHO – DINE AND BE ENTERTAINED BY A GEISHA

Geishas are a dying tradition in Japan and nowadays you can literally only find a number of actual ones that still exist—under the radar of course. Yet, over at Hamacho, a traditional Japanese high-class restaurant, a number of geishas are still allowed to perform, drink and interact with guests. The food served here for 1 or 2 people is typically kaiseki, a massive platter of individual small components featuring a host of Kochi’s local delicacies and seasonal produce as well. But should you dine in a bigger group, they would serve a sawachi platter which is much larger.

Our behemoth of a platter comprised several types of fish, seafood and even whale. Fancy the opportunity to play games and drink with a real-life geisha? Feel free to express your interest to any of the staff and they will gladly come over to entertain you. However, language is a barrier so you may need an interpreter. 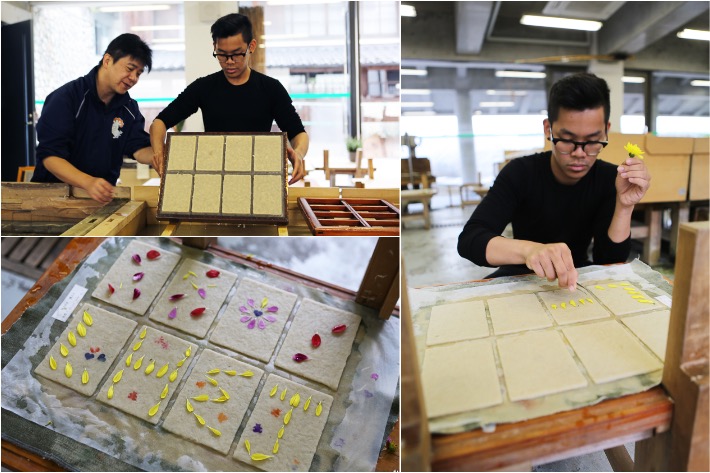 Paper plays a big part in all of our lives—well, before computers and tablets anyway—but how often does anyone stop to wonder how the stuff is made? In Japan, paper-making is more than just a means of generating income, it’s an art.

If you’re someone artsy and enjoys getting hands-on, we reckon that paper-making will definitely be right up your alley. Over at hotel QRAUD Tosawashi Kogeimura Hotel, they offer a variety of workshops with paper-making being one of them. 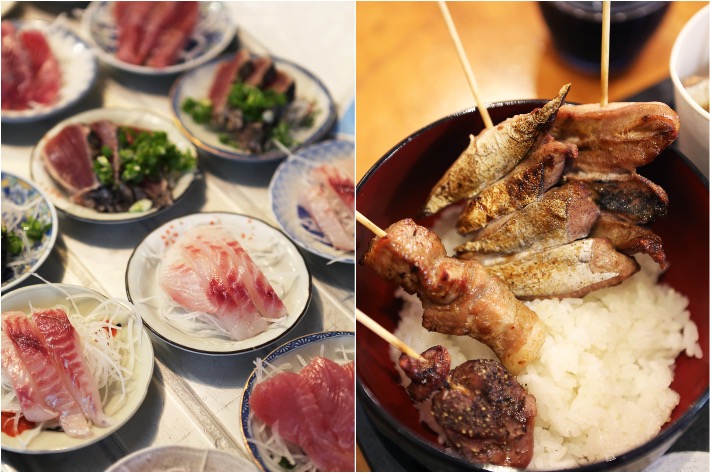 Perhaps Kochi’s very own, smaller scale Tsukiji Fish Market, what this seafood market offers is truly a treat for any seafood or fresh fish lover. The concept is pretty much the same in that you go around selecting your item of choice and choose whether you wish to have it sliced in sashimi form or grilled with some light seasoning. There are also many other stalls selling grilled meat skewers and other types of tidbits.

Kure-Taisho Market has gained considerable popularity over the years with many people from all corners of Japan flocking over to have a taste of their bonito. Salt is such a vital seasoning and is what makes food tasty. Yet, back home we never ever think about how salt is made since the majority of the time we depend on store-bought ones. Over at Kuroshio Town, residing along the vast and beautiful coastline are small family-owned facilities that devote themselves to the craft and art that is sea salt harvesting.

The particular place that we visited called Tosa no Shiomaru specialises in ‘sunshine salt’, which is naturally derived sea salt harvested using only sunlight and the coastal breeze—nothing else. The experience itself was a rather fascinating one as we were taught how about the fundamentals of salt as an ingredient and how different the effects and taste of salt can be depending on the amount of tampering it receives. 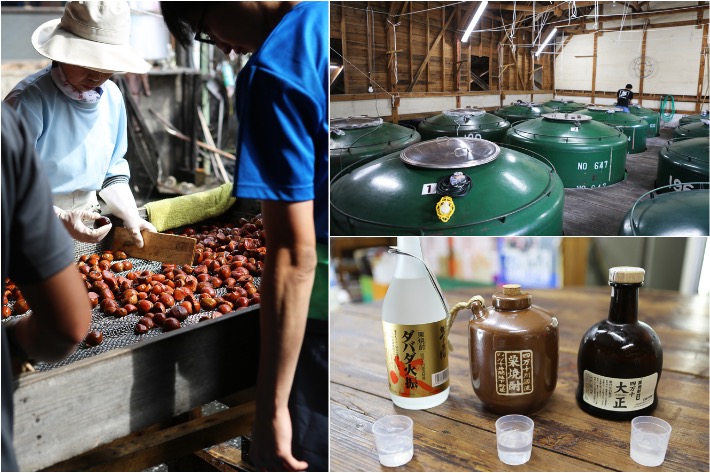 Everybody knows sake to be a rice-based wine and one synonymous with Japanese cuisine and Japan’s culture. At Mutemuka Sake Distillery in Kochi, they take a slightly different approach to making theirs, using locally grown chestnuts in addition to rice.

The flavour derived from Mutemuka’s chestnut sake is a lot more complex than regular, purer sakes in that it takes on a distinct nutty aroma coupled with a subtle savoury aroma. We had the pleasure of sampling a few varieties of their sake and of course, had to buy a few to take home. 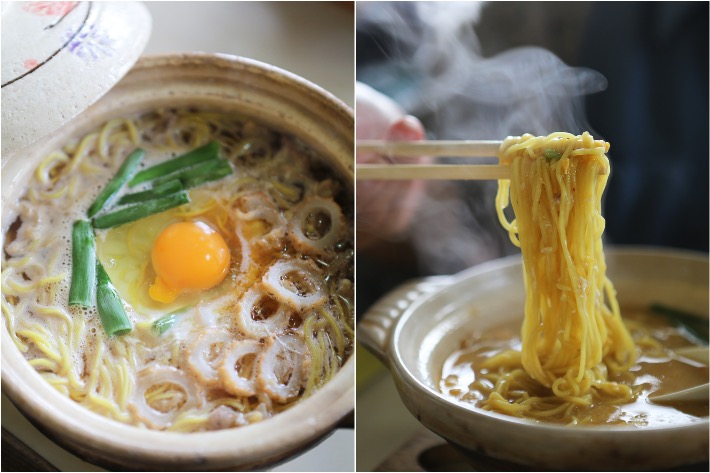 There are so many amazing flavours that one can unlock out of food simply by cooking it in a claypot. For one, its primary benefit is that it locks in heat in for a longer period of time, allowing food to stay hot longer and more importantly, lets the ingredients develop more intense flavours. The same can be observed in many Chinese dishes, and therefore comes as no surprise that cooking ramen in a claypot will guarantee one heck of a rich, multi-dimensional flavour profile.

You will find many places selling nabeiyaki (claypot ramen) all over Kochi but the one that we visited—which we strongly suggest you do too—is Chiaki Nabiyaki. The standard nabeiyaki comprises rather simply, tender yet firm egg noodles, bits of fish cake and an egg cracked over top right before serving.

As expected, the flavour was intense but balanced well enough such that it didn’t become difficult to gulp down and the egg stirred in not only thickened the broth but also added a heightened richness to the overall dish. A brilliant alternative to izakaya-style ramen and one that we highly recommend trying when in Kochi.

This post was brought to you by Kochi Tourism Board