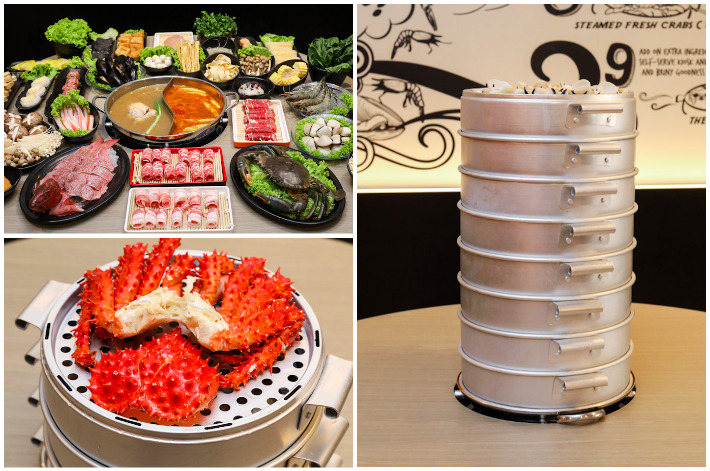 This unique moniker—Captain. K—can be interpreted in two ways. You can analyse it as K for anything Korean or K for Kenneth, the down-to-earth former Marine Chief Engineer turned F&B owner of this speciality seafood eatery.

Fit for all sorts of communal gatherings, corporate events and special occasions, the ambience of Captain K is rather cosy with the ever-ready staff always at hand to tend to your needs and requests.

Everyone knows Captain K for its multi-tiered Seafood Tower and you bet we love that too. But the humble eating—famed for its extremely fresh seafood—is introducing hotpot in its menu at its Middle Road outlet on 01 November 2017 and the prices are very reasonable for the quality! 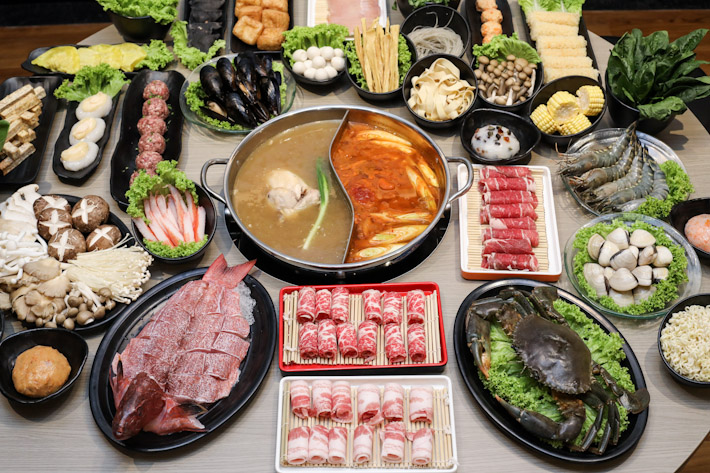 Now you have more options for communal dining at Captain K Seafood Tower. We share with you our favourites from the hotpot menu, as well as everything we love about its signature 9-tier Fresh Seafood Tower.

Supper goers will be delighted to know that Captain K’s Middle Road outlet opens until 4am every day, making it the perfect supper spot in town.

PS. For the month of November 2017, simply quote ‘Ladyironchef upon making your reservation to enjoy a whopping 30% off Captain K’s hotpot and an even better 40% for orders after 10pm—valid all day, every day. This promotion is not valid for soup bases as well as seafood. 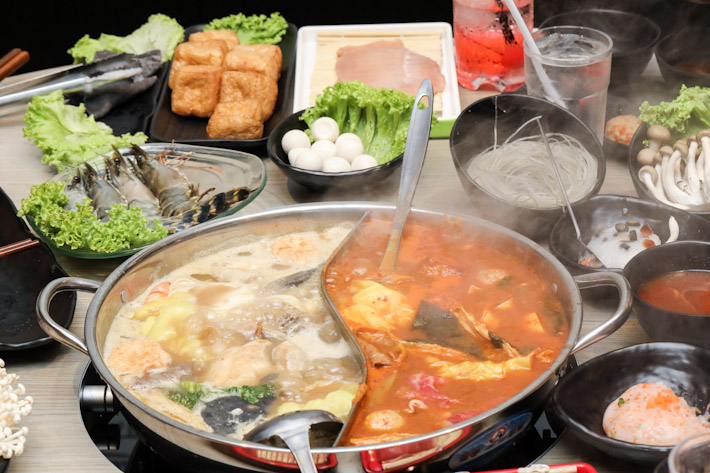 Come 01 Nov 2017, Captain. K will introduce its exclusive hotpot, giving you even more variety now. After narrowing down your two soup bases (Kombu Dashi is the sixth available option), take your pick from a slew of over 97 steamboat ingredients that feature dumplings, homemade balls, signature pastes and of course the premium seafood list.

Soup bases are priced at one for S$16 and two for S$20, with a supplement of S$4 if either of your option includes Ginseng Chicken. 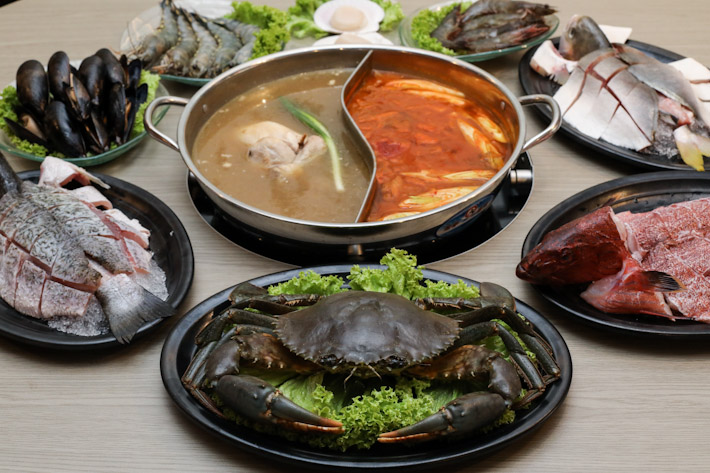 Half and full portions are available so that you do not over-order (or under order). The exhaustive list of ingredients sure drove us crazy! We were hooked on the Fried Beancurd Roll (S$4/half, S$8/full) that gave a lovely crisp—but the tip is to only dip it into the bubbling soup for 3 seconds. It was really addictive, to say the least!

The abalone (S$15/half, $30/full) was also stellar along with the Red Garoupa (seasonal price) that captured the essence of the hearty broth infused in its soft, flaky white meat. 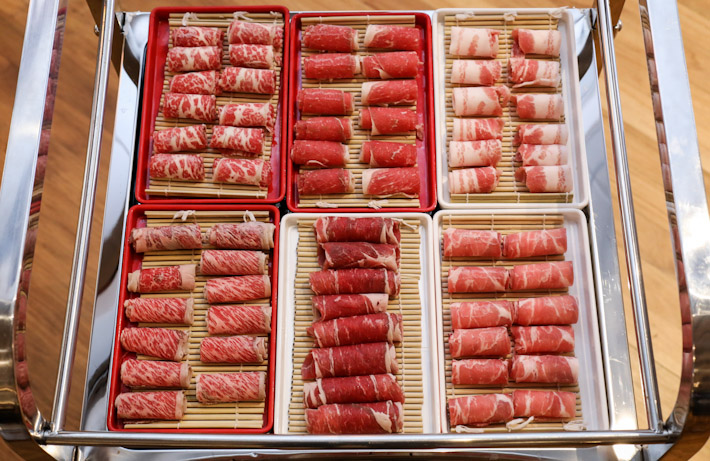 For all the carnivores out there, let the tender Sliced Lamb (S$8/half, S$16/full) and the US Wagyu Beef Chuck Roll (S$12/half, S$24/full) leave you grinning from ear to ear. There is also a stellar variety of pork but we say you go straight for the US Kurobuta Pork Belly Shabu (S$7/half, S$14/full).

And the meat party doesn’t stop there. You must try Captain K’s Homemade Balls. Every meatball is huge and substantial, making it more filling than it looks. There is the Assorted Meat Balls Combo (S$11) for those who want the best of all worlds. We absolutely enjoyed the Beef Meat Ball (S$5/half, S$10/full)!

There is a range of Homemade Paste too; from Ebiko Prawn Paste (S$16) to our favourite Century Egg Fish Paste (S$10). Captain. K certainly does not compromise on the quality of their seafood and meat; we were thoroughly impressed with our meal, to say the least. 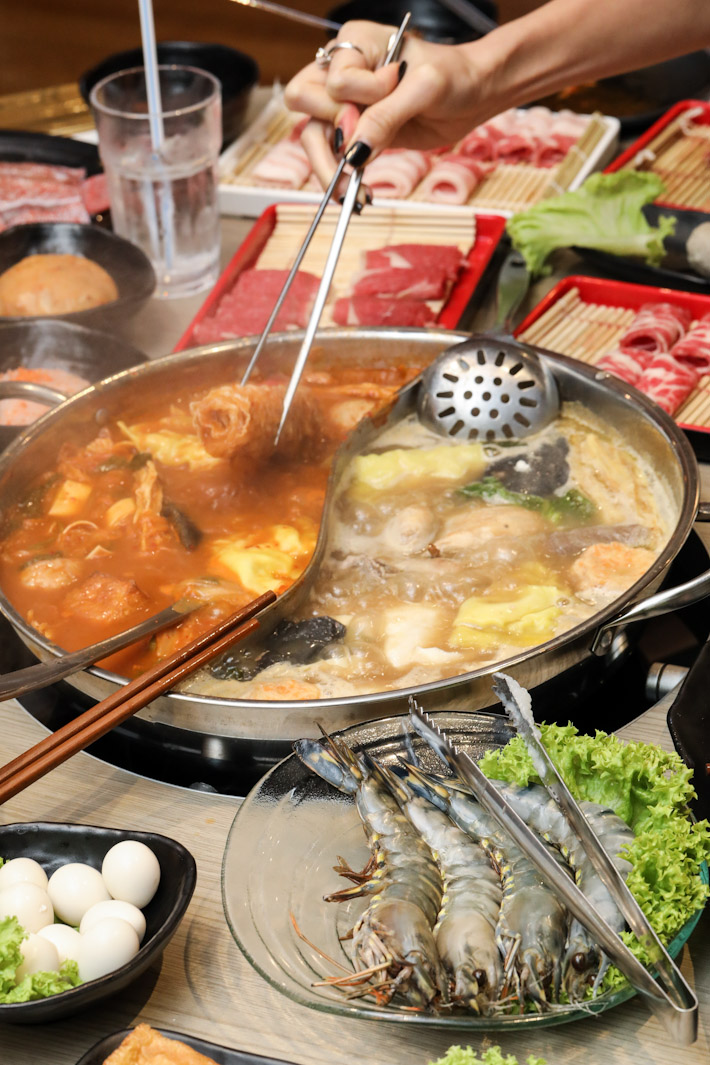 A fuss-free seafood extravaganza awaits at Captain K and it is a location that is suitable for all occasions, be it for parties or a family dinner. As crowds peak during dinner, be sure to swiftly make reservations for your gastronomic seafood delight.

For the entire month of November 2017, quote ‘Ladyironchef’ upon making your reservations to enjoy a 30% discount off your hotpot meal, and a whopping 40% if you dine after 10pm. This promotion is not valid for soup bases as well as seafood. 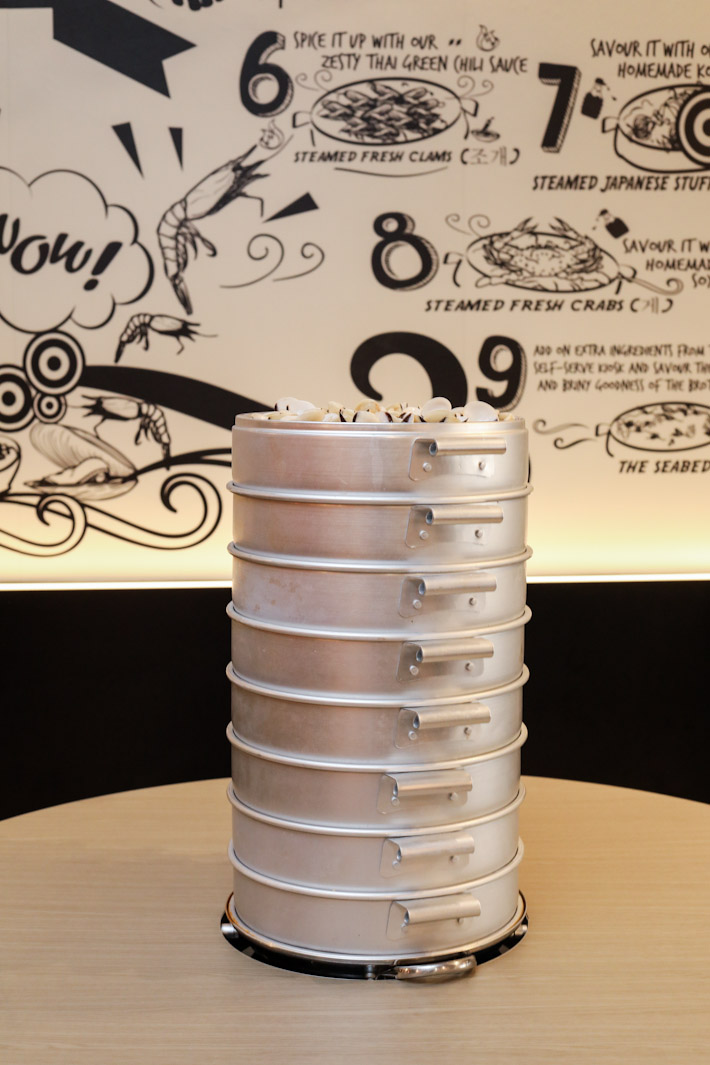 The famed nine-tier Captain K Seafood Tower has indeed taken the food scene in Singapore by storm. Comprising nine staggering steamer trays stacked atop each other, each level is steamed to absolute perfection all thanks to a treasure trove of natural seafood juices and briny tang, in combination with the simmering hearty broth at the base. 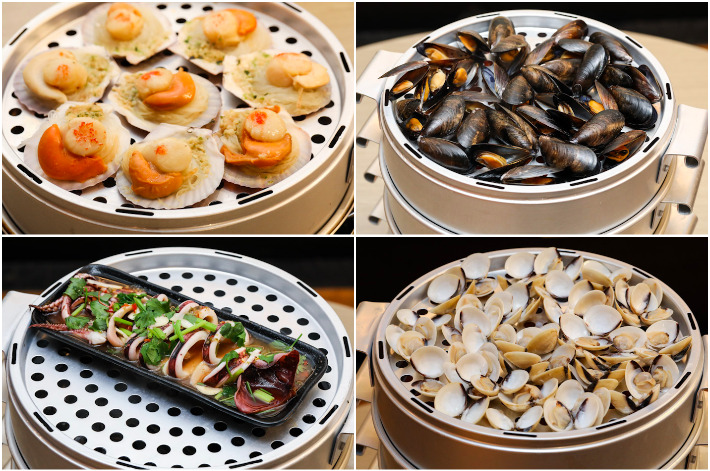 From mussels, scallops, clams, crawfish, oysters, prawns, squid and Chilean King Crab, the key to what sets this seafood eatery apart lies in Captain K getting the freshest seafood from its suppliers at Senoko Fishery Port daily. Do note that the variety of seafood may vary according to the catch of the day.

You can choose from 5 distinct soup bases that best cater to your palate: Korean Kimchi, Tomato, Sze Chuan Mala, Tomyam Mushroom and Ginseng Chicken. All are priced at S$12 each except for Ginseng Chicken (S$18) with glutinous rice stuffing that represents a premium selection.

We highly recommend the made-from-scratch Tomato option for a novel yet tantalising experience. We were sceptical initially but realized that the soup boasts surreal hints of sweetness, which perfectly counters the strong tanginess that stems from the bold tomato flavour. 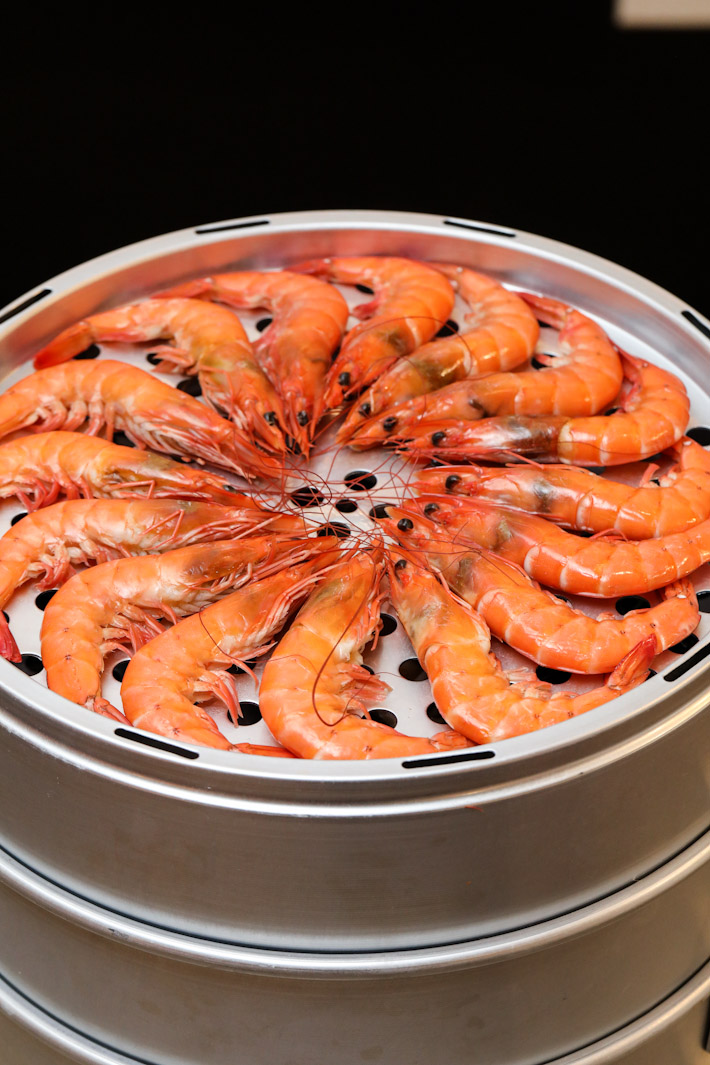 Highlights of the Captain K Seafood Tower (S$328.90) includes the luscious Prawns that are plump and sweet.

The oysters also lean away from the usual briny taste and offer a memorably sweet yet light flavour. We were pleasantly surprised by this! 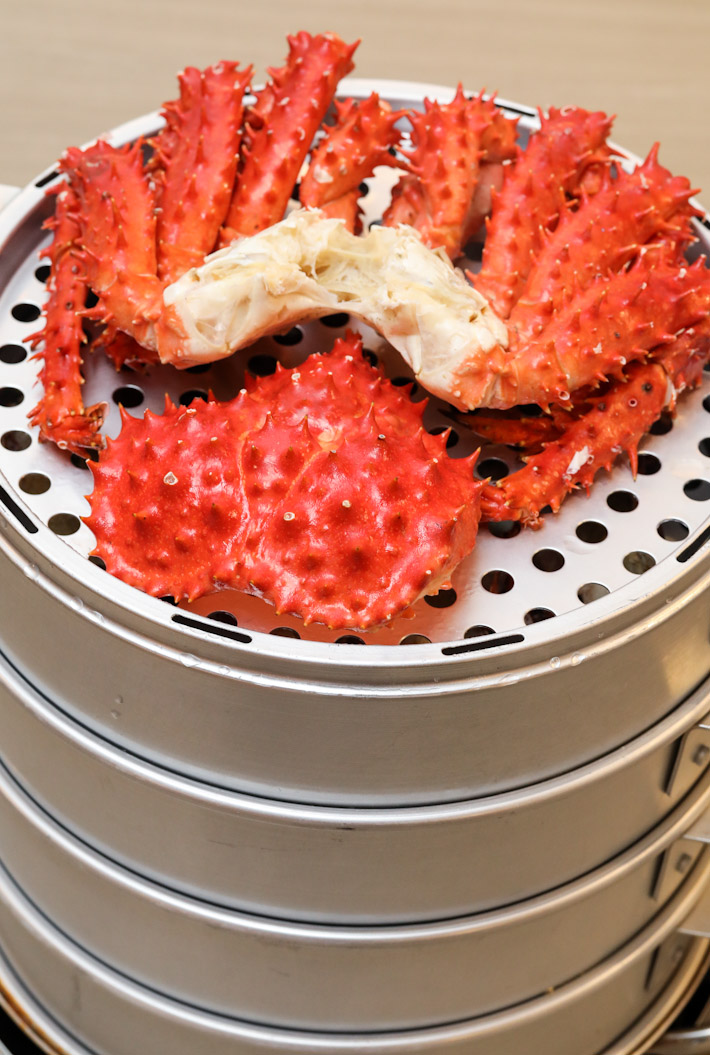 However, the showstopper goes unanimously to the Chilean King Crab. The succulent pieces of crab meat are unparalleled and the taste is elevated when you pair it with the homemade Thai Mookata dip.

Whether you show up as a party of two or intend to have a mass family reunion, there is a tier for everyone. A three-tier option (S$59.90) with clams, mussels, prawns, oysters and scallops all in the crustacean mix is ideal for a pair. 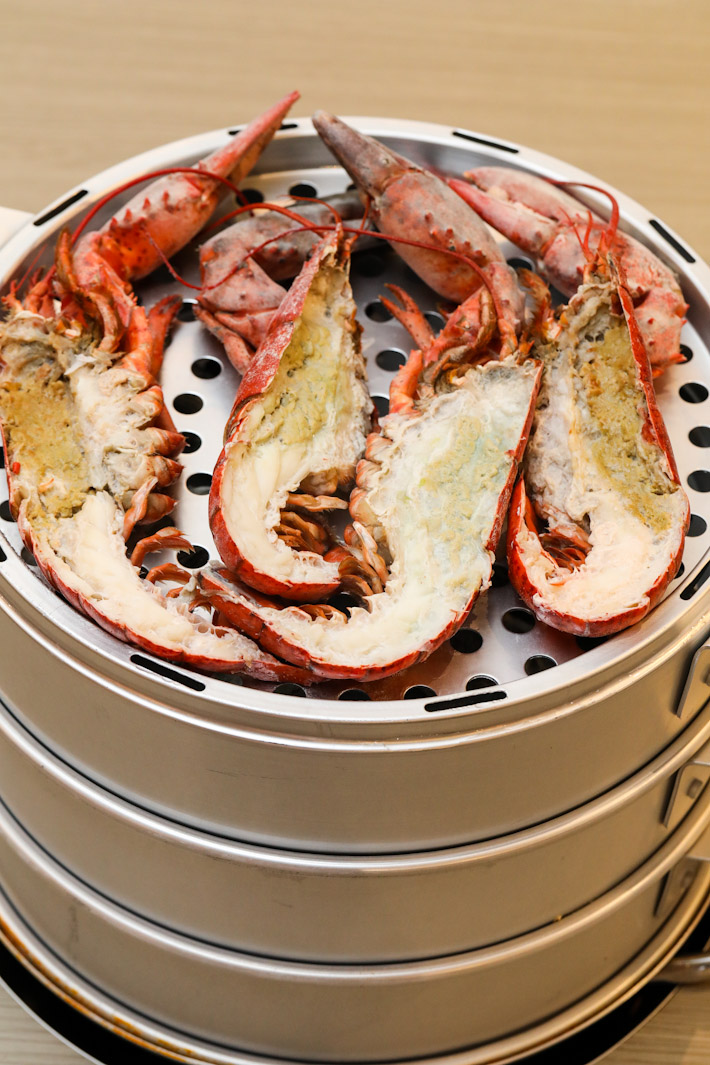 If you upgrade to a five-tier tower (S$118.90), you get tiger prawns in addition to the three-tier seafood selection. The portion increases proportionally as well. Go jumbo with the seven-tier tower (S$198.90) and enjoy a serving of squid along with all the other aforementioned seafood.

Once you have massacred the tower and reached the soup base, you can also choose from an array of ingredients to add to your flavour-packed soup. The plates are colour-coded starting from S$2 for the yellow plate all the way to S$8 for the deluxe black plate.

And guys, can we just repeat how much we enjoyed the premium nine-tier tower? The price may sound shocking at first but if you go work out the sums and split it among eight people (because it is good for eight), you’d realize that you are getting a lot of value and premium seafood for the price you are paying. Just gather your best friends and go for an epic seafood party!

This post is brought to you by Captain K Seafood Tower.

Utterly disappointing. Even instant noodles have better tomyam soup base. After telling them the tom yam soup base is too sweet, they added lime and ask if it is ok? It was worse and we have to tell the staff, did you even taste it before asking us to try again, as it now tastes like lime juice. Ingredients was cheap quality and definitely overpriced. only 3 tables on a Sunday dinner. It is self explanatory.