Blogging has given me the chance to try many new things – from travelling to different cities, to meeting many amazing people. Albeit one of the things that I’ve always wanted to do, but never had the chance is to bring people on a food tour.

When I was in Resorts World Genting in April, I discussed it with the folks in charge. They were quite excited about the idea of bringing my readers to try the best restaurants in Genting, but it was only when they confirmed the news a month ago – then it struck me that the food tour was finally happening.

Last month, I brought a group of 33 people to Genting for the food tour and I am happy to report that it was a very fruitful trip. Genting, to me, is my second home, and I was really excited to show everyone around. Read more to find out what we did!

Also, we might be doing a second food marathon to Genting in September. For those of you who are keen to join me, please leave a comment (using a valid email address) at the end of the post so that I can contact you when we have more details.

After arriving in Genting, we had a few hours to spare before our dinner at Genting Palace. Some of us took a quick nap in the room, while others decided to explore the area near First World Hotel, where we were staying. 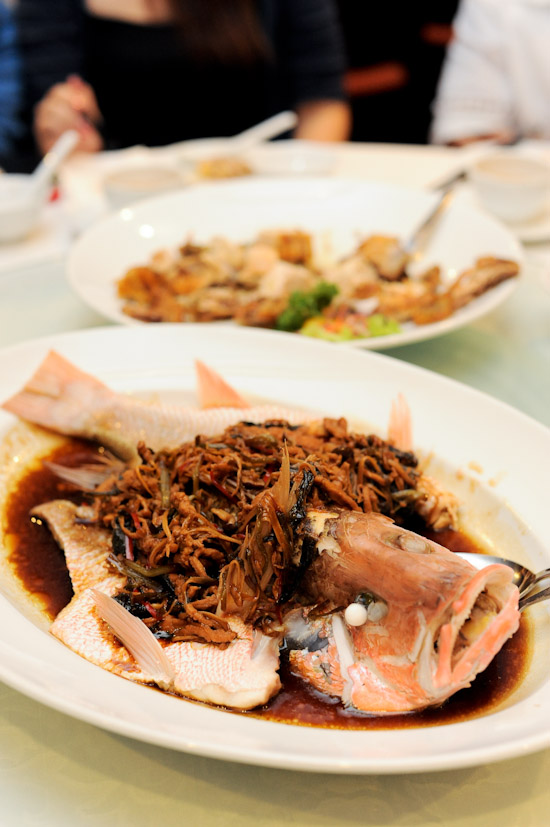 When it was time for dinner, it was my first test for being a tour guide. To sum it up: it was not an easy task. One of the challenges was to make sure that everyone was present (and on time). Not to mention that I had to remember so many new names and faces. That being said, I thoroughly enjoyed the experience and it became easier along the way. 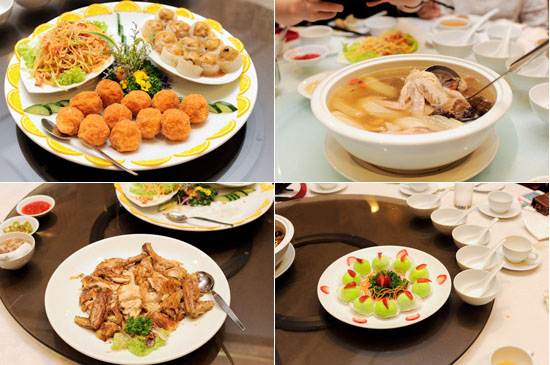 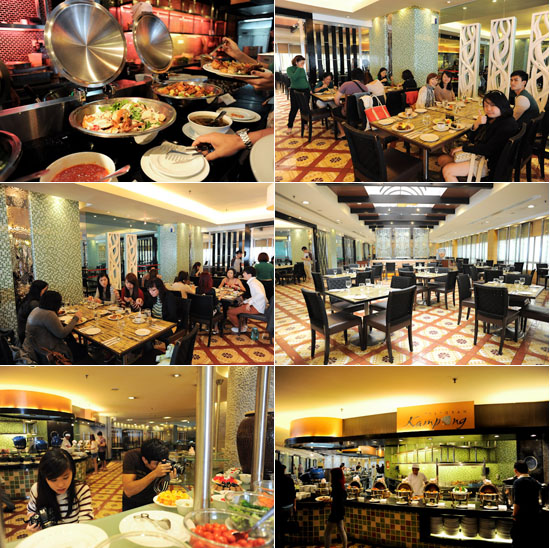 The next day, we went to Resort Hotel for breakfast. The best thing about eating here is having the luxury of savouring two distinctly different cuisines under one roof – you can have the international feast at Resort Cafe where they serve a wide selection of cold and hot dishes; and at Kampong Cafe, there is a good mix of muslim and Indian food. One thing you cannot miss though, is the signature teh tarik. Even though this was a food tour, it was impossible to eat nonstop for the whole day, so after a heavy brunch at Resort Cafe – where we had international brunch buffet – it was time for us to play! Some of the folks spent a day at the magical theme park, while the rest went to visit the strawberry farm near the lower skyway. 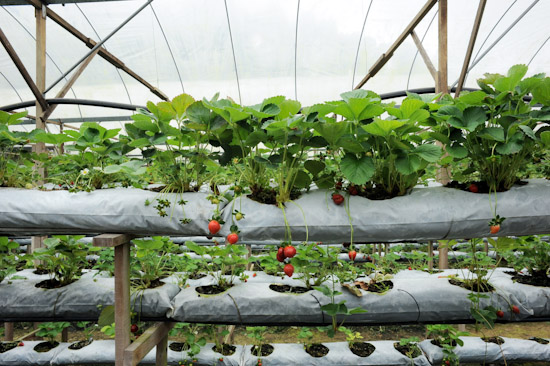 I am sure many of you are familiar with the strawberry farm since I have blogged about it during my previous visit. 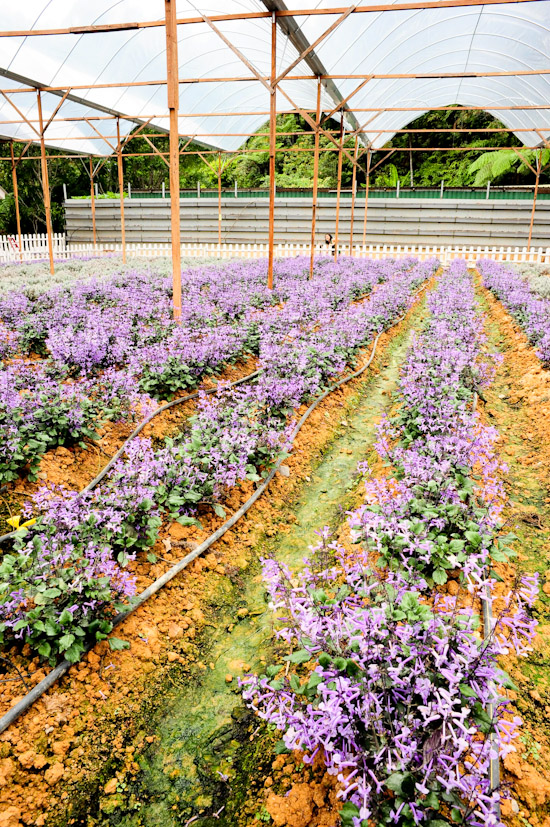 But do you know that they have recently opened a new lavender garden just beside the strawberry farm? 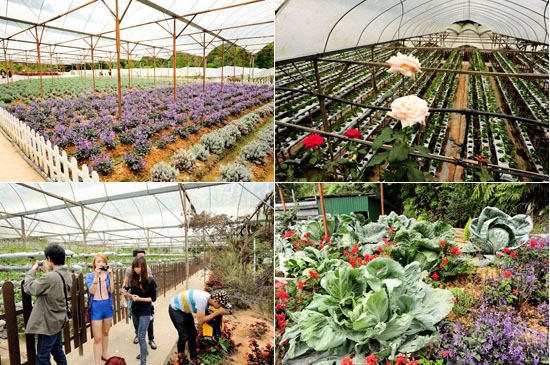 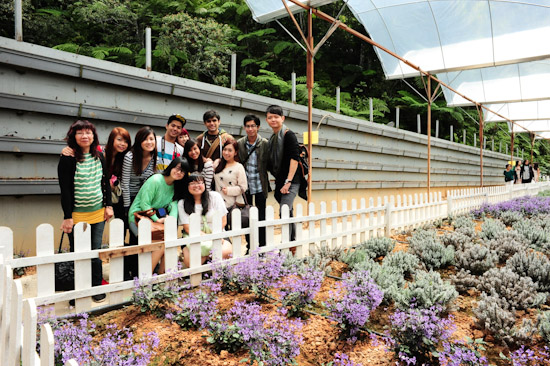 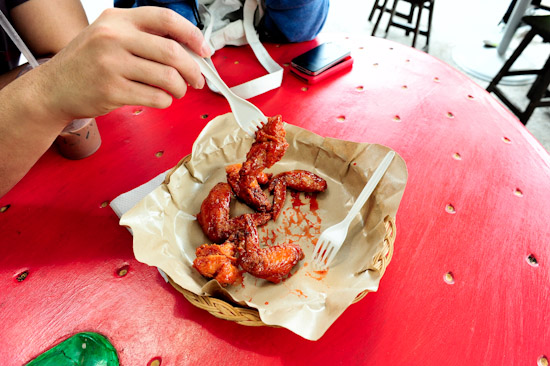 To be surrounded by lush greenery, the accessibility of fresh berries and the scent of aromatic lavender lingering in the air is enough reason for you to make a day trip down to this beautiful garden. Everyone had so much fun taking photos, and of course, you must try the chicken wings coated in strawberry sauce when you are there. 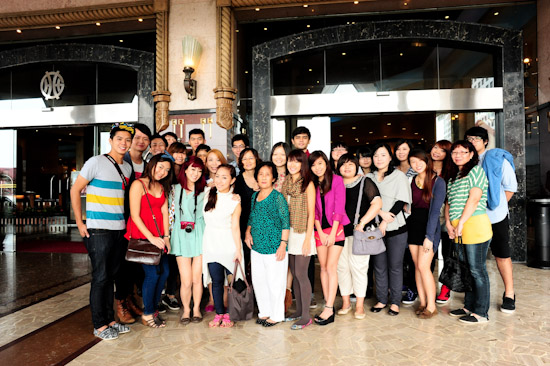 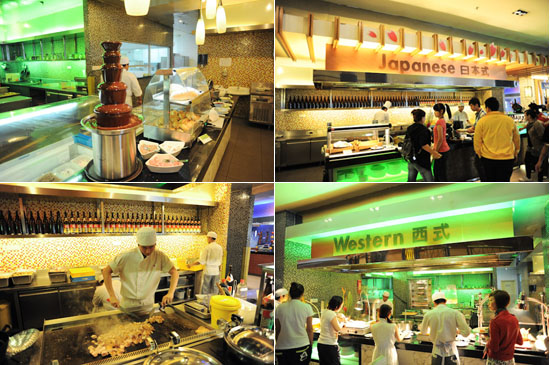 After an adventurous day, we had international buffet dinner at Coffee Terrace (Lobby Flour Maxims Genting Tel: +603 6101 1118 Ext. 58267). During the previous trip, we were there for breakfast, so I was looking forward to sampling the sumptuous spread for dinner.

Coffee Terrace is one of my favourite to-go places whenever I am in Genting. Be it breakfast, lunch, or dinner, they have a huge variety of food. Trust me, you would be spoilt for choices – char kway teow, dim sum, roasted meat, sushi, sashimi, and desserts. YUM! 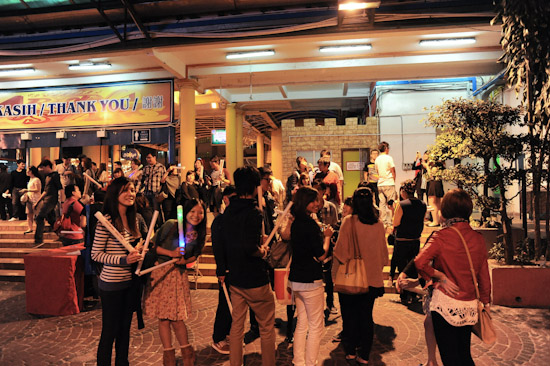 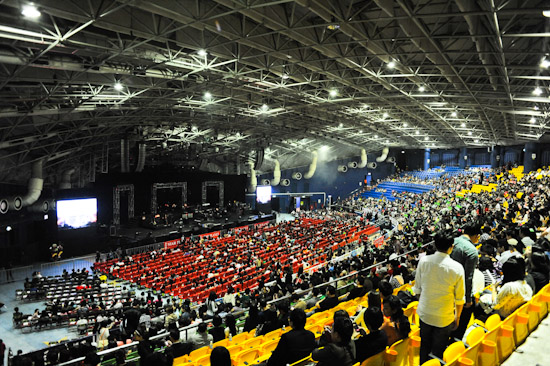 Catching Fang Da Tong’s concert was another highlight of our trip. Everyone was really excited to head to the Arena of Stars to listen to Khalil Fong.

This was my first time to the Arena of Stars and I am really impressed; it is an amazing venue for world-class concerts. Before this, I’ve always wondered how it looked like inside, and when I stepped into the arena, I was blown away by the atmosphere.

Besides Khalil Fong, big names like Fish Leong and The Twins also held their concerts here earlier in the year. And if you are a fan of Jam Hsiao, you must catch his ‘World Tour 2012 Live Concert’ at Arena of Stars on 1st Sep 2012. I heard that the tickets are selling fast, so make sure you apply for leave and spend a weekend with Jam Hsiao. 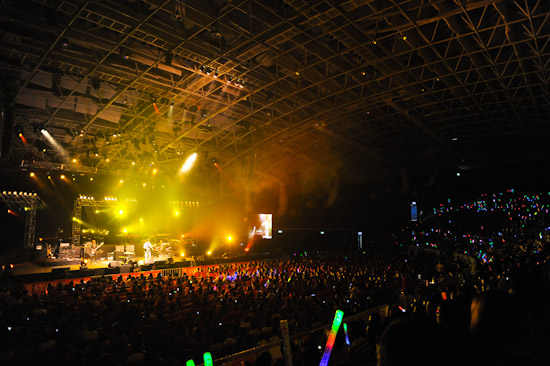 Throughout the three hours concert, Khalil belted out many popular songs. And that’s not all. The kind folks at Genting even arranged for us to meet up with him backstage after the concert! 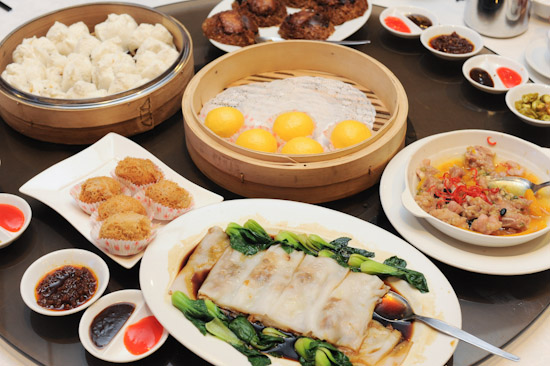 For our last meal, we went back to my favourite Genting Palace to sample their dim sum offerings. 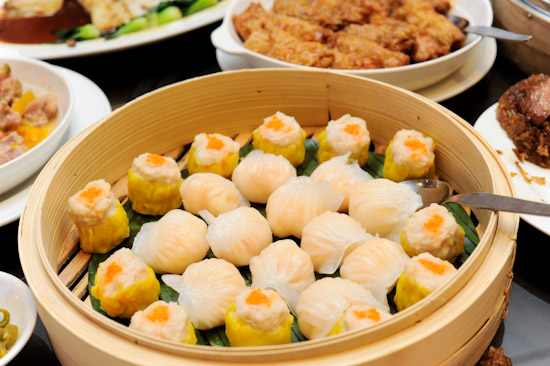 Genting Palace serves dim sum during lunch from Monday to Saturday. And on Sunday, they start dim sum service during breakfast. 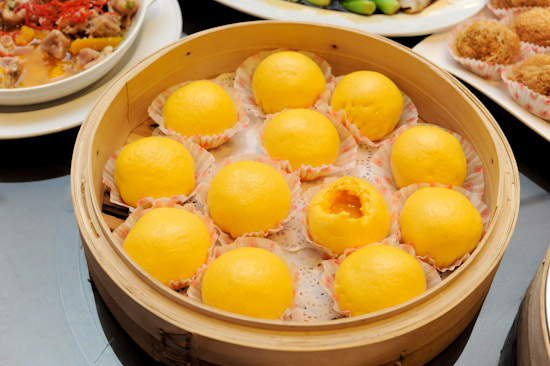 Their custard buns here are to-die-for, you must try it when you are there for dim sum. 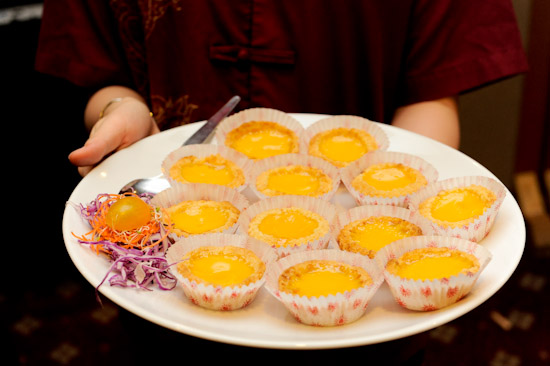 The chef’s signature baked mini egg tarts are also excellent. Even though I was full, I still managed to eat a few of them. 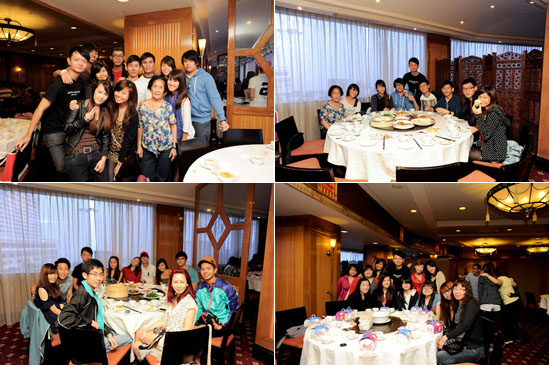 The 3D2N Genting food tour went really well, and I hope that everyone had a good time. Other than theme park and casino, Genting has a lot more to offer; I definitely recommend it if you are planning for a weekend getaway. If you have never been there before, you must make a trip soon.

Do visit Resorts World Genting’s website for more information, and feel free to leave a comment if you have any questions. See you in Genting!

Hi Brad! I’m interested in joining you for the Genting food tour in Sept!

Hi Brad!!! I would love to join you for the next renting food tour!!!

Hi! Please keep me posted on the next Resorts World Genting food tour. Thanks!

Hi Brad…hope i have the chance to join for the next tour. I didn’t managed to be shortlisted for the recent one

Oh wow look at those mouth watering photos! Glad you had fun!

Hey brad, I am interested in the food tour, life is all about eating and travelling yeap, hear from you soon.

Hi Brad! I’m interested in the food tour in Sept!

Let me know the details if any. Hope it’s the last week of sept so i can make it!

great trip to genting ! I am interested too in September !

Dear Brad
Love your blog. Not too sure abt Genting but it would be good if you can arrange for KL/Malacca!
Cheers

definitely keen to join your trip in Sept, hopefully to Penang/KL or Malacca, but not Genting as the food there is not so appealing.

hi Brad, been to Genting very many times – you are fortunate as previously in Genting Palace, pork was not allowed! Imagine chicken siew mai!
The fish soup (1 size large bowl)and stir fried radish cake (dimsum) counts as one of my all time favourites!
On another note, it would be good if you can conduct an unlicensed food tour to the mushroom farm (5 mins drive fr genting, the eating place provides transport to/fro their place to any of the genting hotels)for your own benefit of course.

Been reading your food reviews a lot. This sounds like a hell lot of fun and I sure would like to join in!

Am keen on joining your next food outing.

Have been reading your blog everytime I am on a search for good food. And it has never disappointed me.

Hope to join in the fun in Genting if there’s a chance.

I want to join too!

Hi Brad, I am interested in joining the food tour. Looking forward to a favourable reply

Count me in! Kids (not very young, but definitely food lover) allowed?

Have signed up for 5-Stars Genting/Malacca 4D3N Mid Autumn festival. Likely the trip will not move because lack of min group size. Wonder whether there is still room for 4pax over at your side to join the mid autumn festival? Pls let me know asap. Thanks.