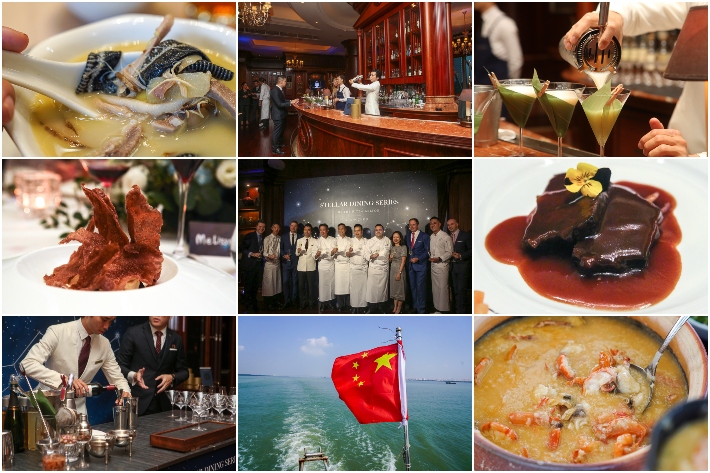 Most people define a city’s rich culture and heritage by its history, architecture and language. However, to us, the true way of getting to know a place is through food. As the saying goes, food is the way to the heart, and there is no better way to fall in love with a city than by indulging in their rich culinary scene.

We had the opportunity to attend the Stellar Dining Series by The Ritz Carlton 2019 in Guangzhou, the final pitstop of the entire event. This is its second year running and the whole series spanned across 2 months and 3 countries — Tokyo, Kyoto & Guangzhou — three of Asia-Pacific’s most renowned gourmet destinations.

This multi-sensory adventure saw exciting collaborations between Michelin star chefs, star mixologists, sommeliers and pâtissiers from 7 Ritz Carlton hotels in Europe and Asia from places such as Tokyo, Hong Kong, Macau and Guangzhou. Together, while holding nine Michelin Stars between them, they whipped up a series of lavish, gastronomic feasts that left us gobsmacked and hankering for more.

Aside from the luxurious spread, we also got a chance to learn more about gorgeous Guangzhou through its cuisine. Despite the trip only being 3 days long, we managed to get a substantial taste of the history of this beautiful province by tryng their unique local dishes.

Our home for 3 days was, of course, the palatial The Ritz Carlton, Guangzhou. Exuding elegance and opulence, the hotel is a harmonious combination of Eastern and Western traditions. No detail was left out in its lux appearance, which was complemented by a lineup of impeccable staff who greet their guests with a homely sincerity. 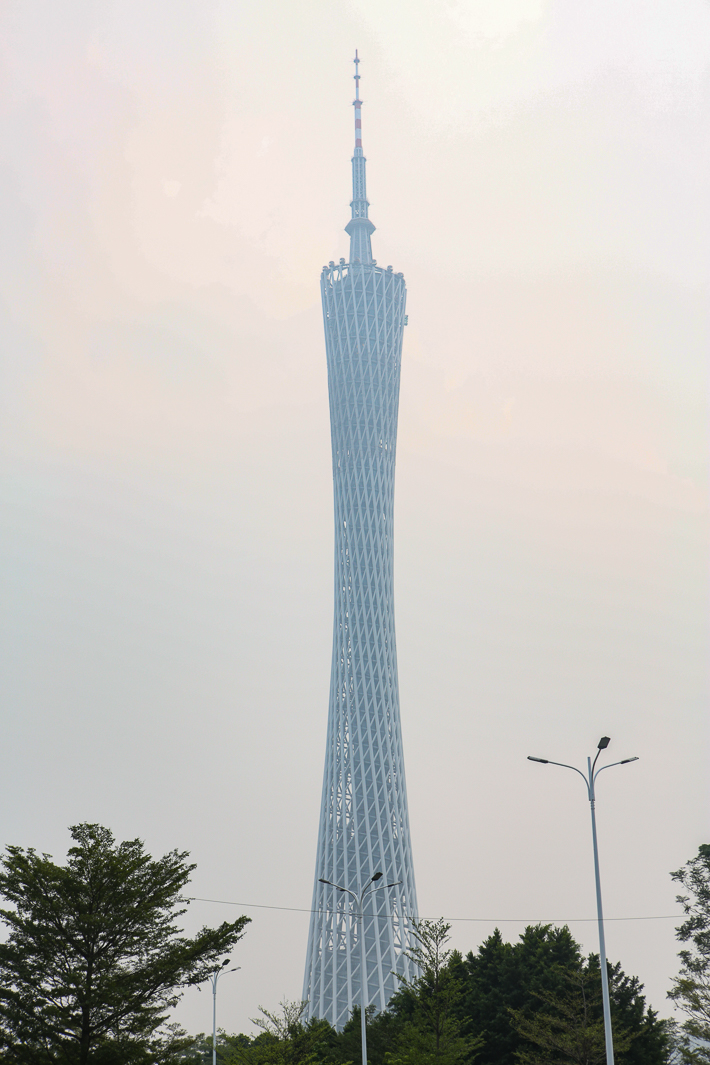 The higher levels of the hotel provide guests with a breathtaking view of the city, including iconic landmarks like the Pearl River and the famous Canton Tower. The convenient location in the bustling city centre also makes it easy to check out attractions such as the Tianhe District, Guangzhou Opera House, Guangzhou Museum and Guangzhou Library. 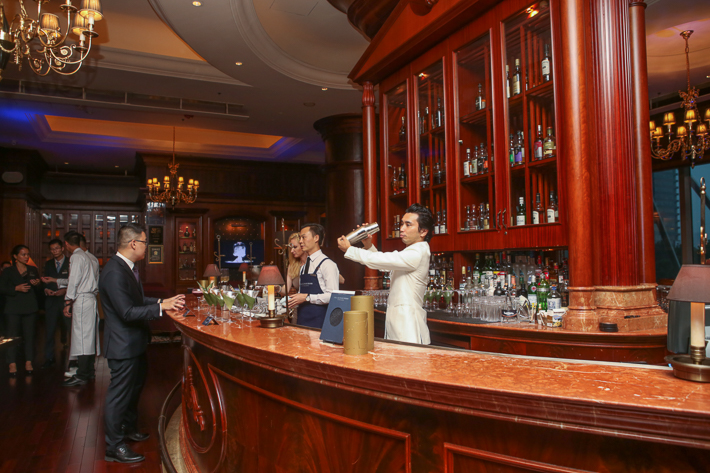 THE CHURCHILL BAR
Decked in wood-panelled walls and fixings, plush leather seats and an impressive selection of drinks on display, this stately bar ups your drinking experience by tenfold. Home to the largest collection of single malt whiskeys in Guangzhou as well as wines, premium beers and fine cognacs, this is an alcohol aficionado’s idea of paradise. 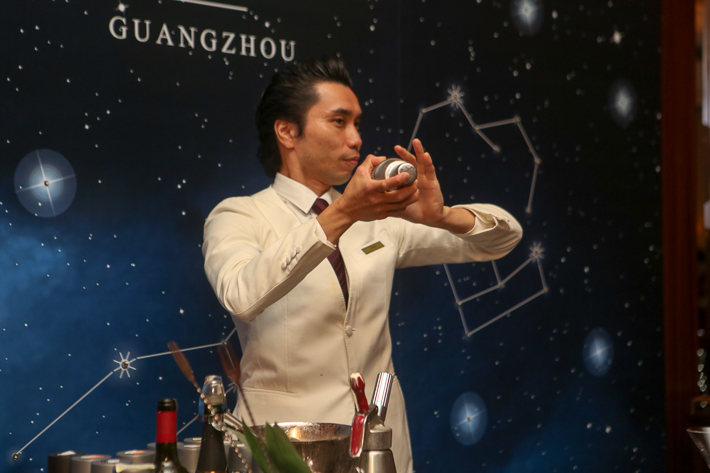 This was also where we got to take part in the Handcrafted Japanese-style Cocktail Masterclass by the bubbly Kentaro Wada, Chief Mixologist of The Ritz Carlton, Tokyo and the 2018 Japan Chivas Masters Global Champion. 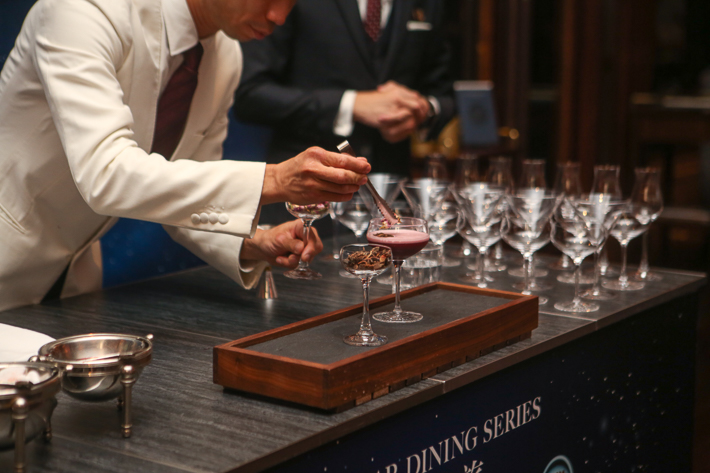 We got the chance to watch him work his magic up close as he presented to us his signature Japanese-style cocktails. He also patiently guided us in making our own cocktails while providing us with little tidbits of tricks to help us make a cocktail like a pro. 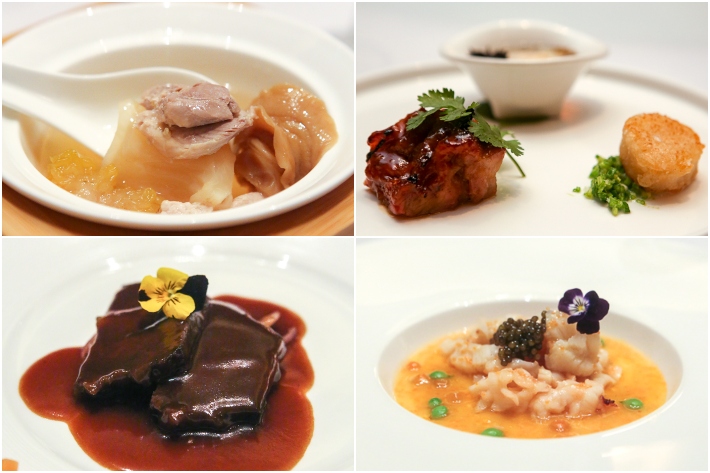 For our first dinner at The Ritz Carlton, Guangzhou, we were honoured to enjoy a six-course dinner prepared by 3 Michelin-starred chefs from 3 different parts of the world— Chef Paul Lau from Hong Kong, Chef Jackie Ho from Macau and Chef Gordon Guo from Guangzhou. This was the first time that these 3 legends were cooking in the very same kitchen and they whipped up an ambrosial, unforgettable Cantonese-style feast. 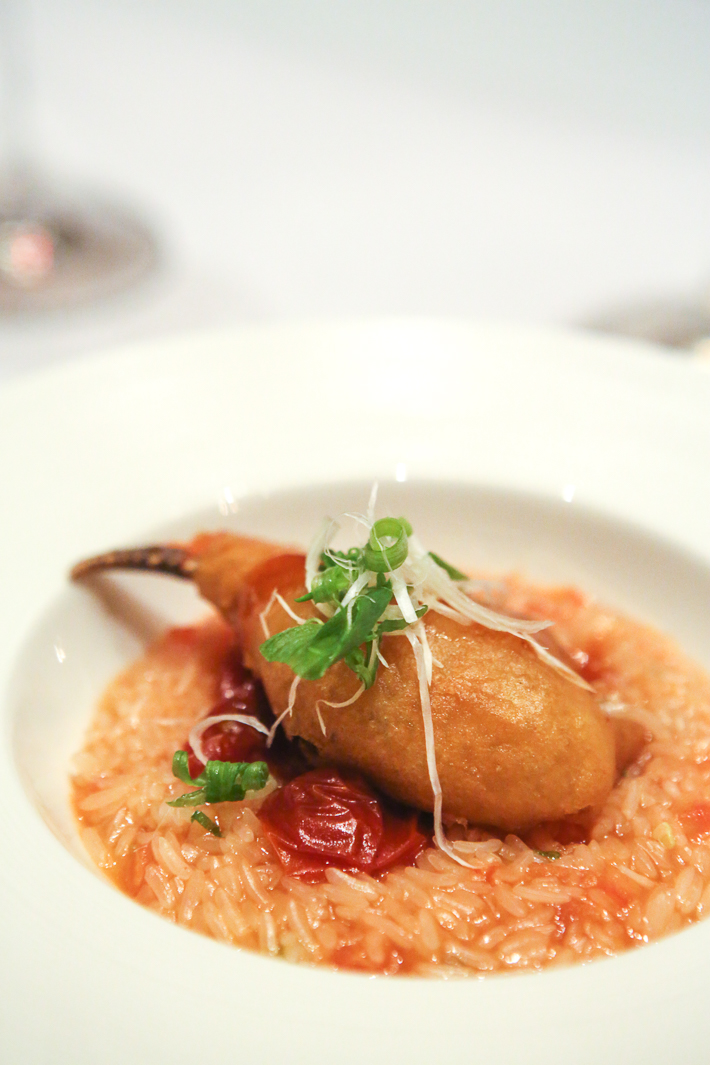 While it is hard to choose a favourite, the dish that left a lasting impression on all the guests was the Glutinous Rice, Crab Tempura and Tomato, prepared by Chef Paul Lau. Paired with a glass of 2011 Kuai Ji Shan, this Chinese-style risotto featured sticky glutinous rice cooked to perfection in a tangy tomato concoction that was topped with an outrageously crispy crab tempura. We ended the gastronomical meal on a sweet note with a masterpiece of a dessert by Chef Gordon Guo. Here, a wolfberry infused guava pudding was paired with cheese sauce and a glass of Cháteau Rieussec. A simple yet ingenious combination that pulled all the varying components of the meal together in a harmonious ending. 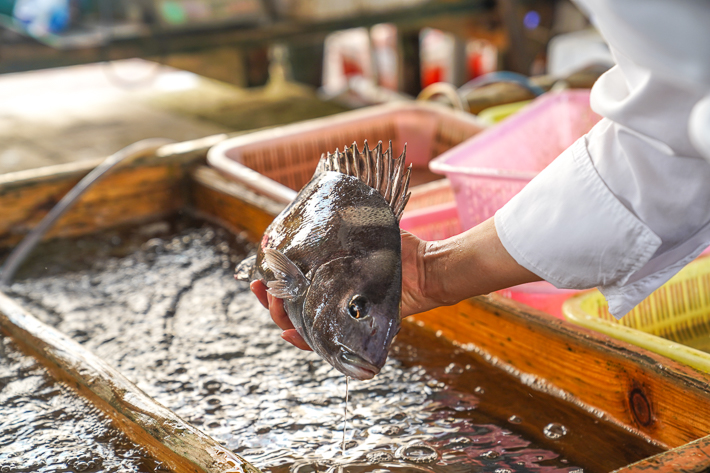 On our second day, we went on a little excursion to the Lingan area accompanied by well-known local gastronome, Mr Philip Ho as well as Chef Gordon Guo. 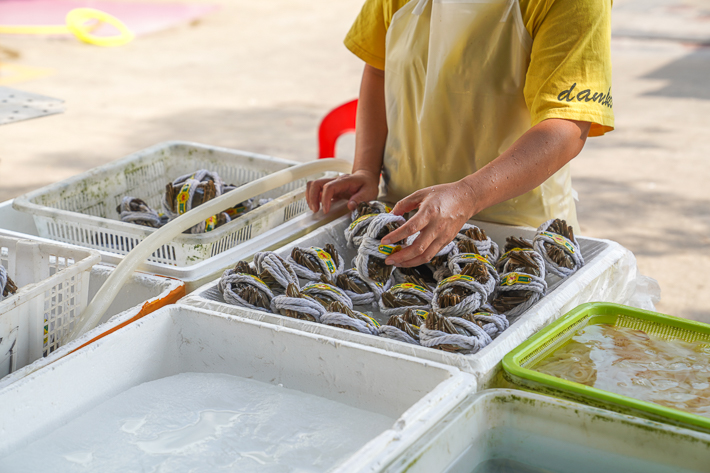 Here, we got to visit Nansha Island Fish Market, a local seafood market at Nansha Shijiuchong in the southern tip of Guangzhou. 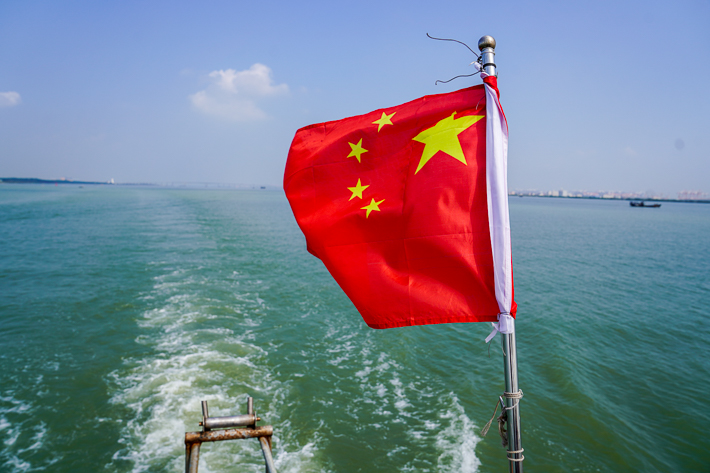 We also got the opportunity to take a boat out to sea to explore the Pearl River estuary as well as try our hand at catching some fish. To end off the refreshing experience, Chef Guo and Mr Phillip Ho used the fresh seafood that we had bought at Nansha Island Fish Market to cook us a gargantuan, steaming pot of traditional Cantonese seafood congee. 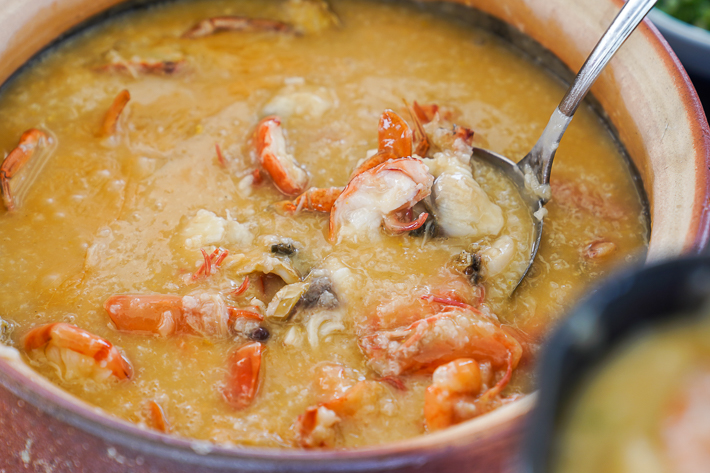 This wholesome, soothing dish had a creamy texture that was further enhanced by an unconventional ingredient — peanut butter. This paired surprisingly well with the sweetness of the various seafood in the mix such as prawns, crab and fish. If we could have this dish for breakfast every day, we undoubtedly would. 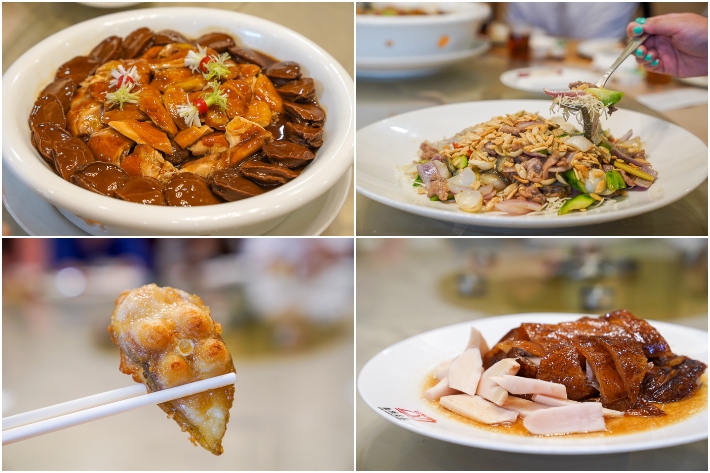 For lunch, we dined at the renowned ShunDe, a restaurant that specialises in Cantonese-style food that may come off as slightly bizarre to a foreigner. Here, we sampled interesting, unconventional dishes such as Snake Soup, Stir-fried Soft Shell Turtle and Fried Catfish. 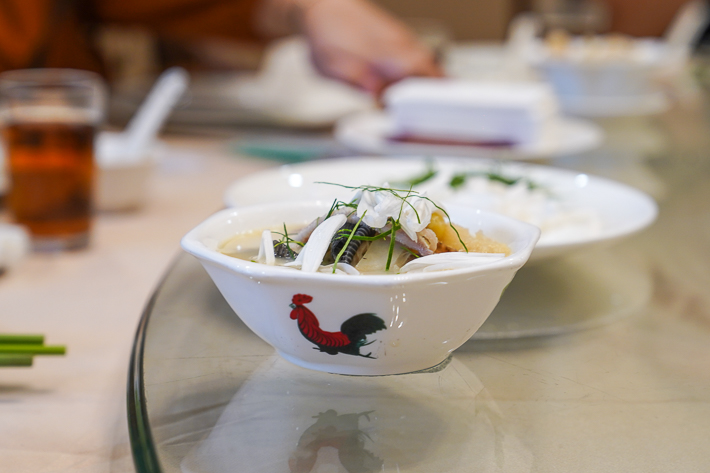 Despite initially being rather intimidating, the Snake Soup, ShunDe’s star dish, was surprisingly palatable. Sweet, fragrant and milky, the soup tasted a little like chicken soup and had a lovely, refreshing finish. 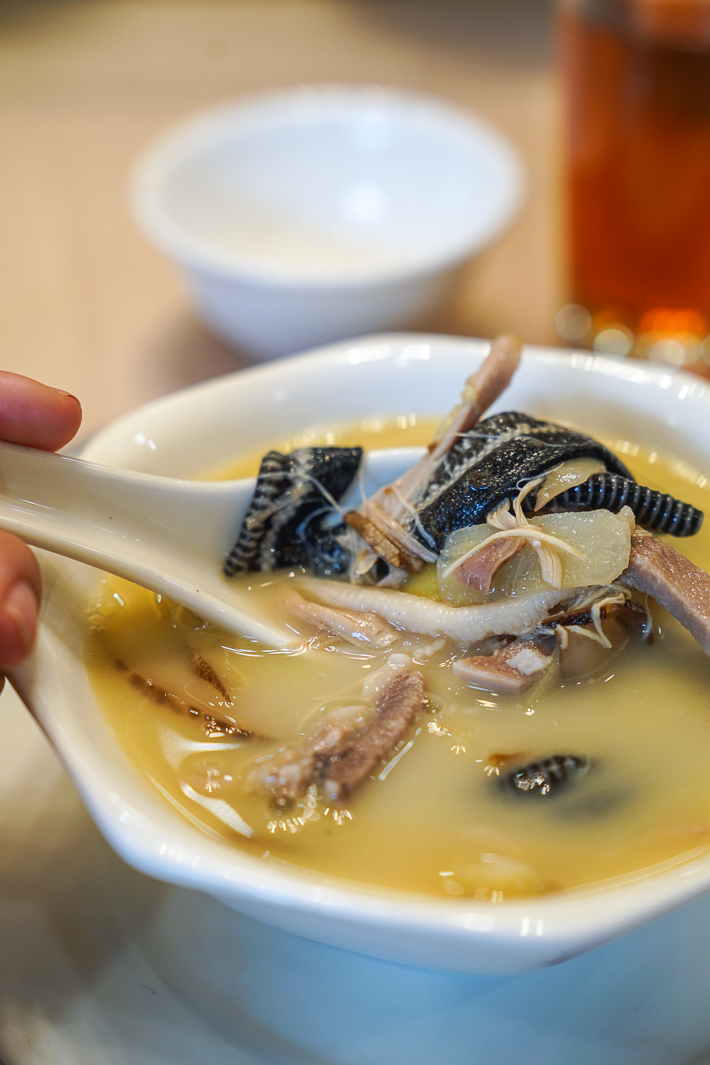 The inclusion of snakeskin and meat in the soup may come off as slightly unnerving for some people but after getting past the chewy texture, we feel that it definitely added a nice touch to the dish. 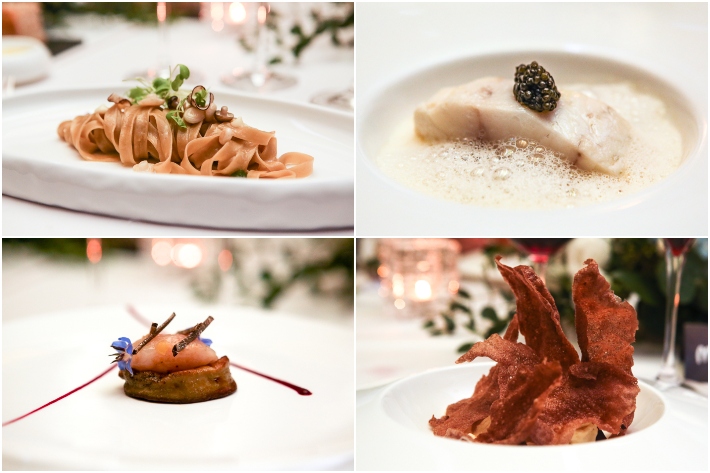 To end off the trip on a high, we had our final meal at the ritzy Michelin Plate Restaurant, LIMONI, which name translates from Italian to lemons in English. We were served a stellar six-course dinner that was done up by Executive Sous-Chef Mr Hubert Ly and Italian Chef Davide Allievi. If we had to pick a favourite, it would be the Sous-Vide Pigeon Breast, Leg Confit, Celeriac, which paired beautifully with a glass of Vintage 2016 Ruffino Aziano.

Pigeon meat, in general, has an intense, gamey taste that can be quite overwhelming. However, the chefs at LIMONI managed to cook the bird in such a way that the gaminess of the pigeon did not overpower the other components of the dish. 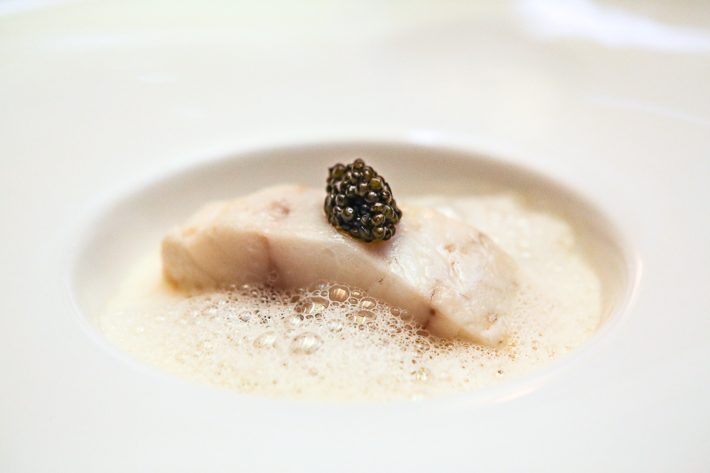 We also thoroughly enjoyed the Line Caught French Sea Bass, Forked Potato, Oscietra Caviar, Prosecco Emulsion. Buttery and light, the French sea bass melts away in your mouth upon the first bite. This is further enhanced by the creamy forked potato and rich caviar. 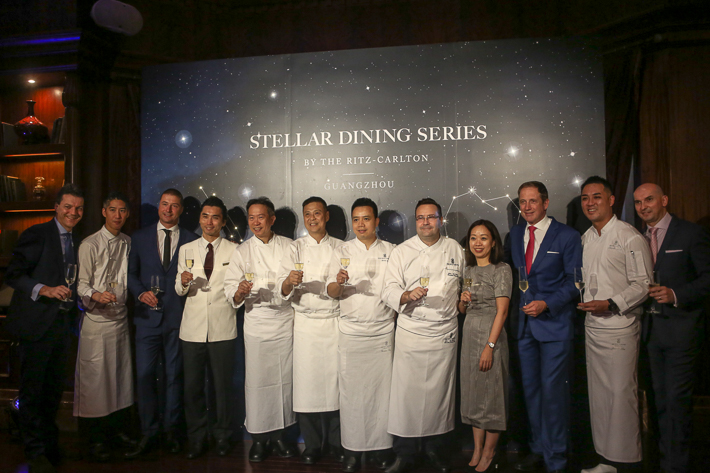 This media trip was made possible by The Ritz-Carlton, Guangzhou.