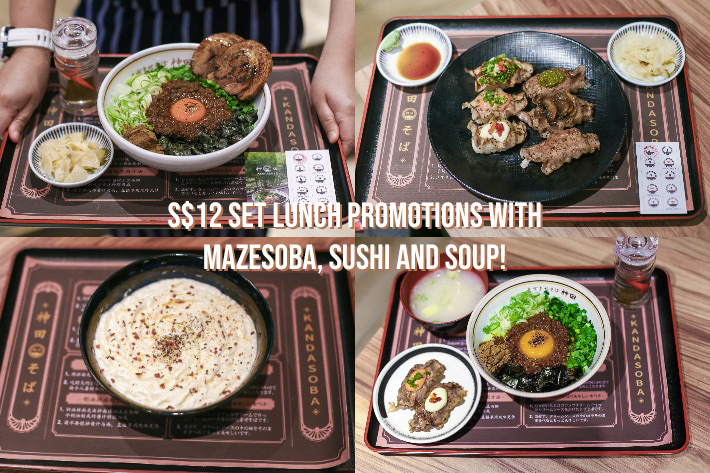 The noodle bar has taken residence in Clarke Quay’s Don Don Donki dine-in food court alongside other Japanese eateries, serving a specialised menu of mazesoba dishes, each created with an array of 62 Korean ingredients. Some of their popular hits include the Original Mazesoba and Cream Mazesoba! 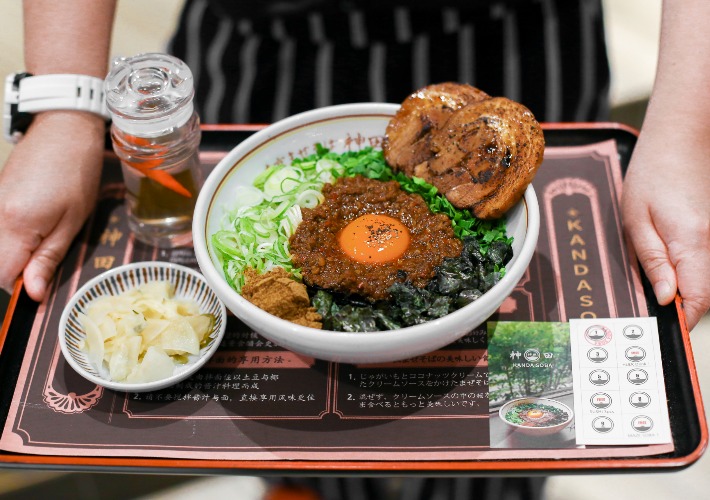 Though it is said to contain 62 ingredients in one bowl, one of the key ingredients in the Original Maze Soba (S$12) is its noodles. Kanda Soba focuses on the chewiness and firm texture of the noodle that they use.

To ensure each bowl comes out perfectly, the noodles are boiled for exactly 8 to 9 minutes before it is mixed around in a strainer to enhance the springiness of each noodle.

A good tip to have when enjoying the maze soba is to first mix the ingredients (spring onions, chives, seaweed, ground pepper, raw egg and meat sauce) in to taste the original maze soba. After, add a little bit of the pickled chili vinegar and mix it again. In this way, you’ll get to not only enjoy one but two different types of flavours in one dish!

We love how Kanda Soba’s mazesoba bowls are customisable, ranging from the meat sauce to toppings and sides. You can be your own chef and opt for the ingredients you prefer! We will recommend going for the Original Beef Sauce, which is a unique combination of both beef and pork. We also added the Chashu, which came in two chunky slices. When we heard that this dish had won over the hearts of many Korean girls, we knew we had to try their Cream Mazesoba. Made from homemade coconut and potato cream, this is one unique mazesoba creation we had never seen before. 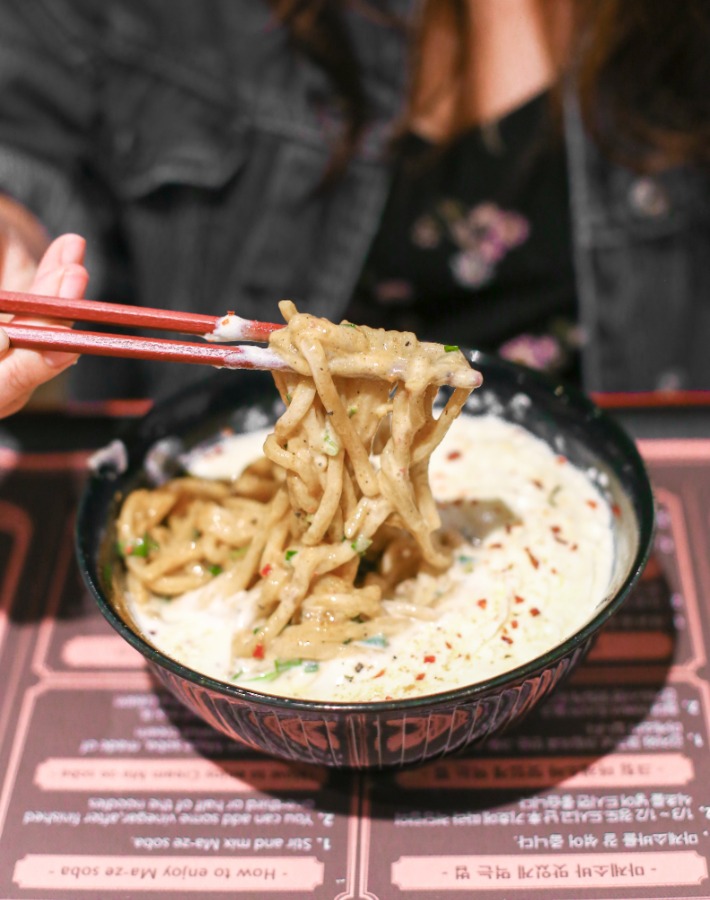 To our surprise, the noodles tasted just like carbonara — except much lighter and airier. It wasn’t heavy on our palates either. The generous topping of cream coated every strand of the noodles, giving it a very fluffy texture. It also had a tangy and slightly peppery aftertaste from the sprinkled spices. 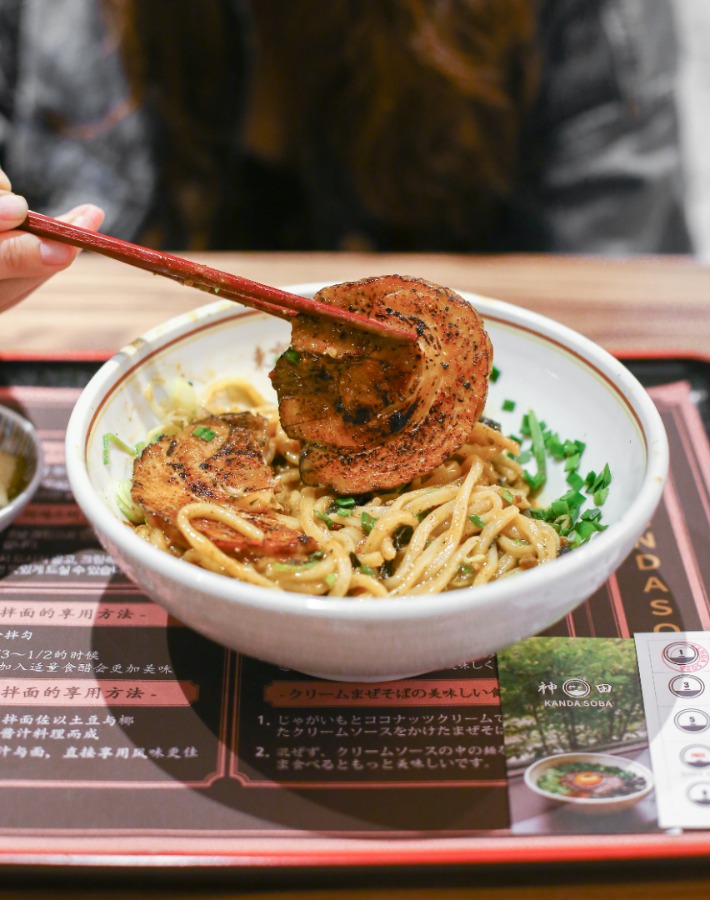 The chashu was fork tender and tore apart easily. It was well-torched, and we could taste the hints of char on it, adding on to its savoury flavour. We also appreciated how the chashu had more meat to fat ratio, as compared to the other overly fatty ones in our local Japanese cuisine-inspired restaurants.

Paired with the noodles, the meat had a solid bite and was a nice contrast to the soft, chewy soba. After all, chashu is a one true pairing with Japanese noodles. Their Spicy Mazesoba is not for the fainthearted. If you’re craving for something that will tingle your tastebuds, this is the dish to try. Just like the Original Mazesoba, it is garnished with a dollop of mixed meats of beef and pork, seaweed, veggies and a raw egg yolk, except with a subtle, unnoticeable twist: a pinch of special chilli sauce.

On the outside, the chilli sauce does not look like much, but mix it together with the noodles and ingredients and you get an everlasting, fiery kick of spice. 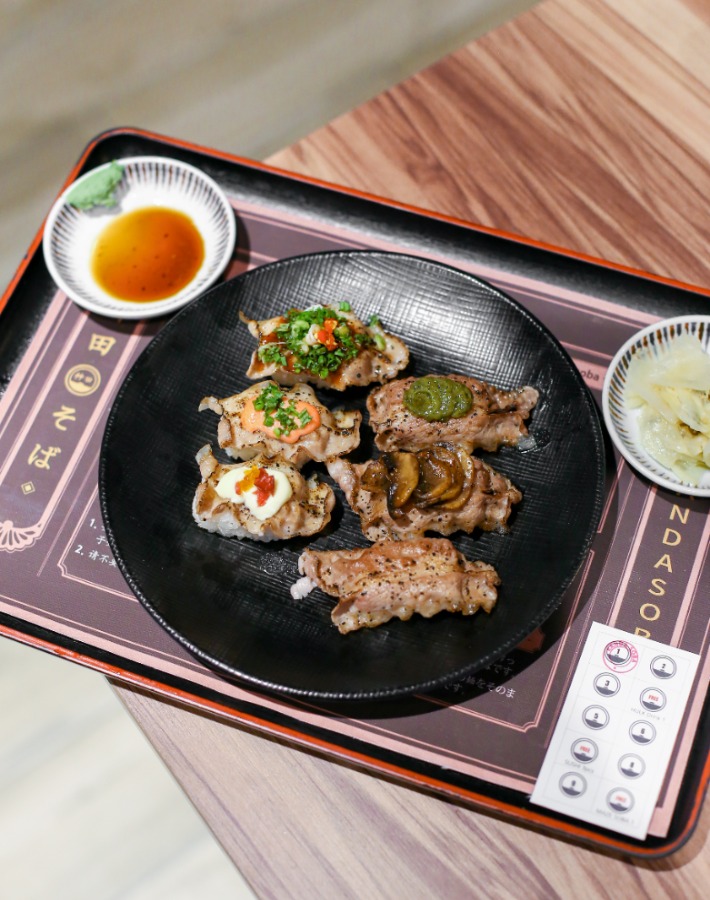 Keeping in line with their Japanese cuisine offerings, Kanda Soba also has six varieties of meat sushi—Basil Pesto, Cream Cheese, Mentaiko, Mushroom, Spicy and Original (Herb Salt)—available for you to order alongside your bowl of noodles. The sushi are freshly made with a choice of beef or pork topping. Each piece of meat is torched until it is perfectly caramelized before it is topped on to the moulded sushi rice with your desired topping. 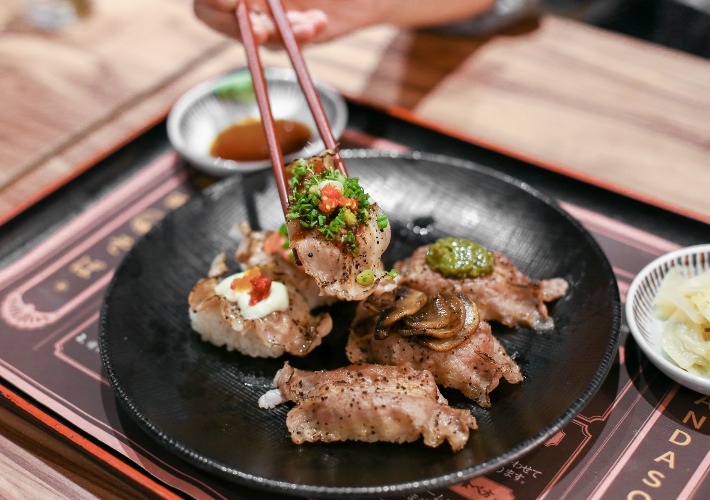 We recommend the Mentaiko with a pork base! The Mentaiko sushi was bursting with sweet and salty notes, while the savoury meat contrasted with the soft, sweet rice. 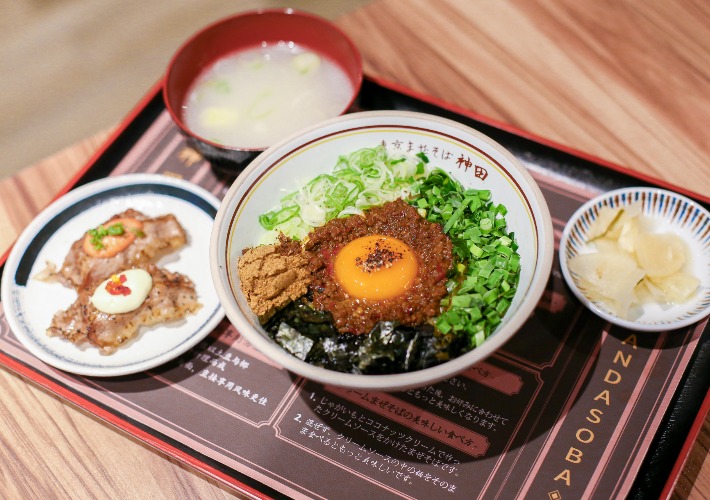 When it comes to lunch time, we are always looking for a meal that is not only tasty, but substantial enough to last us through the day. Introducing the dish that brought Kanda Soba to fame: Original Mazesoba.

We had their set lunch promotion, which runs from 11am to 3pm. It came with two standard pieces of sushi, which was their Cream Cheese Meat Sushi and Mentaiko Sushi. We thought the small side of sushi was a nice touch to a simple meal.

During preparation, the Korea-imported noodles are constantly stirred to ensure its springiness, which results in a soft and Q finish. Though the Original Mazesoba looks unassuming, it is actually chock full of ingredients that are full of piquant flavour. Mix all the ingredients together, and you get a burst of flavours in your mouth. An interesting beverage to try at Kanda Soba is their HULK Power Drink (S$4.50), which is also coincidentally a much-loved drink amongst the chefs who hydrates with this drink whenever they are feeling thirsty in the Korean Summer. This unique thirst-quencher is concocted with the mix of a blue energy drink and a popular Korean Vitamin C drink to give it a bright green colour that’s reminiscent of the well-known Avengers team member, the Hulk.

This post was brought to you by Kanda Soba.