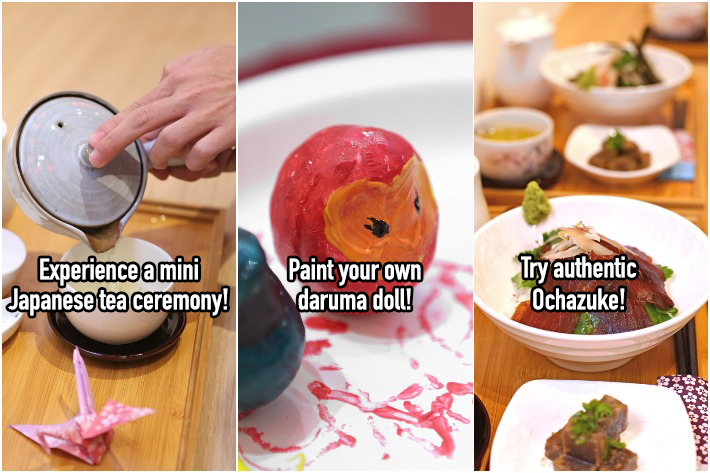 For the first time ever, East Japan Railway Company (JR East), one of Japan’s most notable railway companies, has come to Singapore to present an exhilarating new project in the station retail facilities of SMRT Experience. The result is an interesting multi-sensory platform “Inspiration Store” over at  Orchard Xchange in Orchard MRT.

Be sure to watch out for renowned artists, craftsmen, and chefs from Japan who will make special appearances to share their inspiring insights into the art they create.

Every few weeks, the store will transform itself, showcasing different Japanese crafts and adoring different themes and displays. The event aims to provide an immersive experience and promote sustainability and community. The current theme for the second phase of the installation—that nicely ties in the spirit of Chinese New Year—is “Spring with Daruma”. Daruma dolls are traditional Japanese dolls that symbolise of perseverance and good luck.

If you’re someone who harbours a deep fascination for Japanese culture, this is one pop-up that you really need to check out to get inspired as well as to learn a thing or two about Japan and its rich heritage. From now until 30 April 2019, they will have a special pop-up food store that sells local Japanese snacks, comforting bowls of dashichazuke and soothing cups of freshly brewed Japanese tea. 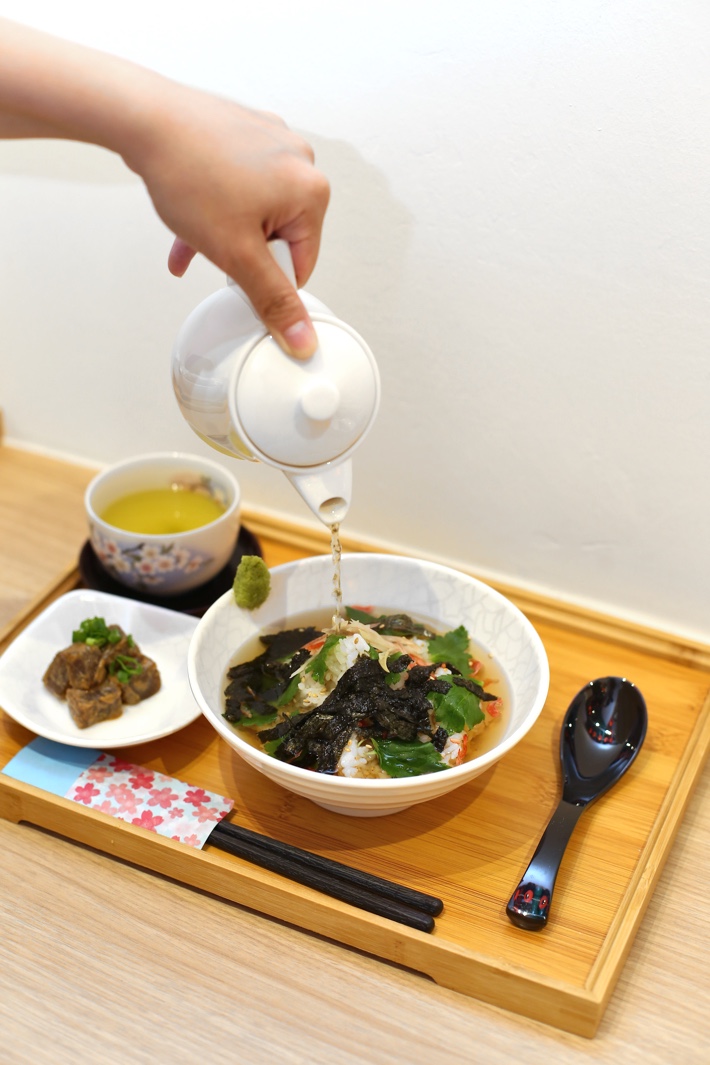 For the unitiated, ochazuke is one of the most basic and traditional Japanese dishes out there and the Japanese consider this rustic dish an essential comfort food that they turn to when they need something light on the palette yet comforting at the same time.

It comprises simply of rice, various toppings such as meat, vegetables and seaweed and freshly brewed tea that is doused over, creating a porridge-like concoction with a pretty thick consistency. However, for the case of Inspiration Store, dashi stock is used instead of tea, resulting in a richer broth packed full of umami, hence the name, dashichazuke. Their Onsen Egg Set (Dine-in S$11, Take away S$9) comprises of a bed of warm rice that is topped with seaweed, sakura shrimp and a plump onsen egg. After pouring in the rich dashi stock, we broke the onsen egg and let all that yolky goodness flow out.

The egg gave the entire dish an interesting thick and creamy texture that helped it glide down our throats with ease. The flavours here were simple yet they managed to hit all the right spots, resulting in a comforting dish that really warmed the heart.

For those of you who love seafood, you can opt to have their Shrimp and Scallop Set (Dine-in S$14, Take away S$12). Here, the rice is topped with juicy chunks of shrimp, succulent scallop bits as well as sakura shrimp and seaweed.

The shrimp and scallop give a nice, chewy bite to it as well as a delicate sweetness that was a nice contrast to the savoury and dashi stock. Though the flavours here were more pronounced than the Onsen Egg Set, the various components of the dish still managed to come together to create a soothing medley of flavours that was simply addictive. 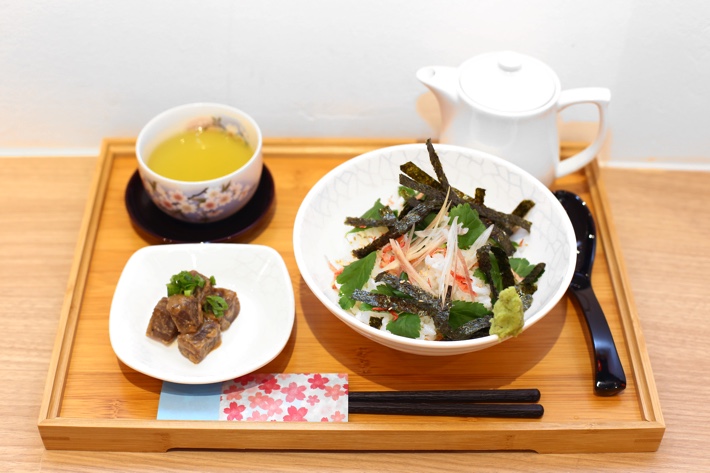 Don’t let their Wasabi Set (Dine-in S$12, Take away S$10) scare you away; fret not as this dish is not one that will leave you in tears. Instead, the wasabi here comes in a small dollop that is placed at the side of the bowl, giving you full control over how much wasabi you’d like to have in your ochazuke.

Aside from wasabi, the dish is topped with a colourful array of vegetables. When mixed together with the dashi stock, everything comes together to create a light-tasting concoction with lots of crunchy components. The wasabi provides a heated punch of flavour and the seaweed gives the overall dish a deep umami flavour. 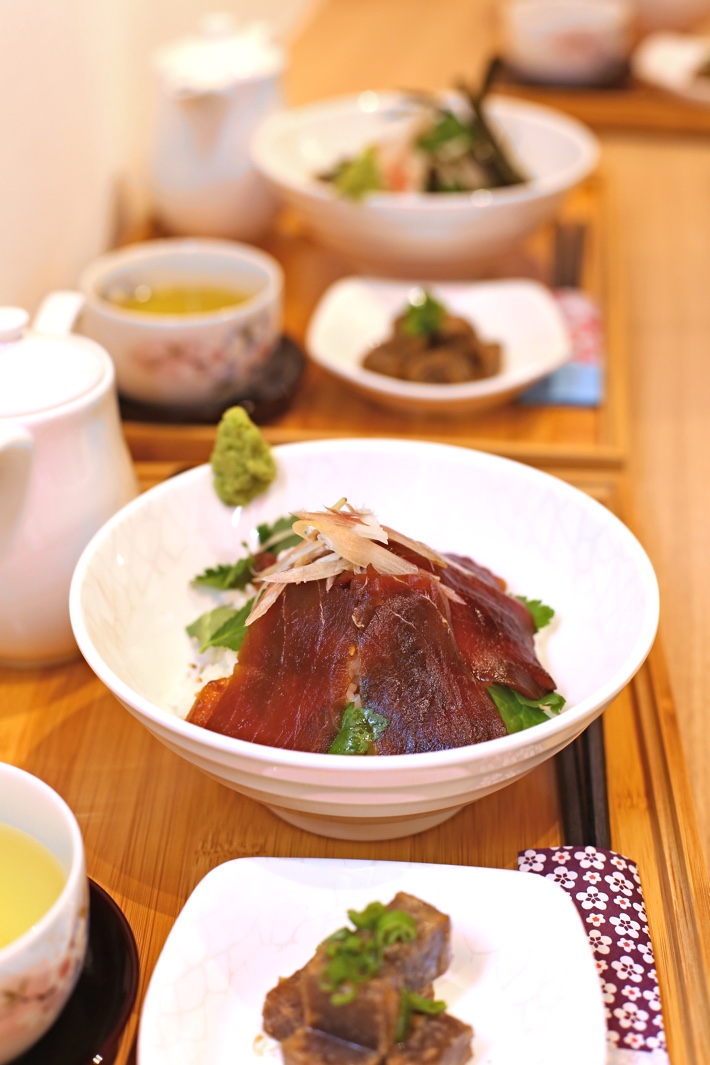 Sashimi aficionados will be thrilled to know that Inspiration Store also has an ochazuke option which features sliced tuna. The  Zuke Maguro Set (Dine-in S$15, Take away S$13) features rice that is draped with generous slices of fresh, tender maguro slices that come pre-marinated in soy sauce.

The maguro slices added a delightfully rich umami flavour to the entire dish and each perfectly sliced piece of tuna was a melt-in-your-mouth treat that definitely elevated the simple flavours of the ochazuke. 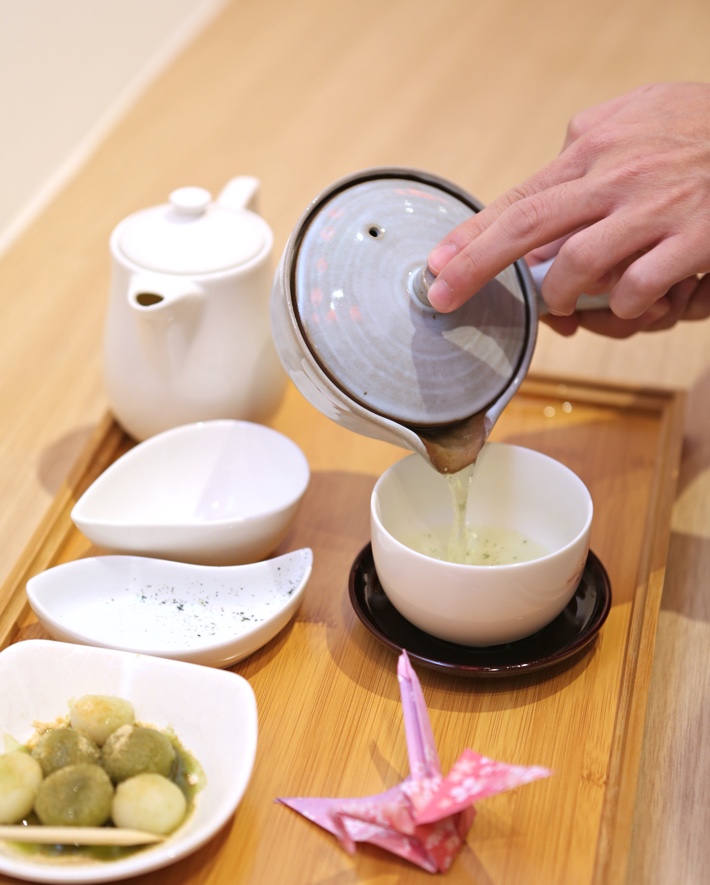 Just for this event, Inspiration Store has flown in a premium type of tea from Shizuoka, Japan called Gyokuro (S$8). This aromatic, high-grade tea is considered one of the most precious and noble types of Japanese teas out there and it has a sweet, soft marine-like flavour.

The optimum temperature of the water to be used in the preparation of the tea is 60 degrees as this brings out the tea’s true essence best. With its rich flavour and soft, delicate finish, the Gyokuro tea goes satisfyingly well with a piping hot bowl of Dashichazuke. 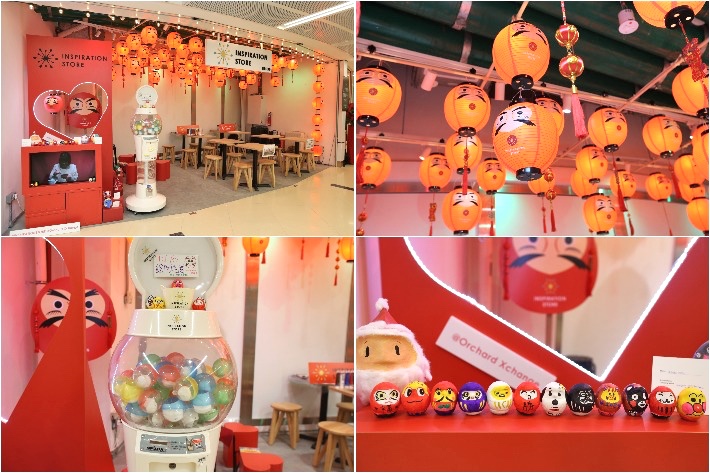 Aside from all that scrumptious food, Inspiration Store has a crafts corner where you can get hands-on and decorate your own adorable daruma figurines. Don’t worry about making a mess because gloves are provided!

For the uninitiated, daruma dolls are traditional Japanese dolls that symbolise perseverance and good luck. To get your daruma figurine, all you have to do is slot one of the provided token coins into a capsule machine that stands at the entrance of the booth, turn the knob and watch your figurine slide out—gashapon style!

The booth also provides a variety of acrylic paint and colourful markers that you can use to decorate your daruma. Once decorated, they’ll pass you a little bag to put it in to bring home. They make great decorations and if you have kids, you definitely should bring them down to let them try their hands out at making their own daruma dolls.

This daruma activity will be available until 18 Feb 2019, after which a new installation will be revealed to take its place.

This post is brought to you by East Japan Railway Company (JR East).