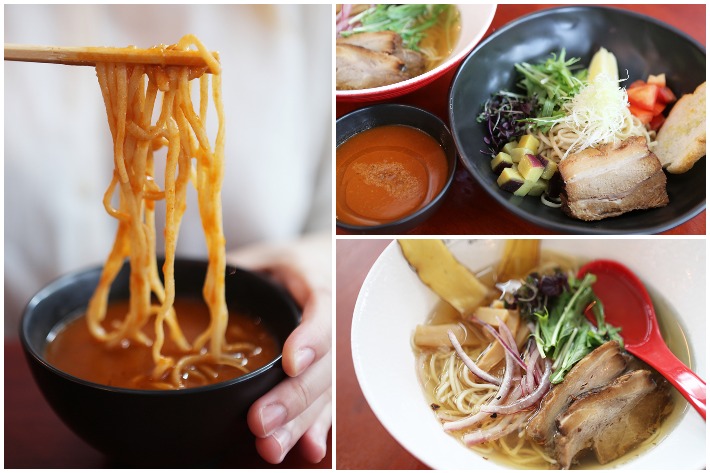 There’s no shortage of Japanese ramen restaurants in Singapore, and joining the lineup over at South Beach Avenue is Ebi-Tori Menzo.

Hailing from Osaka, Ebi-Tori Menzo, as per namesake, specialises in both chicken ramen and shrimp tsukemen. For the uninitiated, tsukemen is a form of dipping noodles, and the sauce it’s served with is a thicker and richer version of the usual ramen soup broths that we are used to.

Their signature ramen offering may not rank as high as compared to many others out there but here’s why you should pay this humble ramen restaurant a visit anyway. We ordered both their signature dishes—their Signature Ebi Tsukemen (S$17.90) and their Shio Chicken Ramen (S$15.90). Their Signature Ebi Tsukemen was served with a mix of fresh salad leaves, tomatoes, sweet potatoes cubes, a slice of baguette and a thick slice of Chashao.

They use over 15 ingredients—all of which are on display on their wall mural—in just their shrimp based dipping sauce and broth alone. The result is reminiscent of both mee rebus and lobster bisque.

To be completely honest, in spite of the hype of the sauce itself being intensely flavoured with shrimp and other seafood items, our taste buds felt differently. Granted that the sauce was rich (as it’s meant to be), the flavours of prawn did not really come through as prominently as we would have liked. 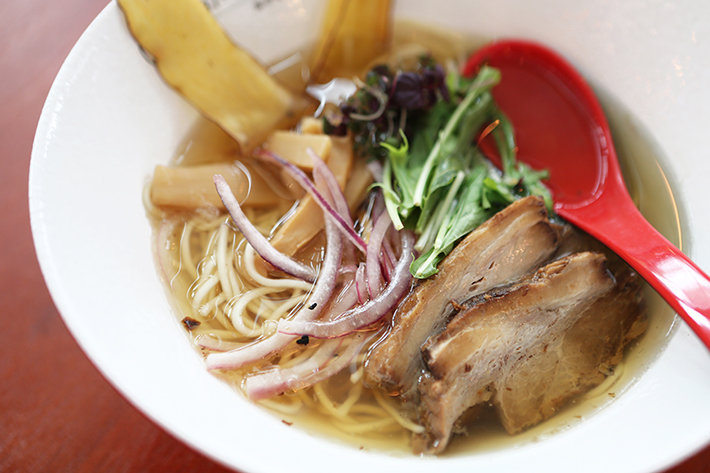 We actually preferred the Shio Chicken Ramen. It was topped with two slices of the same thick-cut Chashao, bamboo shoots and shards of sweet potato crisps.

What caught our attention was not the noodles or broth, but surprisingly, the sweet potato crisps. The flavour of the long crisps melded well with the flavour of the Shio broth, unlikely to be found anywhere else.

Both bowls of noodles were served with Chashao. We found them neither too fatty nor too dry, and it provided an adequate chew before melting away in our mouths. However, for some, it might be considered too salty.