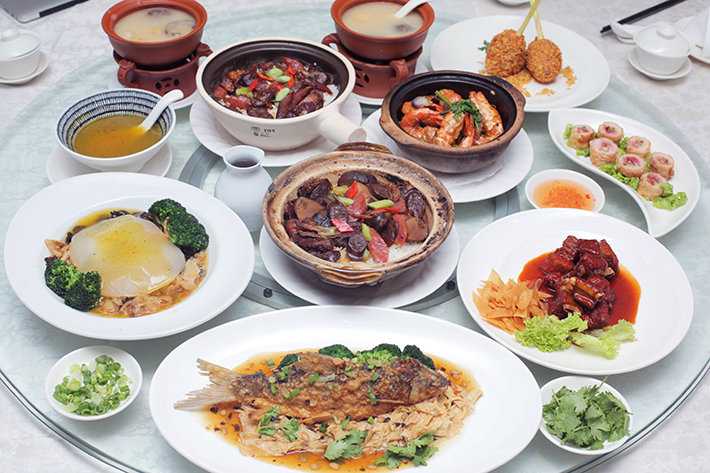 For Sichuan and Cantonese classics executed with finesse, Si Chuan Dou Hua at PARKROYAL on Kitchener Road is one place that warrants a visit. 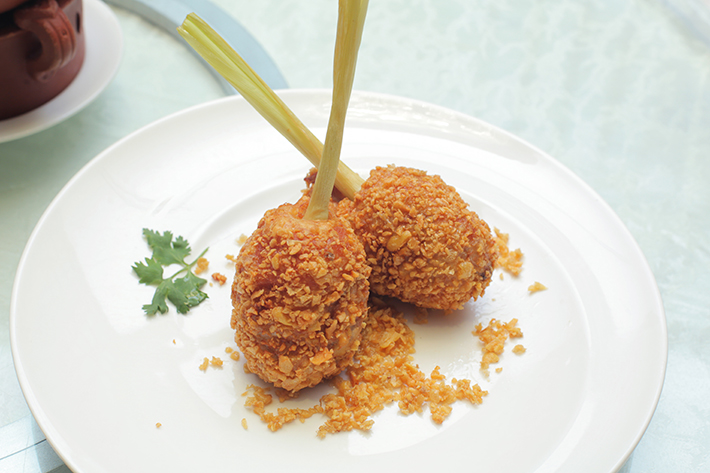 Traditionally made with minced pork and ham, the one here is further enhanced with mushroom and prawn paste. Lemongrass sticks are used in place of regular wooden skewers to provide a secondary burst of refreshing flavour. The drumstick-like meat roll is then deep-fried with a soybean crumb for a satisfying crunch. 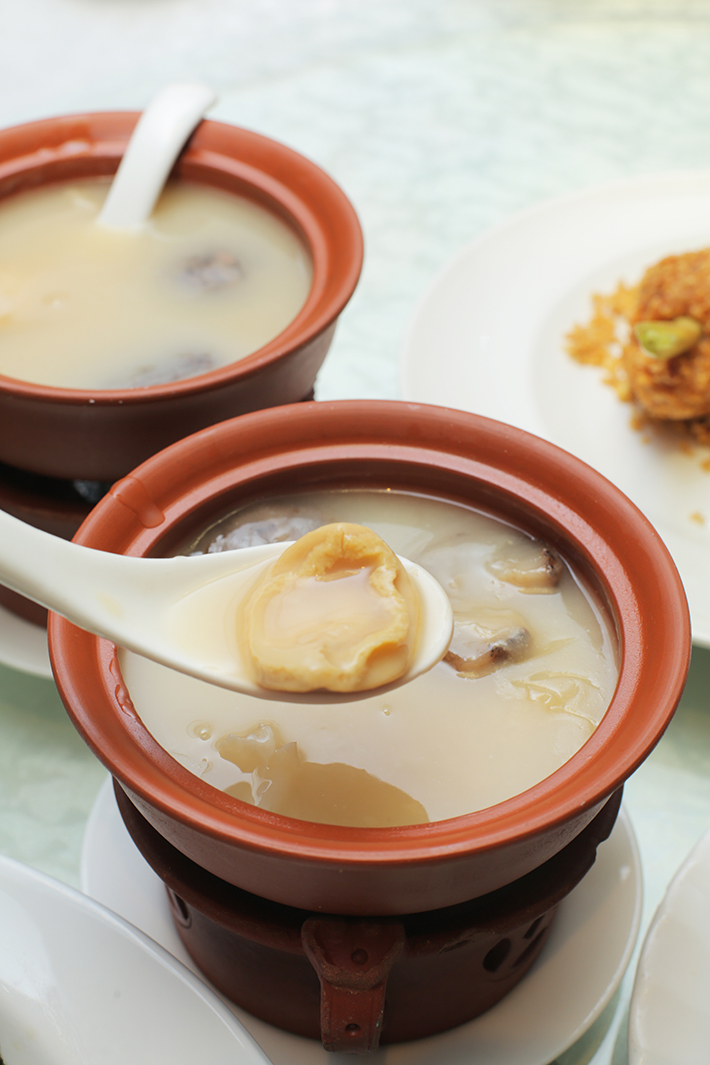 A Cantonese meal is never quite the same without a bowl of comforting double-boiled soup.

Featuring a thick and rich broth that comprises premium ingredients such as pork tendon, dried scallops, abalone, mushrooms and sea cucumber, the Braised Fish Maw, Abalone, Sea Cucumber and Conpoy in Brown Broth is easily one of the best soups we’ve tasted in recent times.

Simmered low and slow, the soup achieves a cloudy hue from all the flavour that the pork imparts and Hua Diao wine is also added to enhance the aroma and overall taste. Thicker than your average Cantonese soup, we must say that this dish in itself is worth returning for. Braised in a claypot with the restaurant’s signature black vinegar, the Pork Ribs with “Zhe Jiang” Vinegar in Zheng Jiang Style is a slightly modern take on the Chinese classic.

We dug in to tender and incredibly flavourful pork ribs. Each bite was a mixture of sweet and sour coupled with a subtle yet satisfying porky taste. 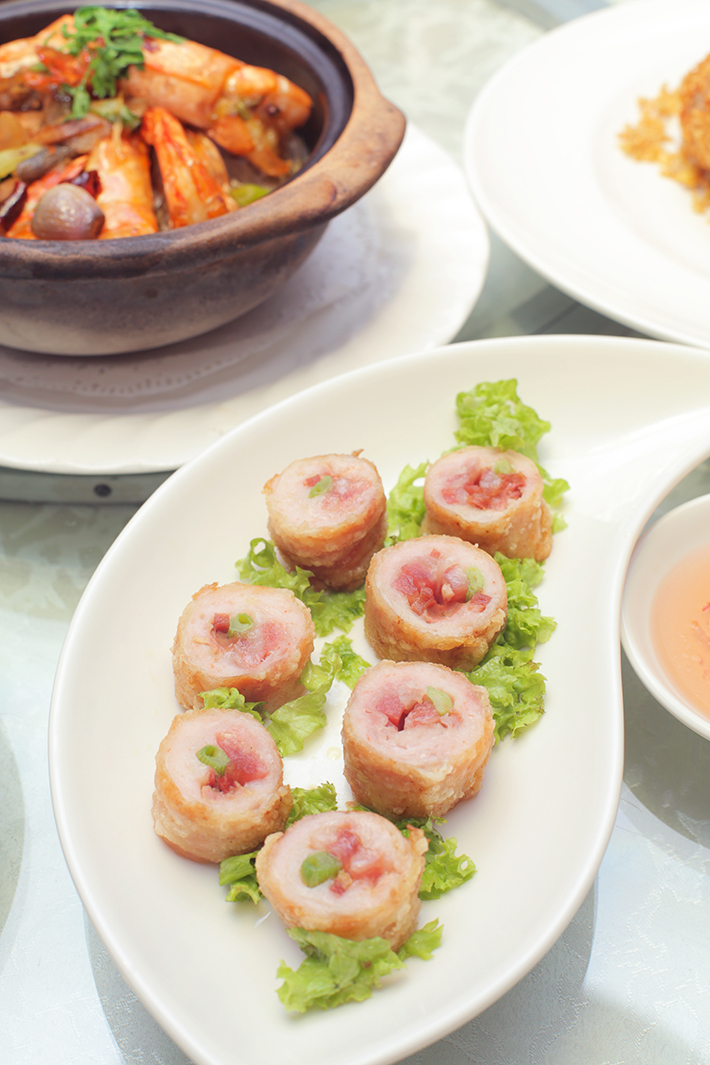 If you are the sort of person who loves fish but dislikes the hassle of picking out the fine bones, then the restaurant’s Fish in “Shun De” Style is perfect for that “laziness”.

The dish features a mud carp that is manually deboned and stuffed with a fish paste that is elevated by the likes of coriander, mushroom, black moss and diced chestnut. A nice crunch coupled with an intense umami flavour and the added bonus of being boneless, we can see why people, especially kids, would love this. 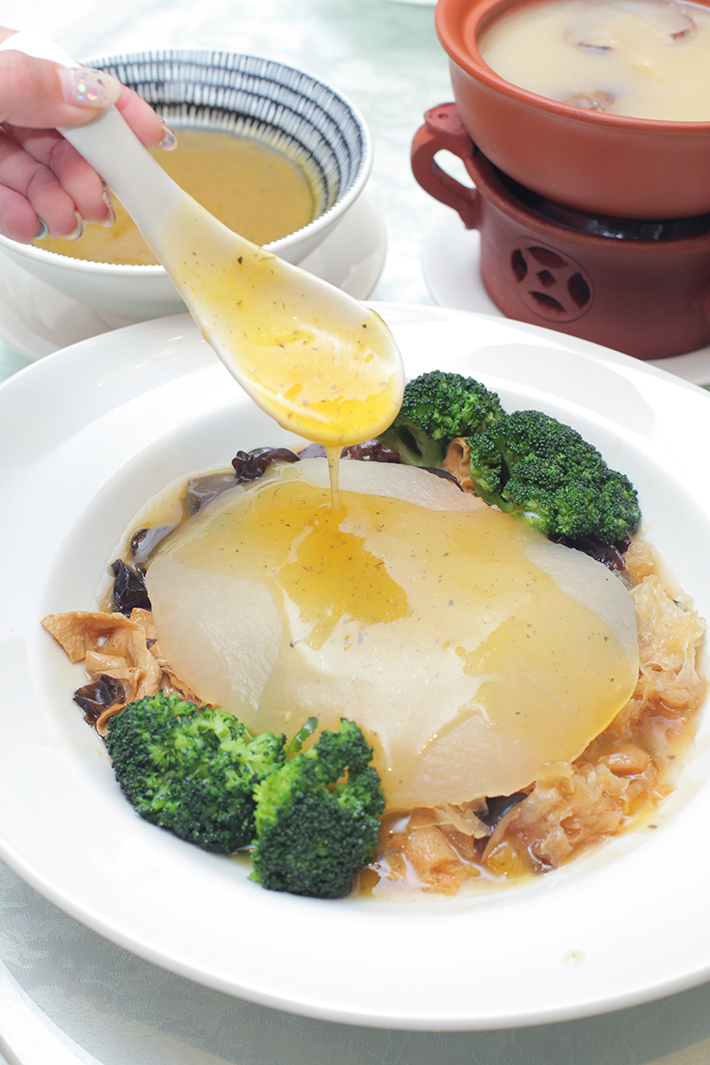 Featuring a medley of stir-fried vegetables and a tender radish that sits neatly on top, the Stir-Fried Garden Vegetables may not seem like a top priority as far as feasting goes.

Yet, we were truly surprised by the complexity of flavours at work here. The sauce that is drizzled over top is accented with truffles, giving it a nuanced umami flavour that takes it one step higher compared to your average vegetable dish. 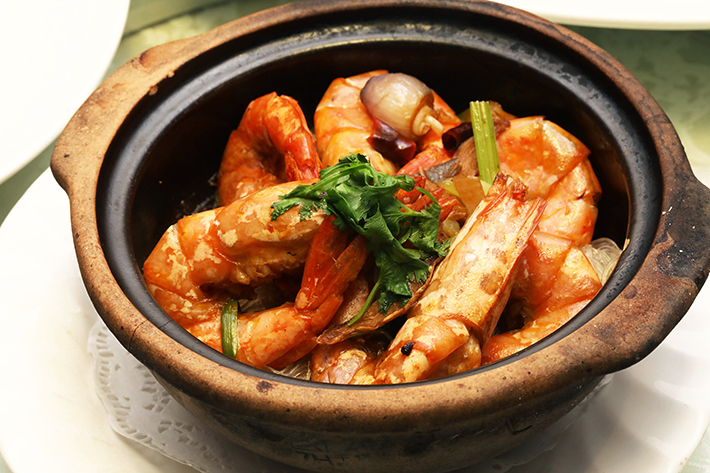 A dish that boasts a delightful wok-hei flavour coupled with a punchy hit of spice is the Braised Prawn with Vermicelli in Spicy Chilli Sauce. Slightly spicy with prominent notes of wok-fried prawn coming through, we were sold the second the dish arrived.

The vermicelli was flavourful without being too dry and everything about this was just delightful—from the smoky, seafood flavours to the lip-smacking spice that kept us reaching in for more. 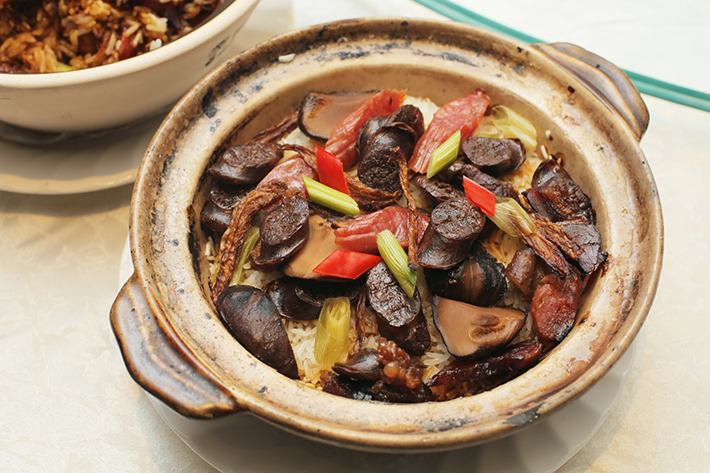 A dish that best demonstrates a chef’s skill is claypot rice. Seemingly simple to whip up given that there are so few ingredients involved, it actually requires a lot more in terms of culinary technique to achieve the best flavour and the perfect texture of rice.

What else can we say? The Claypot Rice with Assorted Waxed Meat here did not disappoint. In fact, we were so utterly blown away by it we almost could not stop ourselves from reaching out for a third helping. Cooked to just the right doneness, the rice was still fluffy without being overly burnt. Chef Leung emphasised that getting the proportion of water to rice is absolutely crucial in this and in order to achieve such a gorgeous aroma, a mixture of waxed meats needs to be used.

We were delighted by the likes of Chinese sausage, Chinese liver sausage as well as waxed duck which all did well to give this dish such a meaty, yet robust appeal. 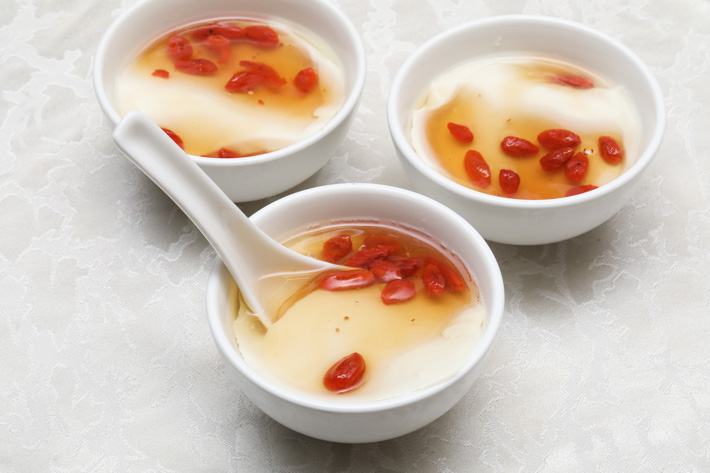 No one—we repeat, no one—leaves Si Chuan Dou Hua without a serving of their signature Homemade Bean Curd with Wolfberry.

Although this dessert is not new to the Chef Leung’s refreshed lineup of dishes, the warm and soothing soft beancurd served with sweet wolfberries is just the perfect finish to a fine culinary experience such as this one.

To refresh your memory, this dinner offer extends from now all the way until 30 June 2018, meaning that all of the 18 new dishes (doesn’t include beancurd) cost just S$18++ per dish and our readers can also quote ‘ladyironchef’ to enjoy an additional 20% off a la carte orders on the Flavours of Jiangnan Menu.

We’re definitely heading back and we shall see you there!