Tucked away in the corner of the 3rd floor of PARKROYAL on Kitchener Road, Si Chuan Dou Hua Restaurant is a family’s favourite and is renown for its outstanding Sichuan and Cantonese dishes.

As part of the celebrations, Executive Cantonese Chef Leung Wing Chung has specially put together a six-course set menu which features many of the restaurant’s classics—from dim sum and Cantonese soups to Sichuan mains and signature beancurd dessert. And it is reasonably priced at S$78++ for 2 persons (regular price S$68++ per person). This promotion is valid daily, with a minimum 4 to dine. 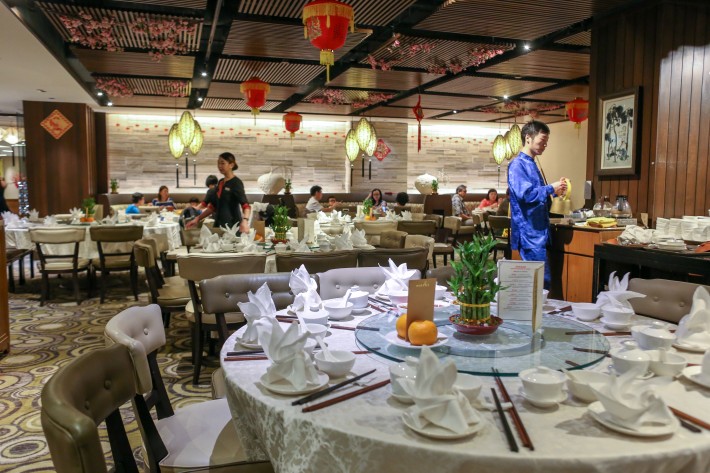 Si Chuan Dou Hua at PARKROYAL on Kitchener Road’s 6th anniversary set menu is available daily for both lunch and dinner from 13 February 2017 to 30 April 2017. 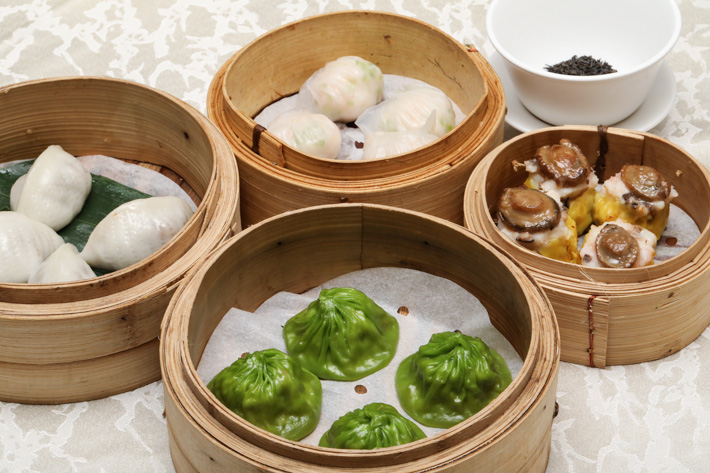 THE ART OF DIM SUM

Featuring a spread of signature dim sum, the ‘Art of Dim Sum’ includes the Chef’s popular items and customers’ favourites. 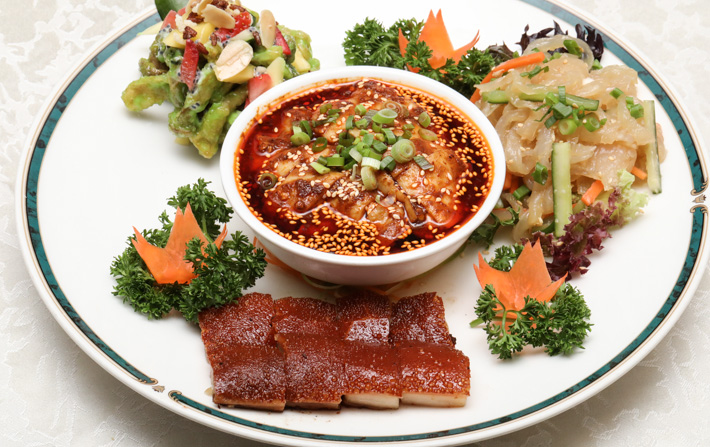 The Sliced Suckling Pig boasts juicy pork enshrouded with crispy skin that had just the right amount of salt.

However, the one that surprised us all was the Wasabi Mushroom, which features shimeji mushrooms tossed in a gentle wasabi sauce. It was surprisingly not overpowering, and in fact extremely addictive with the perfect balance of smokey spiciness from the creamy wasabi and sweetness from the fresh mushrooms. 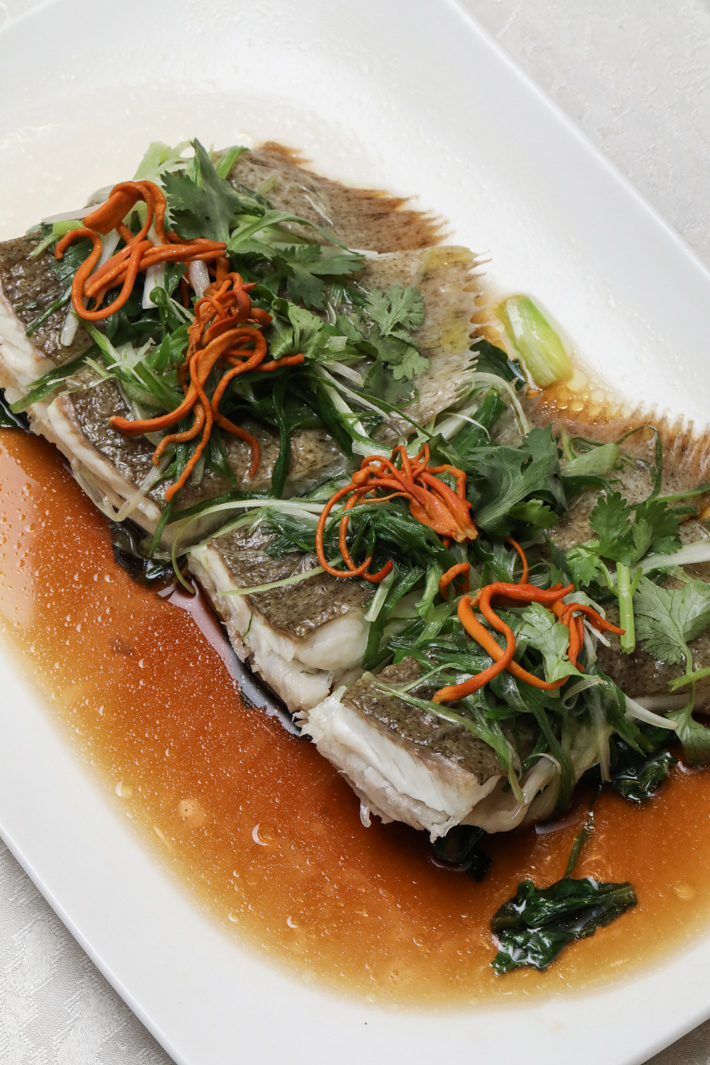 As part of transforming their patrons’ experience at the Si Chuan Dou Hua Restaurant into a luxurious one, Chef Leung has selected the Korean Turbot Fish to be part of the menu.

The Hong Kong Steamed Sliced Turbot Fish in Soy Sauce is a dish of white and firm fish topped off with parsley, before being drizzled with a light dipping soya sauce. The Signature Bean Curd Medley was an absolute winner for us. Fried beancurd slices are placed atop a bed of steamed beancurd, vegetables, and minced meat; then doused in rich oyster sauce. It was stunning; this dish was a majestic one both in taste as well as appearance.

You definitely need a bowl of white rice to complement this dish. Happiness can be so simple sometimes—just beancurd and steamed white rice.

For those who want a healthier choice, Si Chuan Dou Hua Restaurant offers all diners the option of brown rice, as a healthier alternative, absolutely free of charge. 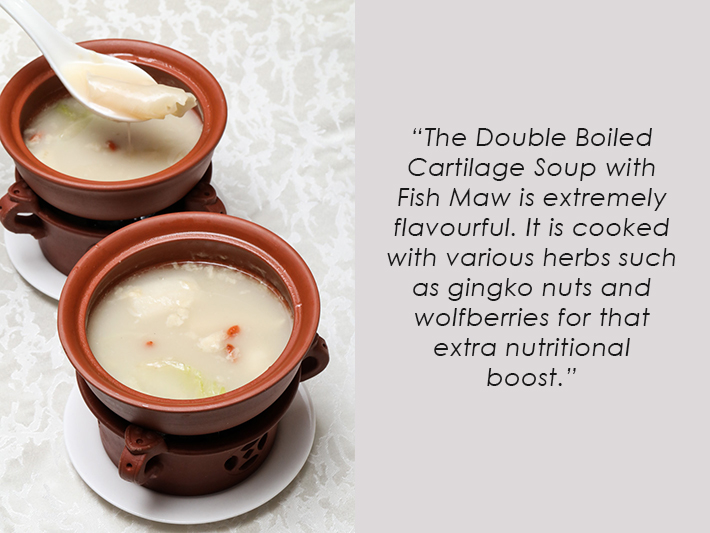 As with every Chinese meal, a soup is necessary to complete your dining experience.

We were treated to Chef Leung’s Double Boiled Cartilage Soup with Fish Maw. The extremely flavourful and thick soup is boiled for at least 7-8 hours together with various herbs such as gingko nuts and wolfberries for that extra nutritional boost. 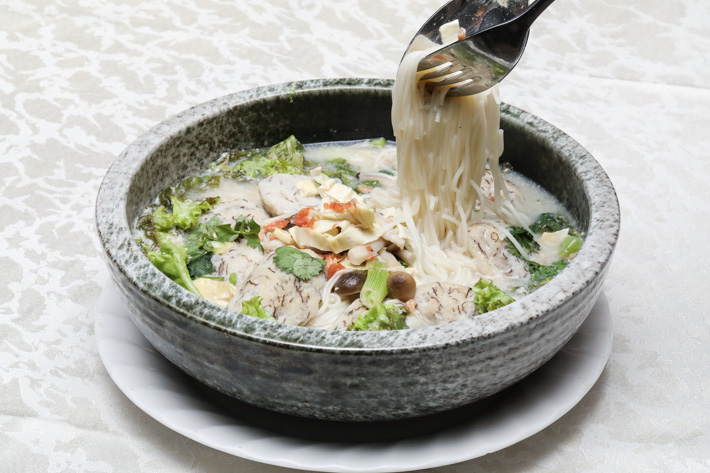 Just for Si Chuan Dou Hua restaurant’s 6th anniversary, Chef Leung also created the Fish Paste Mee Sua Soup in “Shun De” Style, which is served to diners through Gueridon Service. Shunde, hometown of Chef Leung, is a district in the Guangdong province and it’s said to be the place where many famous Cantonese chefs hail from. Shude as a style of cuisine, sees simple ingredients transform into exquisite delicacies.

This dish boasts a liberal serving of fish paste that is a combination of Mud Carp, Pearl Garoupa and black moss, cooked in a rich fish broth and soybean for a few hours. Completed with sakura prawn and meesua, this dish is a hearty and comforting dish for all. 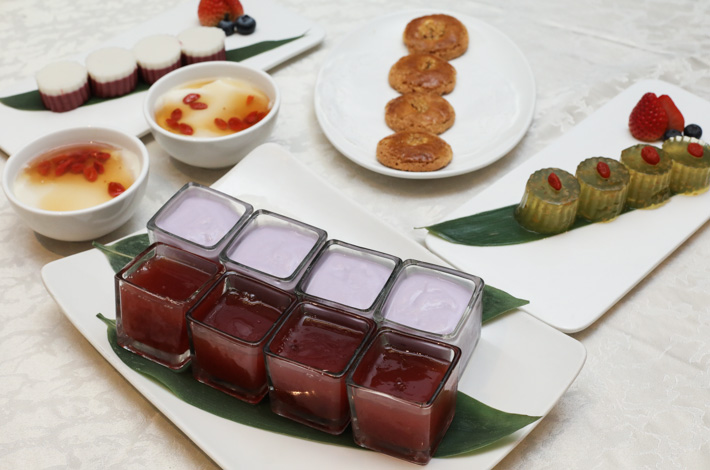 To end off this exquisite dining experience at the Si Chuan Dou Hua Restaurant, we could not help but marvel at the beautiful Dessert Fantasy, which features a series of sweet desserts such as flavoured jellies and walnut cookies. Well, no one leaves Si Chuan Dou Hua without a serving of this. One of the signatures that we relished, in particular, was the Homemade Bean Curd with Wolfberry. The warm and soothing soft beancurd served with a generous helping of wolfberries added the perfect finishing touches to this fine culinary experience and left us with a sense of nostalgia and the hunger for more.

If it is going to be your first time dining at Si Chuan Dou Hua at PARKROYAL on Kitchener Road, let it be over this new set menu. At S$78++ for 2 pax (with a minimum 4 to dine), it is really a steal for you get to savour all the representative dishes. It is like having the best of the bests in one seating, and at a price tag that is more than reasonable.

When visiting, do make sure to also take the opportunity to ask their Tea Masters to serve you a cup of tea through long-nosed bronze kettles to complete your authentic Sichuan and Cantonese cuisine experience, which we assure you that you will not regret. Tea and pickles are a compulsory charge at SGD5 per person.