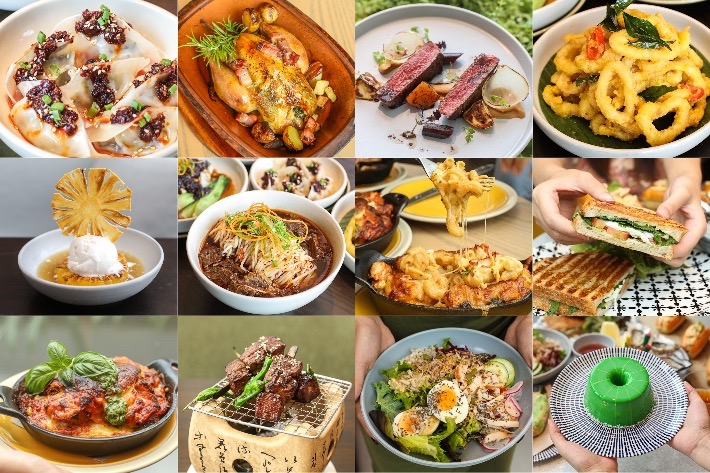 Occupying floors 25 to 39 of the Duo Tower and towering over the beautiful Kampong Glam enclave is the latest lifestyle hotel brand, Andaz Singapore. Boasting marvellous skyline views and a sensational snippet into Singapore’s vibrant dining scene is Alley on 25, an immersive novel dining concept that shares the hotel lobby of Andaz Singapore.

An F&B destination in its own rights, you’ll find various different restaurant concepts, a bar and a lounge that cohesively share the space; each of them with its own identity and no two concepts are alike. It is like stepping into a different world despite being in the same zone; it is one enthralling alley.

Inspired by Singapore’s vast and fluid dining culture, tuck into a splendid array of edible delights from hearty stews and family-style roasts from The Green Oven, charcuterie, a variety of cold dishes and locally-inspired desserts from Icehaus, to rustic modern Asian fare from Smoke & Pepper.

The truth of the matter is, whichever dining concept you choose to dine at, you can be certain that the impeccable service standard at any of their 5 restaurant concepts will have you feeling pampered from head to toe, and leave your taste buds sufficiently satisfied. Here’s every reason why Alley on 25 should be on your go-to list. During lunch, Icehaus has a semi-buffet lunch concept whereby you can opt for the full spread of edible delights for only S$18++/ pax. Tuck into the likes of freshly baked bread from the local bakery, Tiong Bahru Bakery, a well-stocked salad bar, as well as unlimited amounts of charcuterie, cheese, soft-serve ice cream and iced tea.

Guests hankering for a light yet satisfying desserts can also opt for Icehaus’ famous desserts that beautifully encompass the elements of local street sweets but with a modern approach. 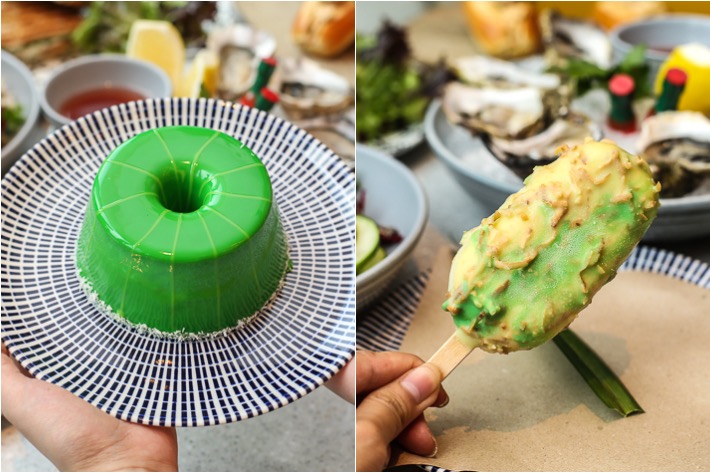 We are huge fans of their Pandan Chiffon Cake (S$14++) as well as their Andaz Chendol Pop (S$10++). The former really took us by surprise with its heady pandan aroma and decadent yet light mouthfeel, and the latter in itself was such a joy to eat (and look at). Meandering down the alleyway, guests will surely be drawn to the sounds of clanking metal and a strong scent of stir-fried delights wafting through the air courtesy of Auntie’s Wok and Steam. The restaurant emulates Singapore’s zichar scene but with a hint of Szechuan influences thrown into the mix.

The result? An array of hearty zichar-style dishes that pack massive flavour, heady wok hei and a fiery kick. 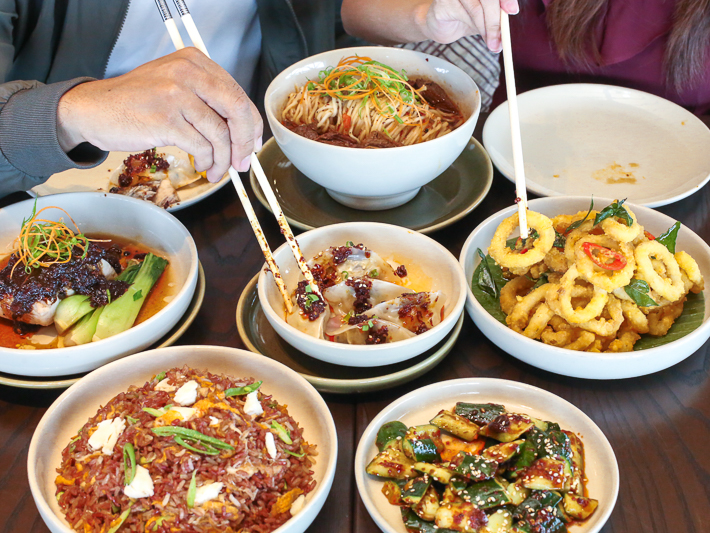 Diners can also look forward to a smorgasbord of dim sum offerings in addition to classic rice and noodle dishes.

A variety of the signatures from Auntie’s Wok and Steam include Double Boiled Beef Short Rib (S$22++) that comes with hand-stretched egg noodles and a spicy Szechuan broth, Jiao Zi Dumplings (S$12++ for 6 pieces) as well as Organic Fried Rice (S$18++) that comes with massive chunks of crab meat.

Currently available for dinner service only, Plancha’Lah! is where one can find a multitude of premium ingredients spanning from all corners of the Pacific Rim—from Japan to as far as South America—all expertly prepared by a team of seasoned teppanyaki chefs.

The live culinary theatre that features an open flat top, also known as a plancha is a true spectacle to behold.

Combining both the precision and sophistication of Japanese teppanyaki techniques and a wide array of international dishes such as Hokkaido Scallops, Grass-fed Black Angus Tenderloin and Patagonian Toothfish, what diners can expect is no less than culinary finesse with a hint of dramatic effect.

We absolutely love their Patagonian Toothfish “en papillote” (S$42++) and their Grass-Fed Black Angus Tenderloin (S$35++), both of which boast a superb sear before being tossed around with a combination of seasonal root vegetables.

And what better way to round off our meal than with their must-try Pineapple Flambé (S$15++). Perfectly seared on the flat top with lots of clarified butter before being a shot of tequila is added for an added kick (and dramatic effect), this savoury-sweet dessert is literally the best thing one can have after a hearty meal. 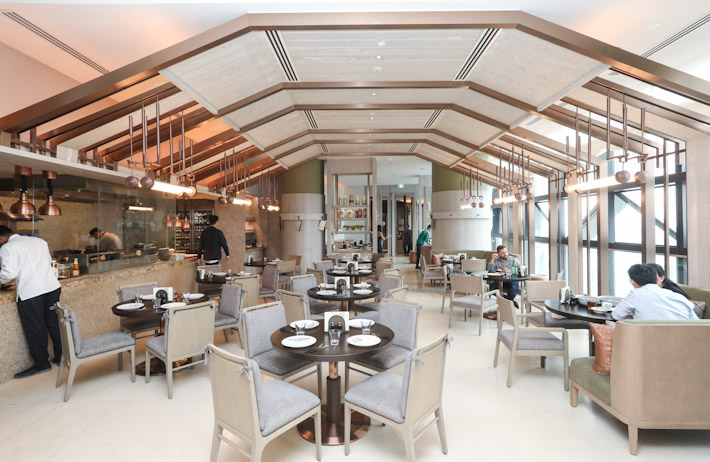 Dishing out primarily Asian-focused fare with a touch of modernity, Smoke and Pepper impresses with not just their stellar interior furnishings, but with their food as well. Perhaps the largest dining destination at Alley on 25, this humble restaurant entices with its barbecued specialities that are prepared over an open-fire grill. 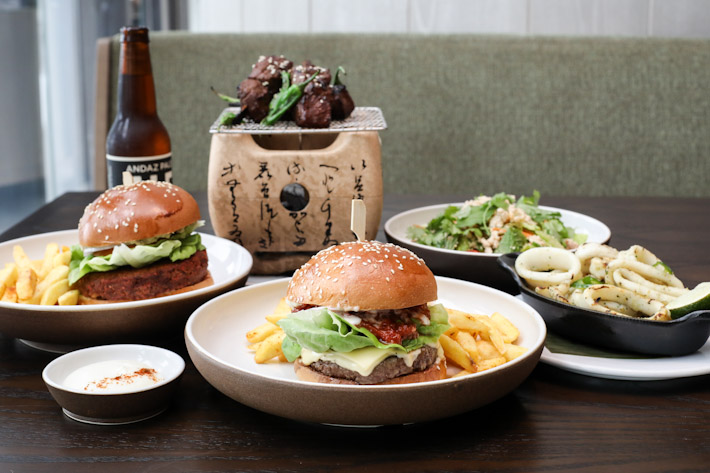 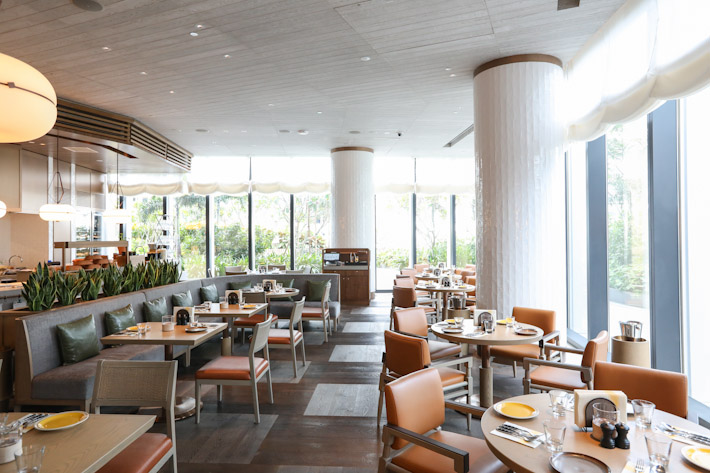 For those who crave all things homey, comforting and meaty, The Green Oven works up the ultimate treat. This restaurant is where one can tuck into a myriad of classic international fare, prepared from the heart of the kitchen, that is within the confines of the restaurant’s massive green-colour Beech oven. These homey, soul-warming dishes are a favourite among many and will definitely delight every palate.

Too tired to wake up for brunch on weekends? Now, you can sleep in and still have an awesome breakfast/brunch meal at Andaz Singapore! Alley on 25 just launched their new “Lazy Breakfast” from 11.30am to 2.30pm daily, priced at just S$35++ per pax (Child S$17.50++). You can enjoy unlimited offerings at their breakfast buffet spread, including one a la carte dish of your choice. For another S$35++, you can enjoy free-flow Proseccos, wines and draught beer.

A la carte items include Eggs Benedict, Steak and Egg prepared with Australian Sirloin, Breakfast Burger, Smoked Salmon Bagel, Breakfast Quesadilla and Grilled Pastrami & Cheese Sandwich. Besides the a la carte dish, stuff yourselves with their huge variety of items in the buffet spread that features pastries from Tiong Bahru Bakery, gluten-free cereals and even Asian dishes such as congee and dim sum.

This post was brought to you by Andaz Singapore.