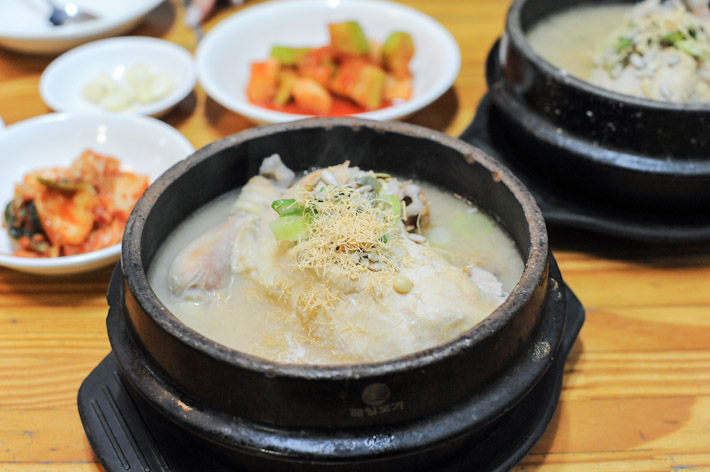 Talk about Samgyetang (Korean Ginseng Chicken Soup) in Seoul and many will point you to Tosokchon.

There are often arguments about how Tosokchon is touristy/ meant for tourists, but there is no denying that this institution serves one of the best Samgyetang renditions in Seoul. And it is actually pretty reasonably priced!

If you haven’t already tried it, here’s what you are missing out on. 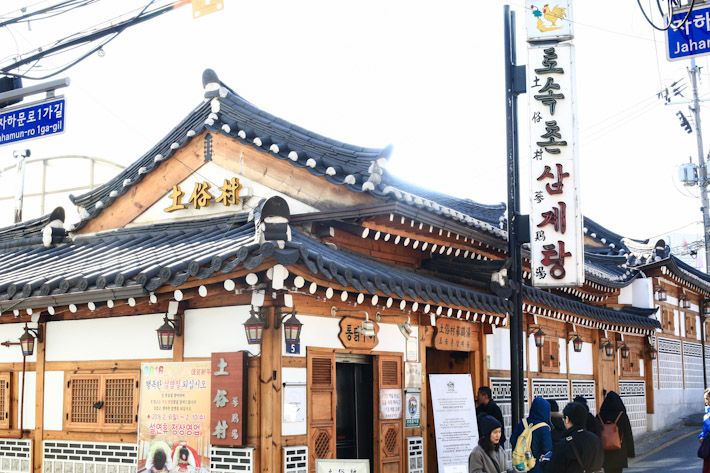 Tosokchon is a stone’s throw from Gyeongbokgung Station, making it a common pit stop after a visit to Seoul’s most famous Imperial Palace. The restaurant is said to be frequented by Korean’s late President Roh Moo-hyun. 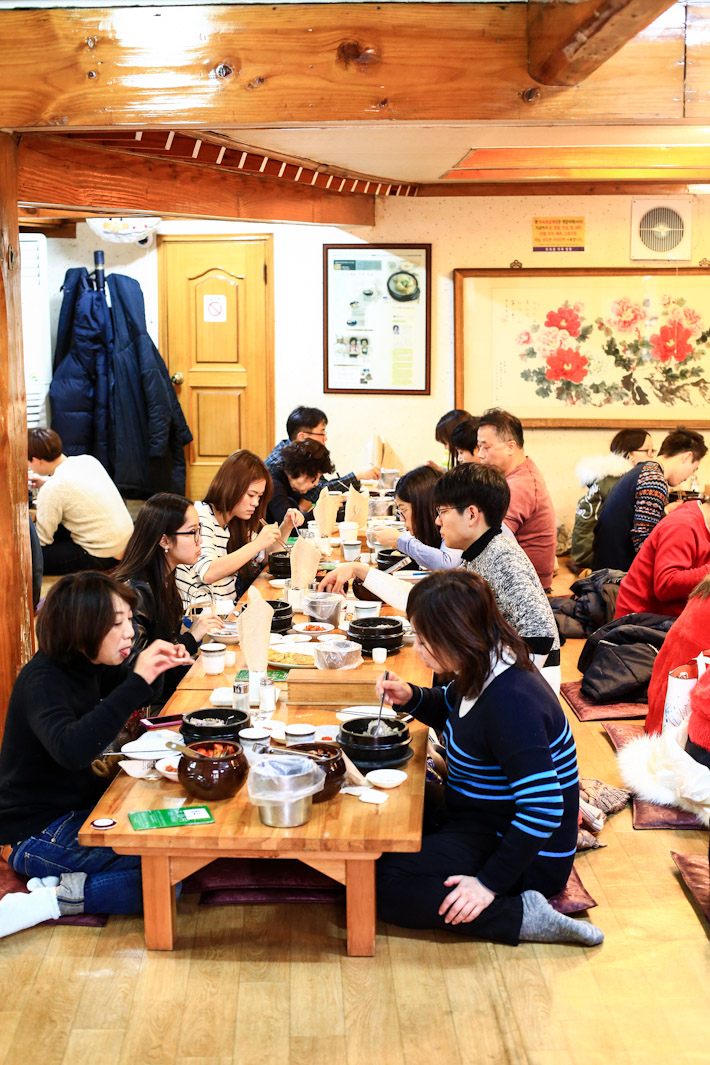 Queues are not uncommon at Tosokchon but the wait is not long; the Hanok-style restaurant has a seating capacity of approximately 400, hence the relatively easy waiting time. We also love the traditional seating style on wooden floors and eating on old-school wooden tables. 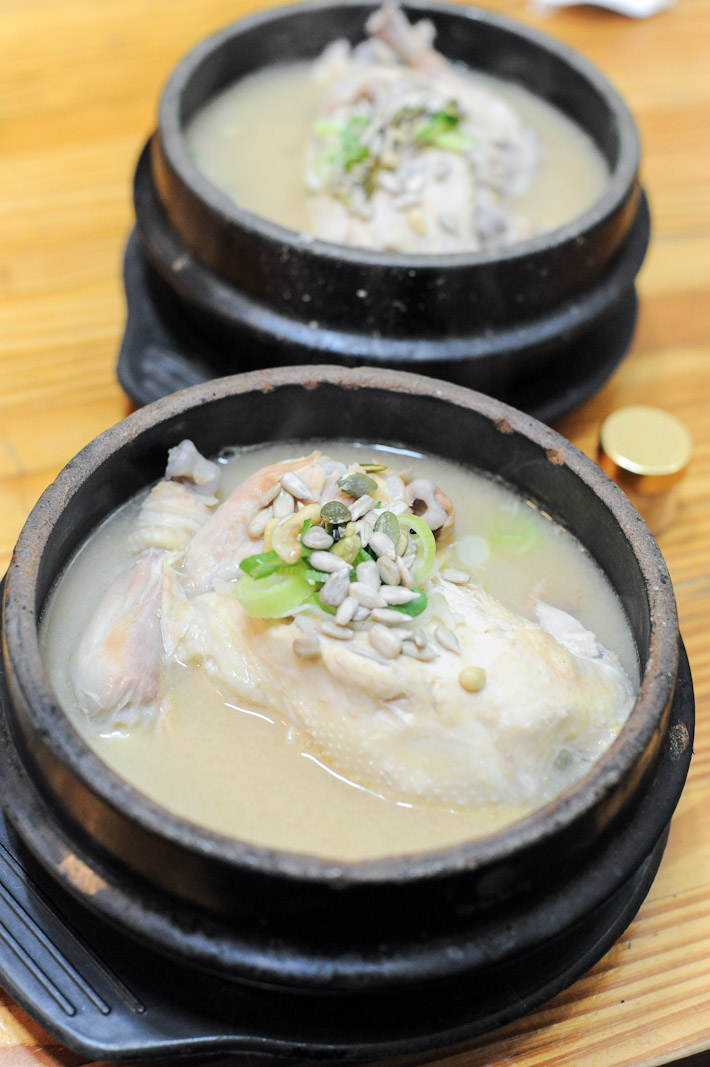 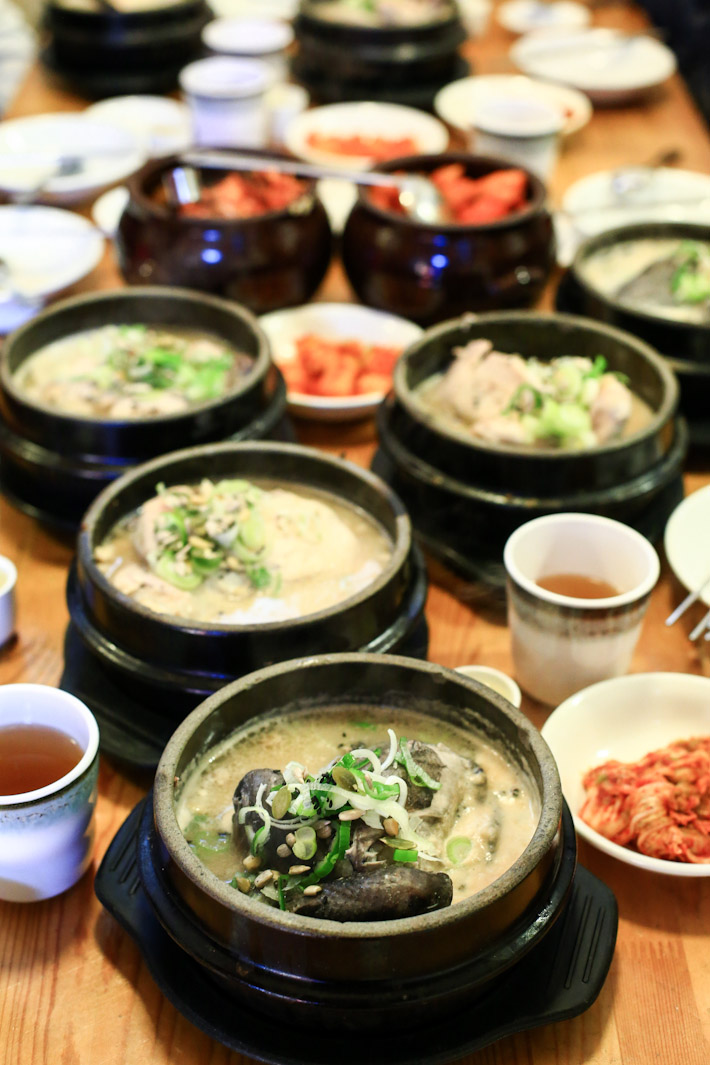 A whole chicken stuffed with glutinous rice sits in a bowl of milky broth that is also filled with garlic, dates and ginseng shreds; the chicken is so tender that the flesh falls off the bone with just a tug.

You can also opt to add wild ginseng roots to enhance your soup for an additional W6,000. To be honest, we thought that it did not make a big difference to the taste of the soup.

If you are one who fancies your food strong-flavoured, there is a jar of salt where you can help yourself to. They serve really good kimchi that you can eat all you can, too.

Really, guys. Don’t be too bothered by what people say about Tosokchon being touristy. You have to try it to believe how good it is. Tosokchon has the best Samgyetang in Seoul.

For more recommendations on the best places to visit in Seoul, read our Seoul’s food and travel guides.

@Sante Yes it does! Actually the normal portion would be 1 bowl of samgyetang per person. It’s quite huge, considering you got a whole (small) chicken + glutinous rice inside all for your self. But it tastes great, you should try this when visiting Gyeongbokgung

Hi.. Can we order for sharing? Like 2 for 3 people? And can we order without rice? Since the whole chicken is too many for 1 person plus the rice.. Thanks

Hi, would like to ask if they only have traditional floor seating as i am intending to bring my parents who have difficulty sitting on the floor and getting up afterwards. Thanks!

NEVER GO! The worst customer service ever. The servers rolled their eyes when I asked them for anything if not outright ignored me. The food was okay but couldn’t really trust that hygiene was up to par. They also pushed customers into getting one type of dish for turnover by saying that the other takes longer.

Extortion by definition. 18 dollar for a smallest chicken I’ve ever seen. I could of had the same for half the price somewhere else. Only went because my visiting friends wanted to but never going back again.