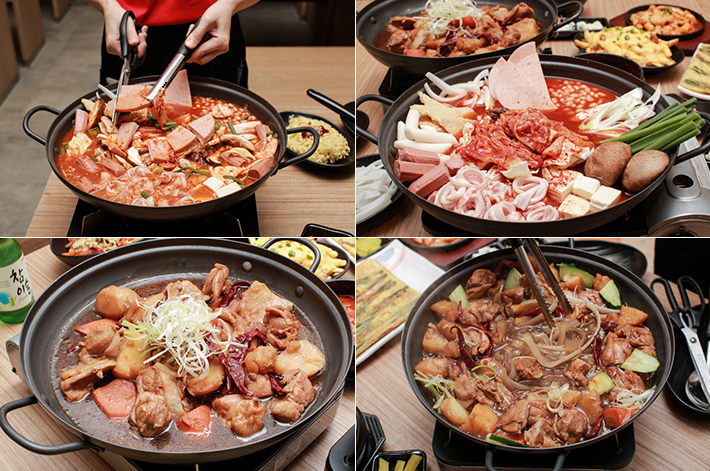 With so many Korean food places popping up all over Singapore, we can safely say that the Korean wave is not losing its popularity in this city anytime soon. Apart from the usual K-bbq and bibimbap, a rather underrated Korean dish called jjimdak deserves to be glorified too. The words ‘jjim’ refers to ‘braise’ and ‘dak’ refers to chicken, and a Korean jjimdak is really a tasty chicken stew braised in soya sauce and is usually slightly sweet.

Located in City Square Mall, Seoul Jjimdak is a Korean restaurant that specialises in authentic Jjimdak, and it is one of the very few destinations in Singapore where you get to savour this hearty Korean stew. The best part? Prices are wallet-friendly, portions are generous and needless to say – the food is legit and authentic!

From now till 31 August 2016, Seoul Jjimdak is extending an exclusive 51%* off Jjimdak and Budae Jjigae (Korean Army Stew) during lunch every day. All you have to do is flash this article or quote ‘ladyironchef’ to Seoul Jjimdak’s staff. Set foot into Seoul Jjimdak and you will be instantly greeted by pop art murals of famous Korean celebrities and catchy K-pop tunes. It is one of those Korean restaurants with very comfortable seating; finally an outlet where we can enjoy our Korean meal in comfort.

As its name implies, everyone goes to Seoul Jjimdak for their Seoul Jjimdak (S$33.90++). The owners are trained in Seoul, and the culinary team have rich experience dealing with Korean food. 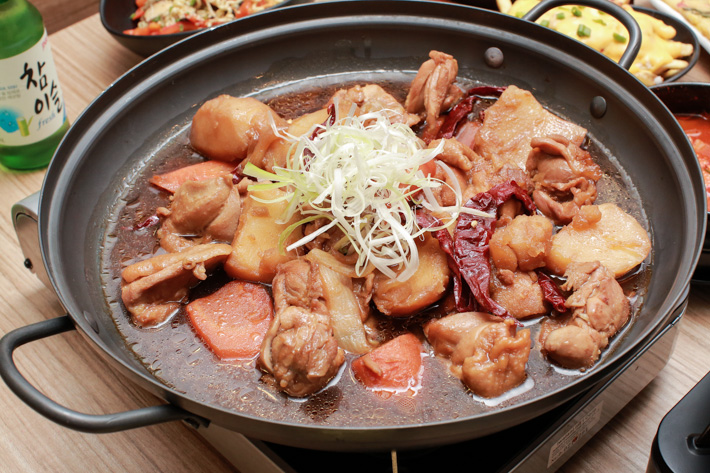 The portion of the jjimdak is huge. Integrating soya sauce imported directly from Korea with chicken, potatoes, carrots, onions and potato noodles, the stew can easily feed two to three people. The braise is a mix of salty and sweet, with the vegetables attributing largely to the sweetness. We were instantly hooked to the fork-tender and succulent chicken that have been braised to absorb the flavours of the sauce.

Dining solo? Order the “Mini” Jimdak (S$12.90++). Seoul Jjimdak is probably the only place with a one-pax option, and it really solves the problem of always having to gather more friends just to satisfy a Korean stew craving.

The next bestselling dish is none other than the tasty Budae Jjigae. The Korean Army Stew was actually created out of famine during the Korean War, where the Koreans had to make do with leftover food from US Army – hence its name, or also otherwise known as Budae Jjigae. Today, the well-loved stew is synonymous with a good Korean meal, and we have just found another reliable and affordable option. At S$33.90++, this homemade kimchi stew – which feeds up to three pax – is served with baked beans, luncheon meat, pork belly strips, tofu and mixed vegetables. Similarly, add-on options are available, including carbs such as Ramyeon (S$2.90++) and Steamed White Rice (S$1.50++). 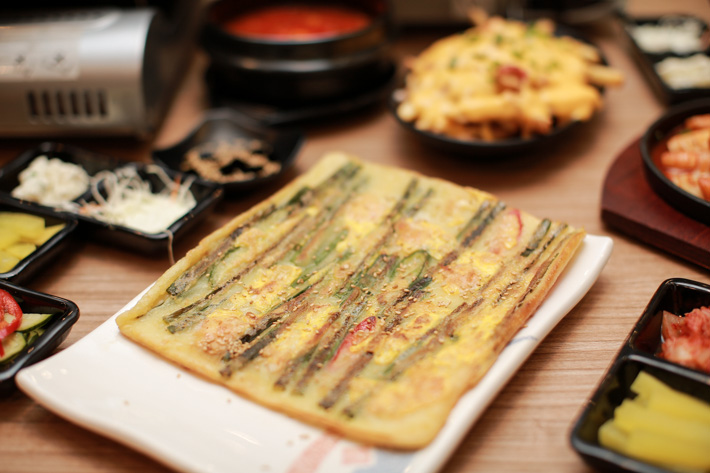 Now, let’s move on to the side dishes. Seoul Jjimdak’s chef-recommended Seafood Pancake (S$14.90++). The flat pancake is heavy with ingredients – with green onions, prawns and squids; crisp on the outside but moist and fluffy inside.

Koreans do their instant noodles really well. The Chicken Bulgogi Ramyeon (S$11.90++) is when you just want a simple and fuss-free lunch. The chicken is marinated with bulgogi sauce, and the ramyeon (instant noodles) is cooked with sliced capsicums, onions, mushrooms and sesame. 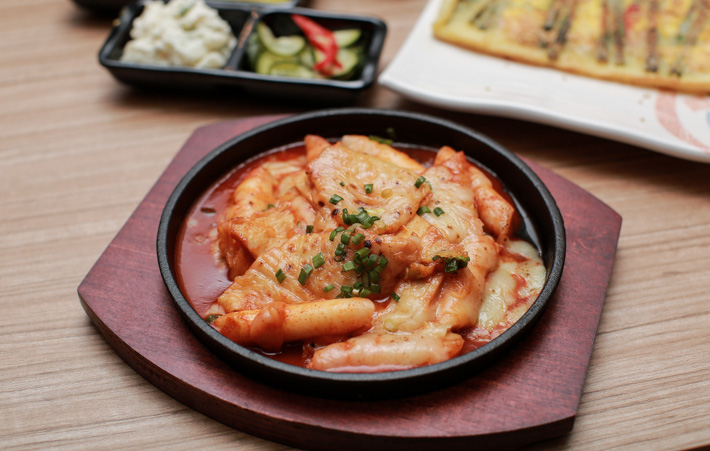 The soft and chewy rice cake that Koreans know as Tteokbokki is a must-try. Seoul Jjimdak’s interpretations are available in either Spicy Cheese Tteokbokki (S$11.90++) or non-spicy Royal Court Tteokbokki (S$10.90++). We thoroughly enjoyed the spicy one, with melted cheese covering the fish and rice cakes and drenched in hot and spicy sauce. 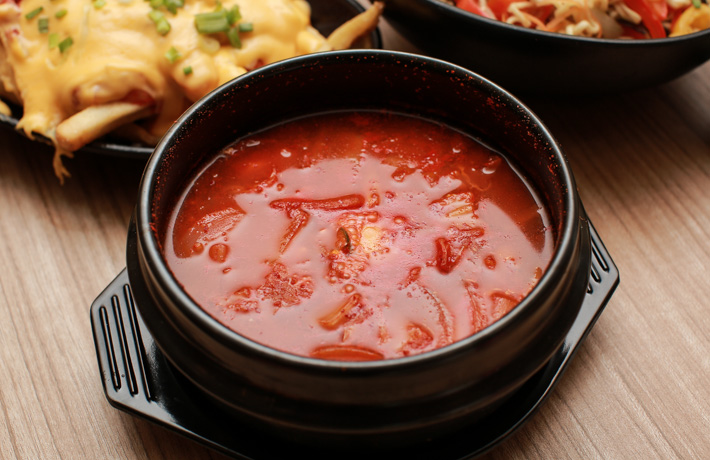 Seoul Jjimdak’s value-for-money lunch sets are some of the best deals in town. The sets range from S$9.90++ for a Kimchi Tofu Soup with Rice to S$12.90++ for Mini Boneless Jjimdak with Rice. Each set meal comes with a complimentary soft drink, and is valid from 11.30am to 5pm daily. 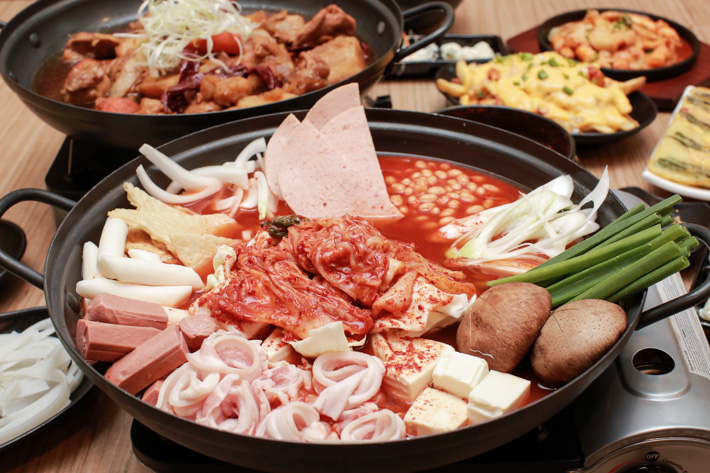 From now till 31 August 2016 (between 11.30am – 3pm), Seoul Jjimdak is offering a massive 51% discount off Seoul Jjimdak and Budae Jjigae (Korean Army Stew) to celebrate Singapore’s 51st birthday. Say whaaat?! This is the best deal ever!

Simply flash this post to the Seoul Jjimdak’s staff or quote ‘ladyironchef’. Think about it – you are only paying S$16.60++ for an authentic Korean stew that can feed two to three persons. In case you think we are kidding you, the portions remain the same; you are really getting the full works at half the price. This just gave us another reason to look forward to lunch.

This post is brought to you by Seoul Jjimdak.