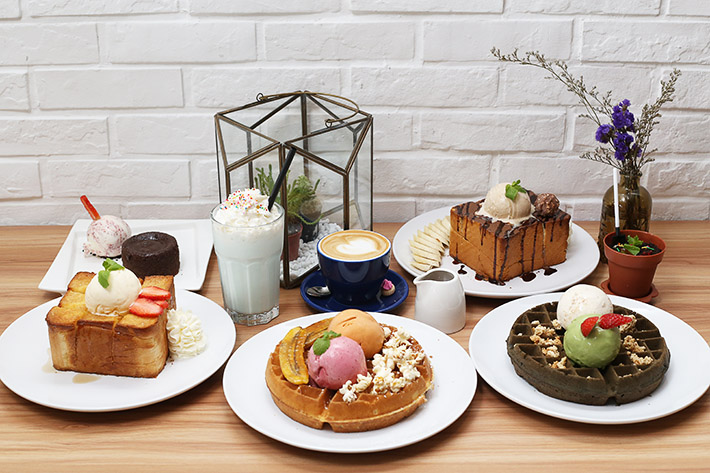 Gelato is always a good idea, especially with Singapore’s humidity. Gelato is loved for being a healthier option as opposed to ice cream because of the lower fat content and use of better ingredients.

This humble gelato parlour has won us over with their no-frills concept that focuses on serving quality desserts. From now till 31 March 2016, readers of ladyironchef can flash this post or quote “ladyironchef” to enjoy 50% OFF the 2nd Waffle/ Shibuya Toast (of same value or lower) purchased from Mondays to Fridays. 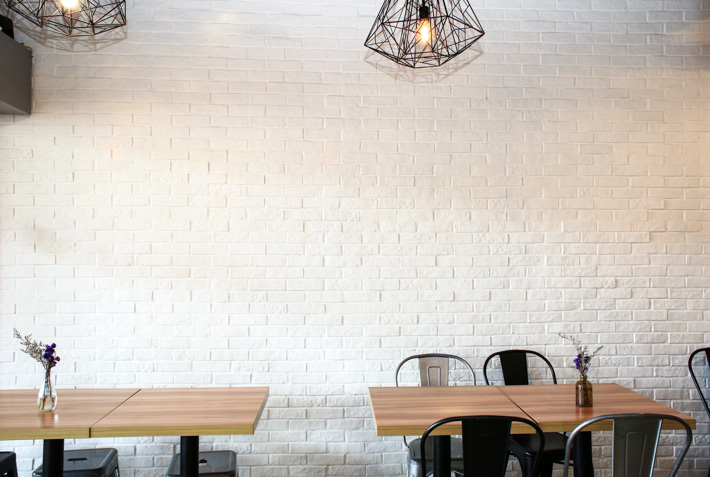 The cafe takes up one shop space along the row of shophouses and is a cosy and modern space amidst the rustic neighbourhood charm. The interior is minimalistic yet comforting – great for a midday or post-meal hang out spot over sweet treats, coffee and light savoury bites.

We love how the cafe is so ideal for photos. Natural sunlight streams in through the glass panels in the day. Every table is evenly spaced out and nobody will feel intruded. Potted plants are placed sporadically. Light music on the loop. The brick wall makes a great backdrop for our desserts.

Among the many, Double Scoops is indeed the best artisanal gelato cafe in Ang Mo Kio. 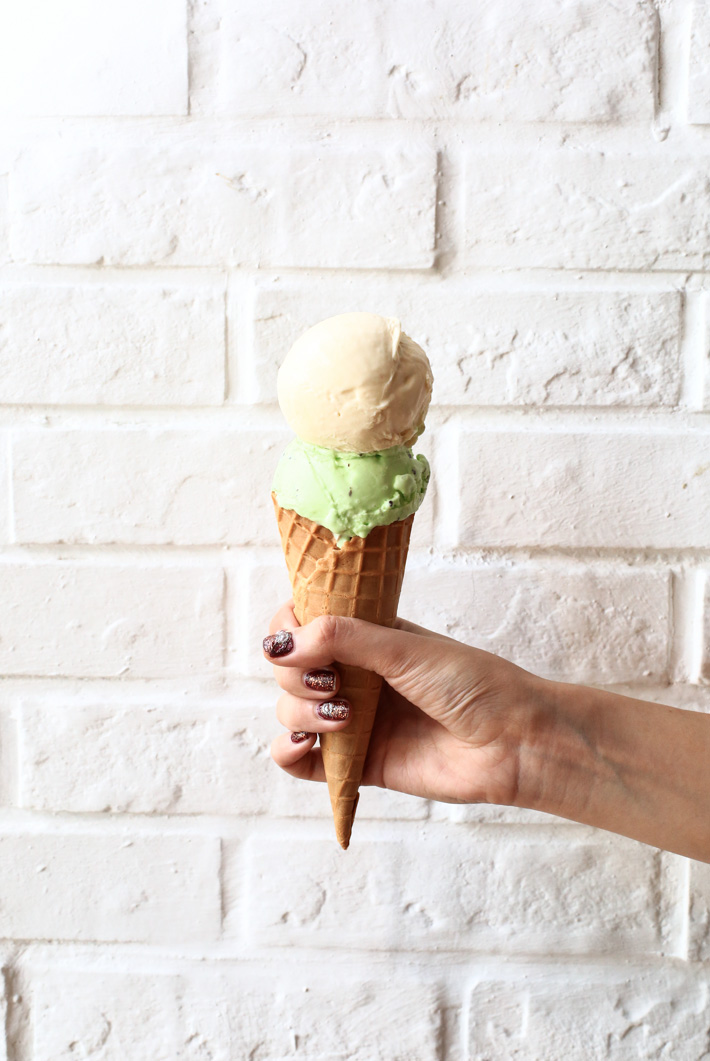 LOW-FAT GELATO WITH ONLY 8% FAT

Double Scoops makes their own gelato in-house daily. Smooth and fresh, the flavours are aplenty. Some are on rotational basis, but the mainstays that you totally have to try include Thai Milk Tea, Baileys, Sea Salt Gula Melaka, Orh Nee and Speculoos.

If it is your lucky day, you might have a chance with the limited flavours of Salted Egg Yolk and Matcha Kit Kat.

The gelato are good on their own, and can be served in cups or cones. But to up the game, we say go for the waffles and thick toast with ice cream. Double Scoops – but of course, right? No pun intended. Your regular selection of coffee is available, starting from S$4. Brewed tea ranges from Chamomile to Peppermint. But for some fun, we suggest going right for a Soda Float (S$4.50) or an Ice Cream Shake (S$6 with a choice of 2 scoops).

An Ice Cream Shake is a great to-go option if you are in a little rush to sit down for a scoop of gelato. Talk about best summer treats! 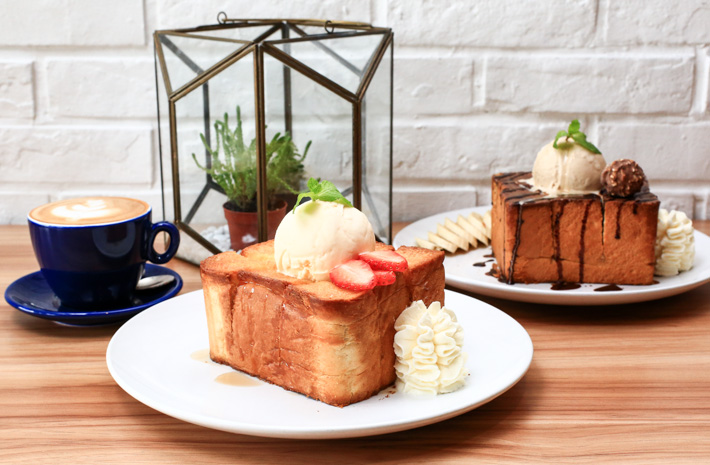 Everyone’s no stranger to thick toasts, yes? We love ours topped off with ice cream. Double Scoops offers two choices – a classic Shibuya Honey Toast (S$10) and a Nutella Banana Toast (S$11), each with one scoop of gelato of choice. 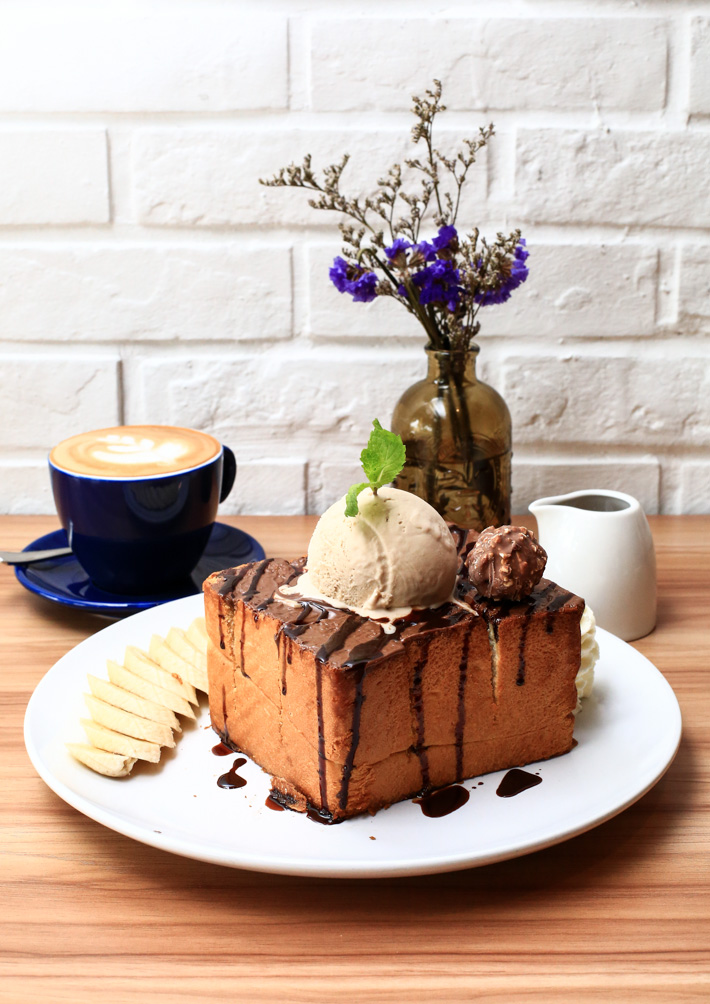 While honey toasts are evergreen, it was the Nutella one that tugged our heartstrings. But of course, right? Nutella is always wonderful, especially when lavishly drizzled over a thick toast alongside smooth, premium gelato. We had ours with a scoop of Earl Grey Lavender ice cream and the fragrance sure balanced out the sweetness of the dessert.

We do recommend sharing the toast as the serving is really generous! 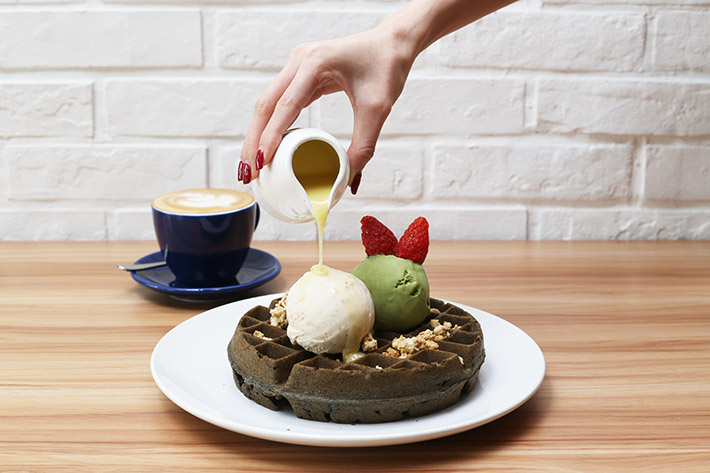 With the rise of sexy black desserts, we were initially more drawn to the former. However, we actually preferred the batter on the classic waffle as it was fluffier and more fragrant, with a nice crisp exterior.

That is not to say that the charcoal waffle option is to be overlooked though. If you want something more interestingly-flavoured, this is it. Accompanied with a beautiful rich valrhona white chocolate ganache sauce, the charcoal waffle is also jazzed up with crunchy maple pecan granola and strawberry bits. 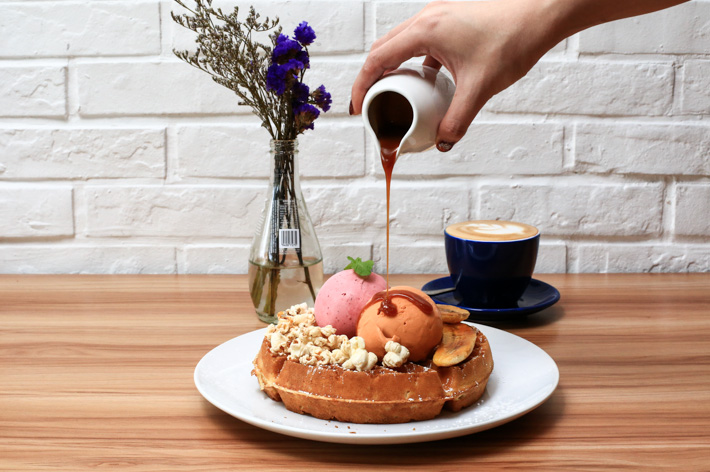 A premium gelato flavour that we enjoyed our waffles with is the Bailey’s flavour. We have had many Bailey’s ice cream and gelato in our lives, and this by far, took first place for us. The flavour and texture were just right, and the alcohol was generous yet did not overpower. 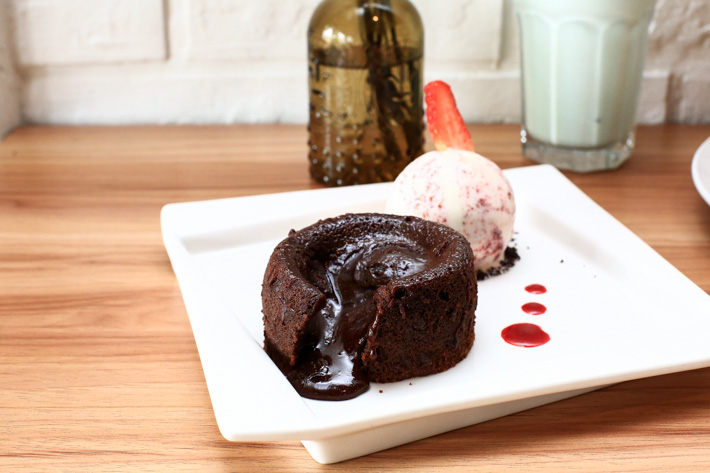 The Chocolate Lava Cake here at Double Scoops is pretty decent. It comes with a drizzle of raspberry sauce and your pick of gelato. This is best eaten immediately for the nice mixture of warm chocolate fudge and cold ice cream, and when your lava still flows. 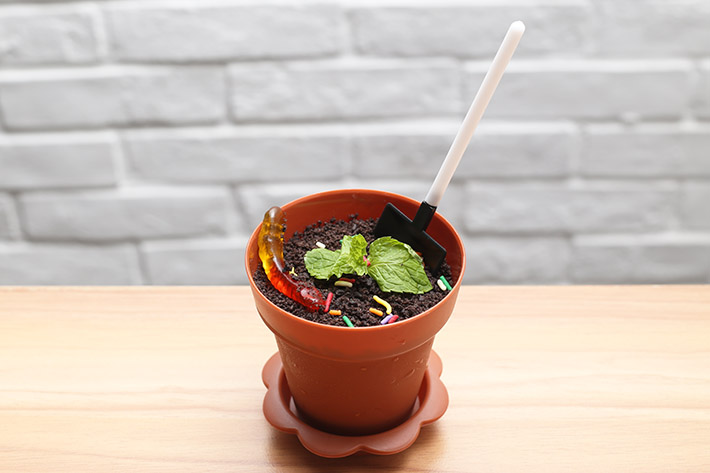 The Gelato Flower Pot here may be nothing to shout about, but your kids are definitely going to love it. Your gelato of choice is packed into a mini plastic ‘flower pot’ and topped off with bits of crushed oreo and served with gummy worms.

We like the thoughtful touches of a plastic ‘spade’ spoon and garnishing of a herb as the ‘leaves’ of the plant.

50% OFF DESSERTS AT DOUBLE SCOOPS

From now till 31 March 2016, readers of ladyironchef can flash this post or quote “ladyironchef” to enjoy 50% OFF the 2nd Waffle/ Shibuya Toast (of same value or lower) purchased from Mondays to Fridays.

This post is brought to you by Double Scoops.

Sounds like an interesting cafe, definitely checking it out soon! Just wondering if the price stated is before or after the 50% discount? (:

@Xin The prices stated are before discount.