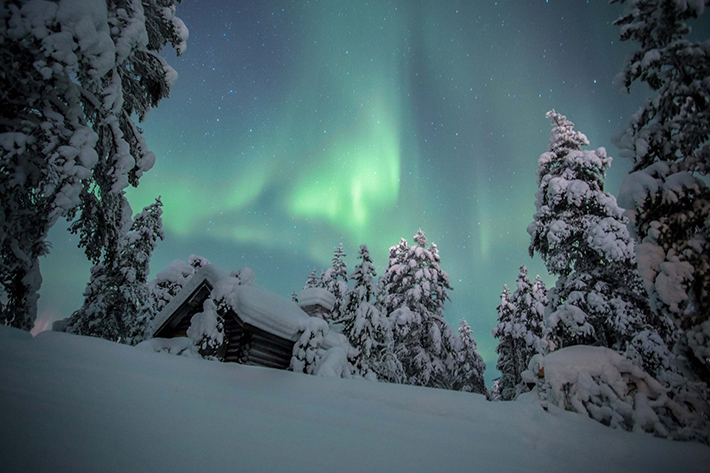 The aurora is a jaw-dropping natural light phenomenon that has been fascinating human civilisations since medieval times. These stunning displays are not related to the supernatural, but are simply a result of the collision between earth’s gas atoms and charged particles from the sun’s atmosphere.

Auroras take place in high-latitude regions and one can witness these spectacular formations at either of the magnetic poles during specific periods each year.

In the Northern Hemisphere, the auroras are known as ‘Aurora Borealis’, while auroras in Southern Hemisphere are called ‘Aurora Australis’. There are many aurora variations and they could exist in blue, green, pink, red and/or ultraviolet colours. Similarly, the shapes of the Northern and Southern lights could vary from curtain-like arcs to diffused flickering patches.

In this installation, we share more about Aurora Forecast for 2016 and the 5 Best Places to Catch Them.

Although Finland’s aurora season might stretch across for almost half a year, there are only an estimated 20 nights out of this period where all stars are aligned for you to catch the aurora. Simply because not all nights are cloudless; it is ultimately all about being timely and lucky. Your chances are increased between 7pm to 2am.

Levi and Saariselkä in Finland are popular ski resorts in Finland for aurora viewing.

Icelanders are terribly spoilt when it comes to witnessing the breathtaking auroras. They can catch the Northern Lights almost all year round and even within capital of Iceland’s proximity!

Drive 15 minutes away from Reykjavik city and towards Bessastadir area to catch the dancing lights from afar. Or if you would like a closer view, then take a five-hour one-way car journey to Jökulsárlón Glacier Lagoon for an unrivalled experience.

Located right above the Arctic Circle, Norway is truly befitting of its title “Kingdom of Light”. Head to Northern Norway or the Svalbard Islands for a spellbindingly beautiful light show.

Based on scientific studies, Northern Norway is definitely the best place on earth to view the Northern Lights. This is due to the fact that the aurora belt hits Northern Norway’s Lofoten Islands and the lights continue its trajectory towards North Cape. We bet you did not know that the breathtaking auroras can too be admired from United Kingdom! As mentioned previously, extremely clear and dark skies are key conditions to spot auroras with your naked eyes.

The Scottish islands of The Outer Hebrides and Scotland’s archipelago Shetland are prime aurora viewing spots due to their minimal light pollution and low population.

Sweden has several spots during wintertime that are excellent for viewing the Northern Lights, namely Abisko National Park’s Torneträsk Lake and Jukkasjärvi Village. Both locations are extremely remote – after all, you can only spot the auroras during winter when the sky is clear and dark.

The village of Jukkasjärvi is home to one of the world’s first ice hotel where staff can arrange guided tours to catch the aurora borealis.

Disclaimer: The above dates are an approximation based on the past few years’ aurora periods and intended to serve as a rough guide to aid those who wish to plan for their trips next year. Nature is essentially unpredictable and it is very hard to pinpoint down to the exact dates even with data.