Before I start, I have to admit that I know very little about Mexican food, so I can’t really talk with any real authority about it. But my friend Mike and his Latin American friends have been to many Mexican restaurants and they agreed that Casa Latina restaurant at Waterloo street serves the best Mexican food in Singapore.

While there are quite a few Mexican Restaurants in Singapore, most of them are offering Tex-Mex cuisine. Casa Latina, on the other hand, prides itself on serving authentic Mexican food. From the brief encounter with the chef, I understand that he has many years of experience in cooking Mexican food, and the restaurant actually import most of their sauces and spices directly from Mexico. 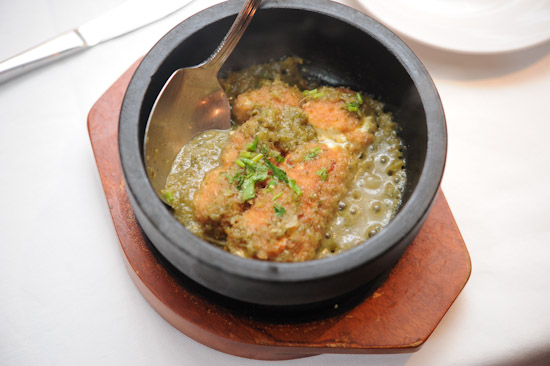 Casa Latina Mexican Restaurant has a rather extensive menu: there are around 17 appetisers/soup/salad ($12-18); over 20 main courses which comprise meat and seafood ($20-34); and 4 desserts ($8-9). With so many items to choose from, it is naturally advisable to come with a group of friends so that you can order more and share. Since there was only two of us that day, we ordered 4 items and spent about $40 each.

We started with Casa Latina’s Melted Cheese ($16) and it was very very good. The Ceviche Estilo ($20) – pictured in the opening of this post – was also a great appetiser. Shrimps cooked with tomatoes, onion, coriander and fresh chillies; very fresh and appetising. 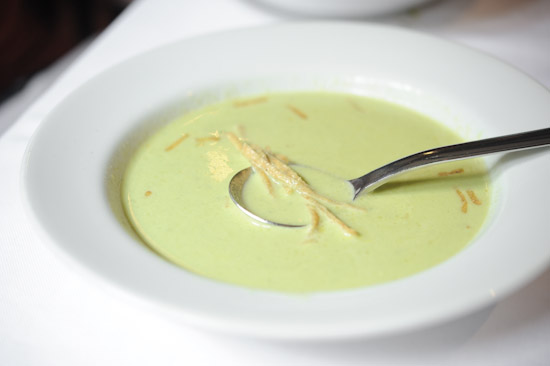 I don’t usually order soup when I am dining out in restaurants. To me, it seems a little silly to pay so much for soup – I’d rather get an additional dessert. But Mike spoke highly of the chilli poblano soup ($10), so I had to try it for myself. Intriguing is the only word to describe it. 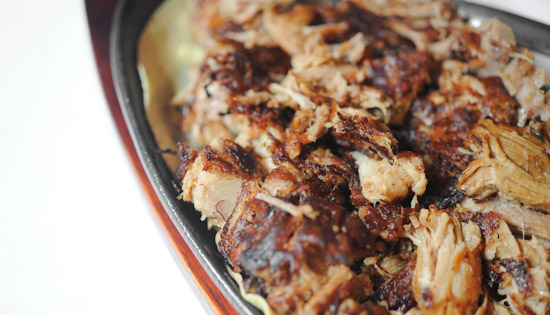 The photo above doesn’t really do justice to the Las Carnitas ($29). The amazing pork confit was served with corn tortillas and a divine Mexican sauce. Initially, I was eating the meat wrapped in the tortilla. But after a while, I was annoyed that the wrapping process was taking too much time, so I decided to eat the meat directly (without the tortilla). Yum. 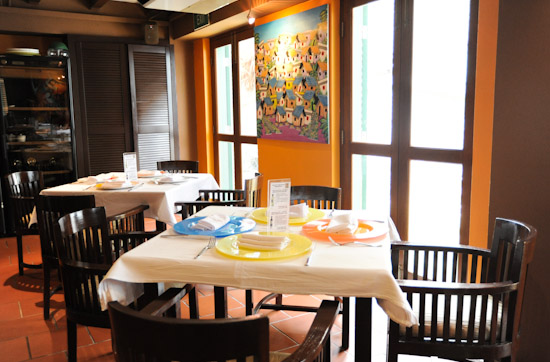 Most people usually mention Cafe Iguna or Margarita’s when you ask them for their favourite Mexican Restaurants in Singapore. Although Casa Latina has very good Mexican food, not many people know about them. I was there for lunch on a weekday and we were the only table. Mike told me that business is better during weekends, but no restaurant can survive solely on weekend crowd.

If you have always wanted to try Mexican food, I urge you to check out this Mexican restaurant along Waterloo street.

I am so glad you tried Casa latina, it is one of my favorite places to eat in SIngapore and I always worry they dont have enough customers i even grab a handful of there cards last time I was there to hand out to my friends, you didnt mention the key lime pie, next time try it is fantastic

I have tried many resturants from your blog and have not disappointed, but yesterday i went to Casa Latina Mexican restaurant and thought it was quite terrible.
Firstly we got our friend to order the pork dish your recommended, and when it came out it looked nothing like the picture. The mexican rice was too salty. The wait staff were terrible and really had no idea on what things were. They mixed the chicken and beef burritos and gave beef to a person who does not eat for religious reasons, and as there was such little meat in the burritos, the person did not realise till the end. When told they did not really seem to care. It was definitely overpriced for what it was and i will not be returning, i still prefer the mexican restaurants in Dempsey.

I have been several times to this restaurant, and I can only praise its food. As a mexican myself, I vouch for its authenticity, given that the chef/co-owner is also from Mexico.

@lav, what a shame you had a bad experience. I’d recommend next time to speak directly with one of the owners or the chef himself.

Yeah apparently you dont know much about Mexican food , i suggest you try Piedra Negra at Hadji Lane or Senor taco at Clarke quay.
Then you can come up with your comments of the best Mexican food in Singapore , there is no doubt your website still gives just an amateur comment trying to seem like a real gourmet.
As for your friend Mike , well if you bring Americans and Latin Americans to eat Mexican food what is the point of reference? that we live on the same continent , dude come on so a Chinese can verify if Malaysia food is accurate???
If you try to impress people with your blog believe me is only people who dont know anything about food.

agree with krish comments.i was there in weekend restaurant was packed but service were very attentive and food was excellent.ordered fajita chicken and chocolate tamal was really awesome,portion are huge and really value for money.
the best authentic mexican restaurant in singapore.

Just tried the restaurant. In a coincidence, I ordered almost the same items as you.

The waiter started us off with free chips and salsa. The salsa was below average. If you go to a mexican restaurant and the salsa does not impress you, then I will not consider it as a good mexican restaurant.

Then it was followed by chessy melt and ceviche. The chessy melt was the only one that is just acceptable, the ceviche was too sour for me and too big portion. The main course was las carnitas (pork). The pork was not juicy & tender, quite a bit overcooked. Totally disappointed with the food, money wasted.

I have tried so many so-called top food places, but for some reasons, I just cannot find really great & memorable western/international food in Singapore. For example: latin, italian, greeks, spanish tapas, vietnamese pho (any random vietnamese restos in California beat all “top-best” Vietnamese restaurants in SG), hamburger/hotdogs (any mom pop store in US, beat prive/relish/bbbs/etc in SG), HK and Shanghai, on the other hands, have many international restos I love.

I am from Mexico and Casa Latina is the best and most authentic Mexican restaurant in Singapore. Senor Taco is also excellent but you cannot compare the food to Casa Latina as they’re different types of Mexican Food. Piedra Negra has a lovely atmosphere, however, some of their dishes are very tex mex.

Of all the Mexican restaurants I’ve tried in S’pore, this is the only one where I’ve felt I was buying nostalgia instead of a meal.

Not quite like being back home (Mexico) but for being in Singapore, it really does hit the spot.

I went to Casa Latina this past Friday and it was the worst dining experience I have ever had in Singapore. For a Friday night, the place was not crowded. However, it appeared they only had 1 server and possibly one chef in the kitchen. One of the jugs of margaritas we ordered was more than half filled with ice. We sent it back and told them to take half the ice out and fill it back up. It took them over 1 hour to serve us our appetizers (chicken tostados and nachos). We actually had to ask about it twice. There was hardly any chicken in the chicken tostados. The nachos were ok. Then we waited another hour for our main entrees. Other tables with guests who sat after us and ordered after us were getting their food before us, including a table with double the amount of diners. We asked several times about our mains with no response other than I’ll check on it. No one bothered to come back and tell us what was going on. Finally, we were so annoyed, we told them to just bring our check for the appetizers and drinks we had consumed. This took another 20 minutes, whereby they proceeded to bring out 1 one of the entrees we ordered (chicken fajitas). The plate was not even sizzling. We said we didn’t want the food at this point, we asked 2 different people for the check. Their excuse was that because my husband ordered his argentina steak medium well, it was taking them longer to cook our food. Total b.s. and a lame excuse. I would NOT go back and would NOT recommend this restaurant to anyone.

Hi, I am looking for a place that sells nopal? Do you know where I can buy in Singapore?