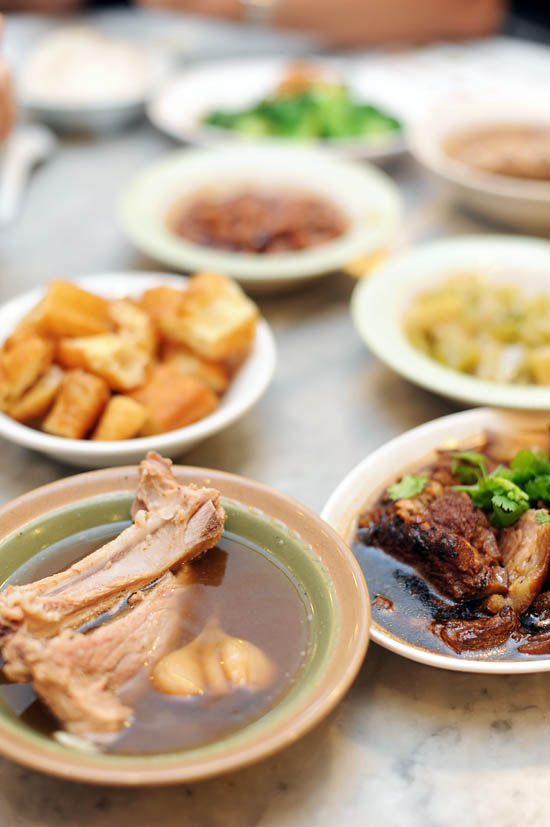 We are really spoilt for choices when it comes to food in Singapore. Other than having brunch, kaya toast or dim sum with the family, there are also many people who enjoy having Bak Kut Teh (a must-try Singapore food) on a weekend morning.

I was actually crazy enough to go there early in the morning just for Bak Kut Teh. Given that they are located at Rangoon road and my place is nowhere nearby, I think it was a great achievement that I was able to wake up to have Bak Kut Teh at 9am.

This was just the first stop of our best-of-Singapore-food-tour that day, and it was obvious from the picture that we over-ordered. 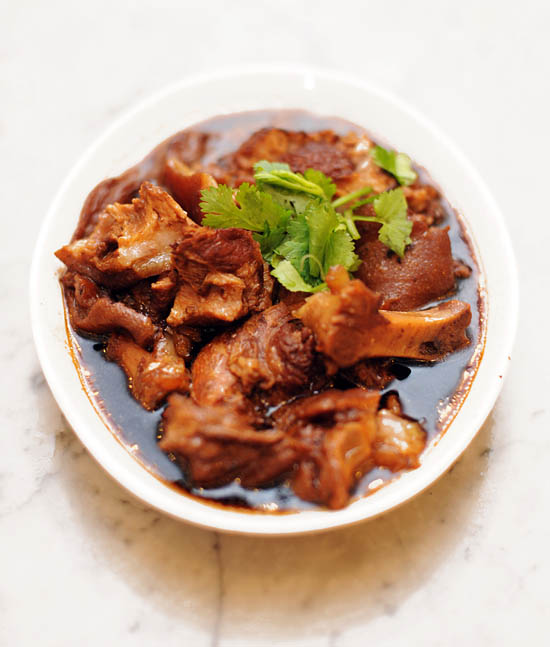 Between the five of us, we had a bowl of Bak Ku Teh each, and shared the preserved vegetables ($2), fried youtiao ($2), green vegetables caixin ($4), braised peanuts ($2), and braised pork trotters ($8). If you are a big fan of pig internal organs, Ng Ah Sio also has pig liver, pig kidney, pig intestine, pig tail, and pig skin on the menu.

When it comes to the main character of the show, they have both the pork ribs ($5.50) and spare ribs soup ($7.50). I think it really boils down to personal preference, but I like to go for spare ribs as they have a bit of fat which can make the meat more tender than the pork ribs. Ng Ah Sio at Rangoon road is definitely one of the most popular Bak Kut Teh places in Singapore. Whilst the pork ribs in the strong peppery soup base were tasty, I am not sure if I will wake up and go all the way to Rangoon road just for Bak Kut Teh. The Pork Trotter was also not too bad, but it paled in comparison to the one that I had at Founder Bak Kut Teh.

Both Ng Ah Sio Pork Ribs Eating House and Founder Rou Gu Cha Restaurant have different supporters, the former only operates for breakfast till 2pm in the afternoon while the latter opens till late night 3am for supper.

Ng Ah Sio is the Bak Kut Teh restaurant that refused to serve Donald Tsang after their operating hours, so come early if you want to satisfy your Bak Kut Teh craving.

Which is your favourite place to have Bak Kut Teh on a weekend morning?

brad! i love this post especially! I’m a big fan of bah kut teh and The yahua bah kut teh at Isetan office is awesome haha

Hey, you should check out this kuaychap stall in Tampines called Toa Payoh Kuay Chap. Its at Blk 826 Tampines Kopi Point. Their chili sauce rocks btw

Dear Bak Kut Teh Lovers,
Do go to the ‘Yong Bak Kut Teh’ with Original dark clear soup @ 906P Upper Thomas Road (Along/Next to HANS) Their from the same Master
but ‘Yong kept the dark soup base’ which you can hardly find these days. I love their Kidney’s soup base and the friendly serving

Must try and enjoy folk!!!

Omg! Ng Ah Sio definitely rocks! Used to frequent it all the time because I love the hot peppery soup! I didn’t use to fancy the herbal soup type of Bak Kut Teh, but recently a friend introduced me to Yuan Bak Kut Teh at Blk 177 Toa Payoh central and I am now a convert! The soup is to die for! And the braised pork is also amazing! Give it a try and tell me what you think!