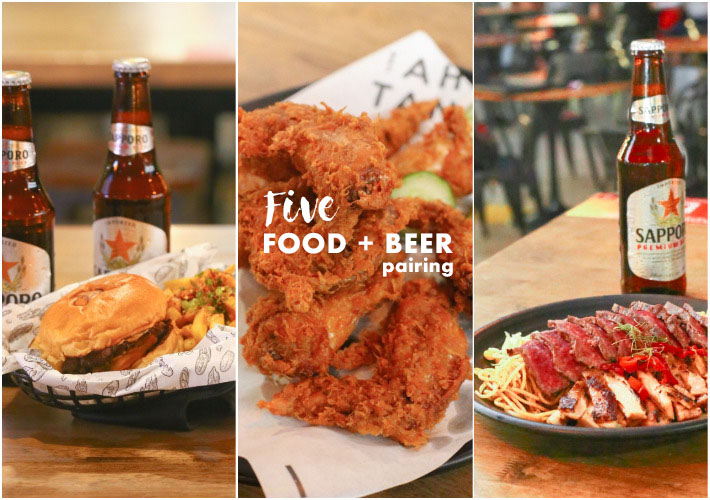 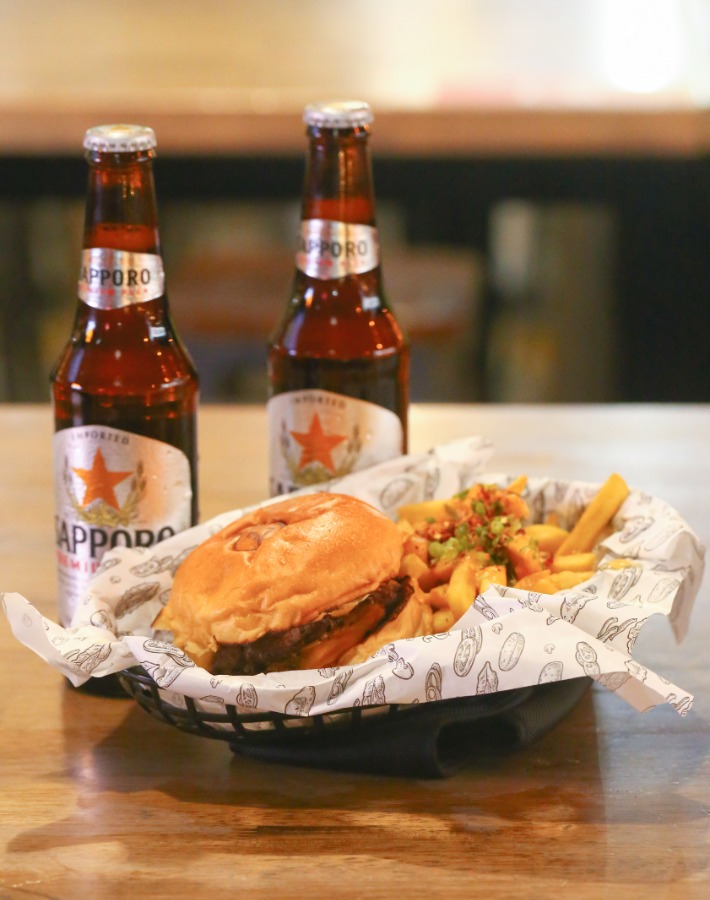 Beer goes well with anything, especially burgers. You are not a true beer connoisseur if you have not tried beer together with burger — those two go together like peanut butter on jelly! Imagine chomping on a succulent, sinful patty and having a smooth, earthy bottle of booze to complement the heavy-handed meal.

Introducing Burgs by Project Warung, this humble Halal burger stall serves up quality, gourmet wallet-friendly burgers for the masses. We opted for their Burg’s Classic Cheeseburger with a Double Patty and Cheese Fries (S$11.50) which consisted of a handcrafted beef patty, Burg’s own signature sauce, pickles, crispy fried shallots and American cheese. 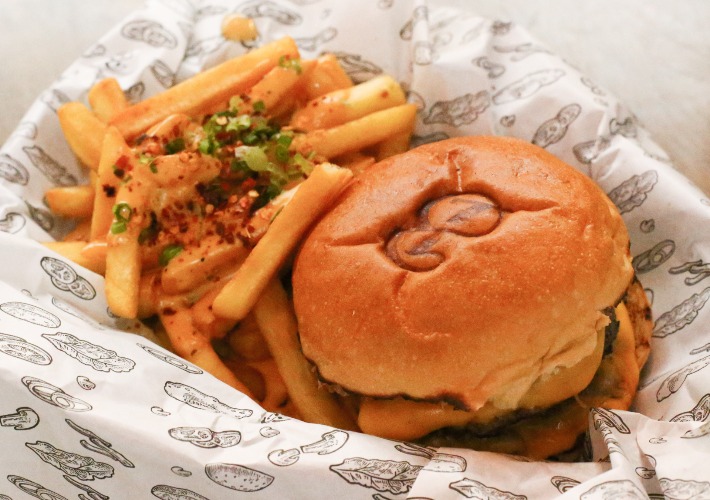 This dish was our favourite; it had a melted gooey cheese that simply enveloped the patty, while the meat itself was thick and luscious. Bite into it, and you get a whole mouthful chock full of fluffy buns and moreish meaty flavour. Sip on the beer, and you get an additional, strong pack of punch that elevates the taste of the burgers and cuts through its fattiness!

The fries were all generously coated with a huge goop of cheese as well; the fries used are not your usual shoestring ones, which gives the sinful meal an extra bit of indulgence. We enjoyed chomping into it: the fries were full of soft, potato goodness. 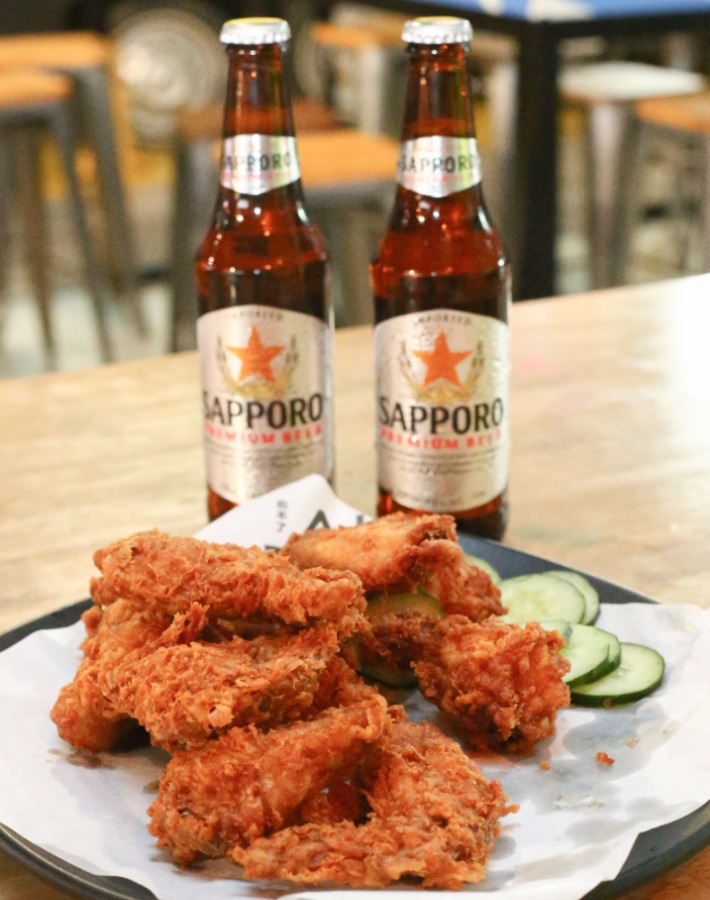 We are all in universal agreement that when it comes to beer, it is best quenched with greasy fried food. Indulge in a night packed with rich-flavoured booze, and even chicken wings, that leave you licking your fingers for more! Featuring the iconic Har Cheong Gai Wings from Ah Tan Wings — every chicken lover would have heard of this legendary dish. 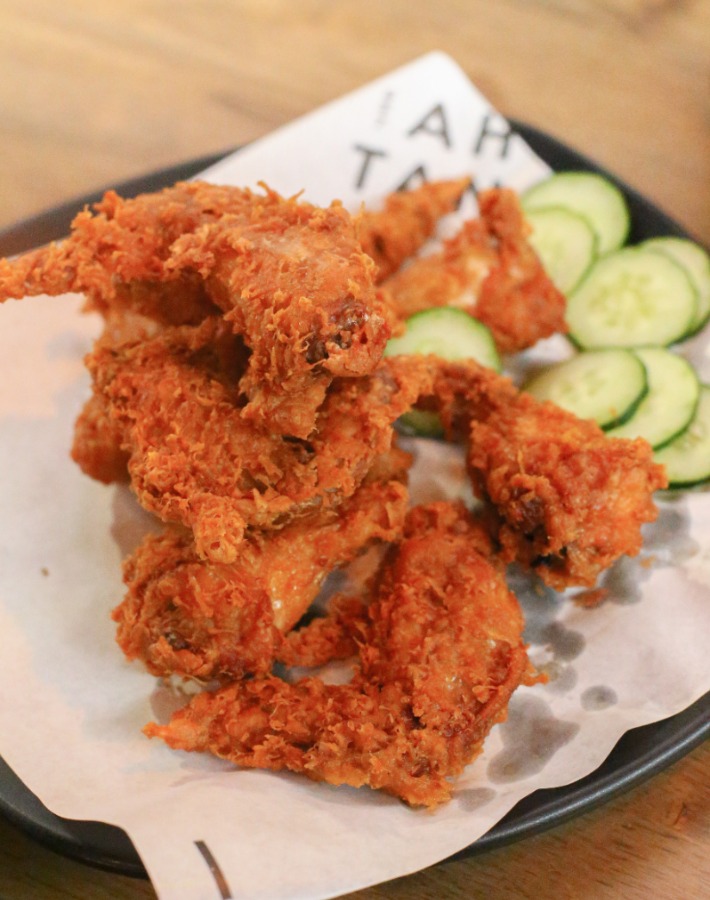 Fried to perfection, the wings boasted a crisp skin well-coated with fragrant prawn paste. It had tender, juicy meat that had a lingering salty-sour aftertaste, adding on to the wings’ savouriness.

Wash the greasiness down with your Sapporo Premium Beer, and you will definitely be hooked on that addictive pairing: when it comes to munching on heavy flavoured dishes, the malt in the clean, crisp alcohol will balance it out. 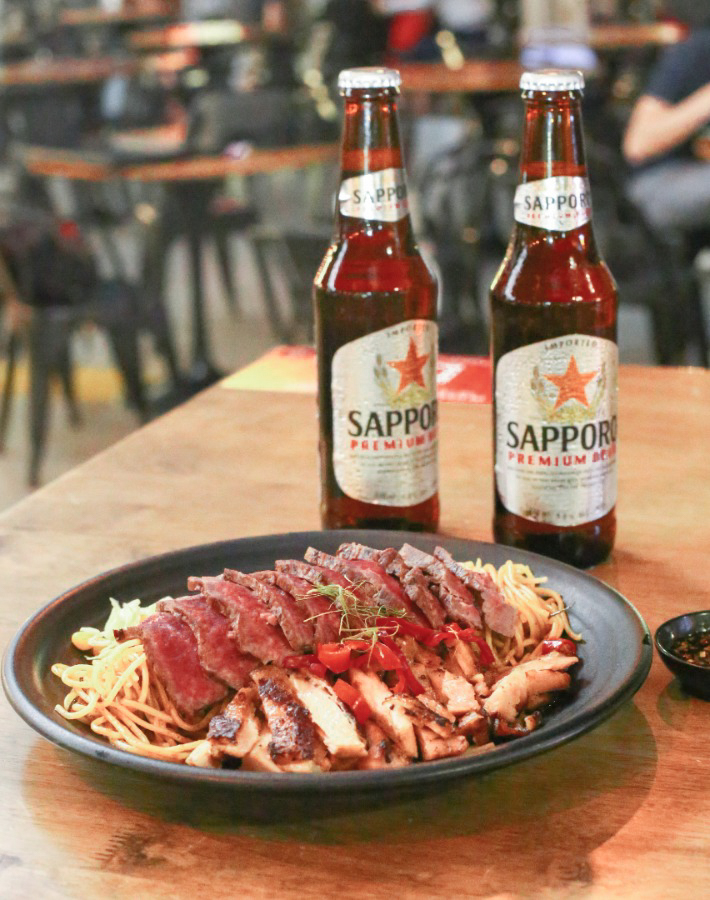 For those who want to fill their growling tummies with something much more substantial, definitely check out Thai Grilled Project. Going for the quick-service Thai food concept, the tiny stall doles out traditional Thai recipes with a unique twist: think Thai-Western fusion food!

Aiming to serve up only elevated, contrasting flavours in their dishes, this is the best stall to patronise if you are looking for something a little different, flavourful and unique to go with your Sapporo Premium beer. We went for their Tom Yum Pasta with Grilled Chicken and Grilled Sirloin Steak (S$11.90). The pasta was al dente and ladled with thick tom yum sauce, naturally lending the noodles its sweet tanginess. It was also mildly spicy, and the coolness from the beer only enhanced the dish’s spiciness, leaving us hankering for more.

You can also choose to add on the Grilled Sirloin Steak slices, which we did! It had a medium-rare middle, oozing umami-filled flavour. The chicken pieces also had a slightly charred skin, which gave the chicken an extra oomph of smokiness. The savouriness from the meats also cut through the sweetness from the pasta, making it a well-balanced meal. 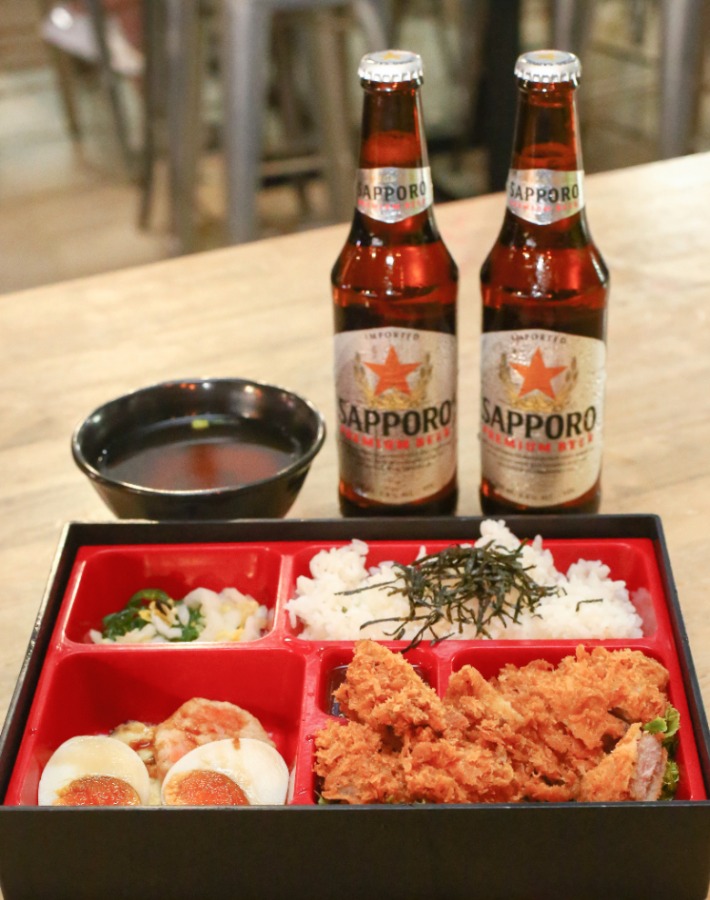 Yet another filling, substantial dish is this Tonkatsu Bento (S$12.80) — this particular bento set is a full-fledged meal that comes with a tonkatsu cutlet, Japanese rice, eggs, fried tempuras, pickles and chuka wakame. 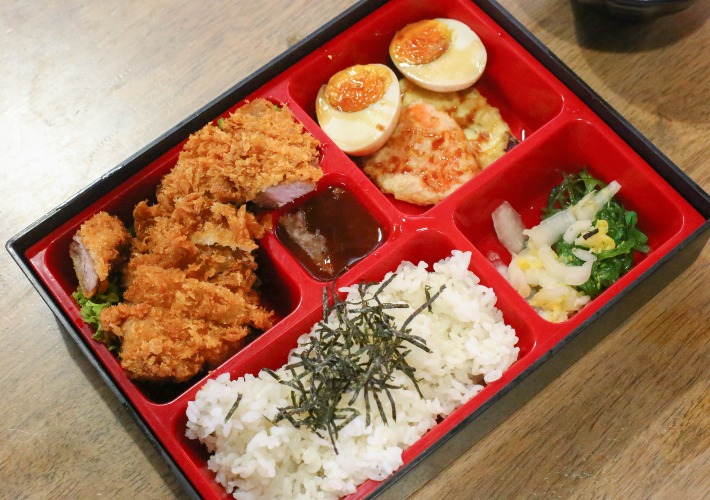 The tonkatsu cutlet was well-fried and was not greasy; it also had a light, yet chunky netted breaded batter that covered soft, tenderised pork meat. The tempura was fried to a golden-brown perfection as well and had a balanced skin to meat ratio. Needless to say, the tonkatsu cutlet goes really well with the Sapporo Premium Beer. 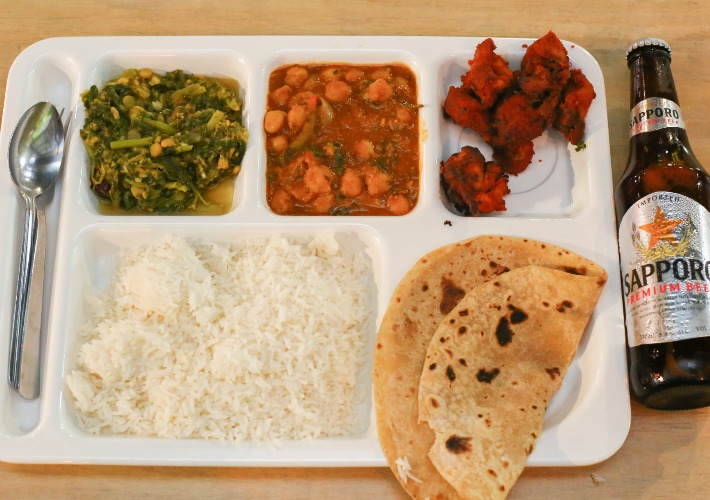 Get a taste of something a little traditional as you tuck into Pepper Castle’s Naan Set (S$8) from Pepper Castle which featured a huge platter of Tandoori Chicken, Naan and rice.

The polished pearls of rice were exceptionally fragrant, while the chicken was melt-in-your-mouth tender. It also had a slightly charred skin that added crispiness to the meat. Combined together, the flavours and spices were definitely on the stronger side, but the malt and earthiness from the Sapporo Premium Beer cut through the spices, offering a mild taste profile.