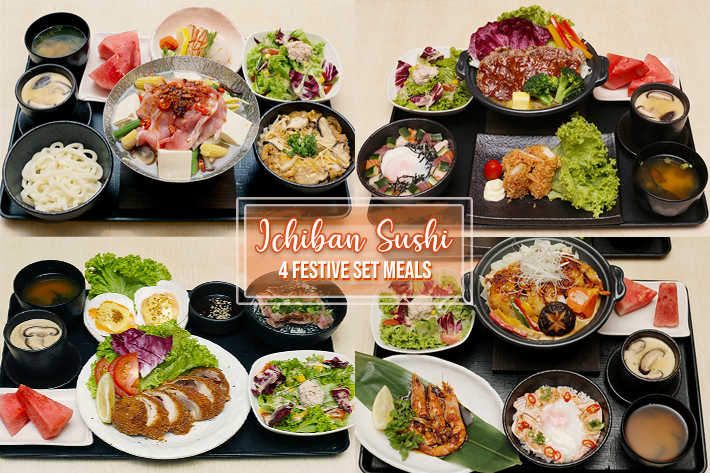 It is that time of the year again; with the festive season just around the corner, we are undoubtedly reminded of decadent holiday treats and majestic wintertime roasts. Although many associate the holidays with the typical Western spread, not every meal needs to be an elaborate and extravagant affair of turkey, ham, and a copious amount of cranberry sauce. This festive season, why not treat your family to a casual yet delightful Japanese repast at Ichiban Sushi?

More than just a convenient option, Ichiban Sushi is a welcoming space perfect for families to spend some quality time together over the holidays. Instead of needing to splurge on lavish meals to be able to enjoy Japanese cuisine, the brand prides itself in offering an accessible alternative without skimping on standards.

Offering four value-for-money set meals, expect to indulge in a sumptuous meal that will leave you hankering for more. Each set is accompanied by a myriad of dishes, such as a main, rice bowl, chawanmushi and sides. They will be available from 12 November 2019 till 9 February 2020!

To add on something special, Ichiban Sushi is partnering Citi to offer diners a S$10 return voucher on every festive set ordered and paid with a Citi Card. 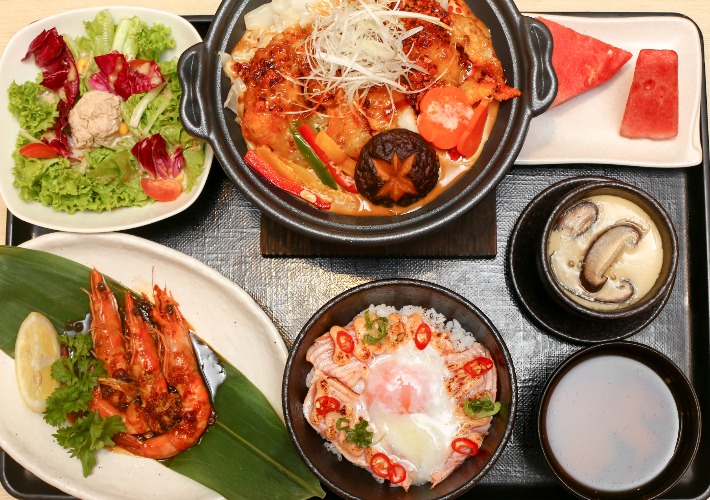 The glorious Spicy Shiromi Seafood hotpot is definitely the highlight of the set. Chock full of huge cream dory fish pieces and a medley of vegetables and mushrooms, the dish is served in a spicy, thick broth that is both fiery yet tangy. The soup base was aromatic and fragrant from the strong garlic notes, while the different capsicums added a hint of sweetness. In line with the set’s seafood theme, Ichiban Sushi has included a seared salmon sashimi don, topped with spicy cod roe mayo and a poached egg atop a fluffy bed of sushi rice.

The sashimi was lightly seared to give it an aromatic char and crisp that added to its savouriness. Garnished with chopped chillis and coated with spicy cod roe mayo, both elements lent the dish a mild, tangy spice, making the rice bowl all the more delectable. 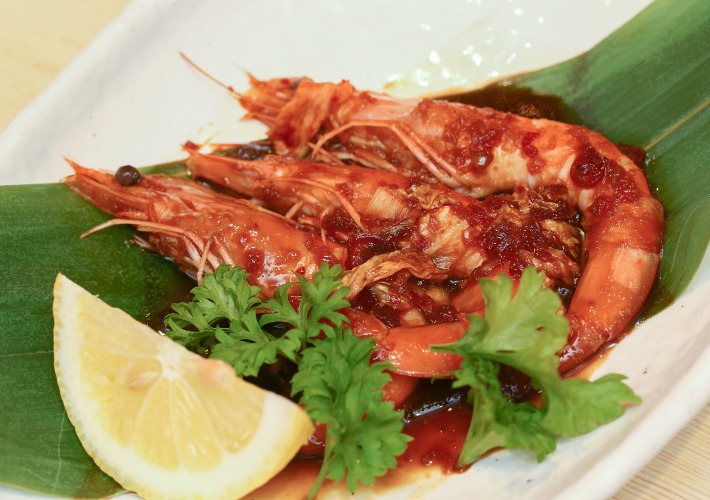 Though seemingly unassuming, the thick prawns are full of sweet flavour, which is further enhanced by the sweetness of the kimchi dressing.

While distinctly different in taste profiles, the kimchi flavouring is not too far removed from the peppery base of the teriyaki sauce. More importantly, it supplements the succulent freshness of the prawns versus being the highlight of the dish. Introducing their premium Kimchi Beef Steak Wazen (S$23.90) — this delectable set comes in yet another hotpot stew comprising a myriad of colourful vegetables and prime steak. Accompanying it is a platter of Breaded Crab Sticks, Bara Chirashi-Don as well as the usual sides. 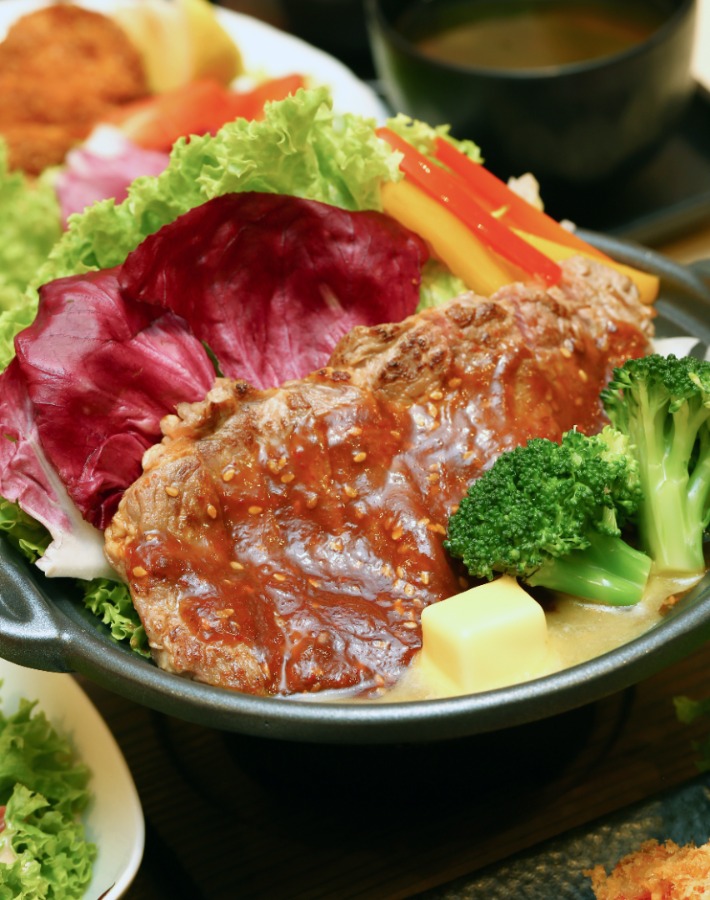 There is a good reason as to why Ichiban Sushi is confident enough in labelling the kimchi sauce as a house-special here. Unlike the subtle sprinkling of spice on the prawns from the previous set, the gravy here holds within it a much more complex blend of flavours. To fully appreciate this dish, allow for the beef slices to marinate for a moment in the sauce until a light glaze forms for the best possible taste experience.

The kimchi presence here is but an enhancement to the beef; it brings forth the full-bodied tenderness of the protein against the tangy zest of the red pepper seasoning. The same goes for the bara chirashi number – the coldness of the dish cuts through the fiery zest of the beef, giving diners a temporary reprieve from any flavour saturation from the main protein.

As yummy as diced sashimi are on their own, their flavours are muted when compared to the myriad of tastes present in the other dishes. To prevent the rice bowl from fading into the background, the inclusion of the onsen egg adds a richness to the dish, and binds the distinct fish cubes into a cohesive whole. Tempuras are a staple to include in every traditional Japanese set meal! This time, expect a twist to your the shrimp tempuras, as you will be served breaded crab sticks instead. Well-battered with a flaky, crispy crust, the crab sticks break apart easily to reveal a soft, substantial filling of fish paste. 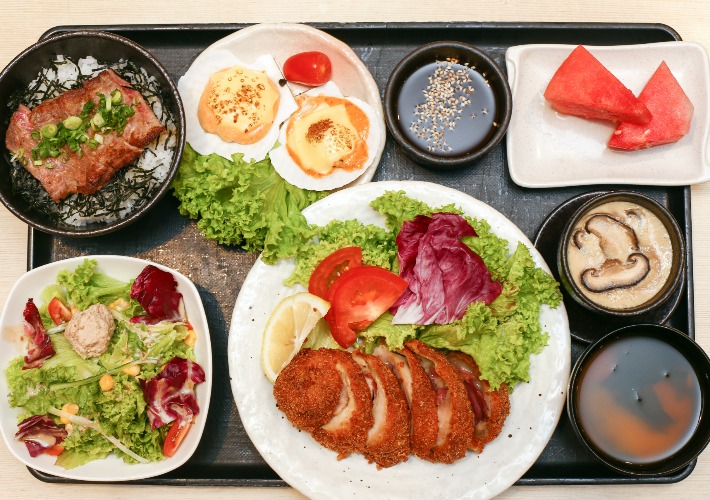 Get the best of both worlds with their Cheesy Chicken Roll Wazen (S$22.90) — what more can you ask for with their finger-licking sides of seafood, beef and chicken dishes?

This set is surely our personal favourite; we got to taste one of their festive oceanic gems such as the Grilled Scallop with Spicy Sauce & Cheese, as well as feast on the toothsome Yakiniku Beef Steak Rice Bowl and Bacon and Cheese-Stuffed Rolled Chicken! 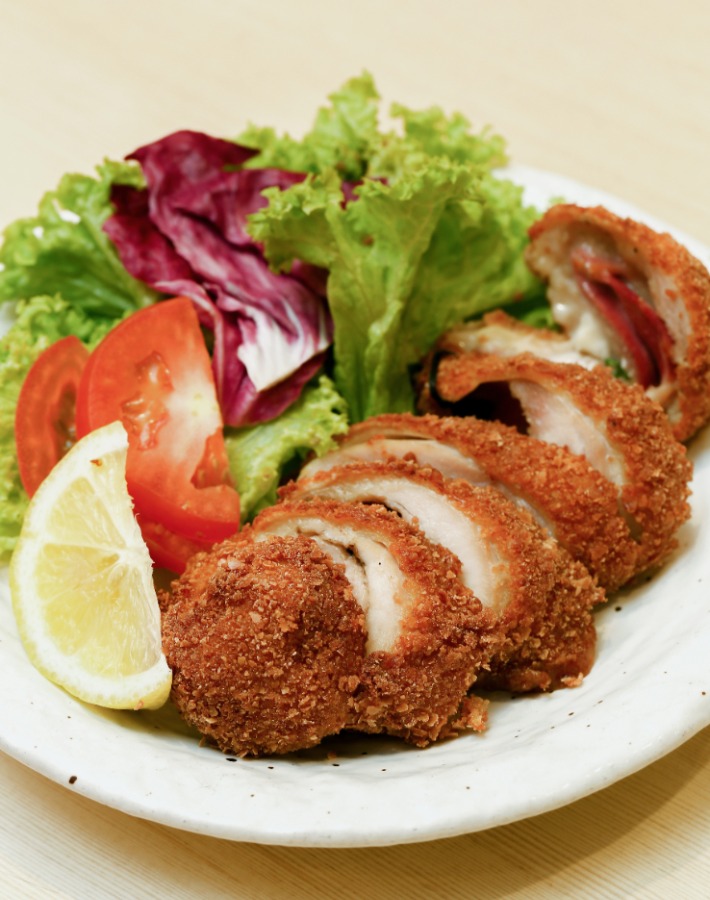 Similar to a tori katsu, the chicken roll is nicely fried to golden-brown perfection, resulting in a crispy skin that is not overly greasy. It also had a nice skin to meat ratio – the thin layer of fat beneath the skin oozes juicy, savoury flavour, while the meat is tenderised and luscious.

All the chicken cuts also encase a gooey, cheesy middle and small bacon strips that simply melts in your mouth. Remember to coat the chicken with their recommended Tonkotsu Dipping Sauce. 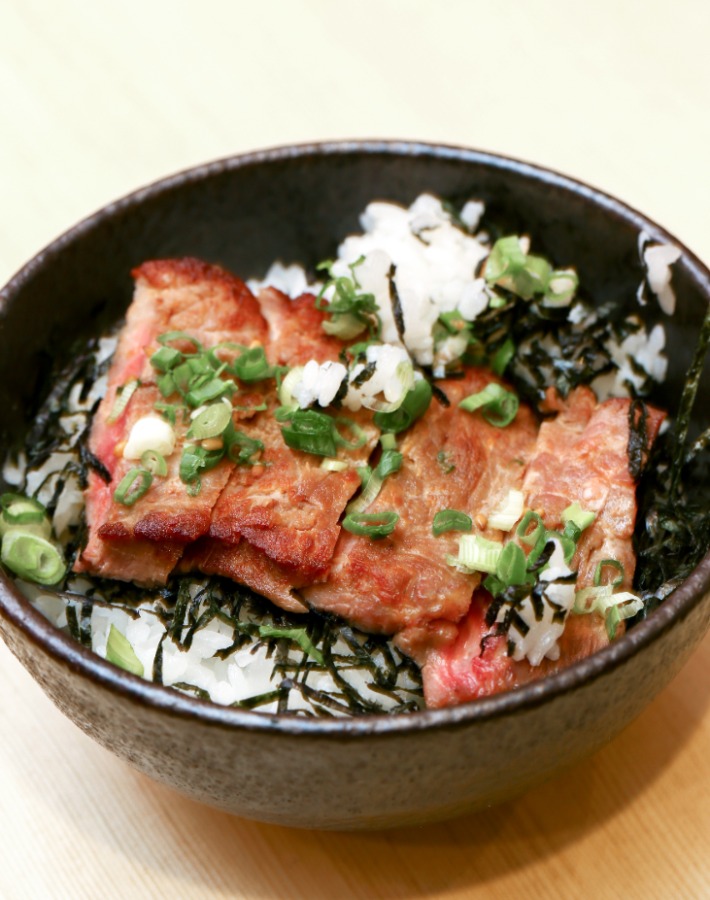 Instead of drowning the beef in heavy sauces, the juices from the beef slices naturally accentuate the aroma of the rice base, making this simple dish a more subtle, but no less appetising end to an otherwise playful meal set. 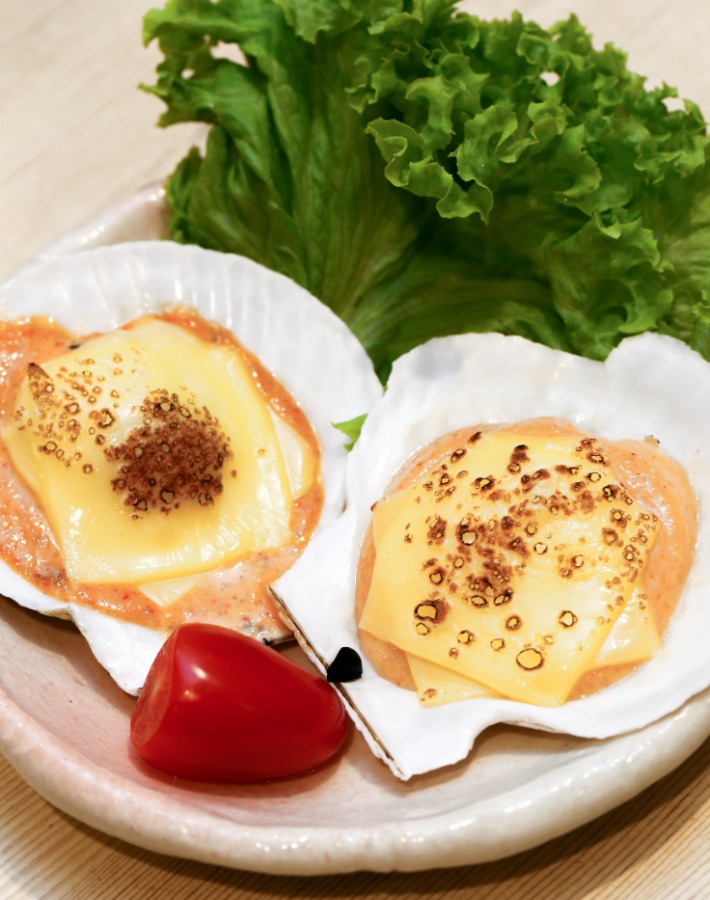 The Grilled Scallop with Spicy Sauce & Cheese comes with a spicy dressing which is reminiscent of mentaiko sauce. The cheese is also lightly torched, adding a subtle, mouthwatering char. 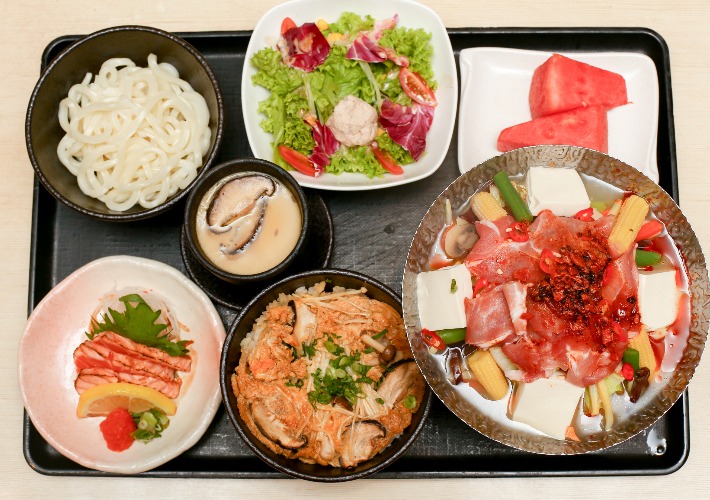 Truly boasting a grand aesthetic is the Hot and Sour Pork Nabe Wazen (S$22.90). This set is bound to leave you gobsmacked with its huge portions, fully-cooked sides and hearty rice bowl. Stealing the spotlight is none other than their Hot and Sour Pork Hotpot!

It comes with a multitude of ingredients including pork slices, mushrooms, tofu and corns. Topped with chilli slices, it adds an extra piquancy to the already sweet and sour broth.

The perfect accompaniment to the hotpot is none other than their udon. Served in a small portion, this tiny bowl of noodles is meant to be poured into the broth while you slowly slurp it up. Slowly let the chewy noodles simmer in the hot and sour base while it absorbs the spicy, tangy soup. 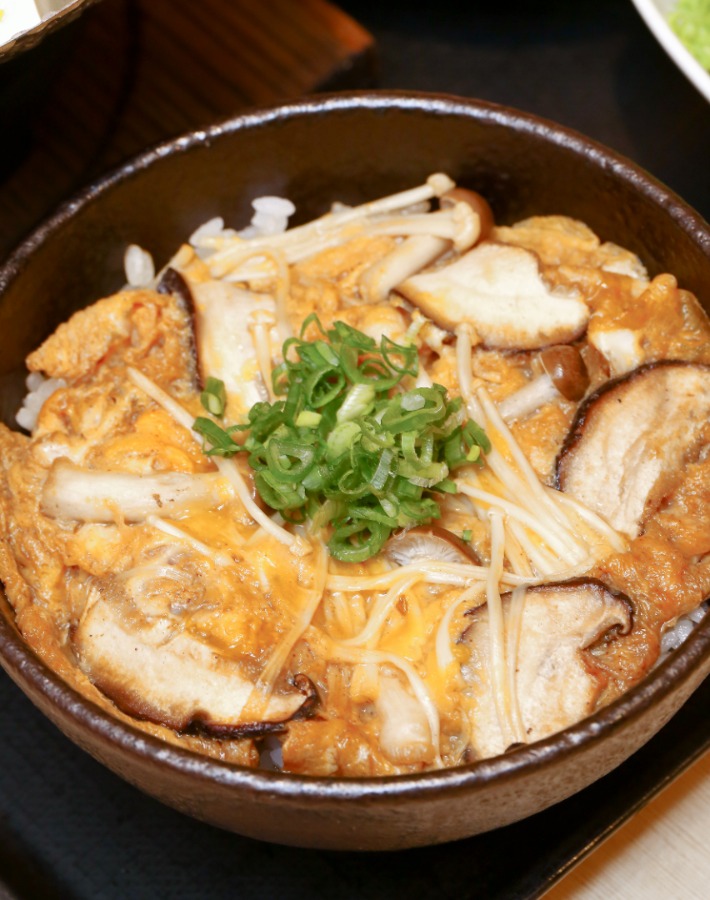 This is Ichiban Sushi’s Assorted Mushrooms with Scrambled Egg Mini Sushi Rice Bowl! Appearance-wise, it looks like an “Oyako Don”, except it consists of only mushrooms and eggs served with premium Hitomebore Rice.

We loved how there were two different types of shrooms, such as the shitake and enoki mushrooms, which gave the dish textural contrast to the soft rice and egg base. 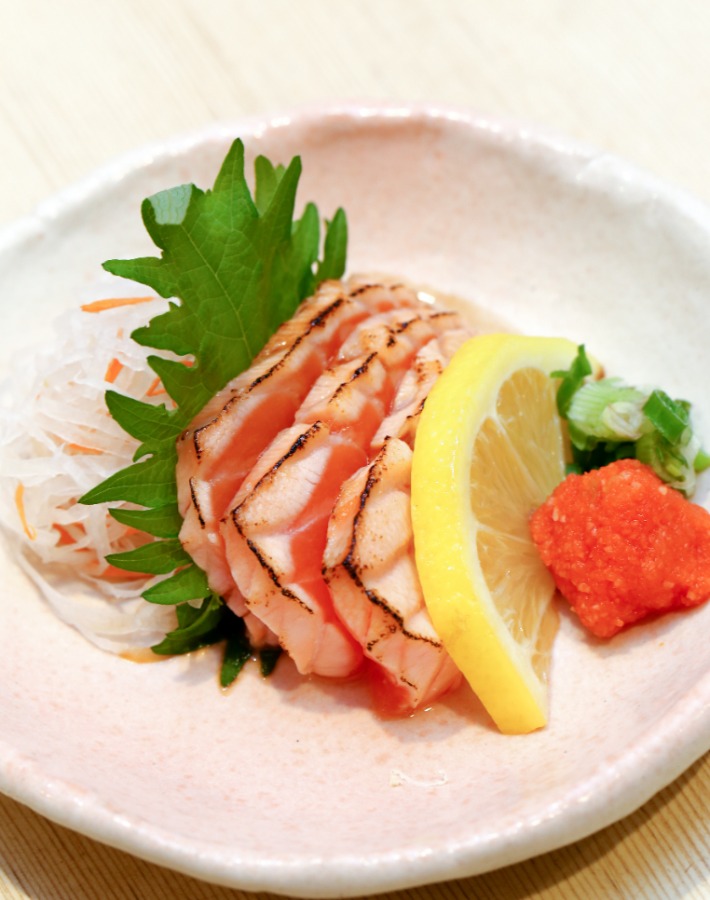 This set includes a Seared Salmon with Tataki Sauce platter. Following this set’s fully-cooked theme, it is lightly seared to bring out the aromatic flavours and fattiness of the flesh. The flesh was succulent and thick, while the seared exterior brought out the umami in the salmon. 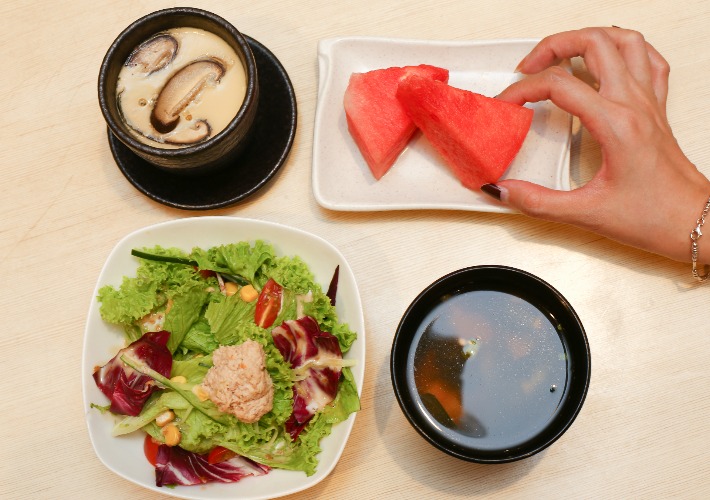 Wazen is incomplete without a variety of sides! Take a break from their heavy mains and tuck into their staple sides, which comes in tiny portions perfect to cleanse your palate with. Included in each set is a small platter of fruits, chawanmushi and tuna salad. Savour their earthy miso soup as well, which also comes in all sets with the exception of the Hot and Sour Pork Nabe Wazen.

Do note that the fruits given each day will vary. 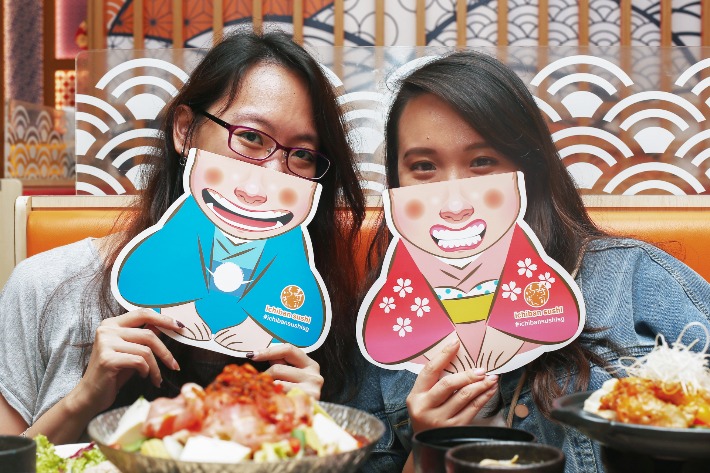 No festive season is complete without an exchange of gifts. Ichiban Sushi, in collaboration with Citi, is bringing two great holiday treats to all its diners. Between 12 November 2019 until 9 February 2020, customers who pay using a Citi Card will receive a S$10 return voucher with every Festive Set purchased while stocks last.

You can also stand to win S$30 worth of dining vouchers here at Ichiban Sushi every week by simply following their social media at @ichibansushi.sg, snapping a picture with their quirky menu and hashtagging them at #ichibansushisg.

This post was brought to you by Ichiban Sushi Singapore.