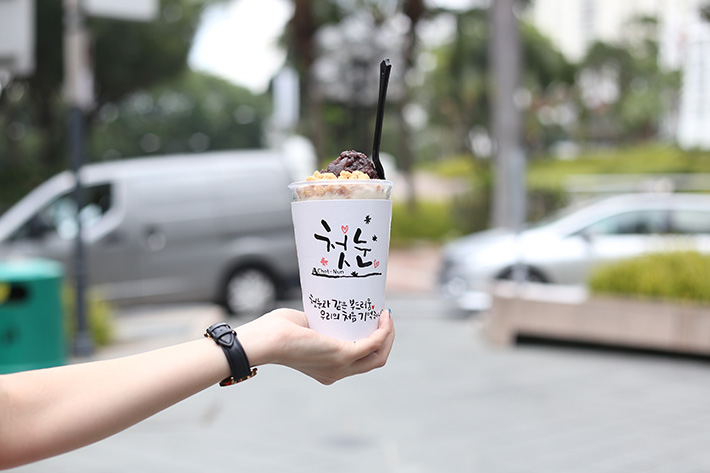 A new Korean wave to hit Singapore is Korean Bingsu in takeaway cups. Chot-Nun at Far East Plaza, is less than a month old and is the first in Singapore to introduce this concept.

We have been waiting for someone to take the plunge and serve Bingsu in Llaollao sized cups that are handy to eat anywhere. This simple but brilliant idea also serves as an economical alternative to its otherwise pretty pricey older brother, which tends to cost around the S$20 mark for a bowl.

We made a trip down to Far East Plaza to check it out, and here’s what to expect from Chot-Nun.

Chot-Nun offers a variety of flavours – some regular and some more unconventional. The takeaway cups see a base of shaved milk ice, a layer in the middle that varies, and a mountain of toppings on top.

What is interesting about this cup, is also the fact that it is placed in another cup of dry ice before serving. Whether this feature is gimmicky or not is up to you, but for us, a 3-second entertainment of dry ice is just redundant. 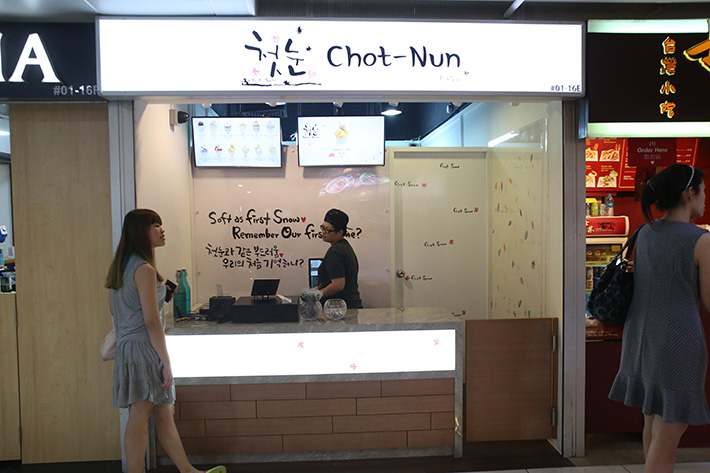 Some classic flavours are Injeolmi Cup (S$7.50), Strawberry Cup (S$9.50) and Pat Cup (S$6.50). We went for the latter, inspired by the original Patbingsu. While the milk snow or shave iced base lacked in wow-factor, the red bean and mochi toppings were not that bad. However, the cup in general is a tad bit on the dry side and pretty lacklustre in terms of overall flavour.

Chot-Nun is opened up by a local and is a brand on its own, using very strong Korean influences. In general, it is not the worst bingsu we’ve had, but it still lacks the star quality to stand out in the competitive Singapore F&B scene.

That said, if this Bingsu to-go concept works and Chot-Nun gets more and more popular, we foresee more outlets and “copies” opening islandwide very soon.

Hi.. Read your article and you mentioned this is the first takeaway concept for Bingsu in Singapore. In fact it’s not.. Several Bingsu places and cafes already have this concept quite long ago, so you may want to do some research on this….

I tot Jinjja chicken offers bingsu which can be easy to take-away and eat at the same time too….

Just ordered a durian bingsu here. The dry ice effect is definitely redundant – lasted less than 30 secs and if it added to the price, I would much rather no have it. Taste is mediocre. Bad customer service. The 2 girls sitting outside ignored me even though I stood at the counter at least a minute. Took my order only when when I asked if I could order. Chit-chatting the whole time, and served me without eye contact or thank you.