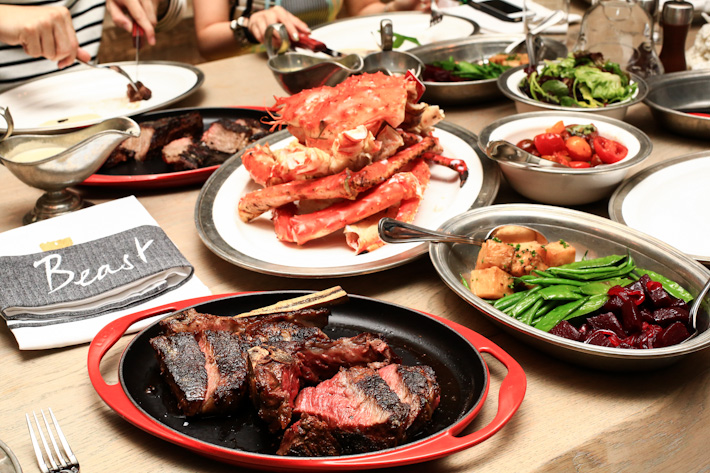 Not the most pleasant word in the dictionary, but a dinner at Beast King Crab & Steak Restaurant is surely one of the most memorable dinners we’ve had at London. Fans of the ever-popular Burger & Lobster would know that Beast Restaurant is the other brainchild of the same owner, and it is a five-month-old joint that is the talk of the town.

It is similar, yet very different. Beast Restaurant is a posh outlet in Marylebone, and it is a stunning underground restaurant for diners of the after-dark. Longitudinal log tables and seats fill the indoor sitting area, together with endless candles to light up the restaurant. It felt like we stepped right in to a scene from Phantom of The Opera – the regal British atmosphere is second to none. The open kitchen makes the place less intimidating and we had fun exchanging banters with the chefs. The team of wait staff stands all around the space, ever ready to serve.

Be seated, have a drink, and the staff will brief you about how Beast Restaurant works. There is no menu. At £75 per person, you are in for a feast that is fit for even the biggest beast. Like many other things in London that will shock you with its price tag, this dinner is an indulgence, one that only those with a raw love for premium steak and Norwegian red king crab will covet. If you are willing to splurge, Beast Restaurant will promise you a theatrical and gastronomical experience. 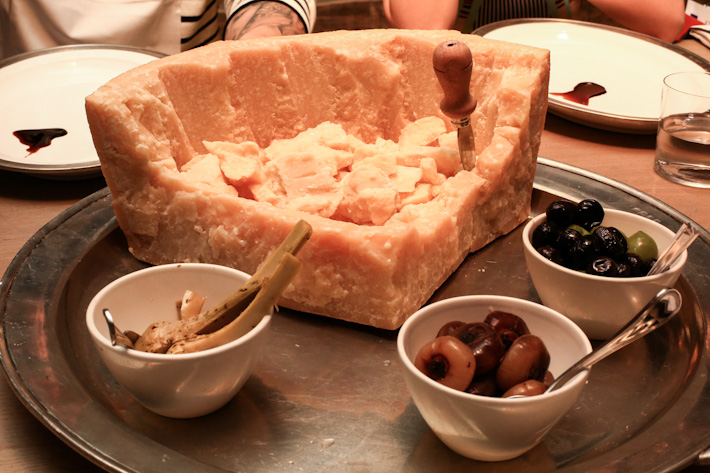 And the night began with an appetiser of cheese platter for us. Presented in a hacked cheese wheel, dig in to crumbly good cheese and savour them with the accompanying olives and artichoke.

The succeeding salads come in different variations – every one so fresh and tasty. Beetroot and roasted potatoes, French beans and plump tomatoes, each salad came in a lovely portion and the plates fast filled our table. Refills are available and free of charge, and if you love beetroot as much as we do, one serving is definitely not enough. But save some space for the stars of the show – Norwegian Red King Crab and Angus Beef. The sheer size of the crab was jaw-dropping for all of us at our table of four, and the slab of steak was so thick and perfectly medium rare – just the way we had wanted it. And we were to understand why the dinner was well worth the £75/pax we paid.

The king crab was the freshest we ever had, every leg so long with full chunks of sweet flesh. It was so good that we almost forgot that it came with condiments. We would suggest eating the crab on its own, but they taste marvellous too with the accompanying herb butter sauce and Thai sweet chili dip. 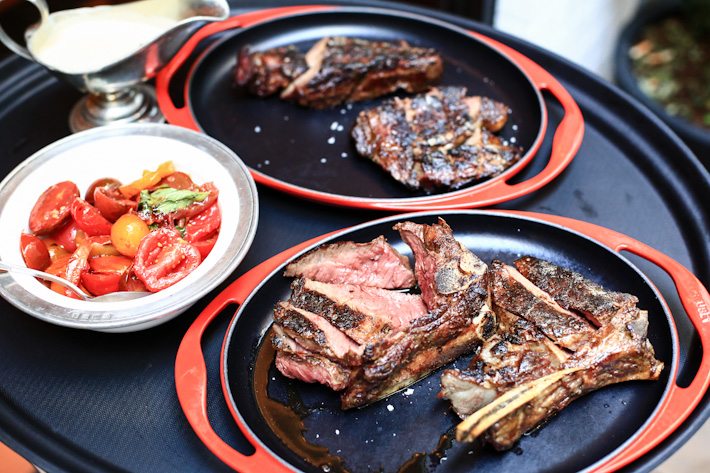 And we cannot get over how beastly the steak was! No pun intended. We spoke with the chefs and learned that each steak requires an average cooking time of 40 minutes – depending on the customer’s preferred doneness – and another 5 minutes of cooling down before it is served to pamper palates.

You get either a USDA Rib Eye or Striploin, or both if you have a group of four and more. The doneness can be done separately if not all diners have the same preference, but medium rare is the most ideal to fully enjoy the creaminess of the beef. 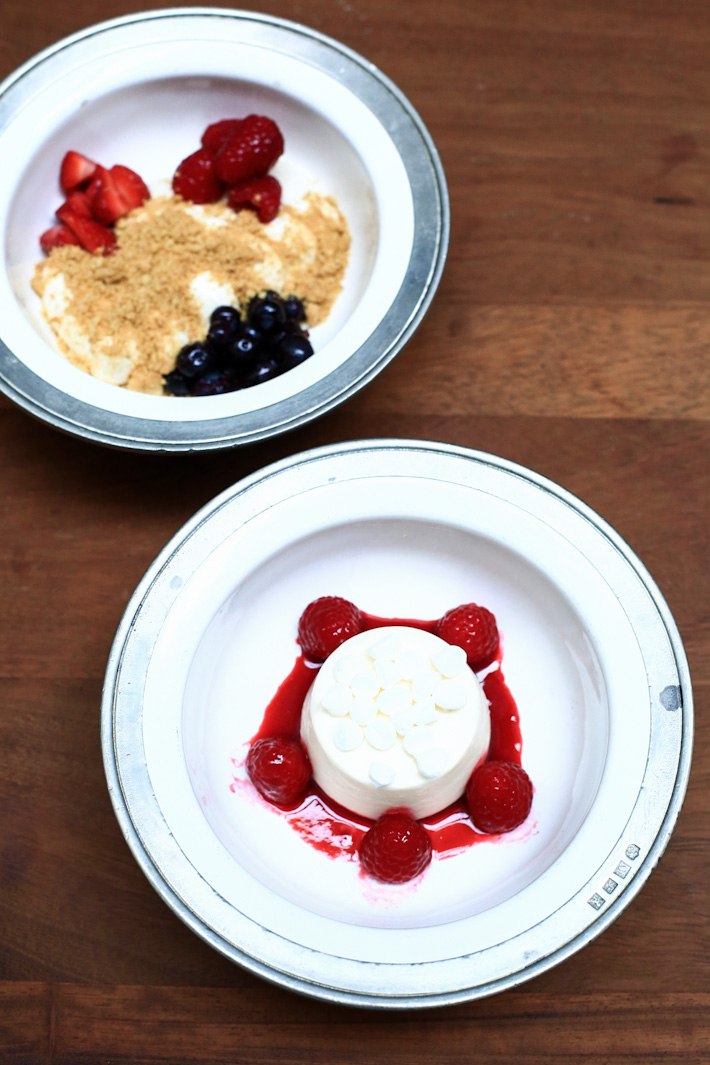 Think the show is over? Not really, because everyone needs some sugar for the soul. The daily desserts differ, but the mainstay – a very groundbreaking one – is the deconstructed cheesecake that we polished off despite the fact that we were already so bloated after our starters and mains. We were not told that desserts were to be served, but boy were we glad all the same. A very intricate creation, Beast Restaurant’s version of deconstructed cheesecake is presented like a work of art, and tasted better than it looked. Even our friend who is not usually a fan of sweets was wowed by it and couldn’t resist helping himself to more! 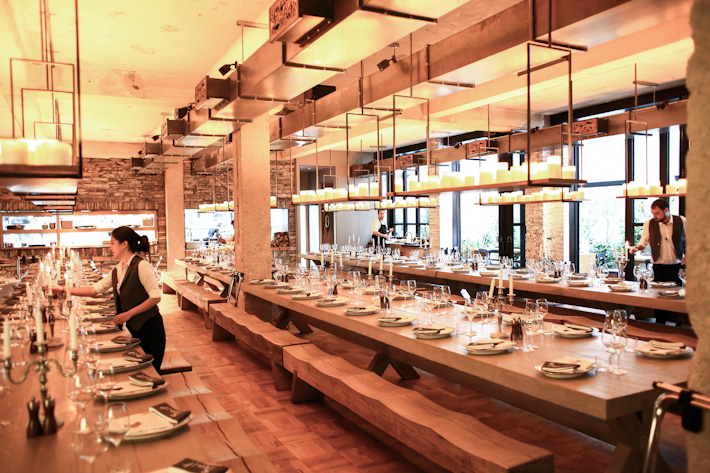 We went in starved, and left very stuffed. And very impressed with dinner. We love Beast Restaurant, as with Burger & Lobster. The owner is brilliant and he must feel so proud with two very successful concepts. The idea is to be so damn good at one thing, and leave people with no choice but to try it to complete their lives. And Beast Restaurant has done exactly just that.