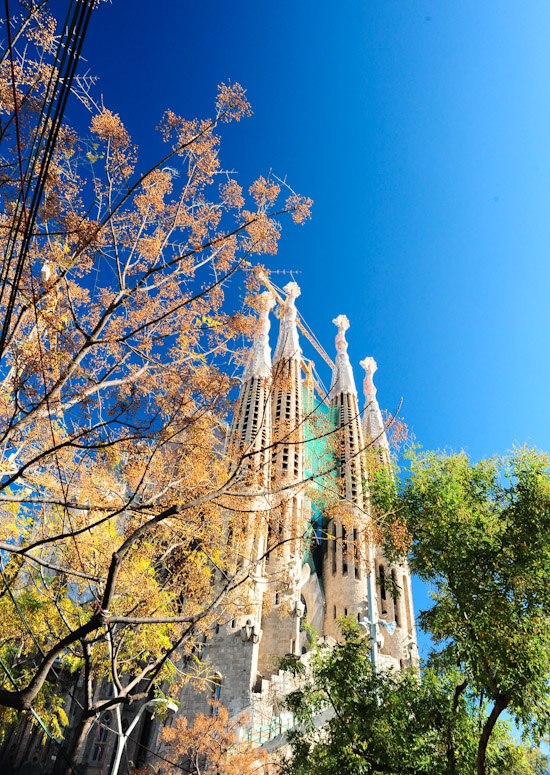 Barcelona is an amazing city. The weather is perfect, the locals are friendly, the shopping is great, and of course, I like the fact that people here love dining till late.

Whenever I go to a city that I really like, I always find myself envisioning a future staying there. After spending the first day in the capital of Catalonia, I told myself: “I could live in Barcelona!”

It has always been my dream to visit Spain, and eat Spanish tapas while bar-hopping. I managed to go to some of the eating spots that a few readers recommended when I mentioned on twitter that I was heading to Barcelona.

For the first two days, we mostly ate at the (touristy) restaurants along La Rambla as we were staying in the area at Hotel Espana. That’s so wrong. I know I know. But luckily for the next three days, we ate pretty well, and some of the tapas restaurants were spectacular. 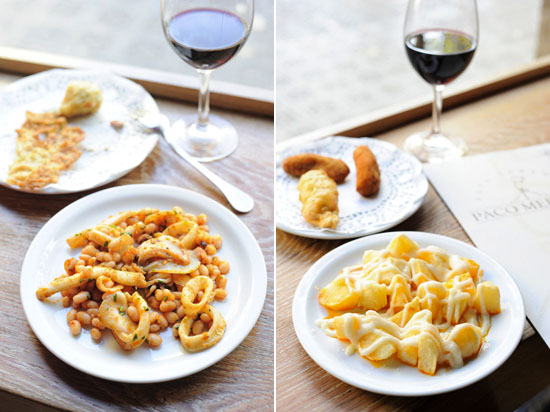 A local told us that Paco Meralgo (c/ Muntaner 171. 08036 Barcelona, Spain Tel: 93 430 90 27 Metro: Hospital Clinic) was a place worth trying, and after getting her assurance that it wasn’t a tourist trap, we managed to navigate our way there. 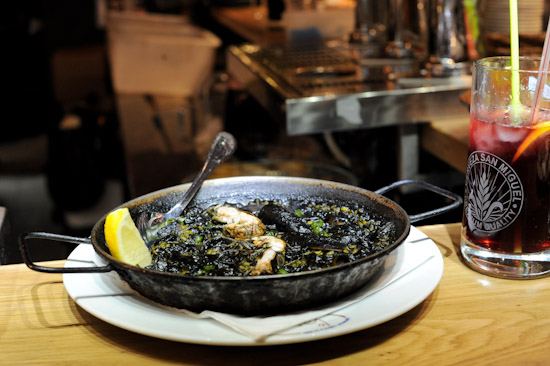 Throughout the trip, I’ve tried Paella from different restaurants, but sadly, I didn’t manage to find a good one. Or maybe it is because we were simply too used to the localised version of Paella that we have in Singapore. The hunt for the best Paella continues. Maybe a trip to Valencia (the home town of Paella) next year? In between meals, we went to the most famous tourist attraction in  Barcelona: Sagrada Familia – a large Roman Catholic church which is a UNESCO World Heritage Site, designed by Catalan architect Antoni Gaudi. 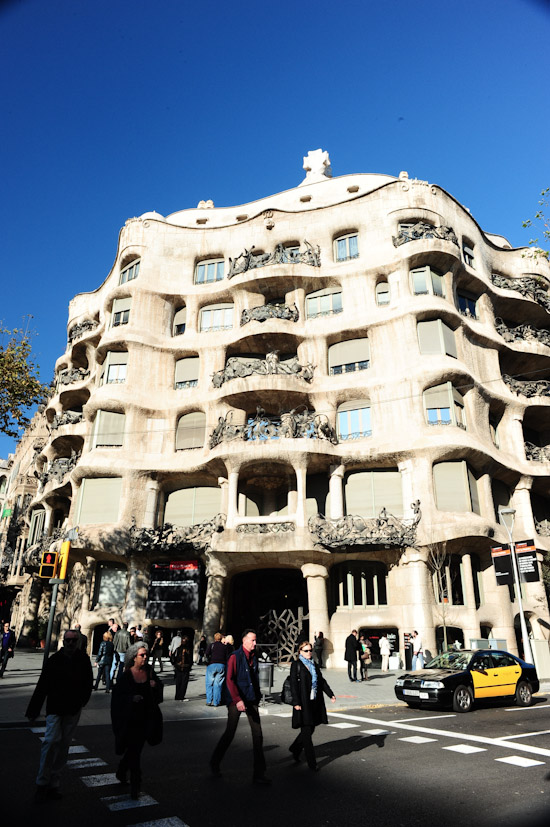 And the same thing happened here. 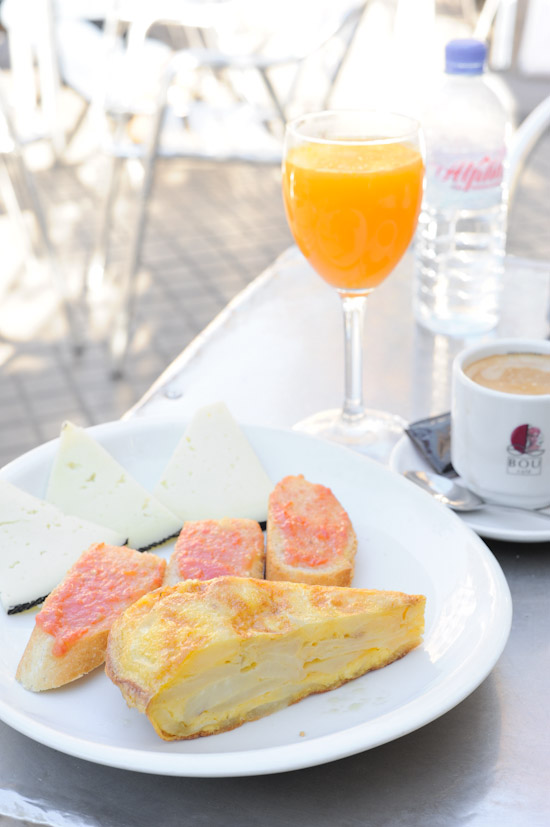 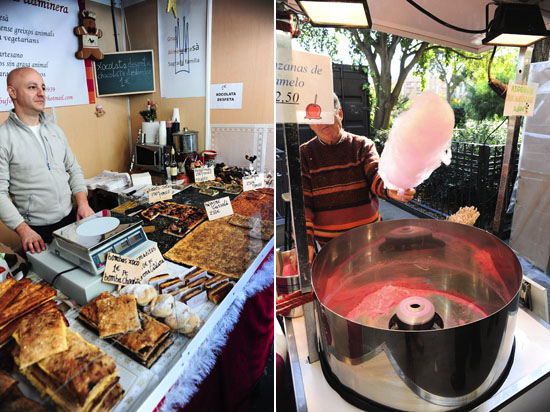 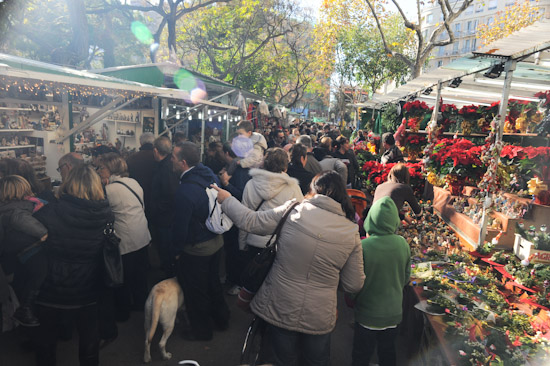 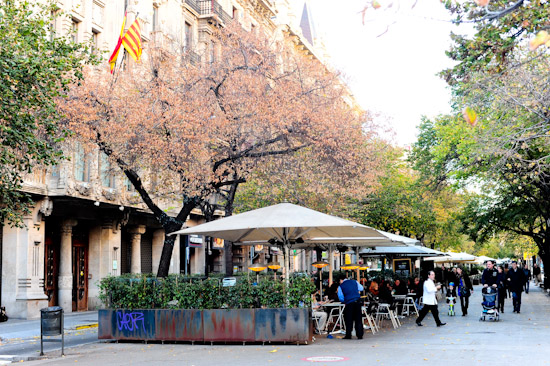 The menu is divided into several categories: Salad (€3-7), Flautas (€4-7), and Tapas (€4-10). A plate of Assorted Tapas (€15.65) came with prawns, clams, green pepper, fried small fishes, and potato croquette. In addition to the platter, we also had Baby Squids done in Andaluz style, which was excellent with beer. 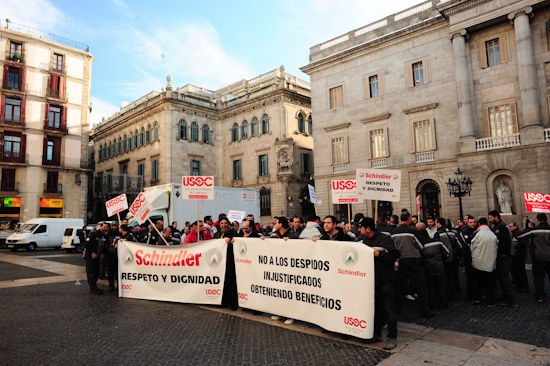 While wandering around, we walked right into a peaceful street protest. 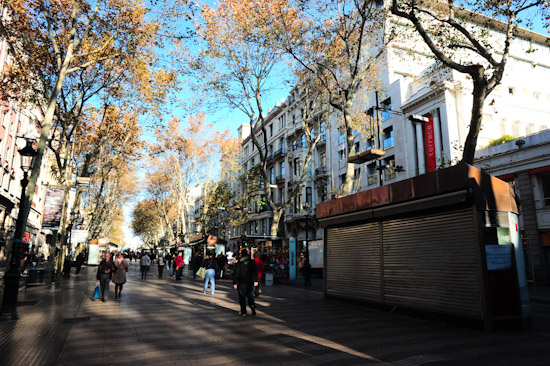 As I’ve mentioned, we stayed in La Rambla – a very popular tree-lined street in central Barcelona – and I really liked the area. (Other than the fact that it’s very touristy.) There were many adjoining streets, and it was really fun to walk randomly into one; it felt as though we were exploring a huge maze, and you never know where you’re going till you get there. 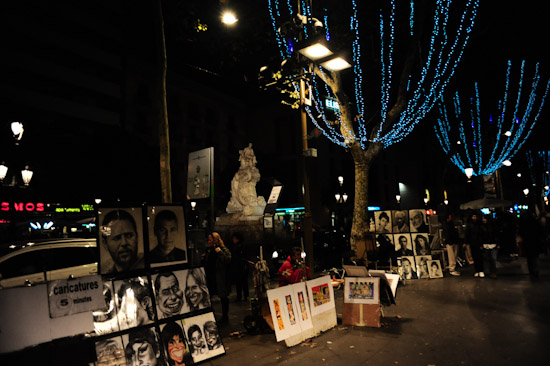 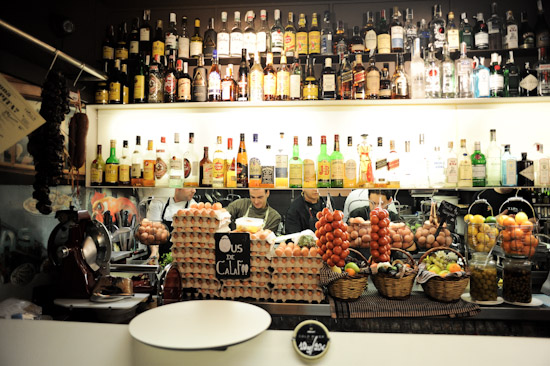 Just a stop away from La Rambla is Passeig de Gracia – a major avenue which is one of the main shopping district in Barcelona. Here, you can find the high-end designer boutiques and restaurants.

Tapas 24 (269 C/ Diputació, 08007 Barcelona, Spain Tel: 934 880 977 Metro: Passeig de Gràcia) was highly recommended and I immediately fell in love with the place when I stepped in. It was modern, unpretentious, and informal; just the kind of place that I’d open if I were ever crazy enough to set up a restaurant one day. 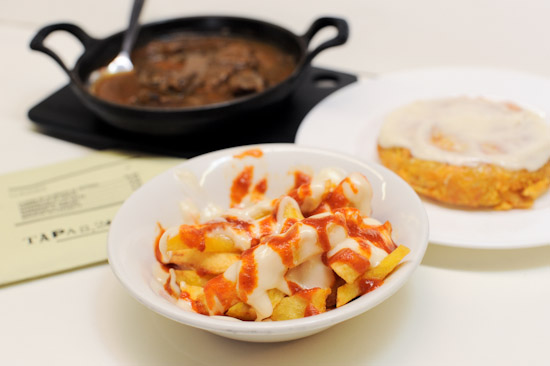 Unfortunately, the food that we had at Tapas 24 was not fantastic. Maybe the chefs had a bad day, maybe we had unreasonably high expectations, or maybe we just ordered the wrong dishes; the food wasn’t as good as I hoped it would be. That said, I can still see myself going back for a meal to try the other tapas when I’m in Barcelona next time. Spanish Tomato Bread – toasted bread rubbed with fresh garlic and ripe tomato, then drizzled with olive oil and a bit of salt – is something that’s eaten all over Spain. 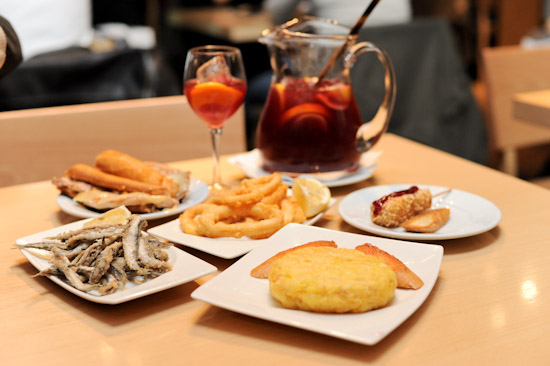 Among the tapas places that we went to, Cerveceria Catalana (236 C/ Mallorca, Barcelona Tel: 932 16 03 68 Metro: Passeig de Gràcia) stood out for serving good tapas at reasonable prices. It was the best meal that we had in Barcelona.

I’ll go so far as to say it’s a must-try restaurant in Barcelona. Reservations are required, if not be prepared to wait for at least half an hour. 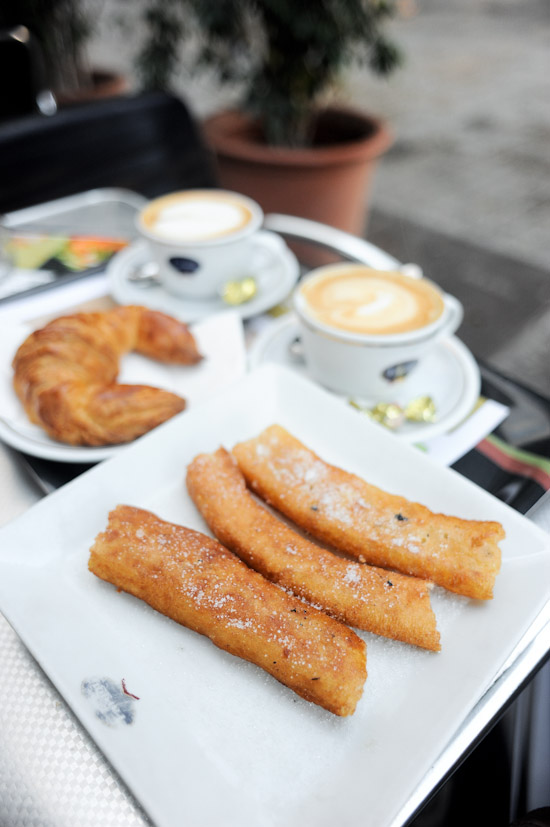 I was so goddamn happy in Barcelona; we were practically high on wine and sangria everyday, and needless to say, we ate a lot. After each meal, we would go shopping at places like Zara, H&M, Pull & Bear, Mango, and Stradivarius. And after digesting our previous meal, we would grab gelato and waffles by the roadside. Then we would continue to shop and make friends with our credit cards. 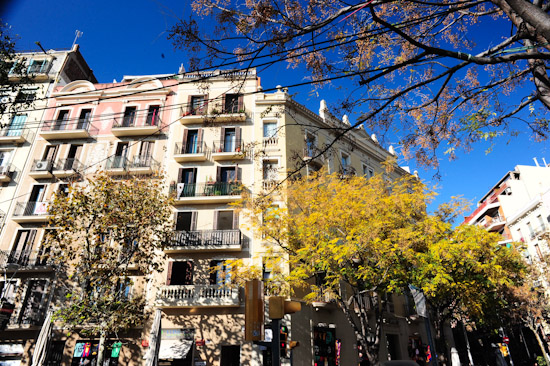 Getting to Barcelona: Singapore Airlines flies seven times weekly from Singapore to Barcelona. For other options, Qatar Airways and Emirates Airline often have promotions on flights to Europe.

Getting to city from airport: The main airport is about 17 km south-west of the Barcelona city centre (Plaça Catalunya). It takes about half an hour to go by bus A1 (from terminal 1), or A2 (from terminal 2). The price of round ticket is approximately €9. (I’d suggest taking the bus. Among the different cities I went to, Barcelona had the most convenient public transport from airport to city.)

Travelling Tips: Barcelona is known as the pickpocket capital of the world, so make sure to look after your belongings closely.

Where to stay: 4 star Hotels at La Rambla start at about €80 a night.

If you are craving for Spanish Food, read my guide to Spanish Restaurants in Singapore

Hi ladyironchef, I’ve been reading your blog for a while and haven’t gotten down to a comment yet, but I have to do so, cos I absolutely agree with everything here!
I just went to Barcelona a few months ago and I had the exact same feelings: I COULD LIVE IN BARCELONA!
The tapas was great, I loved the people and the shopping, the weather was perfect, I was dumbstruck when I came out of the metro and saw the Sagrada Familia.. I could go on!
I did get to try authentic paella in Valencia though (they’re definitely different from those in Singapore), hopefully you get a chance to do so some time! (:

@wren we need to book a ticket and go to Barcelona again! (:

Lovely photos reminding me of my vacation to Barcelona with 3 other friends!

i could live in Barcelona too after reading this post!

Let me know when you decide to!Haha

Hi ladyironchef, great pictures there! May I know which camera/lens you are using?

I love Barcelona as to why I’ve an apartment in Passeig Del Born and frequently leave the craziness of SG to head to my place. I do think you staying in Las Ramblas was a little touristy. A good vino y tapas place is near St Maria church (Born) is Taller de Tapas. Unlike SG, where long queue is a kiasu way, queues outside Taller de Tapas means it’s kick ass food. Try it next time.

I’d also recommend you to get lost in Barcelona. There are hidden bars and amazing chic restaurants, a secret that the locals won’t tell you, unless you get lost yourself. I’m no local in Spain (a sgporean) but having been in Barcelona and having a place there, I can tell you, there are loads of amazing places to explore.

We visited Barcelona while we were living in London. You can imagine the number of european cities we visited during the years… but my then 6 year-old will firmly tell everyone about his only favourite city, Barcelona!

Read your reviews on tapas bar hopping in Barcelona before heading there three weeks ago. And I must say your recommendation of Cerveceria Catalana was spot on, the food and atmosphere were both great. We were early, did not have to wait, and had an amazing meal!

May I know when was your travel period? I went in April and I didn’t get such good weather. It was raining almost every other day.

@celestine: Good to hear that you had a great time in Barcelona! Let me know if there are any places that I should try the next time I am there?

@Ally: hello I was in Barcelona in Dec last year, the weather was perfect. You should plan another trip for year-end!

And i will recommend you to try Tickets Bar (http://www.ticketsbar.es/). The food was unique and perfect. You should try.. Keep in mind, the reservation is needed.. I even reserved 2 months in advance.. but it worth it

thanks! I was just planning for it say Nov-Dec, but wasn’t sure if it would be too cold! But you just helped me decide. can’t wait to go back and try some of your recommendations!

Oops just saw that you replied

you can try Lolita Taperia the next round.. Beef with horseradish and chocolate with oil & salt were marvelous .. Drooling just thinking about it. Reservations not necessary but do go early even on weekdays as the crowd starts forming at around 7-730pm.

And there are a couple of stalls at Market Boqueira selling awesome tapas as well, Bar Central(baby squid ftw) and Pinoxto

Try them when you visit Barcelona again!

Hey, love your blog:)
I don’t think Barcelona is the pickpocket capital of the world. We just have to be careful like everywhere else.

Hi! I’ve been in Barcelona 3 weeks ago, was amazing trip with my family.

I was in Parc Güell, Hotel Me and 2 cool restaurants that I want to recommend you, Bimba’s and Divinus!

I was at Paco Meralgo, a really nice restaurant placed in Barcelona, in addition I was in Parc Güell and in Tenorio restaurant, I had a dinner with some friends there and we had a great time.

Hi! I was in 7 portes last year! it’s really cool, but I want to say that there are other restaurants in Barcelona that are so good like Bimbas or Cheri restaurant!

Oh Yes! Quinze Nits so good! and Gran Café is so recommended too!

I have been following your blog for quite some time! I wanted to share that I have recently been going to these “eatwith” events with locals around Barcelona. They invite guests into their home to eat with them, it is a great way to eat different kinds of food and meet new people. I suggest you go, I think you would enjoy it.

Thanks for all of your tips so far, just wanted to pay it forward as well.

I love this city, it’s colourful, Young and has a lot of vitality. I don’t know why I don’t live here, I was last summer in Barcelona and was amazing, and the best restaurant was Cheri!

I’m from Catalonia, living in Singapore now, and thanks to your posts I’m really enjoying my eating experience in Singapore!

I’m very glad to read that you loved Barcelona! Hope you come back soon and see many many places more around it.

I just wanted to make a clarification on the post, when you said:
Spanish Tomato Bread – toasted bread rubbed with fresh garlic and ripe tomato, then drizzled with olive oil and a bit of salt – is something that’s eaten all over Spain.

Actually, bread with tomato is only eaten in Catalonia, the rest of Spain is not used to it yet, although lately our way of eating bread is becoming more popular in other regions of Spain

Bread with Tomato and Olive Oil is probably the thing I miss the most now that I’m here in Singapore.

This is my first comment in the blog, so I will take the opportunity to say Great Blog and Thank you very much!