There was a big hoo-ha at the dining table when I mentioned that it was my first time having the famous Vietnamese Pho. My one and only experience with Vietnamese food was during last Christmas Eve; where I had an impromptu party with dweam and monoxious at NUOC Vietnamese Restaurant Orchard Central.

When they asked me which Liang Seah Street Restaurant to go for dinner, I suggested Madam Saigon Vietnamese Restaurant as I wanted to try the Pho.

A platter of Spring rolls ($17.90), which is a popular Vietnamese dish, appeared on the table. Luckily, they didn’t disappoint: the semi translucent raw spring rolls went well with the sauce; as for the deep fried ones, we agreed that deep-fried food always taste good. 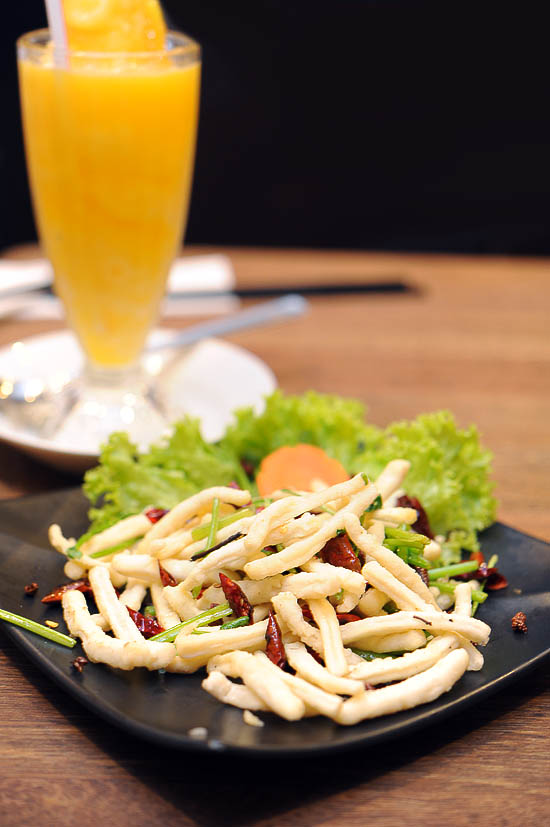 The Vietnamese Fried Calamari ($9.50) was very different from the ones that I had before. For one, it wasn’t round and they were broke down into strips, bearing a close resemblance to fries. It was a very addictive snack/appetizer, and we enjoyed it with the light dipping sauce. 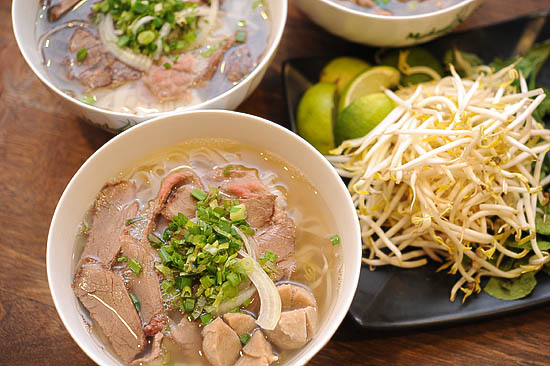 Coming back to the Vietnamese Pho ($8.90), I thought that Madam Saigon’s rendition was not too bad. But Arissa who tasted Pho in Melbourne thought otherwise. Valerie definitely didn’t think much of it too, for she had savored the best Vietnamese Pho while she was in Vietnam before; cannot get any more authentic. It was hard to pin-point what was missing, but it was just different from the one they had before. Perhaps, it’s a case of the grass being greener on the other side. But since there aren’t that many Vietnamese restaurants in Singapore, we just have to make do with what we have. If not, get a ticket and fly to Vietnam this weekend for a delicious bowl of Pho.

We tossed lots of raw beansprouts, mint and squeezed wedges of lime into the Pho. There was silence for a a few jiffies, and this life-changing moment of my first banter with Vietnamese Pho has set its page on my history.

Instead of having Western or Japanese food all the time, why don’t you try Vietnamese food at Madam Saigon Restaurant Liang Seah Street for dinner?

If you find that you like Vietnamese food, you should try this other place:

at Smith Street. They have a very good beef pho! The soup is light but very flavorful.

my vietnamese friend recommend to try the one at Seah Street, not bad and cheaper too

I just got back from Vietnam. Hanoi to be precise, so the pho there is lighter with less condiments. The ones we have in Singapore are frequently the Southern version, with more herbs and condiments.

I liked Madam Saigon’s version – had it a few years ago. But my favourite one in Singapore is the Pho Hoa one at Holland Village.

Im Vietnamese and i must say Pho in Madam Saigon is 1 of the worst in Singapore
Pho Hoa or pho at Yummy Viet – China town or in Geylan ( i dont remember the exactly address) is better
Although for me, all of them are still not good, cuz they cook as South Vietnam style that sweeter and eat together with onion, bean sprout, peppermint , etc so the taste is more familiar with Singaporean
Real Pho is from North Vietnam, we only use high quality beef , we dont use beefball, but in S they used beefball so it’s cheaper

and we only use lemon, dont eat with bean sprout, onion or peppermint

The soup must be the beef bone that was boiled for more than 10 hours, but I dont think any Vietnamese restaurant here do

, I think they used the artificial flavors instead, so it will be save money and time
Vietnamese Fried Calamari

Vietnamese Fried Calamari?
Im Vietnamese and have never eat something like this ha ha
I think they make the new style so it will be more famaliar with Singaporean’ taste

lovelyloey: thanks for the recommendation! I am craving for Vietnamese Pho as I type this! heh

ries: Have you been there already? the pho is cheaper? how much is it

quynh: Hello! thanks for sharing all the information! Oh the North Vietnam version doesn’t come with beansprout? I remember reading somewhere that usually pho comes with lots of beansprout, so that’s for the Southern version only? yeah i doubt they boil that long here. I suppose it’s just a fanciful name that they come up for the calamari! Other than Pho, what’s the must-try Vietnamese dish?

try “tiet canh”? bet you will love it

i recommend Pho Hoa (lor mambong in HollandV, or Suntec) if you want to try real Pho

the place is specialized to serve the dish. So far i think that’s the best one. cheers.

I’ve just come back from “Madam Saigon”; a good restaurant, one of the best lunch you can find around Liang seah Street or Bugis Station.

Among Singapore’s Vietnamese restaurants or “eateries”, my favourite is Long Phung, at 159 Joo Chiat Road; I LOVE the coconut zuzu, the soups, the rolls and the excellent Vietnamese coffee….
Forget the “brown water” that Starbucks use to serve…
In our opinion (we are a team of Italian technicians working here) this is the only coffee, in Singapore, which could be sold also in Italy!