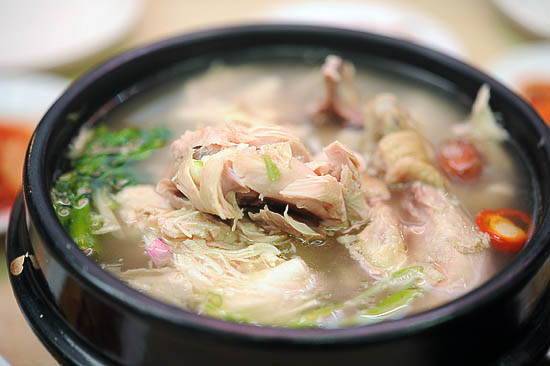 It’s a pity that Korean food in the Singapore food scene isn’t as strong as its Japanese counterpart. Most people tend to crave for sushi rather than kimchi. I’m sure you can easily rattle off a list of good Japanese restaurants, but it’s not the same story when it comes to Korean Restaurants in Singapore.

My friends were craving for Korean food, and after hearing so much about Togi Korean Restaurant at Mosque Street, we decided to check it out on a weekday night.

The Ginseng Chicken Soup ($21) was mightily awesome. Even though the soup wasn’t that flavorful, the chicken was really tasty as it absorbed the finesse of all the ingredients. 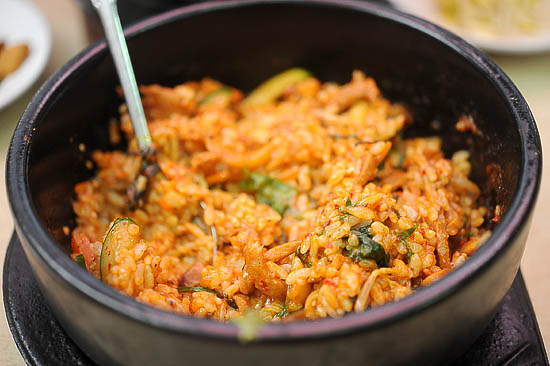 Everybody loves bibimbap – tell me who doesn’t?

We poured a lot of the spicy-sweet chili into the pipping hot stone pot, stirring and mixing the Bibimbap ($11) into a delightful color of red, yellow and green. It looked good, it tasted even better! With an assortment of vegetables, mushroom, chicken, chili and steamed rice jumbled up — the bibimbap is a dish for all seasons. 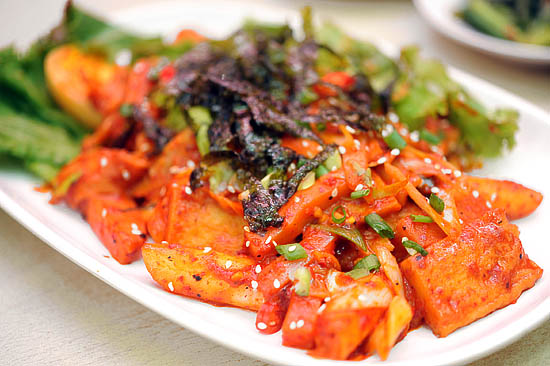 We also had the stirred fried Spicy rice cake ($12), a famous street food in Korea. To be fair, I think it’s an acquired taste, and it’s really one of those dishes that you either love or hate.

I looked at the table, and fought the temptation to order the crispy Korean crispy pancakes: “No Brad, there’s too much food left”. Another visit to Togi Korean Restaurant, perhaps? 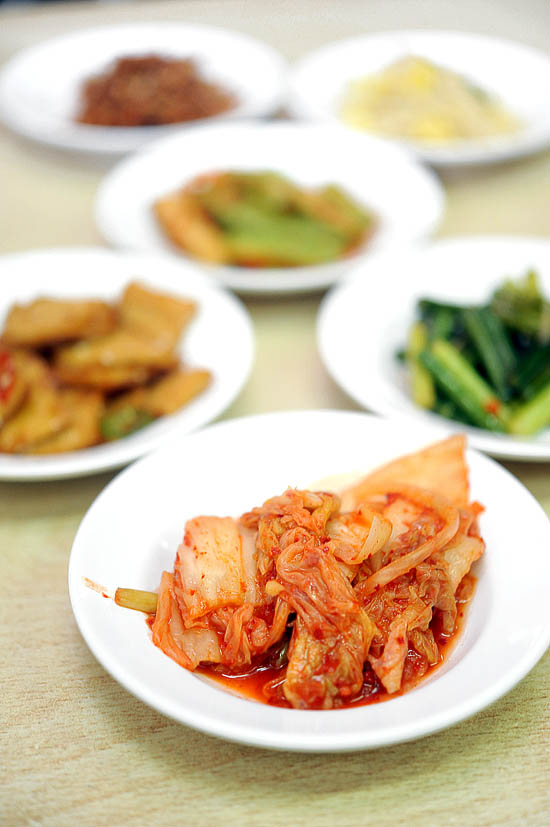 Judging by the crowd on a weekday dinner, Togi Korean Restaurant is definitely one of the more popular Korean restaurants in Singapore. Prices at both Togi and Kim’s Family Restaurant are in the same range, but the latter serves ten side dishes while the former only has six.

Even though I enjoyed the dinner there, Kim’s Family Restaurant is still my best Singapore Korean Restaurant.

Me, I’m not that great a fan of Korean food, but I admit I really enjoy their chicken ginseng soup – it’s what I order everytime!

There is a wonderful hole-in-the-wall Korean restaurant in Manhattan near Columbia University called Mill Korean. The food there has been praised by native Koreans, and it’s funny you should post something like this on the very day I was thinking about that place!

This food sounds delicious. The dish I always eat at Mill Korean is dduk kai gooksoo, which has a very tasty, smooth broth. Personally, I love spicy rice cakes, and one of the specialty dishes there involves a lot of them – I can’t get enough of that one either.

You should definitely go back there and try the seafood pancake, spicy beef soup, spicy tofu soup or kimchi fried rice. They are delicious. And you will not regret it!

Hi Brad,this look delish!
I wished they had more halal korean food around.I love bibimbap though(of course the halal one). And yeah I think I saw you earlier today at bukit timah the one near the many makan foods,right around 6 ish..wanted to say Hi but very shy..hehe

hi brad, perhaps u might want to give hannsang at square 2 a try one of these days. affordable and rather authentic:)

Jang Shou Korean BBQ restaurant is the one visited by Rain when he came to Singapore for a concert. But they serve mostly BBQ.

u have to try their CHEONG GUK CHANG at togi.. its a smelly bean soup.. like our chinese chou dou fu.. was really good when u pour the steam rice in!!

togi is currently the only restaurant tt sells tt in sg

Okay.. I am eating Togi tonight. I love the bibimbap so much!!!

Eli: whoa, if native koreans like it, that means the place must be doing a good job! yea korean food is lovely indeed

Bok: HOW MANY TIMES have you been there? haha seafood pancake, spicy beef soup, spicy tofu soup or kimchi fried rice — okay! I jotted down everything already! Have you tried kim’s family restaurant? do give it a shot and let me know if u like it

hungrybunny: HELLO! yea i was there for dinner! haha next time if u bump into me, must give a shout-out okay! : )

merlinda: hannsang at square 2? Roger that! roughly how much is it per pax?

Timothy: so far i haven get to try korean bbq before. I heard that the restaurant is pretty pricey? Not very sure how much is it, thats why i have been putting off my visit there! lol

minty_sky: REALLY? they r the only Korean restaurant in Singapore that sells the smelly bean soup? Hmm.. now you are leaving me with no choice but to go back for that :p

Raine: eeyer, why u nv ask me along?

Hi, I’m an avid reader of your food blog

btw I’m in Korea for uni exchange and the food here is AWESOME. I think the price that korean restaurants in singapore set for the street food (rice cakes etc) are overpriced D: really good ddukbokki (spicy rice cakes) cost only 2,500won!!!

I like korean food but I don’t think many sg-based restaurants produce it well… the thing abt korean “restaurants” in korea is tt many of them are small-sized and family-owned so they don’t venture out of the country, or even state for tt matter. they also don’t franchise it out… and most unfortunately, these “restaurants” are the ones with the most authentic & yummy food.

brad, i love togi, 2 street from my office. I prefer togi to kims, becos the atmosphere more simple casual and very homely haha. The food i find togi is as good and cheaper. My fav is their silken tofu soup or bean paste soup if u like stronger taste.

hannah: hello thank you! hope u are having a good time in Korea! how long will u be there for? makes me so jealous of u right now. haha yea i think u are right, cos unlike Japanese restaurants (who franchise and expand out to other countries), Korean restaurants tend to be smaller in scale and family-operated. do eat more there, i will eat your recommendations if i ever go to Korean for holiday! : )

cleartear: really? but the prices at both togi’s and kim’s family restaurant are about the same? and there’s more side dishes at kim’s too! haha

Hi ladyironchef/brad, i’ll be in korea for 5 months only ): haha… oh i do post pictures of what i eat on my blog / interesting food items so if you’re free you can have a look

i’m a slave to food too hahaha.

oh yeah the thing abt the korean restaurants tt we go to is that it’s difficult to give an exact address to the shop cos many of them are small/alleyway/hole-in-the-wall shops which only the koreans know, or if you’re lucky to stumble upon. if you ever go to korea it’s best to have a local there to guide you, or someone who knows the place really well… haha actually this advice applies to every tourist in ay country la

You should try The Charcoal BBQ Korean Restaraunt at Pasir Panjang (opposite haw par villa). They serve authentic korean food. Marvelicious ! The restaurant is packed with both ‘s a hit for the korean food lovers. It’s packed with locals and Koreans especially during dinner and weekends. Though it is not located conveniently for those relying on public transport, you definitely need to make reservation (tel: 64640872) especially dinner time & weekends else be ready for a long wait. Food is great. family-friendly restarant (An inhouse mini play area for kids too so you could enjoy your meals with family/friends while watching your kids play safely near you). You can choose to sit on the floor or the normal bench. They do have rooms for more than 10 people (good for friends/family gathering). I personally love to sit on the floor where you could look out of the window while enjoying your meal (need to remove your shoes though). the sit-on-floor tables are a hit and taken up fast. do be there early to grab the “hot” seats. ENjoy…

I second Peggy!! I really love that pasir panjang korean restaurant. I have a few korean friends so at least once a month, I always frequent korean restaurant. The Charcoal BBQ Korean Restaraunt at Pasir Panjang is not very expensive (not cheap but definitely more wallet friendly) yet taste better. Meat wise, I would recommend the one beside esplanade but in terms of service and side dishes they serve, definitely the previous. The kimchi is really good and I love how they serve rice soup for dessert !

hannah: Have fun in Korea, and remember to eat a lot! : )

peggy: yeah i know, the Charcoal BBQ Korean Restaraunt at Pasir Panjang has been there for a long time yeah? Usually how much do you spend per person? I heard it’s quite pricey

non: the one beside esplanade, what’s the name of the Korean Restaurant?

Couldn’t remember how long this restaurant has been around (maybe a decade or even longer). We usually spent ard $35-45/person for 2 meat items, bibimbap, grilled mushrooms (must try), cold glass noodle (v refreshing). Would recommend the cold glass noodle as last item to serve as it is really very refreshing after eating all the BBQ n hot items. Shiok !
The side dishes (free flow) comes free with meat items ordered already filled up the table. Think there is a dozen of side dishes. Many a times, we think that the side dishes already can fill up our stomach ! ha….

Though the price is not really economical, it is worth the value taking into account all the side dishes served, the authentic korean food you get, etc. The bosses(both korean – husband & wife)are friendly and customer oriented and are there to recommend you dishes if you need help. I remembered the bosses actually offered me their rice-wine as treat on my birthday. I was rather resistant at first but it turned out to be rather nice.

Thanks for recommending this. Went for lunch today and loved it. Great side dishes and the staff were very friendly. Will definitely go back here.