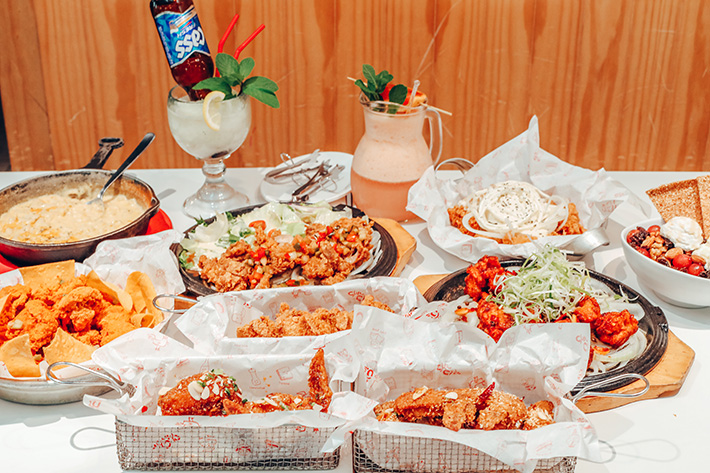 Just thinking about the addictive crunch and tender interior of Korean fried chicken is enough to send many of us into a passionate frenzy; in contrast, the disappointment from a limp, oil-sodden number warrants a frenzied outrage. To prevent yourself from feeling similar disgruntlement, head over to Chir Chir for a clucking good time!

Not just any other Korean fried chicken brand, Chir Chir (say it with us, chi-re chi-re) doesn’t just hail from the birthplace of said dish, it is one of the more prominent chimaek – a Korean portmanteau of chicken and beer – franchises with over 100 outlets in South Korea. To preserve the authenticity of its fare, all Singapore outlets use sauces and marinades imported from South Korea. No watered-down flavours here!

Adding on to its extensive menu, Chir Chir is opening up 2020 with a host of 4 new delectable chicken mains: Cream Onion Chicken, Mala Chicken, Nacho Chicken and Yu-Ling Chicken. As each dish features a distinct, fusion-flavoured punch that’s perfect with an ice-cold beer, sample them all for a globe-trotting gastronomical Korean fried chicken experience unlike any other! 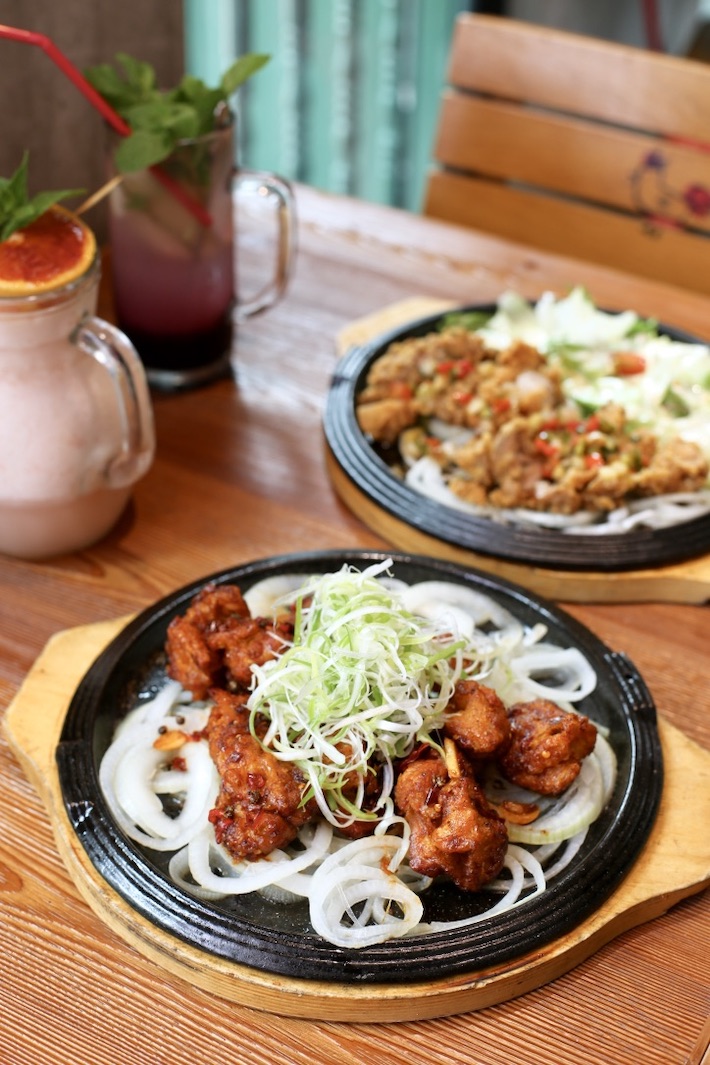 You’ve heard of Korean fried chicken slathered with the iconic deep red, sweet-peppery yangnyeom sauce, but have you ever tried mala Korean fried chicken? Keeping on a parallel spicy tangent with a regional twist, Chir Chir has decided to capitalise on the prevalent local mala craze by combining its bestselling chicken with the piquant spices of mala dishes to create Mala Chicken (S$25.90++) as part of its new Signature menu.

Hued in a milder red than with its yangnyeom cousin, the Mala Chicken pieces are deceptive in their colouration, with only the bits of mala spices adhering to the exterior of the chicken suggestive of the flavour within. Despite the glossy sheen, each piece holds Chir Chir’s signature crunch, with the fragments of mala spices further adding texture.

For those concerned about a blast of spice, fret not, for each mouthful brings about a slight bite of numbing spice – enough to jolt your taste buds awake without masking the taste of the chicken beneath. To get this rich, smoky mala spice infusion, the kitchen pan-fries the ready fried chicken in a heavy potpourri à la mala xiang guo dishes, mixing until the spices envelope and permeate each piece. 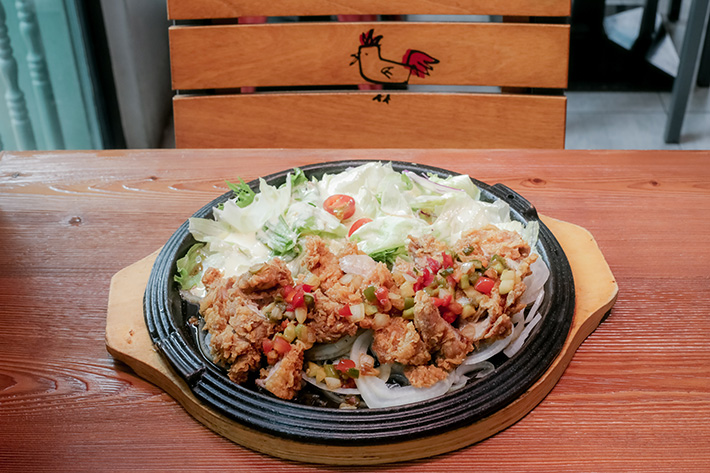 For the spice-shy, or those looking for something with both sinful and healthier halves, look towards the other new item on the Signature menu, the Yu-Ling Chicken (S$23.90++). Pivoting to an antipode of Chinese flavours, while the Mala Chicken has a husky smoulder of spice, the Yu-Ling Chicken subsists on a refreshingly tart profile courtesy of its relish.

Equally vibrant in visuals, the dish is an eye-catching array of colours: golden chicken strips adorned with vivid relish contrasted against the bright onion rings and lush green salad. More than a perfunctory combination, the salsa brings forth a compelling contrast between the full, richness of the fried chicken and effervescent lightness of the salsa, allowing for extended enjoyment without the onset of taste saturation.

More than a secondary thought, the salad is crisp and fresh, making it wonderful for interrupting the heavier flavours from the chicken and salsa. For an added flavour dimension, the leaves are drizzled with a hot bacon dressing that imparts a subtle spicy and savoury note that makes munching on greens that much more gratifying. 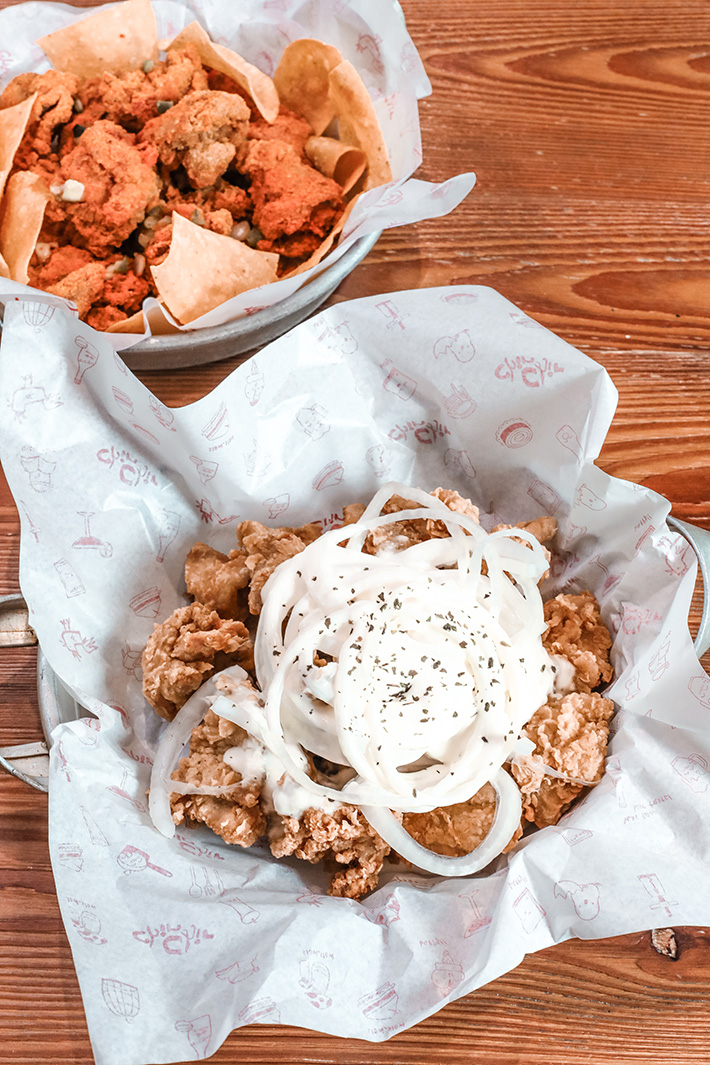 Before you decide to fill up on the Signature dishes, take a gander at the latest entrants to Chir Chir’s Special menu. Opening with the Cream Onion Chicken, it seamlessly combines two key elements that many adore into a single dish, allowing diners to fully appreciate the piquant zest from the cream without losing the crispness of the chicken.

Instead of creating a complex ritual of sour cream layering wizardry – which can easily throw off the crisp-moist duality that Chir Chir has perfected – the kitchen team came up with a simple yet effective solution: create a mouth-wateringly luscious cream onion sauce that doubles as a dip. A prime culinary example of Occam’s razor at work.

Each serving comes with a generous heap of sour cream finished with an equally abundant stack of finely chopped onion rings. Enjoy this dish by rolling your chosen chicken chunk in a gratuitous amount of sauce before chowing down. The brine of the chicken from its secret marinade is complemented by the tangy sauce, with the cream made even more flavourful by a tinge of sweet acidity from the onion slices. Don’t forget to pair the occasional mouthful with an onion ring; its invigorating freshness helps to keep any potential cloying at bay. 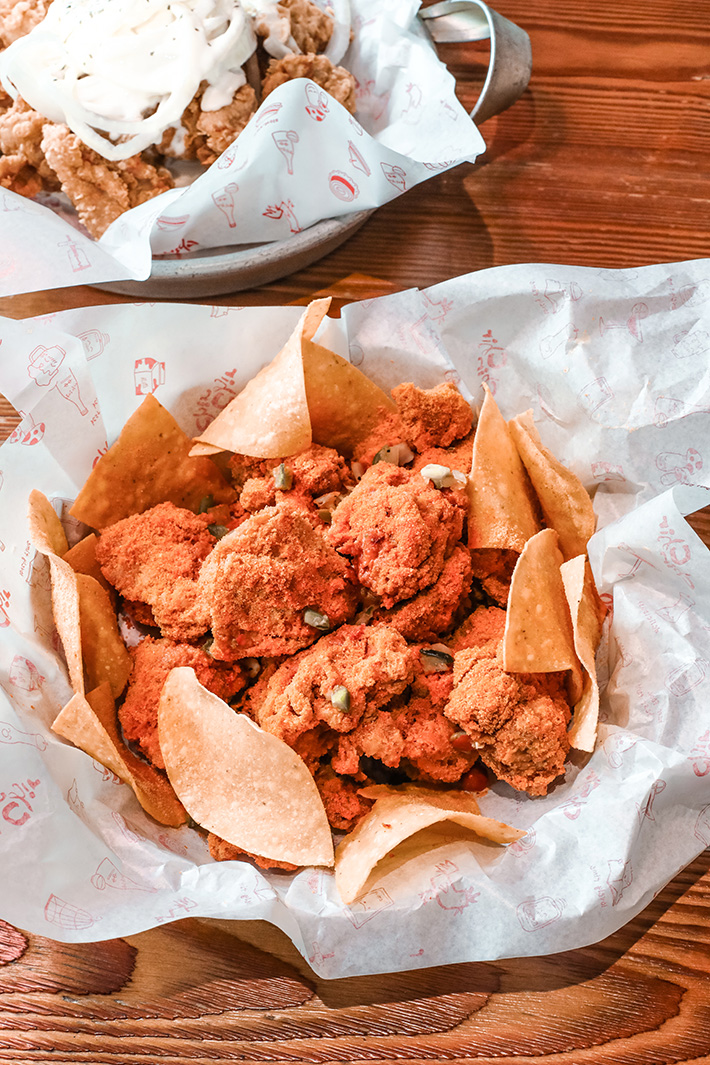 Spinning over to our final destination of North America, Chir Chir’s other new Special menu inclusion is a Tex-Mex inspired number, Nacho Chicken (S$25.90++). A visual delight, the lively orange chicken tenders circled by a ring of corn tortilla chips make for a fantastic focal dish at any table.

Dusted in an abundant helping of hearty chicken chilli cheese powder, in line with its gastronomical influence, each bite of chicken tenders elicits the peppery profile of chilli complemented with a smoulder of cheese. Unlike other dishes that see one profile dominating the other, Chir Chir ensures that both are equally present – the chilli to bring an enticing thrill to each mouthful, and the cheese to intensify the intrinsic savoury flavour of the chicken.

Don’t forget about the chips! Have them with the chicken, have them as pre-meal finger food, or have them later on the side; regardless of your choice, the chips offer a textural variance against the juicy, tender bite of the poultry. Moreover, these chips go marvellously with a chilled drink of your choice, and keep your fingers busy with the ebb and flow of the table’s conversation. 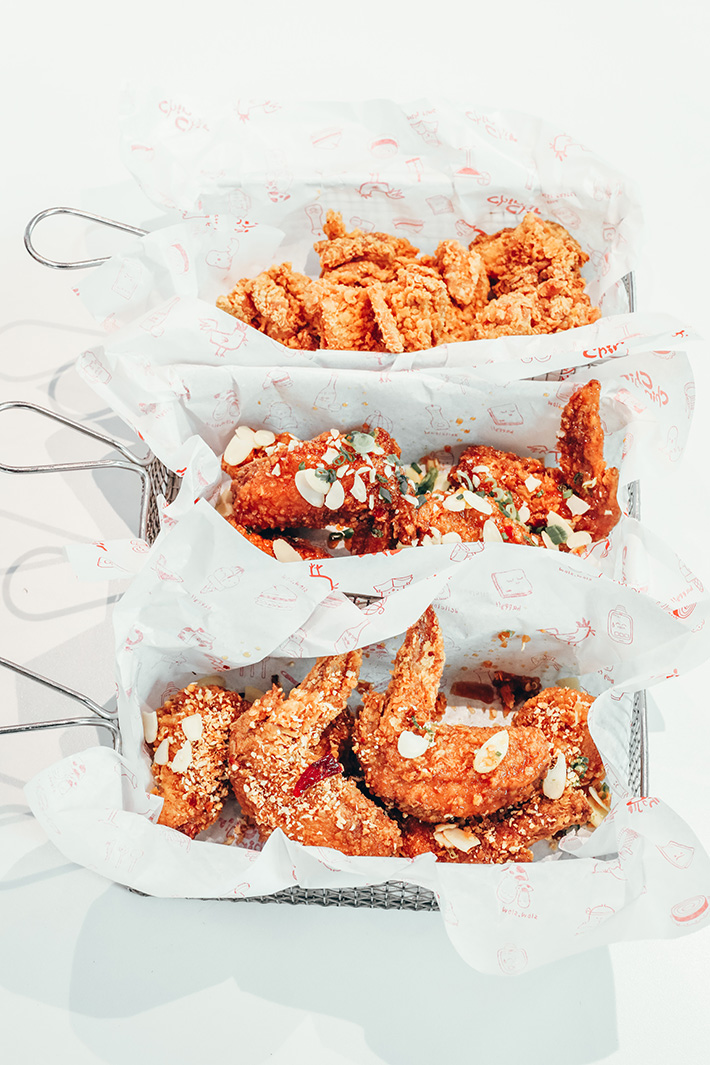 For those who prefer to stick to more traditional flavours, or for patrons who would rather masticate on a single-person serving instead, take a look at Chir Chir’s customisable à la carte offerings instead.

Available in the classic Crispy, Garlicky, Spicy and Curry flavours, diners can decide on which type of cut (tenders or drumlets and winglets) they want, as well as the number of pieces (6pc for S$9.90++; 12pc for S$17.90; 18pc for S$24.90++) they are most comfortable having. 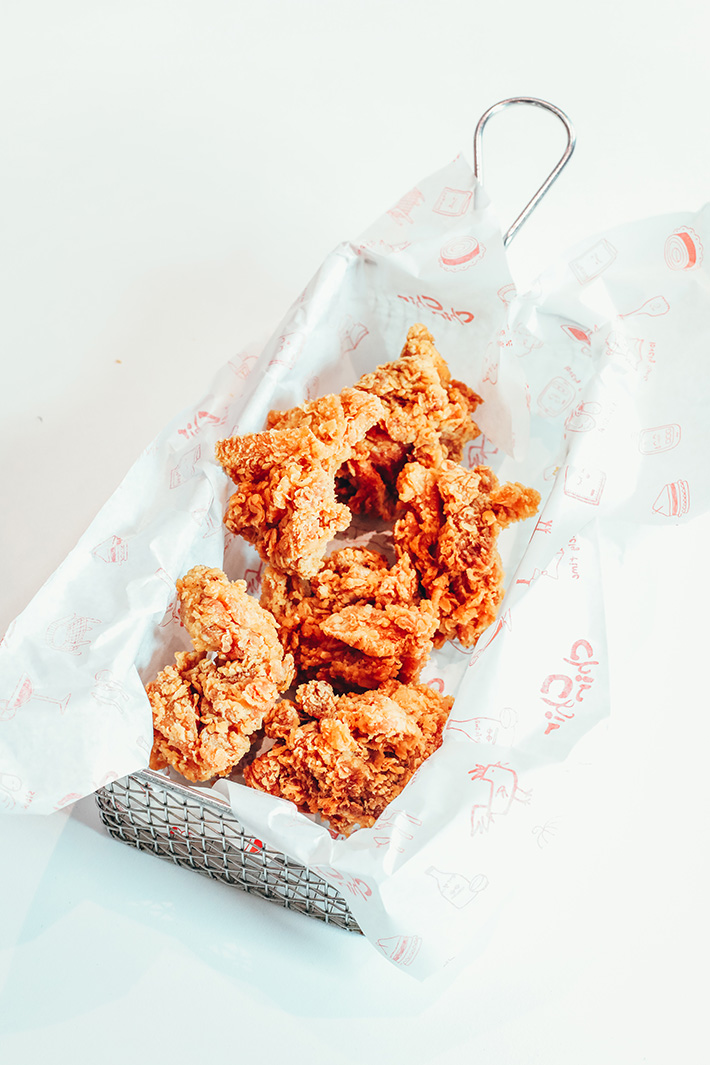 Of the three flavours we will explore, the most unassuming albeit the most time-honoured of the lot is the Crispy Chicken. In line with its moniker, this variant has a no-holds-barred crunch that will put most fried chicken establishments to shame. Despite the crispiness, the batter is thin and airy, and does not leave a sheen of oil in its wake; a testament to the kitchen’s exemplary skill. 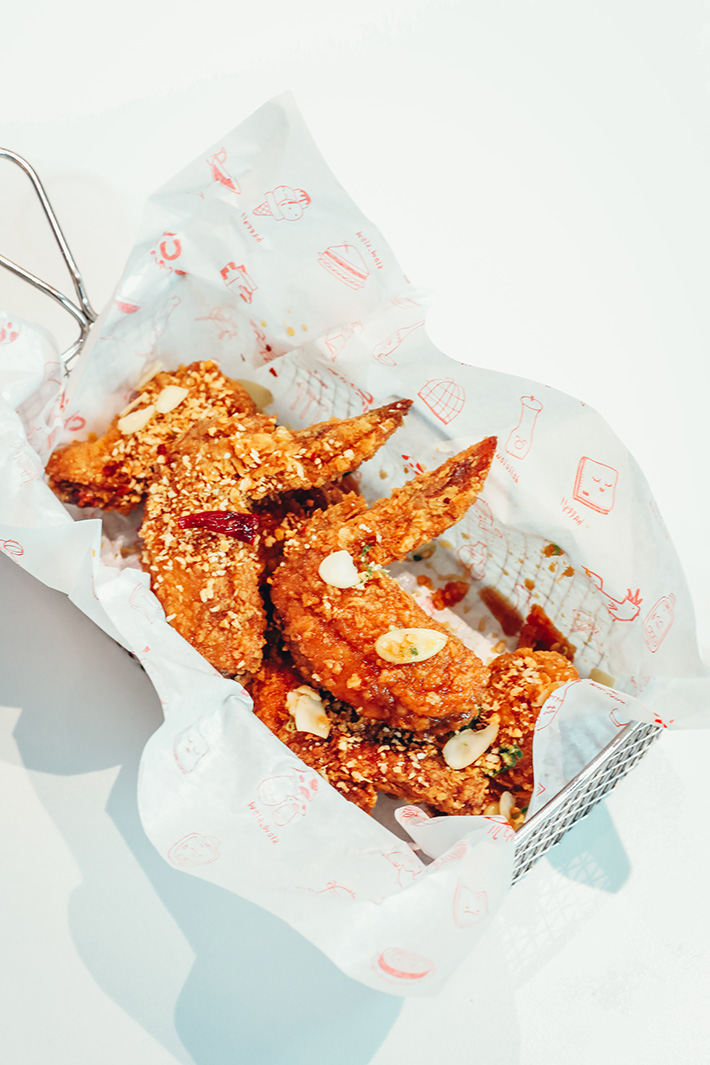 While a full-on garlic flavour may cause some of us to retreat in unease, Chir Chir manages to retain the zest of garlic in the seasoning process without incurring too pungent an aftertaste. This leaves behind a remarkably flavourful number that is made even more alluring by a suggestive simmering of spice from the presence of dried chilli slices. 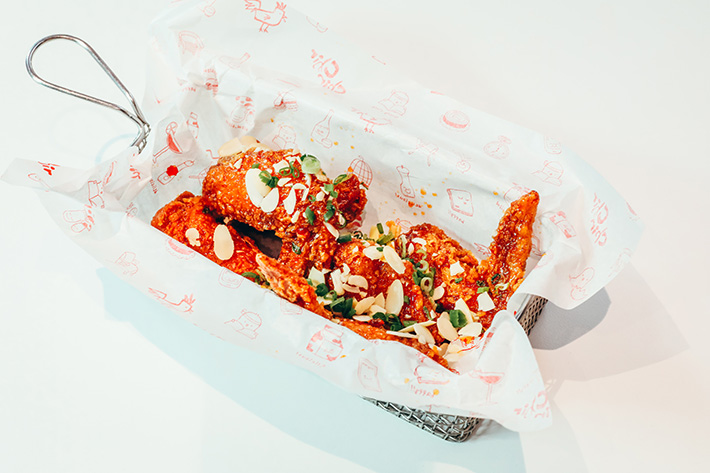 A flavour quintessential to Korean fried chicken, this iteration is beloved for its extra dimension of sweetness while remaining every bit as palatable and sapid as the Garlicky Chicken. Despite the sticky, saccharine veneer, the chicken retains its trademark crisp exterior, creating a divergent mouthfeel between the softer pliant sauce and the crackling crunch beneath. 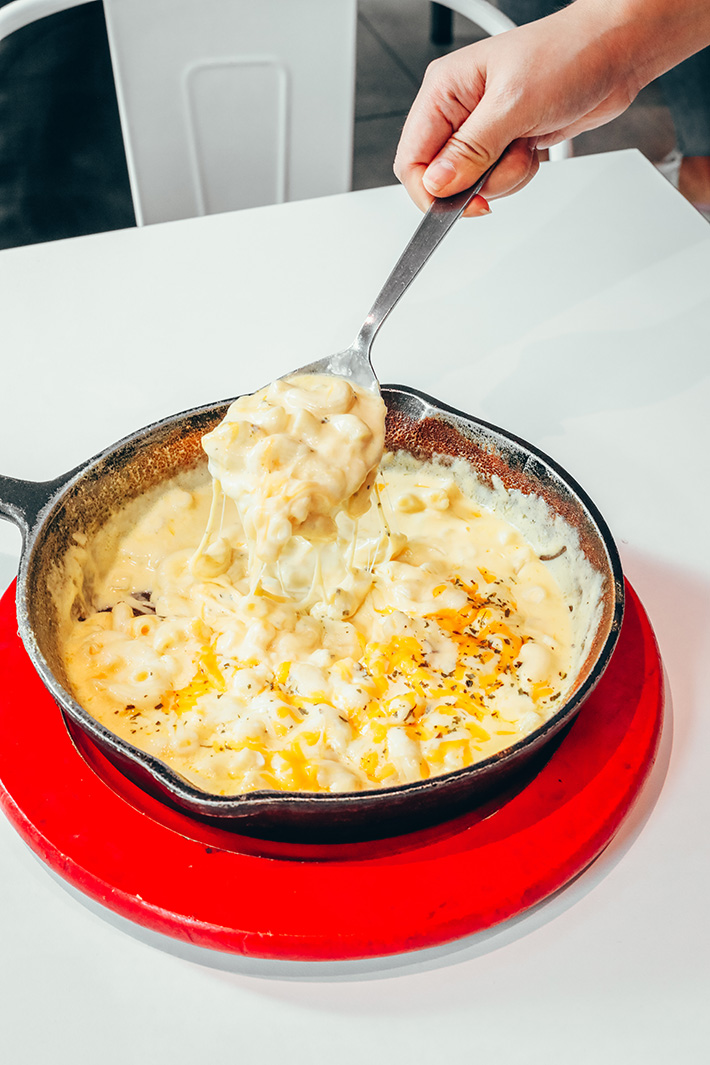 Still hungry for something else after your chicken main? Why not look towards Chir Chir’s list of sides to supplement your meal! For those seeking something else that is savoury, the Mac & Cheese is a particularly sumptuous option with its thick, mouth-watering layers of cheese.

Preceded by the characteristic earthy aroma of the cheese mixture, the dish arrives in a heavy iron-clad pan blanketed in a creamy heap of sun-touched gold. Cheese-lovers will be pleased to know that the blend is created from a composite of multiple cheeses and flourished with shavings of cheddar and mozzarella for the occasional spike of more intense flavour.

Pulling apart the mixture reveals a substantial condensed layer of macaroni. Deeply embedded in the bed of cheeses, each piece of pasta is not only drenched in the mix, the cheeses have permeated the space within as well, which makes for an especially delightful eating experience. Prefer to subsist on something sweet instead? Opt for Chir Chir’s Honey Grape Salad (S$16.90++) for a post-meal dessert number that not only rejuvenates your palate, but helps whet any floundering appetites as well.

An enlivening dish that is as interesting on the palate as it is on the eyes, each mouthful invites an assortment of textures and flavours: the sweet dewiness of the grapes; the hard bite and mild taste of the almonds; the granular saccharine profile of the dried raisins; the slight bitterness of the walnut morsels. To coalesce the mix into a coherent whole, it is finished with homemade whipped cream, ricotta cheese and a light misting of honey. If the dish is too sweet for your liking, squeeze in a few drops of lemon to even the flavour out. 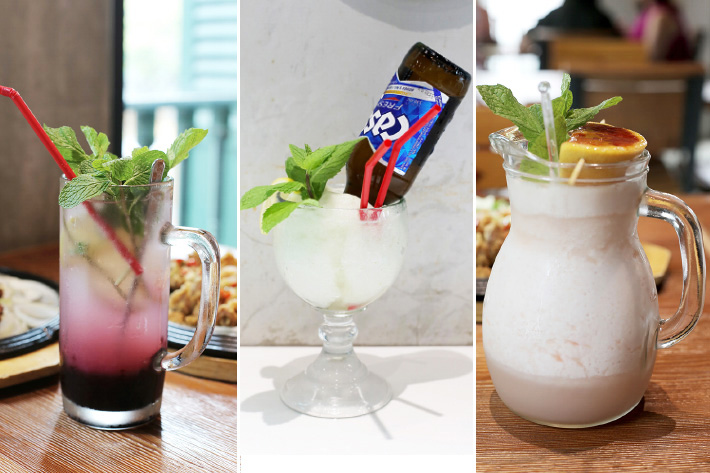 Alternatively, why not grab a cold drink to accompany your meal instead? Even if you’re a stickler for classic beverages, take time to peruse Chir Chir’s extensive list of unique concoction. Be it the fizzy, luminous flavours of a sparkling fruit drink, the smooth richness of a fruit smoothie, or a more playful alcoholic-infused variant – with a name like Lady Killer, it is bound to leave a frisky impression! – there is always a refreshing, ambrosial drink for you at Chir Chir.

The next time you feel the urge to luxuriate in the decadence of Korean fried chicken, grab a few of your food buddies and head over to Chir Chir. With an unparalleled selection of traditional and fusion fried chicken flavours, and an equally extensive list of in-house drink creations, all housed within a bright and inviting space with pleasant service, a chimaek gathering at Chir Chir will likely be a memorable one unlike any other.

Terms & Conditions:
- Quote “Ladyironchef” to enjoy this promotion
- Valid for dine-in only
- Discount only applies to full-priced items; not applicable to sets or 1-for-1 beer
- This promotion cannot be stacked with other discounts or offers

This post was brought to you by Chir Chir.