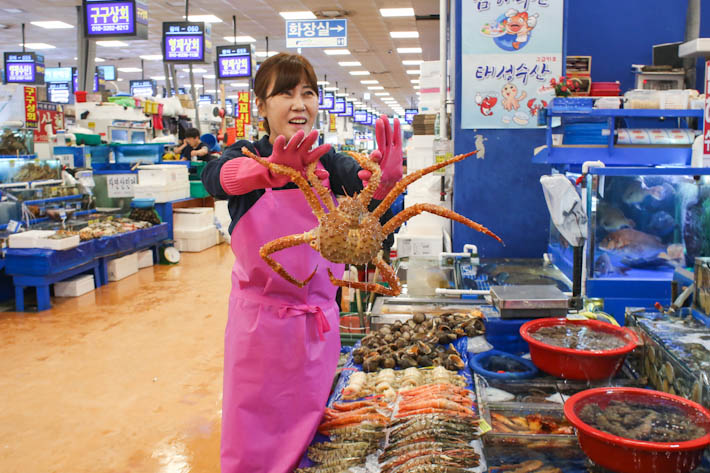 The famous Noryangjin Fisheries Wholesale Market in Seoul is in a difficult predicament; both the old and new markets are located just side by side and this has resulted in a portion of the vendors moving over to the new building while the rest continue operating at the old market.

In an attempt to modernise the fishery industry to promote tourism growth, the new Noryangjin market has been built to accommodate more stalls in a cleaner environment. While the intention is to increase business opportunities for the owners, many owners from the old Noryangjin Fish Market refused to move over and cited a smaller land area and increased rental fees as their main concerns.

If you are curious about the similarities and differences between the old and new Noryangjin markets, read our guide to find out more. 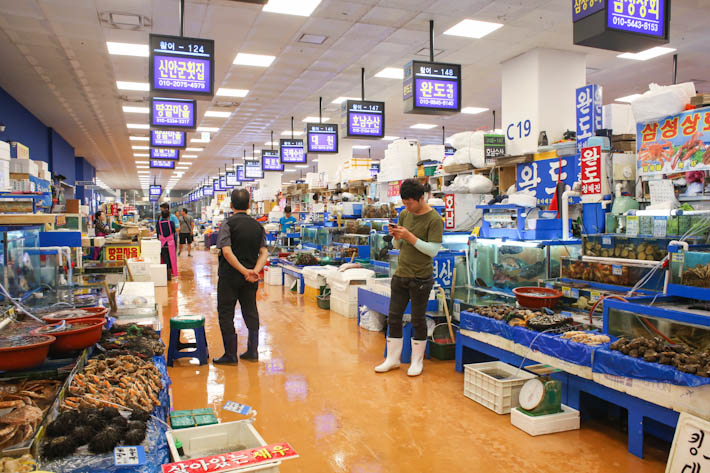 The new Noryangjin Wholesale Fisheries Market runs the exact same concept as the old market—visitors can buy the seafood for takeaway or have them fresh at one of the many restaurants there. 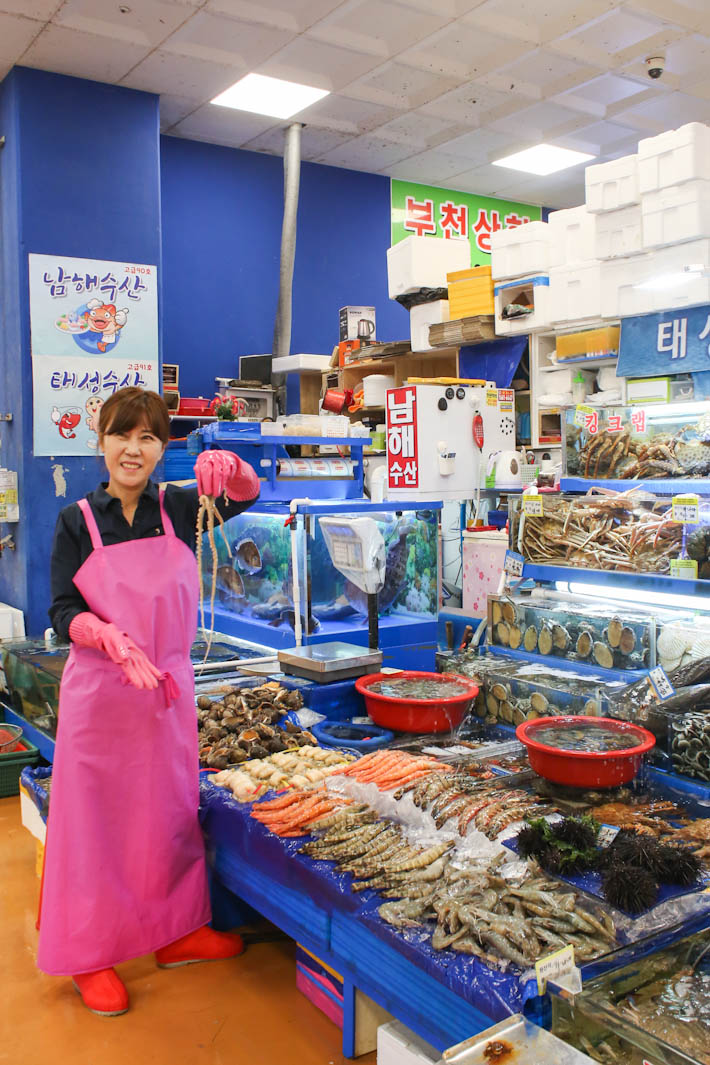 Expect to be greeted with many varieties of live seafood—ranging from octopus to prawn, abalone, crab and lobster. The choices are never ending and that is one reason why we would always visit this place when we are in Seoul. 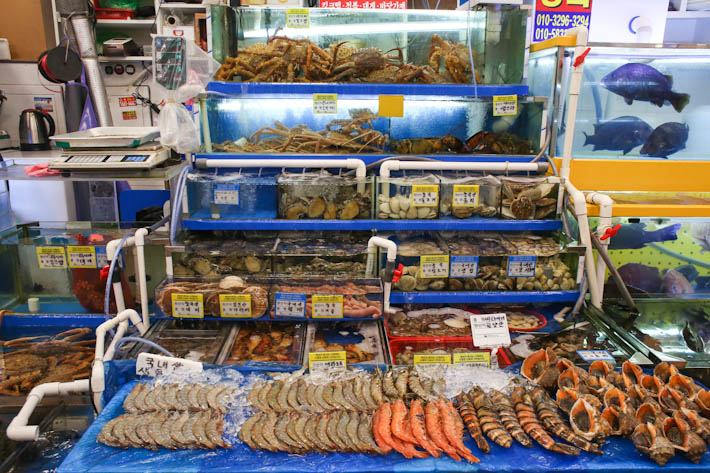 Vendors provide basic services such as slicing the seafood for sashimi and packing them up. If you are interested to dine there, there will be someone who will bring the seafood over to the restaurants for you. #2 THE NEW BUILDING IS BRIGHTER AND SPARKLING CLEAN

In contrast with the old market which has dimmer lighting and the usual wet market odour, the new market is brighter, cleaner and feels like a modern supermarket due to its new retail facilities. However, visitors should wear shoes with a firm grip as the floor is wet and slippery. 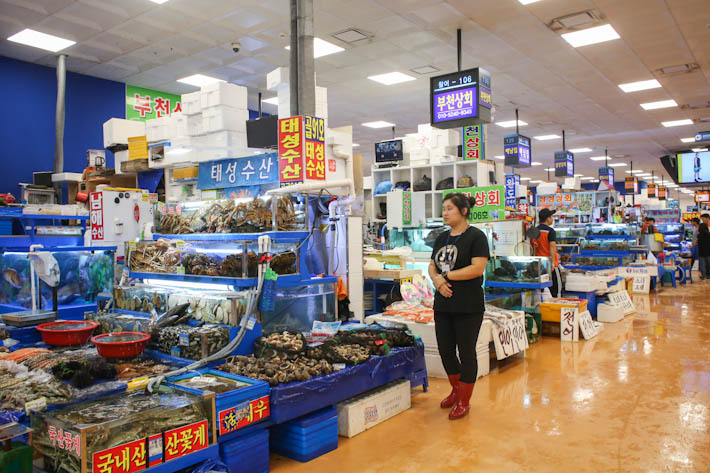 While there’s plenty of space to roam around the old market, the new market has narrower pathways in between the rows of stalls for people to walk along. Visit during off peak seasons so you do not have to squeeze with the crowd! 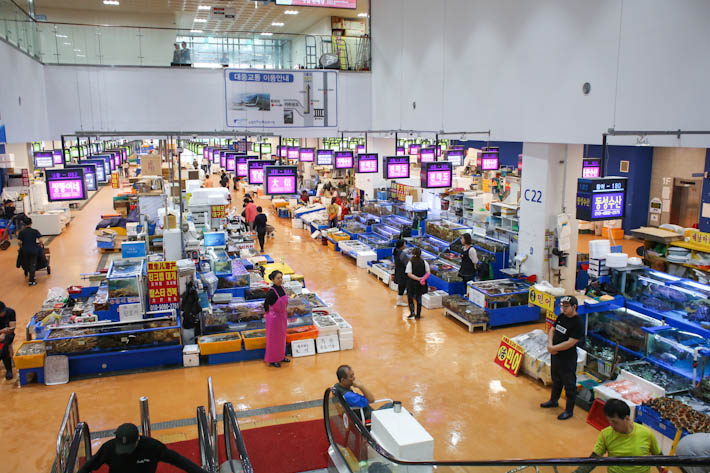 #4 THERE ARE TWO LEVELS OF SEAFOOD STALLS TO CHOOSE FROM

Yes, the new market has not one but two levels of seafood stalls! It is impossible to cover the entire place on one visit but we sure aren’t complaining—who doesn’t like more choices right? 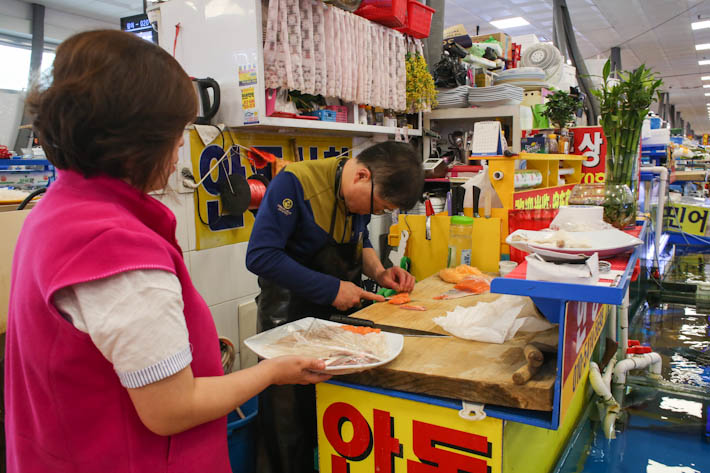 When you have decided on the seafood you want to indulge in, head over to one of the restaurants on level two and decide on how you would like your seafood to be prepared. As most (if not, all) of the stalls are affiliated to the dining establishments, there will usually be someone who will lead you to the restaurant.

As expected from the new market, the restaurants here are modern and make use of bright and cheery colours to attract diners. This is a stark contrast to the traditional eating places where diners sit on cushioned mats at the old Noryangjin market. #6 LACKS THE BUSTLING ATMOSPHERE FOUND IN THE OLD MARKET

Although the new Noryangjin market is supposedly an upgraded version with modern facilities and infrastructure, it lacks the same vibrance and bustling atmosphere as the old market.

For first-timers to Noryangjin market, we would still encourage them to visit the old market first as that is where you get to really feel what a traditional fish market is like in the past. However, the new market is still worth a visit as the sheer variety of seafood and number of stalls over there is simply mindblowing.