Scoop Therapy is a dessert-only spinoff of Group Therapy, serving mainly ice cream and ice cream-centric desserts. The small space sits in the East of Singapore, and you might already have seen photos of their Instagram-worthy desserts on your social media feeds.

We were pretty tempted by pictures of their sultry S’mores and Ice Cream Bomb floating around social media, so we made a trip down to find out what the hype is all about.

So, was the trip worth it?

The little dessert cafe is located on the first floor of The Odeon Katong, complete with full glass walls and a relatively intimate interior. There are some outdoor seating too, albeit limited.

They have their ice cream selections on display but unfortunately, the only drinks were lemonade and hot chocolate only.

Nevertheless, that did not stop us from wanting to try the two photogenic desserts that we came here for. The ice cream flavours are fixed for both desserts, with chocolate inside the S’mores and Earl Grey for the Ice Cream Bomb. 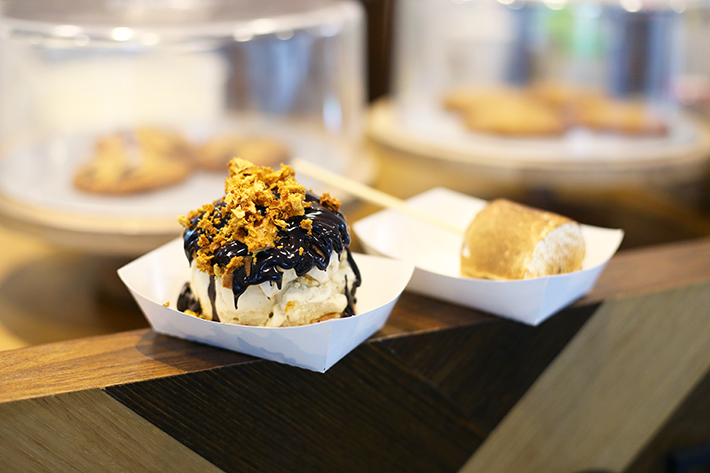 Mimicking the world-famous Frozen S’mores from Dominique Ansel Bakery, the S’mores (S$6.50) here is slightly different with a Dark Chocolate Ice Cream center and a cracker crumb core on the stick. There was some sort of crushed nuts layer separating the frozen ice cream from the outer layer of torched s’mores.

Well, the S’mores was actually decent and the ice cream stayed pretty frozen despite the torched outer layer. However, it did not come close to the real deal at Dominique Ansel Bakery; no, it did not wow us. 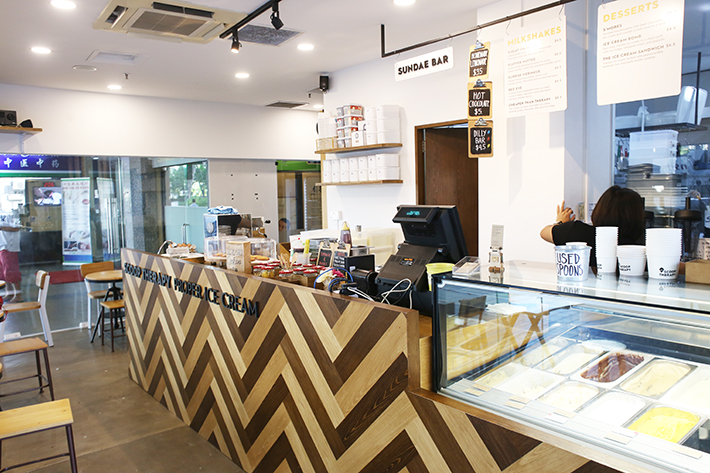 The Ice Cream Bomb (S$6.50) features two layers of choux puff sandwiching a generous scoop of Earl Grey Ice Cream. It is topped with fudge and supposedly popcorn (as said on the menu).

However, ours was topped with honeycomb instead and we were actually happy that it was done this way, as the sweet honeycomb paired really well with the fragrance of the tea-based ice cream.

Both desserts are great individual sizes and if you ever find yourself having dinner in the Katong vicinity, you can always pop by for some decent desserts here right after.

I was there today. I had waffle with 2 scoops of ice cream. I think the waffles were not freshly made as they lacked crispiness and they were not hote but lukewarm. The deal breaker for me was their refusal to serve me tap water. A very very greedy and shortsighted policy. Good ice cream bad customer service.