It is a never-ending debate on which donut chain is better, and we have our thoughts and favourites too.

Donuts are snacks that we’ve had since we were kids, and regardless of variation, we are always up for a good donut.

So which is the best? There are three popular donut chains in Singapore that people always think of when they want a donut – Krispy Kreme, Dunkin’ Donuts and J.CO Donuts – and we have decided to compare them further. Here’s the ultimate donut showdown.

Meet the contenders – Krispy Kreme is an American chain started in 1937 in New Orleans and has since been one of the most celebrated donut chains in the world.

Dunkin’ Donuts is another huge American chain that has been one of the most popular choices everywhere they go.

Lastly, J.CO Donuts is an Indonesian Donut chain that was so well-received that they had a massive expansion in Asia.

For this experiment, we picked out 3 different types of donuts from each place. They are the classic choices of Original Glazed, Chocolate and Jam-filled. Here is what went down in our mini taste test. 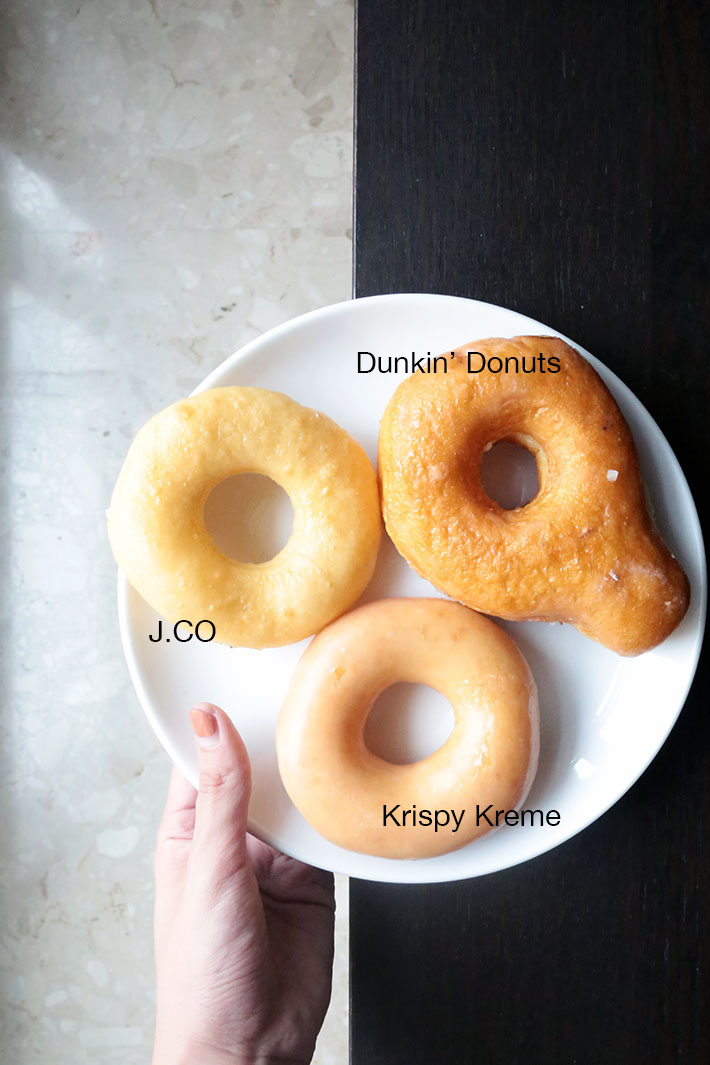 Krispy Kreme: The glaze was even all the way through, and was not overly sweet alongside a very slight hint of salt. Dough itself was fluffy. The high price tag of S$2.20 is probably its only downfall.

Dunkin’ Donuts: The original glazed donut was huge and extremely fluffy inside. The odd shape intrigued us but the letdown came when we bit into it. There wasn’t much taste going on here. Only consolation was the huge portion for S$1.80.

J.CO Donuts: This was probably the biggest letdown. Apart from being small, it was not fluffy at all. The glaze did nothing for us and it just looked like a floppy mess beside the other two. 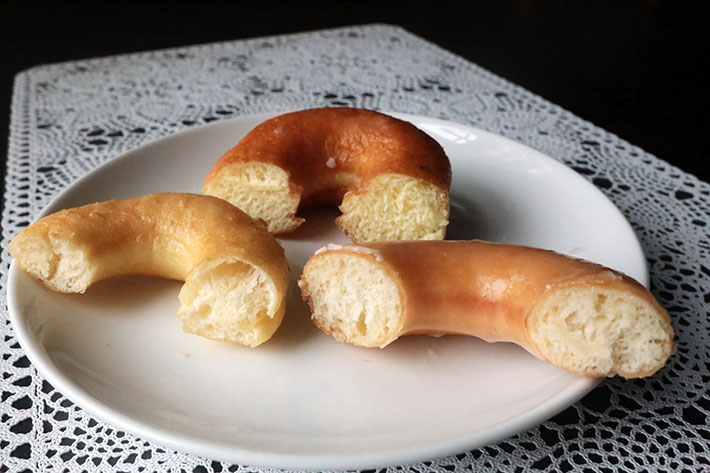 Our pick: Krispy Kreme wins hands down. We finally understand why their original glazed donut is such a hit. And it is definitely worth the high(er) price tag. Krispy Kreme: This is basically just milk chocolate over the original glazed donut. We really liked that the chocolate did not over power the tasty donut itself; if any, it enhanced the overall taste. Definitely one to eat again and again, and again.

Dunkin’ Donuts: We picked this double-chocolate one because the more the merrier, right? Totally not disappointed. Its only downfall is probably the donut itself. But since it is supposed to be a ‘cakier’ batter to pair with the intensity of the chocolate, we thought it worked as a decent alternative.

J.CO Donuts: Chocolate rice just doesn’t work as well as just smooth, creamy chocolate. But honestly, we were pretty surprised that this donut was actually rather delicious. The donut still wasn’t that fantastic, but the chocolate itself was way too good that we were sold. Our pick: J.CO Donuts wins this round. The chocolate was spot-on and was almost too addictive. 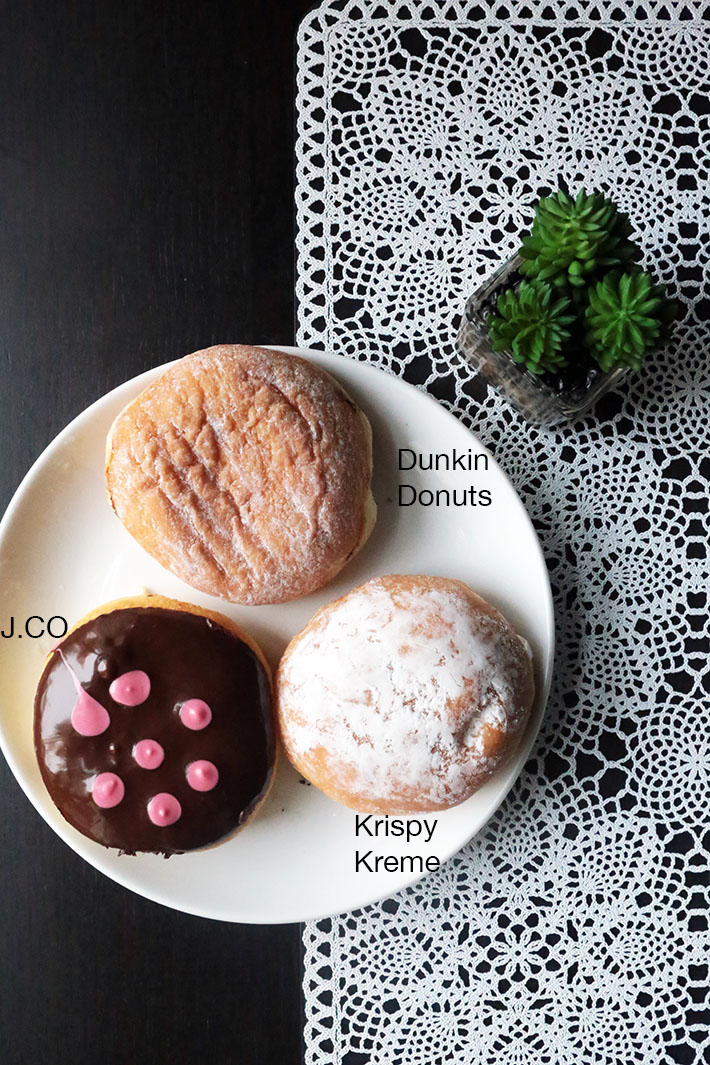 Krispy Kreme: Way too much icing sugar on top and it was almost impossible for us to not make a mess from having just a bite of this. Jam was mediocre and could be better.

Dunkin’ Donuts: The icing sugar did not overwhelm this time, and the jam was actually really tasty. Paired up with the fluffy donut, this classic match made in heaven sure is a splendid classic of Dunkin’ Donuts’ to love.

J.CO Donuts: The jam-filled one came with a slather of chocolate on top, and while those with a sweet tooth would appreciate this, we thought the richness was a tad too overwhelming. Pick one, J.CO! Either chocolate, or jam. Both don’t equate best of both worlds. 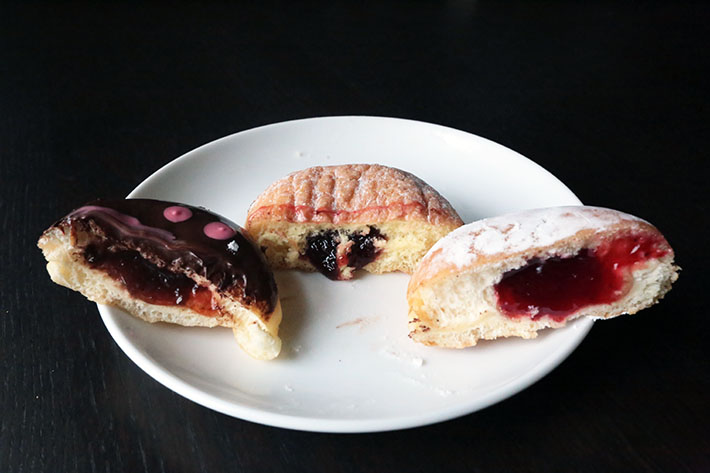 Our pick: Dunkin’ Donuts won us over. It was simple, and it didn’t try to be anything else.

Every donut chain has its star bakes, and the ones that fail terribly. But this is just our two cent’s worth, and whatever it is, we are still huge fans of donuts all the same. Be right back, gobbling up more donuts!

Actually, I like donut from Mister Donut! How I wish it’s sold here in Singapore.