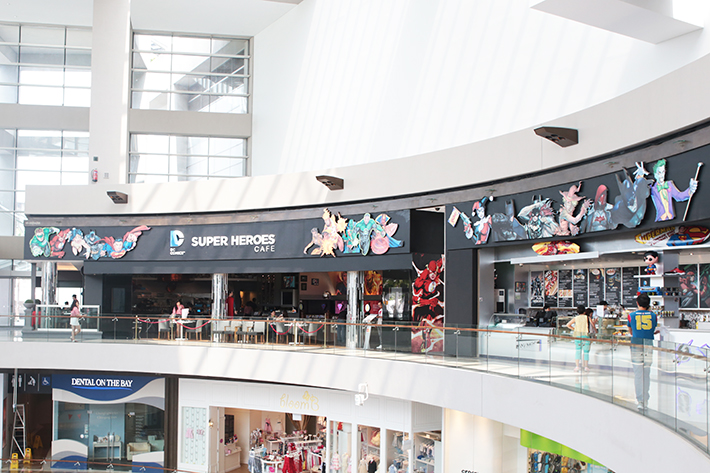 It is here – Singapore’s first DC Comics Super Heroes Cafe, and it is massive. Walking towards this huge cafe is like unveiling a pot of gold – we were amazed, not just by its gargantuan size, but by all the superhero murals and life-sized figurines.

Any fan of DC’s superheroes will be flocking here very soon and we foresee that this cafe will get even more crowded during the weekends and peak hours. The DC Cafe has a dedicated takeaway counter with a mini seating area just for cakes, snacks and drinks, and another bigger space for savoury food.

We cannot deny that we were fan girl-ing HARD. After admiring Batman and his Batmobile, we took a pick at their pretty desserts – colourful cakes, embossed fondant cupcakes and quirky-named drinks, just to name a few. 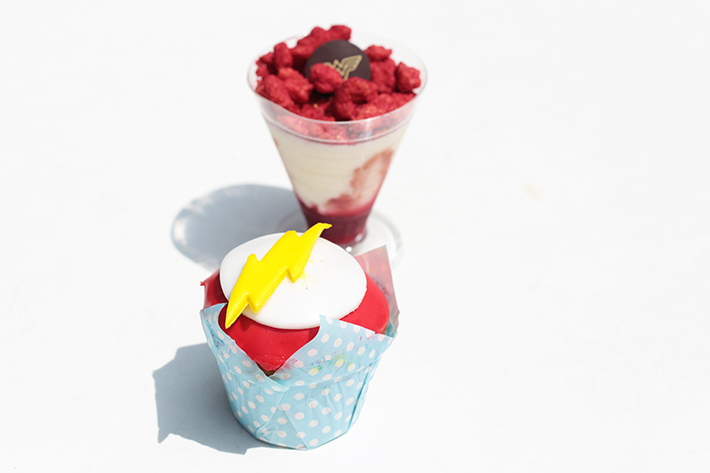 We settled for a cupcake, a mini dessert and an iced tea. Being an avid fan of The Flash, our eyes were drawn to this beautifully made fondant blueberry cupcake (S$8.90). To be honest, the price took us aback quite a bit, but it was so worth it. Who doesn’t like The Flash?

Moving on, we had a taste of the Raspberry with Lychee Mousse (S$8.90) which came with a mini embossed Wonder Woman logo. Apart from the gimmicky chocolate on top, we preferred the taste of this over the cupcake.

The mousse was light and airy, far from being overly dense. The raspberry added a touch of acidity and tartness, which we enjoyed thoroughly. Although we were satisfied with the fun-looking desserts, we were certainly let down by the expensive iced tea. For almost S$7 a cup, we were served a generic cup of iced tea that had completely no wow factor. A word of advice – stick to the desserts. 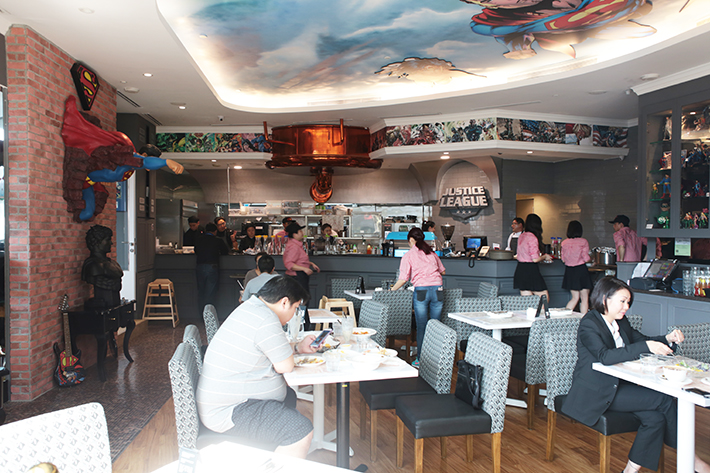 If you are a huge fan of superheroes like us, it is still a must to visit this cafe to experience DC in its full glory.

Is it halal? I would love to go thr!

I have my dinner on their first day opening. I must say there’s gonna be good and bad for few days or weeks. But to be honest, they did a very very great service. And yes the price surprised me for a start. But it was a reasonable price. Portion is quite big. The drinks, (the dynamic duo’s double choc craack!), is sweet, but nice. They even ask some customers bout the food. All I can say is 9/10 for the food, drinks and staff. I was full to even have a dessert. I will be back for more.

What merchandise do they have there?

Is the food halal ?

Is It Halal?
What Time Does It Open?

I find them rather inflexible as I went there with my hubby and baby girl for hubby’s bday on a weekday. There were no crowd and queue so I requested for a sofa seat corner. The manager in charge insisted that the sofa seat is for 5 seater and pointed to a more crampy corner for us. We told them its ok and was disappointed with their inflexibility.

i was there with friends recently and because other eateries were on Q so we have no choice but to dine at super heroes cafe.
Our first impression of the cafe design was ok but lack off excitement since it is suppose to be a. DC comics cafe.
The menu was limited other than the beverage and dessert list was extensive and expensive.
We have ordered. Chicken, pasta, burger but with a well known Chef as the owner can’t tell my grandmother how good it was. Portion was ok, taste was not as expected since it is open by a famous celebrity chef and presentation couldn’t match that of a DC Cafe and price wise don’t what we have served is definitely not worth.
Service needs to be improved and no excuses for being new.
Verdict: I think if the owner wants to ensure that their investment can last for at least a year. They better do something to the cafe especially the menu. I will not recommend this place as a place to dine at MBS . I shall score 4 out of 10.