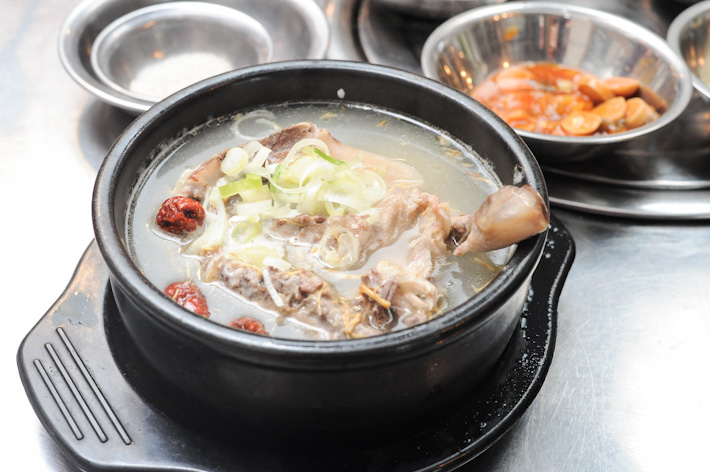 Samgyetang means Ginseng Chicken Soup and it is one of the most well-loved delicacies to have in South Korea. A warm bowl of Samgyetang is especially comforting in cold weather, and it warms your heart up instantly. If you are planning to visit Seoul soon and haven’t tried Samgyetang, this is a definitely must-try!

So what exactly is Samgyetang? It is essentially a whole chicken (young chicken is most commonly used) stuffed with garlic and rice, then served in a rich broth that is boiled for hours with ginseng, red dates and other spices, and finally topped off with scallions.

A bowl of this delicious Ginseng Chicken Soup is often accompanied by various Korean side dishes such as pickled vegetables and fermented seafood. Typically, one bowl of Samgyetang is good for one person, or if the chicken is bigger, sharing between two is encouraged. 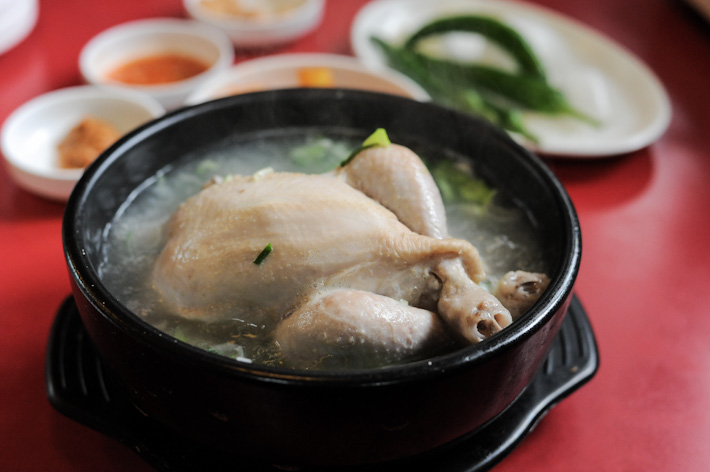 Although the idea of drinking this in winter to combat the cold sounds nothing short of perfect, Samgyetang is actually most commonly consumed on a hot summer day. It is believed that having Samgyetang during very specific periods of the Korean lunar calendar can be a boost to your overall health.

If you are having this dish in a restaurant, you will see that it is oftentimes accompanied by a bottle of ginseng wine or insamju. This bottle is usually given free-of-charge, with every order of a bowl of Samyetang.

There are many variations of this dish and ginseng soup is also commonly found in traditional Chinese recipes, where it is also believed to treat illnesses and improve one’s health. With so many vast benefits of having Samgyetang, what are you waiting for? We say book a flight to South Korea just for this wonderful dish!

Hi Cheryl, do you remember which restaurant best known for making samgyetang?