When visitors go to Japan, Tokyo is often the top of the list. In fact, majority of the most-visited destinations in the country are in the capital. Osaka, in comparison, is often neglected and it is a shame because there are so many things to see and do there.

For those of you who don’t know, Osaka is known as the food kitchen of Japan. From michelin starred restaurants, new dining concepts and delicious cheap eats, Osaka is a haven for food lovers. When visiting the city, you cannot leave without eating the top 3 street food that originated from Osaka – Kushikatsu, Takoyaki and Okonomiyaki. 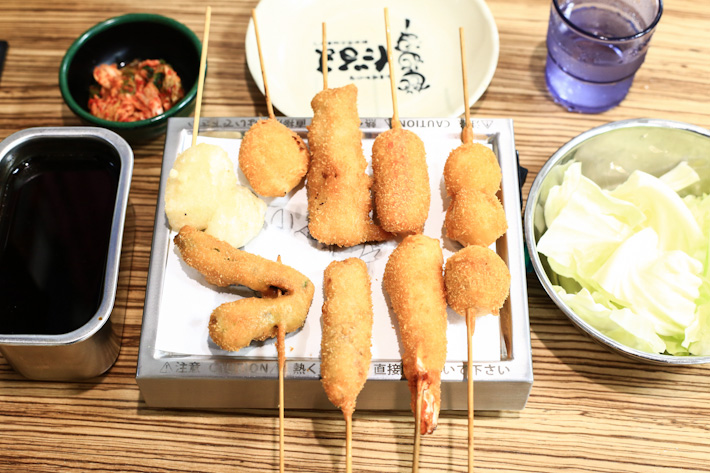 KUSHIKATSU – DELICIOUS ON A STICK

Kushikatsu is famous in Osaka and is known to be one of the identities of that city’s food scene. Also known as kushiage, kushikatsu is deep-fried meat/vegetable skewers. This is heaven on a stick. Every skewer is coated with light batter and deep-fried to something even lovelier than golden brown; it is delicious and not greasy at all.

A typical outlet is usually simple and fuss-free, and usually nothing else but skewers and drinks. You have your chicken and beef, vegetables like brinjal and capsicums, eggs and mushrooms… and the list goes on. 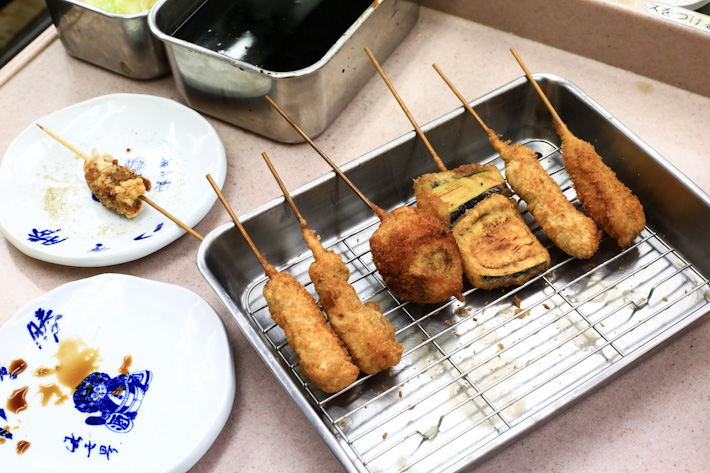 Shinsekai, an old neighbourhood famous for Tsutenkaku Tower and cheap eating spots, is where time seems to stop in the 1960s. There are over 60 restaurants that specialise in kushikatsu in the area, but make sure you go to Yaekatsu (3-4-13 Ebisu-higashi, Naniwa-ku). The long queues outside the restaurant are the best testament to Yaekatsu’s popularity. Most people are probably familiar with Takoyaki, since it is now widely available in many cities around the globe. However, not everyone knows that takoyaki actually originated from Osaka.

Takoyaki, also known as octopus ball, is a ball-shaped Japanese street food. It is made of a wheat flour based batter that is filled with diced octopus, pickled ginger, and green onion. Topped with dried bonito, and a douse of mayonnaise and takoyaki sauce, this popular street snack is cheap and delicious. 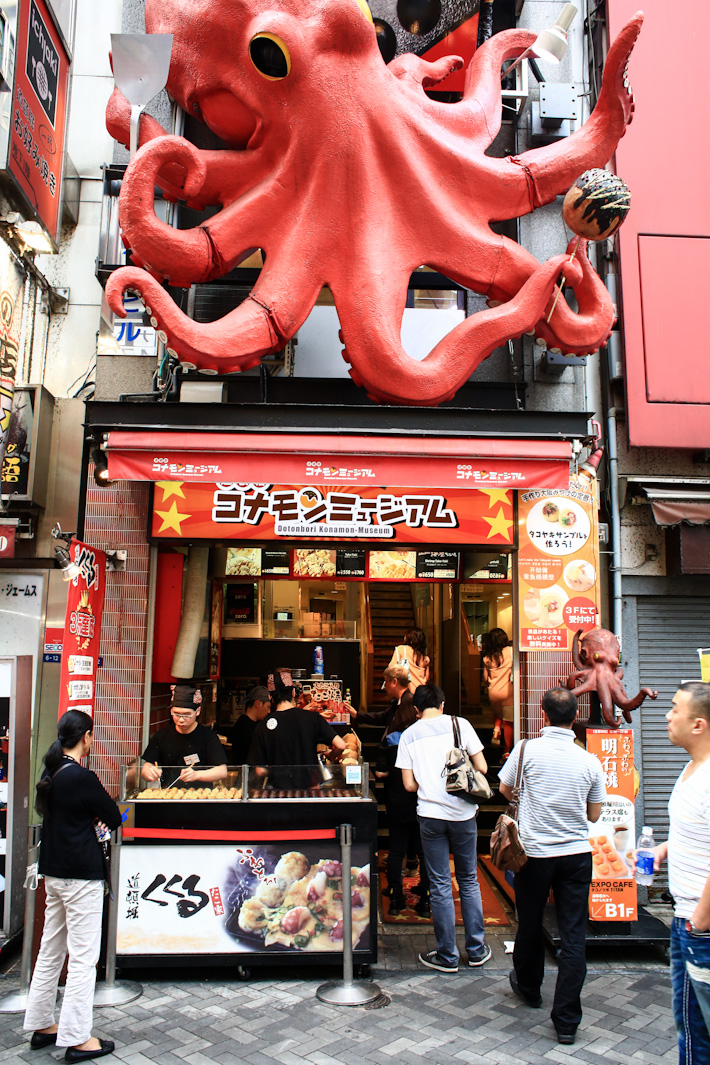 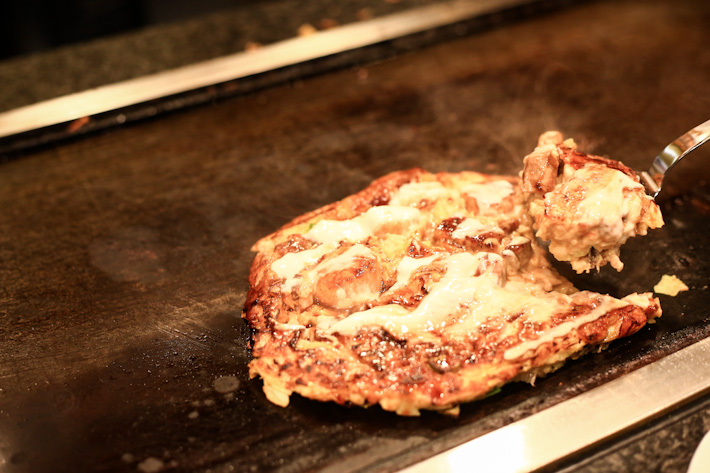 OKONOMIYAKI – A STAPLE AND MUST-TRY IN OSAKA

For the uninitiated, Okonomiyaki is a savoury Japanese pancake that originated from Osaka. It is not the most photogenic food, but trust me, it is something that you do not want to miss when you are here. 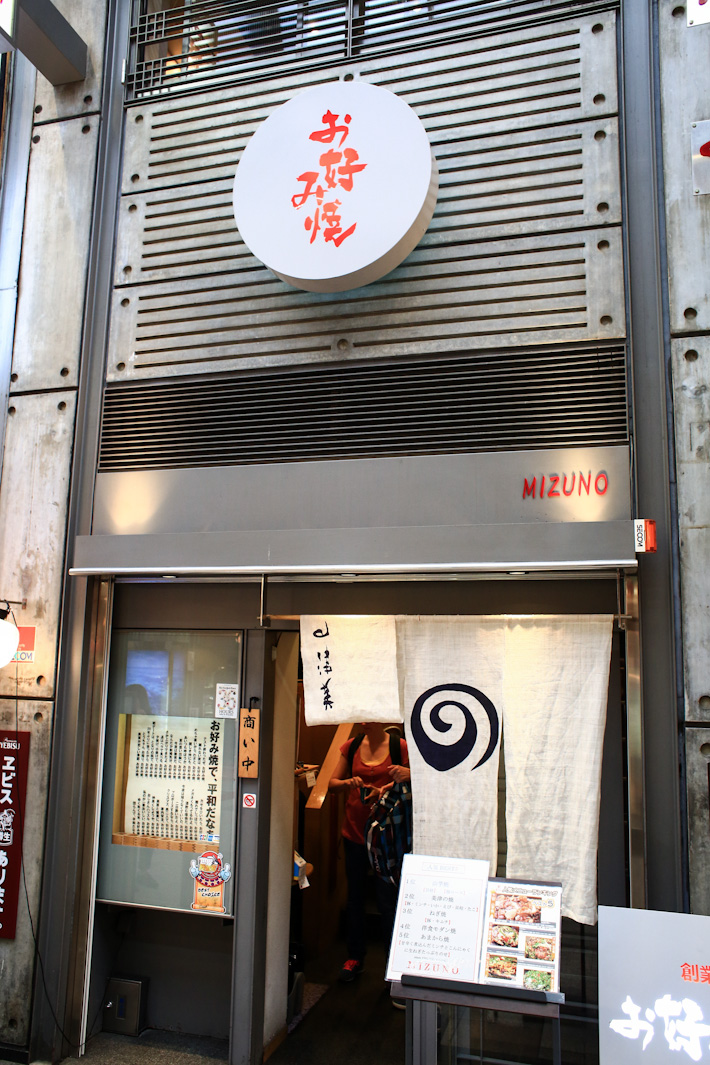 Mizuno (1-4-15 Dotombori, Chuo-ku Tel: +81 6-6212-6360) is an institution in Osaka. It is famous for serving one of the okonomiyaki in Osaka, and it dishes our a variety of pancakes to hungry patrons throughout the day. Among the options on its menu, the best-seller is its yam flour okonomiyaki with scallops and roast pork. Go during off-peak hours, or be prepared to wait in line. However, Mizuno mainly caters to tourists nowadays, and you probably won’t find locals queueing up just to eat okonomiyaki. For an authentic okonomiyaki, head to Houzenji San Pei (1-7-10 Dotonbori, Chuo-ku, Osaka Tel: +81 6 6211 0399). Located on Hozenji Yokocho, an elusive lane near the Hozen-ji which has numerous restaurants and eateries, Houzenji San Pei is where locals go for their okonomiyaki fix.

Thank you for this! I’m half Japanese and with my mother originating from Kansai I am always telling people to go to Osaka instead of Tokyo, especially if you LOVE food! All the above mentioned street food is so unbelievably scrumptious as well, my mouth is watering just thinking about some takoyaki…good thing I only have another 6 months before I make a visit back! Great post! xx

Some great recommendations in this list. Mizuno is excellent.

I will definitely try these three! Thanks for sharing as always.
Love,