Lyon is a city in east-central France in the Rhône-Alpes region, situated between Paris and Marseille. Many guys have heard of Lyon because of the football team Olympique Lyonnais’s involvement in European football championships.

For food lovers, Lyon is known for a different reason. Widely acknowledged as the food capital of the world, it is a place that one must visit at least once in his/her life.

I am glad that I chose to go to Lyon. While it was a shame that we could not stay longer (we were there for only three days), we got to see the beautiful city, and eat at a bouchon. Below is a short summary of what we did during our stay. Do note that it is not meant to be a complete travel guide to Lyon.

Getting to the city from the airport is relatively easy. The Rhônexpress (€13 for a single journey, €23 for a return) connects to the city – at the main Lyon Part-Dieu station, and metro at Vaulx-en-Velin La Soie. The journey to the connecting station was around 30 minutes, and it took us another 20 minutes to take the metro to the city. What I love about Lyon is the city centre is not so big and most attractions can be reached from each other on foot. You can start from Place Bellecour (Metro: Bellecour), and walk up to Place des Terreaux (Metro: Hotel de Ville). There are plenty of shops and restaurants in the area. The main downtown shopping spots – Rue du Président Edouard Herriot and Rue de la République – are where you can find the famous luxury brands.

After exploring the city centre, we tried to find a bouchon for dinner, but to my dismay, all of them were fully booked for the next four days because it was the Festival of Lights. After knocking on the doors of eight bouchons, I managed to “beg” for a table at Cafe des Federations (I will share the experience in another post) for dinner on the next night.

After completing the mission of getting a table in a bouchon, we had our first meal at Brasserie Léon de Lyon (1, Rue Pléney +33 04 7210 1112) – one of the well-known restaurants in town. We shared a number of items, and everything was pretty decent. 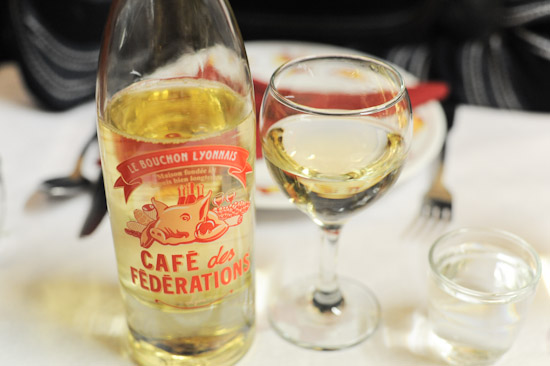 I did some research on the best Bouchons in Lyon, so if you ever find yourself in the city, you must go to at least one of the following:

Most of the famous Bouchons are also located within this area, but they are all hidden within alleys so you need to know the name and address in order to find them. It is very easy to walk by without noticing them by the side. 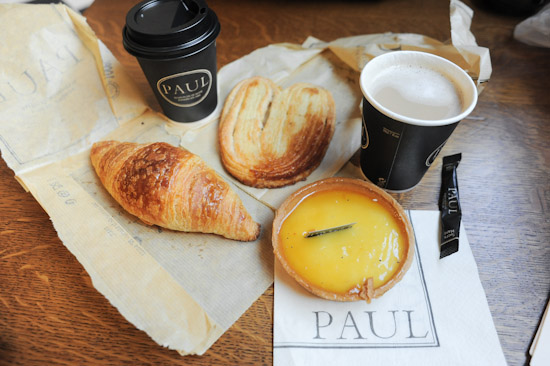 All in all, day 1 in Lyon was not great. We were caught in a rain, we did not know where to go; it was a little disappointing. But luckily, day 2 changed everything.

We started with breakfast at Paul – tarte au citron, palmier, croissant, and a cup of coffee. The farmers market along the Saône – one of the two main rivers in Lyon – was next. It was fascinating to visit the market and look at all the fresh produce. 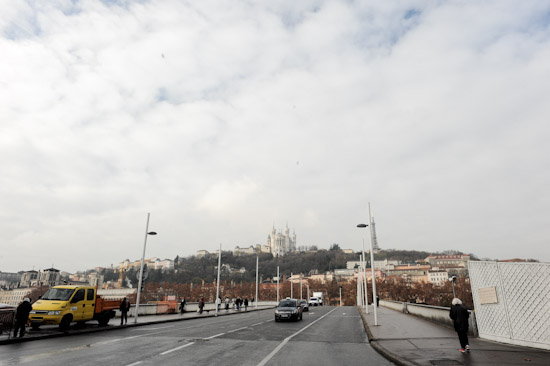 After that, we went to Vieux Lyon (also known as Old Lyon) which is the Renaissance area along the other bank of the Saône. In fact, it is one of the largest Renaissance area in Europe after Venice. 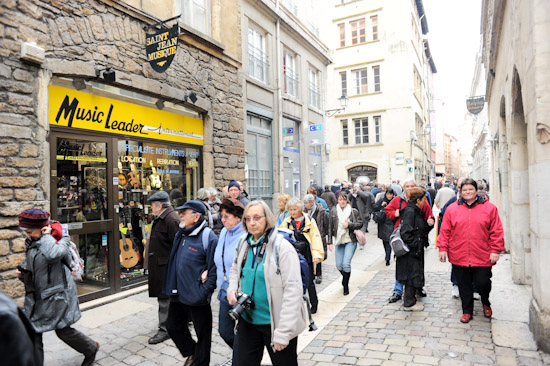 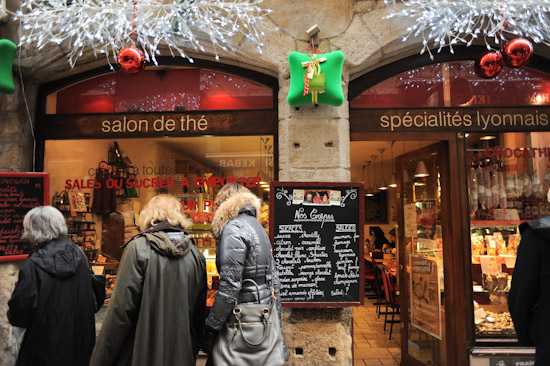 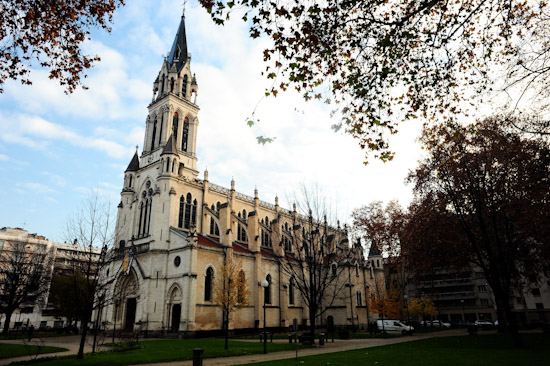 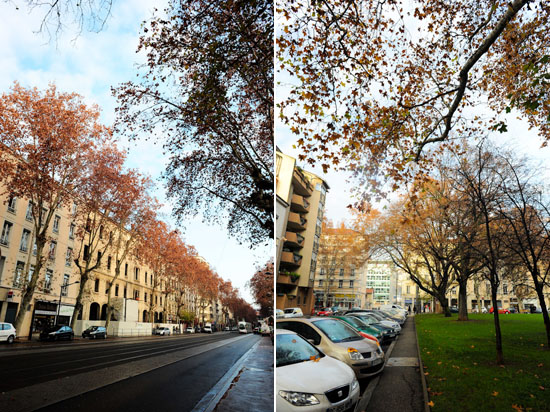 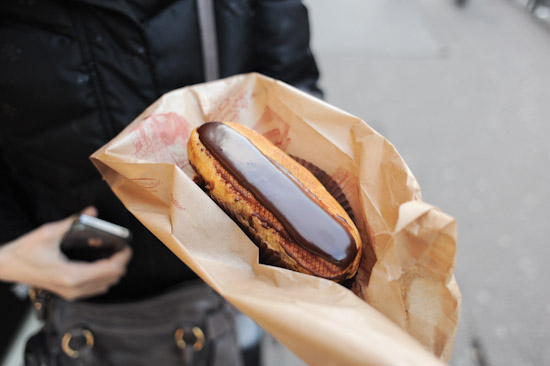 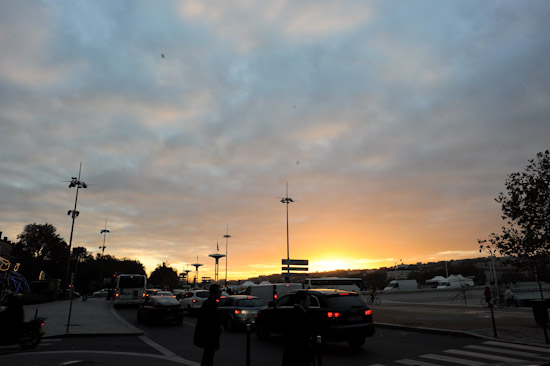 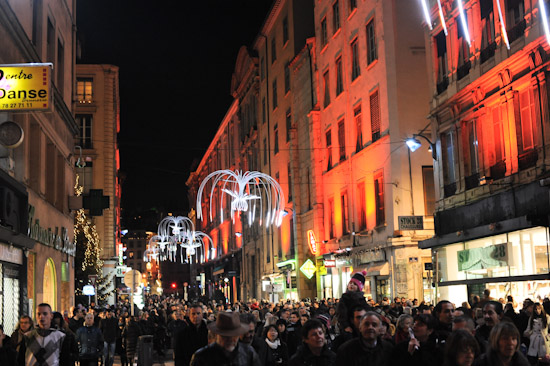 We happened to be in Lyon during the Festival of Light; a four day festival during which the people of Lyon place little candle lamps in their windows in honour of the Virgin Mary.

The Festival of Light is one of the most important festivals in Lyon – people from all over the world fly in just for this occasion.

It was an amazing experience. Everyone came out to play and the lighting displays were quite a sight to behold.

The next day, we packed our bags and said good bye to this beautiful city.

Many people have asked me about the difference between Lyon and Paris. Both cities are very beautiful, but Lyon is quite different from Paris. The layout of the city somehow makes it feel less congested. People here are friendlier, and although there are plenty of visitors, most of the attractions do not feel touristy.

Having said that, Paris will always be my favourite city in the world (other than Singapore). It has that magical feel which you cannot find elsewhere. But if you are planning to explore France, I will definitely suggest making a trip to Lyon. It is not called the food capital of the world for nothing. The food, in general, is very good. And having a meal in a bouchon is one of the things on the bucket list.

Lyon is an adventure that I will never forget. 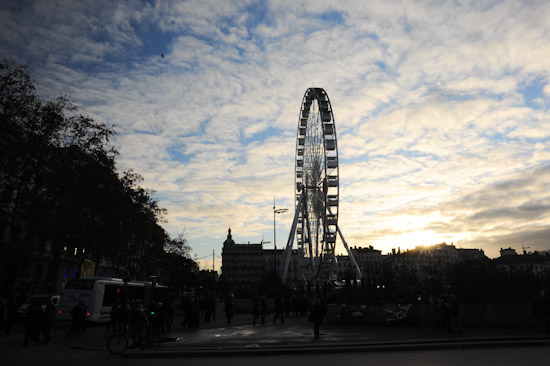 Love the pictures! I’m going to Lyon in July, did you manage to visit the famous Halles de Lyon/Paul Bocuse?

Ahh, you make me want to plan my next trip to Lyon!

Hi, i’ve been following your blog on/off for quite sometime. It’s great whenever i want to get recommendation where to eat, you have visited lots of places that i’ve never even heard of! Keep up the good work!

What great photos you took! I especially like the cover photo, the colour of the goods in the market so vivid! Did you do adjustment post-photo taking?

@Bichonx Hello you are too kind. Yes I usually do some colour/contrast adjustments in lightroom/photoshop. Lyon is a beautiful city, I didn’t have to edit much for most of the photos.

Hi, I’m living at Lyon over 3 years. There r a lot of thing to visiting and I live at the center of Lyon. I really falling in love with this city. Chez hugon is The bouchon restaurant that I always go. and every Friday saturday and Sunday ,there is fresh market in the morning until 1 pm at Saone river and rhone river side. And ever Sunday , there is old book market at Saone river side. I’m proud with my city.

Wonderful eye catching clicks. Every click describing their identity by their own. Lyon is such a beautiful city, full of traditional colors.

Thank you for this article about my city

I arrived a few month ago in Singapore and started reading your blog for food advice. I’m glad you appreciate your journey in Lyon.

Lyon is my favorite city in France! I moved to live here 2 years ago. I love France and its cuisine. Foodlovers know what I mean. Greets!