Pu Tien Restaurant has been quite impressive in the Singapore Food scene. They have expanded from their original branch at Kitchener road to five other outlets within a couple of years. The other Pu Tien restaurants are strategically located in popular shopping malls like Marina Square, Tampines Mall, VivoCity, Jurong Point, and there’s even a Pu Tien Buffet restaurant at City Square Mall.

I have been wanting to drop by Pu Tien restaurant for dinner ever since I heard that they are a very affordable place for a good Chinese dinner. When I eat out with my friends, we tend to stick with Western food, or check out other cuisines. like the usual Japanese, Italian or French food.

I’m not sure if it’s the same case for you, with the exception of Dim Sum, I usually only have Chinese food and zichar dinner with my family, but not my friends. All this is about to change with our dinner at Pu Tien Restaurant.

Why don’t we have the Deep Fried Duck with Yam ($15)? One of my friends suggested.

It was a good choice. Held within the shattering crisp of the yam, was the most incredibly moist and welcoming duck meat. It’s a brilliant idea to coat a layer of yam around the duck. 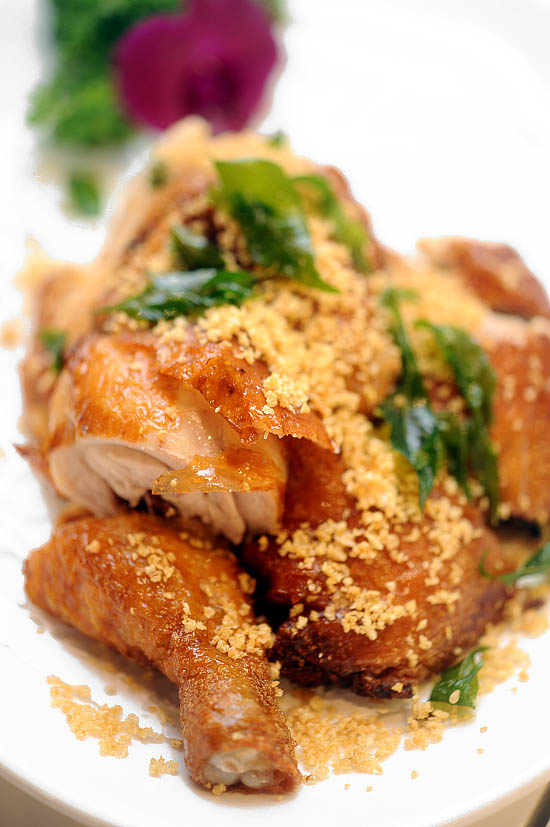 The Deep Fried Chicken with Garlic ($12 for half chix) was golden and crispy to the tooth, with the meat retaining the moisture and sweetness even though it was deep-fried. The portion was a little small though. 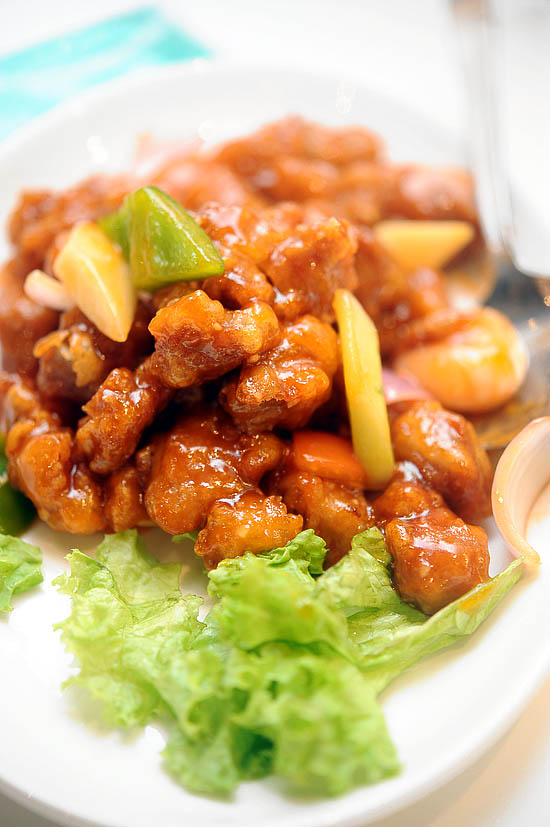 “Brad, you need to check out Pu Tien restaurant soon. They have one of the best sweet and sour pork in Singapore!”

Ever since then, I have been waiting from the start of forever to go Pu Tien restaurant just for their sweet & sour pork. I could hear the drum-roll when I stretched out to grab a piece of the pork. It smelt good, and there’s lychee too! Emotions took over as I ignored my friends and concentrated on what’s supposedly the ‘best sweet & sour pork’

I wasn’t sure if it’s because I had too much expectations of it, but Pu Tien’s Sweet & Sour Pork ($10 for S, $15 for M) wasn’t what I was looking for. It was not bad, slightly better than most of the sweet & sour pork that I’ve had before, but it was definitely not the best. 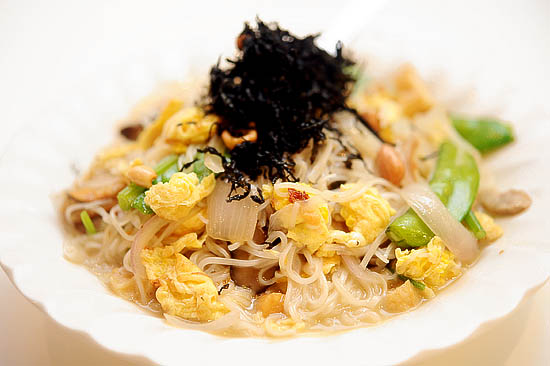 Half mee sua, half bee hoon, apparently Pu Tien restaurant’s Fried noodle mee sua ($6) had an identity crisis. We were left wondering about a few possibilities: a) we ordered bee hoon instead of mee sua, b) the waitress took down a wrong order and got us the bee hoon instead, and c) the mee sua was supposed to taste like bee hoon. Not that it mattered actually. We enjoyed the moist and wet mee sua that came with a good mixture of ingredients 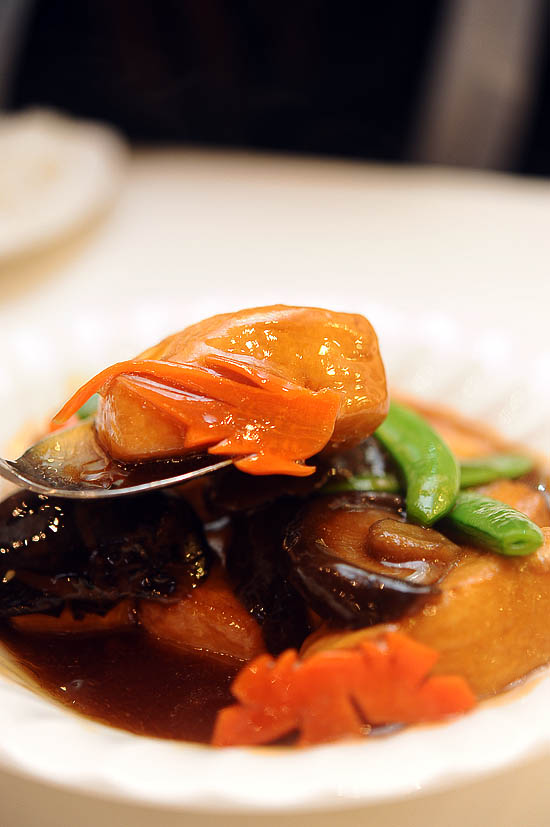 Pu Tien restaurant is a good place for families. The prices are slightly higher than what you’d pay for zichar, but it is still very affordable for a meal in a restaurant. If you are looking for a Chinese restaurant for a simple family dinner, Pu Tien restaurant may be just the one.

All those dishes you mentioned were really good, and dont forget the bitter gourd on ice, deep fried pei tan (century egg). There were also so many other dishes, that were really good. We had in total about 15 to 16 different dishes and all were excellent!

Putien is one of my favourite restaurants. My family loves their lor mee, sweet and sour lychee pork and braised rolled pig intestines (this is a very unique appetiser!).

But that post was written a long, long time ago; I’m not sure if the first dish is still available..?

aiyo why din u have the cockles hehe

One of my favourite chinese restaurants to go to.

so.. where are your top sweet and sour places so far

ive been VERY tempted to try it! the original one at kitchener road. mmm.

The deep fried duck with yam sure looks good!

Ah I didn’t know they have so many branches already! The first picture did it for me LOL. I’m bringing my mum to Pu Tien next, she loves Chinese food heh.

SAHM: Did i read bitter gourd on ice? I love bitter gourd, but how did they do it on ice?

xy: i didn’t remember seeing the lor mee, but the braised pig intestine sounds really interesting! the sweet and sour pork can be better though

cleartear: they have a cockle dish too? how was it done?

Ju: yea i have to agree on that, affordable and now that they have so many branches in singapore, it’s really convenient for us to have dinner there

mr lee: I have yet to find one, do u have any recommendations for me? : )

min: I think you should go to the kitchener road one, that’s their original branch and it should be the best? but i am too lazy to go all the way there

danghl: haha you din know?!? now you know! lol let me know which dishes u try

Min, i only went to the original kitchener road one, did not try other branch. Very good service!

brad, its steam with lots of garlic and chinese wine and chilly, super goooood.

i just went there with my mum too! (: I love the food! Love the deep fried yam with duck. Would definitely go back again at the end of the year when im back!

cleartear: haha i think the original one should still be the best! i am going there next time

lianne: hehe when are u leaving or have u left already? come home soon : )

*drools at ur food photography again* damn…. do u need assistant? =p

how much is the buffet?

Do u know why the fried mee swa tastes like beehoon? It’s because they have to deep fry the meeswa before “stir-frying” it with other ingredients!That’s why the texture is somehow similar.

And also, there are alot of types of meeswa. Like amoy and hokkien mee swa. There’s really a whole lot of knowledge regarding mee swa!

thomas: Not very sure abt the price, why don’t u give them a call?

b: really? i didn’t know that!! thanks for the info. ya man i din know there’s so much knowledge about mee sua :p

Everything we ordered turned out superb: Lor Mee, Hingwa Bee Hoon, Fried Pork Knuckle, Tofu soup, Egg plant with pork floss. The last one – gosh, even my son who doesn’t like vege can’t have enuf of the dish!!!