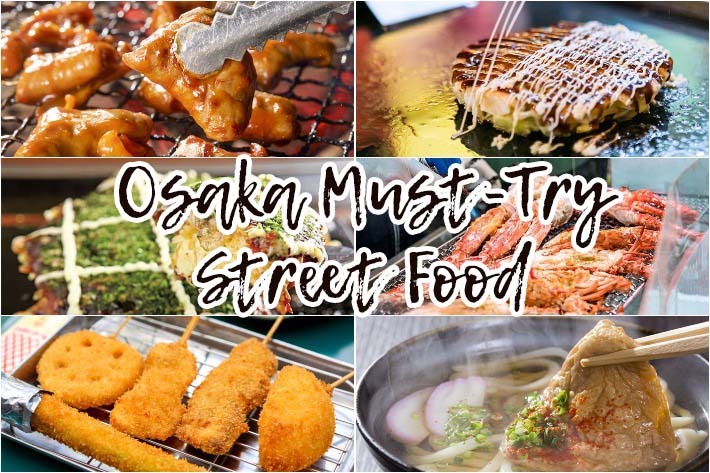 If travelling to Japan is on your bucket list, one of the toughest questions you might first face is, “which city?” and you’ll want to consider Osaka as long as you’re guided by your tummy.

This city is tenka no daidokoro, which is its affectionate national nickname as “the kitchen of Japan” where epicures make a gastronomic pilgrimage. Kuidaore, which means to eat yourself into bankruptcy, is huge in Osaka’s history and culture.

If you’re looking for the best places for nosh without breaking the bank though, we recommend starting on the streets and Dotonbori in the Namba district is one of the principal destinations for this. It might feel like food is shouting at you from the teeming street vendors with their myriad of treats. If you’re excited to eat your way through this culinary paradise, we’ve gathered 8 soul foods that originated in Osaka for you to keep an eye out for. 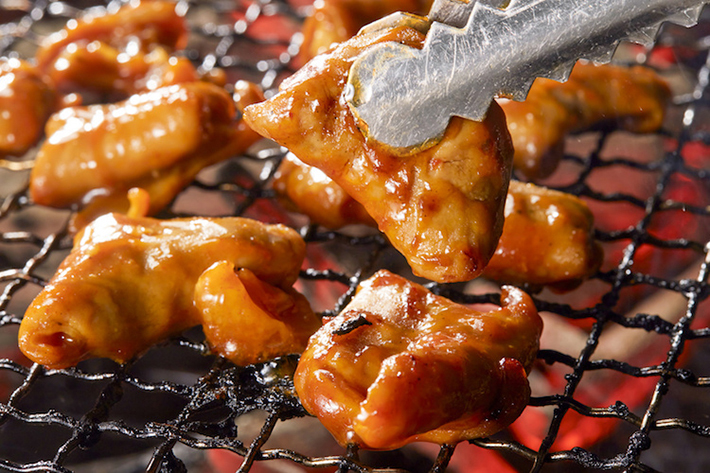 You might have heard of yakiniku (grilled meat) which, although is very strictly Korean in origin, is said to be brought to Japan by a Korean living in Osaka. While yakiniku typically uses high-grade meat, horumonyaki uses pork and beef offal or innards.

It’s a typical option on the menus of most yakiniku and izakaya joints in Osaka so prepare yourselves to find animal parts you might never have expected to eat. Kani is crab in Japanese and you should get grilled kani as well as kani miso. You’ll find crab legs cooked over charcoal which gives its sweet flesh a smoky aroma. Kani miso is usually served in a crab shell and it’s miso made from crab roe and its internal organs.

If you’re walking along Dotonbori, you’ll likely chance upon a huge mechanical crab hanging on the walls of one of the buildings. That’s where you’ll find Kani Doraku Dotombori Honten, which is a seafood shop that specialises in crustaceans. It’s highly recommended that you try kani there. 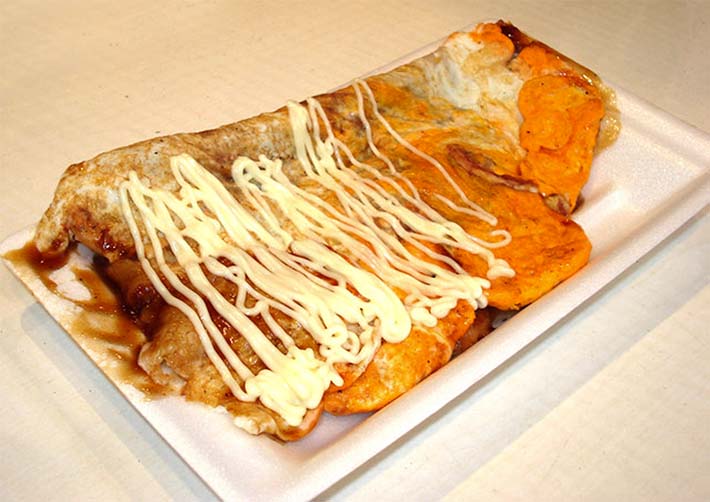 Ikayaki refers to a whole baked or grilled squid in Japan. In Osaka though, it usually refers to a ”squid pancake” which is their regional style specialty. It’s like a folded crepe with a mixture of chopped squid and batter between two iron plates. Sometimes, it also has eggs.

It’s pretty similar to okonomiyaki because it’s can be topped with rich Worcestershire sauce and mayonnaise. It only takes a minute to cook which makes it a popular fast food to get. Kitsune udon is a standard udon with a piece of aburaage which is deep-fried tofu that’s simmered in a sweet sauce. Kitsune means “fox” and its significance to Japan lies in Shintoism which is Japan’s major religion. The name of this dish is derived from the saying “the fox loves deep-fried tofu”.

You can eat kitsune udon anywhere in Japan these days but its origins are rooted in Osaka. Recipes vary from place to place but the Osaka-style broth is gentle and delicate from kombu (dried kelp) and dashi (Japanese stock), giving it more balance compared to the rich flavours of most of the other foods Osaka is famed for. 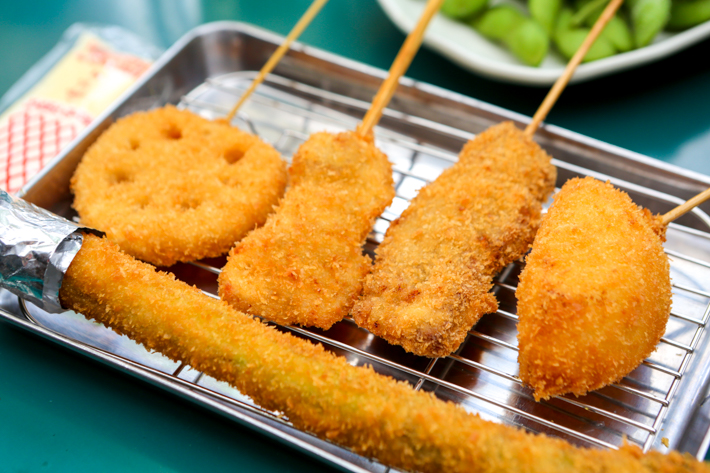 Kushikatsu is also known as kushiage which are deep-fried skewers of meat and vegetables coated with flaky bread crumbs. There’s everything from sticks of pork and seafood to shiitake mushrooms, quail eggs, and slices of lotus root.

As with the rest of the items on this list, portions, batter recipe, and ingredients differ in different parts of Japan. Look out for containers of dipping sauce which takes the flavour of your kushikatsu up a notch. What you absolutely must remember though is your manners. Don’t double dip! 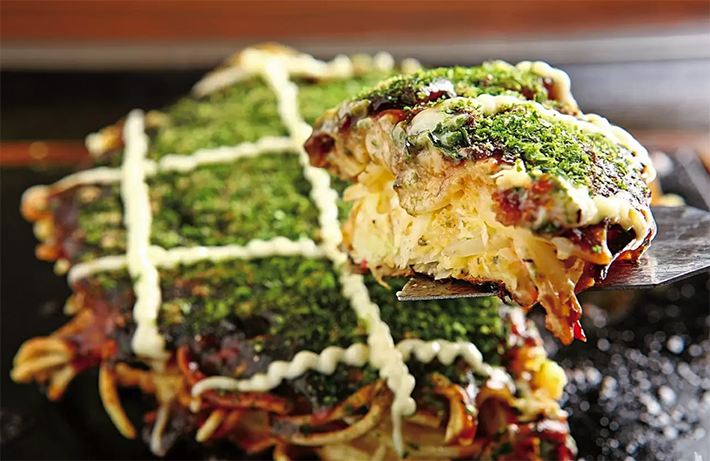 Negiyaki is a thin batter of flour that’s fried with liberal amounts of negi which are green onions like scallions or leek. It’s almost always described in comparison to okonomiyaki because they’re both savoury pancakes.

The main differences are that negiyaki is thinner and comes without cabbage. Sometimes, it’s stuffed with beef tendons too. It’s also eaten with soy sauce which gives it a healthier and lighter flavour.

Okonomi translates to “preference” and yaki translates to “grill”. So think of okonomiyaki, as a savoury cabbage pancake with ingredients you can choose with meats and seafood to even wasabi and cheese.

They’re usually served with a thick sweet sauce, bonito flakes, aonori (dried green seaweed) and, sometimes, a zigzag of mayonnaise. The batter, toppings, and sauces can vary greatly throughout Japan though. Osaka’s style typically has a batter made from yam, with shredded cabbage, green onions, and strips of pork belly. You can watch vendors pour dashi batter into a cast-iron plate of half-spherical moulds. They’ll add ingredients like tako (octopus) into its centre then roll it to form a ball as it cooks. Eat them hot off the griddle so they’re piping hot and creamy on the inside. It’s said they pair perfectly with cold beer, so you might spot them on izakaya (Japanese pubs) menus.