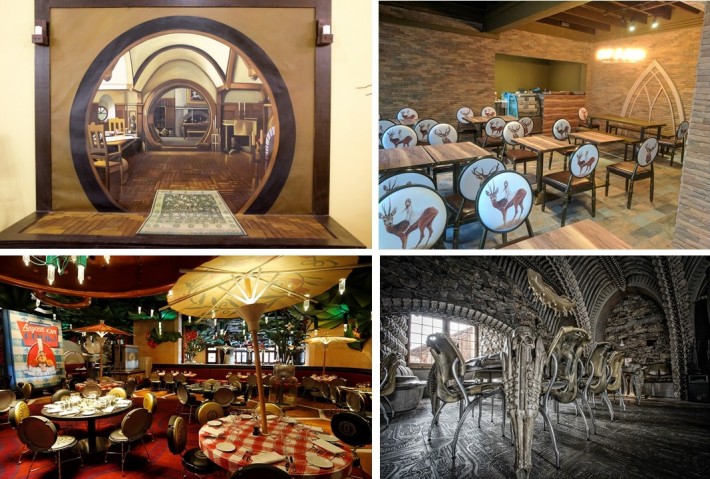 Have you ever been so obsessed with a particular TV show or movie ‘fandom’ that you just cannot get enough of it? Fawning over characters, story plots and the whole fictional universe of a show is nothing new.

Because this gets a lot of traffic and demand for merchandise and all things related, some people have decided to come up with themed cafes and restaurants to further entrance people into that particular world.

One of the most popular themes used is none other than Harry Potter and there are actually quite a number of Potter-themed F&B establishments worldwide centred around this iconic series. Other themes include popular American television series, cult movies and more – and we love them all.

If you are intrigued by all the crazy and cool themes that currently exists around the world, read on to discover the 17 Coolest Movie & TV Show-Themed Restaurants And Bars Around The World. 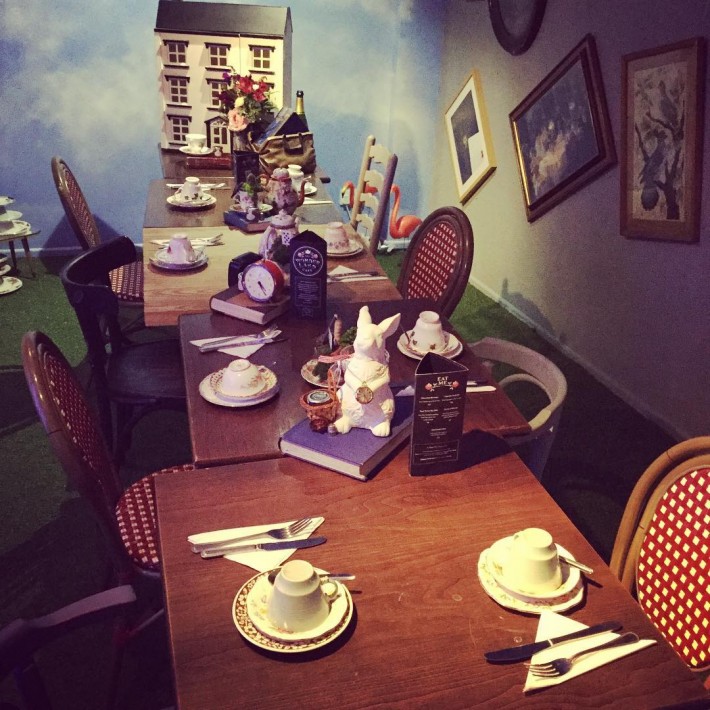 Fall through the rabbit hole and enter the world of fantasy at the Wonderland Cafe in Nottingham. Patrons would be in for an afternoon tea with a twist with its immersive magical decors and character mascots such as Alice and the Mad Hatter.

To match its realistic recreation of the all-time favourite novel, the cafe serves up wonderful delights such as Scones of Hearts and Toad Down the Hole that would leave you satisfied in no time. 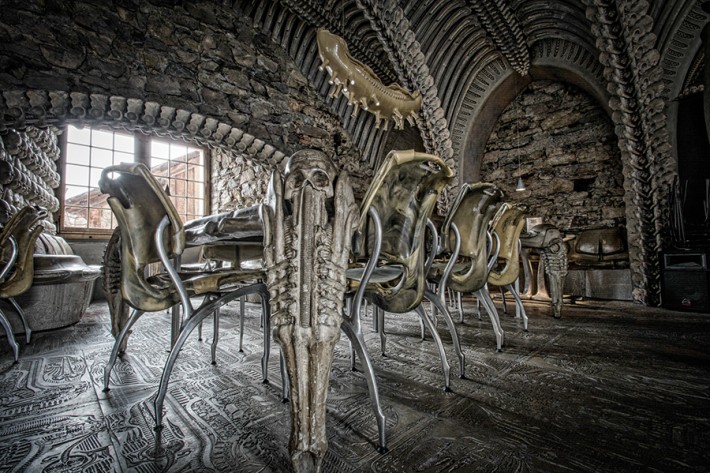 Beautiful in its own right, the Giger-Bar in Switzerland is a work of art with its intricate architecture that is rightfully inspired by Alien the movie. Its unique otherworldly atmosphere is created with a cavernous, skeletal structure covered by double arches of vertebrae.

Feel the embrace of an alien as you sip on their popular Alien coffee coupled with their sweet meringues for an out of this world experience. 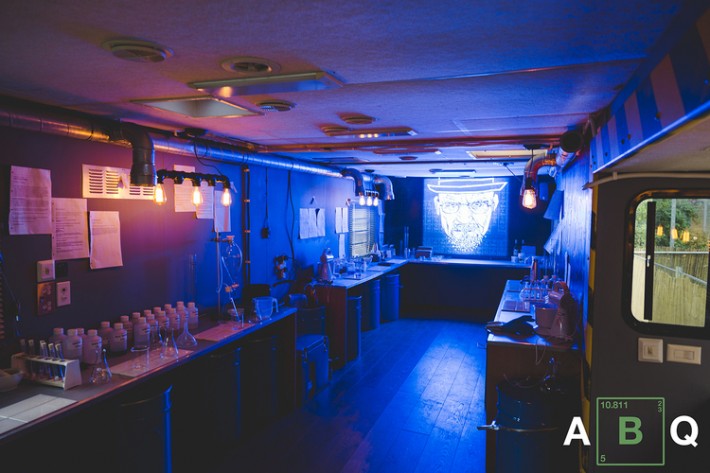 Whoever knew that chemistry could be so fun? Breaking Bad had created a large following for its unique narrative and its focus on science gone awry. ABQ in London aims to recreate the look and feel of the television series by renovating their interior to look like Walter White’s lab in the show.

To take things up a notch, the drinks comes in various unique concoctions that would definitely take you to a new high as you relive your favourite television moments. 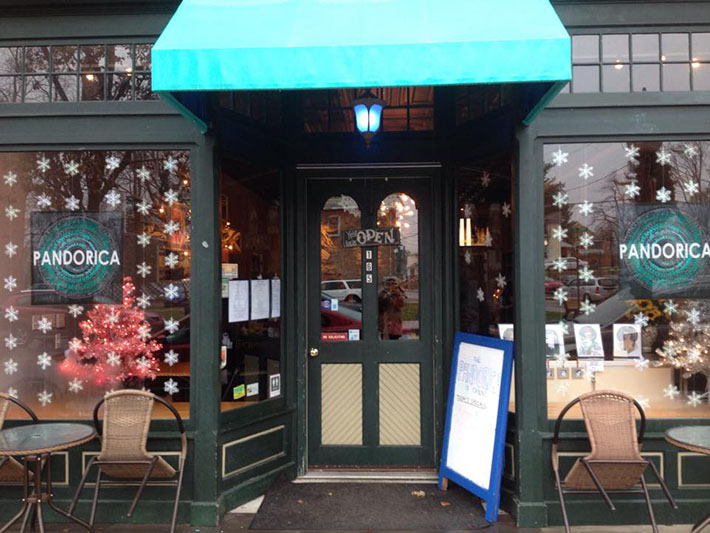 DOCTOR WHO – THE PANDORICA, NEW YORK

According to the Doctor Who universe, the Pandorica was a prison hidden under Stonehenge. It was built to hold the Doctor and ensure the safety of the Alliance.

Hence, what better way to celebrate the love of Doctor Who than to set up a cosy yet brilliant;y themed eatery with sandwiches, salads & British classics? All within the convenience of New York City.

This seafood restaurant chain has 43 outlets* worldwide 2015 and the whole theme of the restaurant are inspired by the 1994 hit movie – Forrest Gump, starring Tom Hanks.The dining style here is comforting and casual, serving all-American style seafood.

*Their headquarters is in Houston, Texas, United States 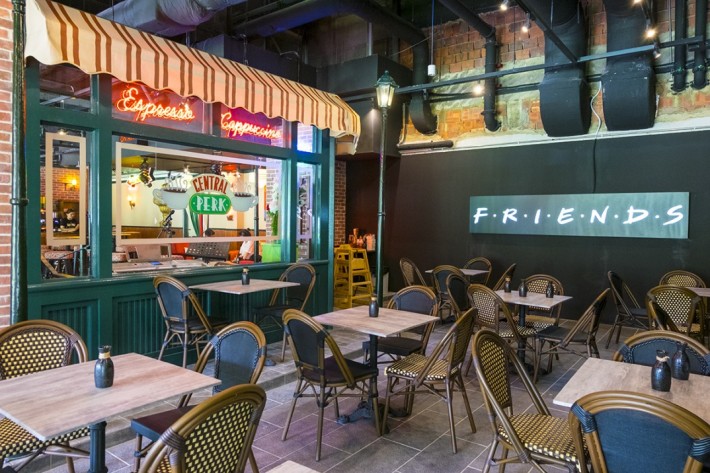 You now do not have to travel to Beijing to have a chance at dining at Central Perk as Singapore has opened their very own branch. The F.R.I.E.N.D.S-inspired cafe acts as a tribute to the widely popular television series and is aimed at spreading its addictive qualities to the younger crowd.

For those who are familiar with the show would be tickled by some of the menu items such as Ross & Rachel’s Breakup Pizza as well as Chandler’s Thanksgiving Chicken. 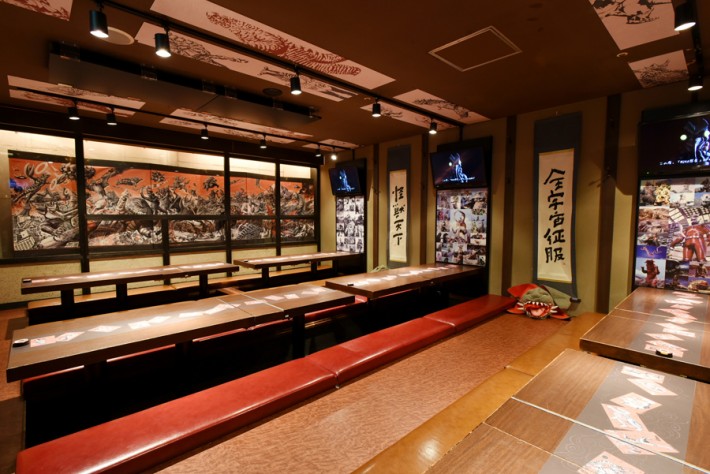 We have witnessed plenty of examples where cafes are designed and named after superheroes, but we often forget to honour the group of monsters that make these movies and series exciting. The Kaiju Sakaba, known as the Monster Pub, honours the creatures that are often on the losing side.

The recently refurbished restaurant offers up a revamped menu that continues the tradition of kaiju-inspired dishes which would satisfy monstrous appetites. 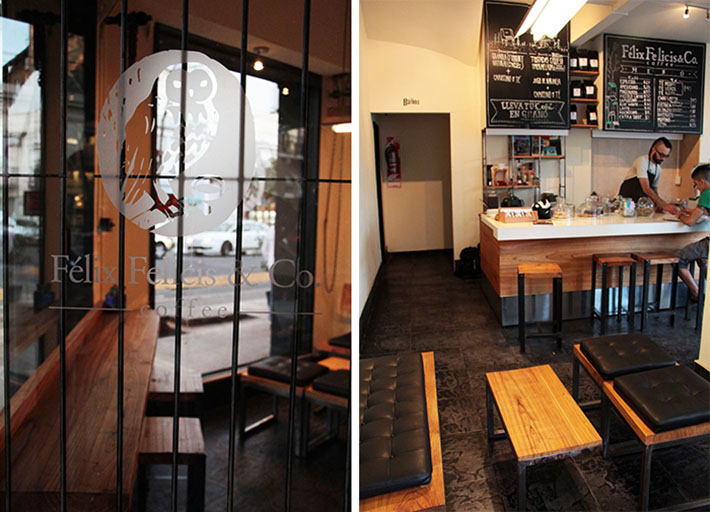 Of all the Potter-themed cafes and restaurants in the world, we actually like Felix Felicis in Buenos Aires the best because of its hipster-theme and very subtle homage to the Potterverse. Serving wholesome food and good coffee, the cafe isn’t flashy like its counterparts, while still maintaining some cool features to satisfy the adulation of fans.

Serving wholesome food and good coffee, the cafe isn’t flashy like its counterparts, while still maintaining some cool features to satisfy the adulation of fans. 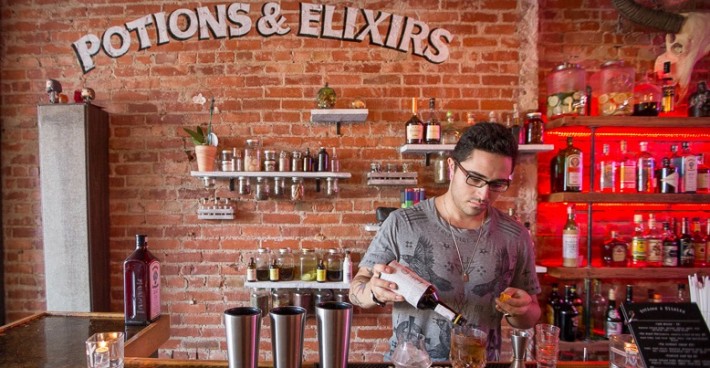 When it comes to Harry Potter inspired cocktails, no one does it better and more unique than The Lockhart Cocktail Bar. Named after the infamous Defence Against the Dark Arts professor, the locale is owned by two Pottermores who wanted to capture the magic of the widely-acclaimed series.

Their wonderfully concocted drinks such as Death Potion comes with flavourful ingredients such as Angostura and Horseradish – its eventual presentation is a visual feast too. 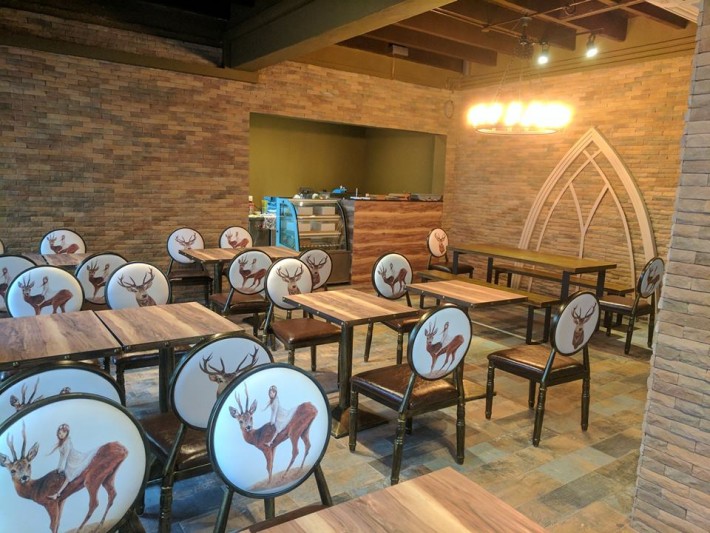 If there is a place on earth we could scream portus with a Portkey in our hands, that would be Platform 1094. This Harry Potter themed restaurant in Singapore rose to fame and popularity with its unique decor and its magical drinks.

The most beautiful of which is the flaming Goblet of Fire that is served with blue liqueur, a strong Barcadi 151, and cinnamon flakes, lit to a sparkly perfection. HOW I MET YOUR MOTHER – MCGEE’S PUB, NEW YORK CITY

Ever since the show launched in September 2005, it became in instant hit with the viewers for its unique structure and eccentric humour. The McGee’s Pub in New York City recreates the very same vibe of the drinking hole that Barney patronises.

The wood-lined Irish pub serves regular bar grub and draft beer that makes this place legen – wait for it – dary. 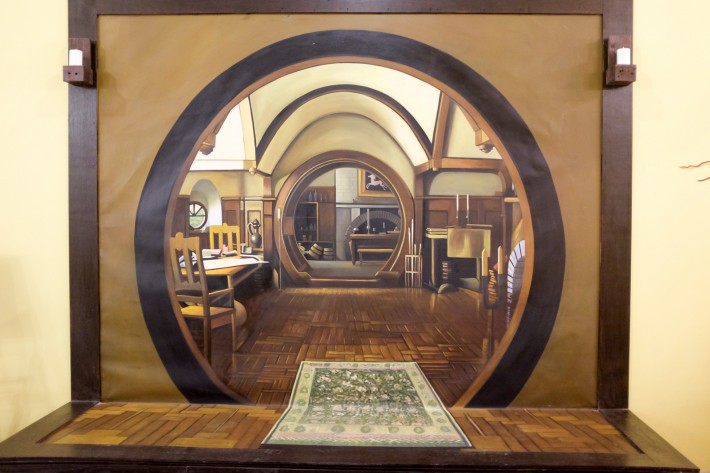 LORD OF THE RINGS – THE SHIRE CAFE, SRI PETALING

For Lord of the Ring fans out there, you would be glad to know that The Shire Cafe exists in Kuala Lumpur. Also, the wall motifs and the unique Bilbo Baggins home portrait give a certain depth of perception to the entire restaurant; reminiscent of what a hobbit’s home would look like.

The adorably named menu item such as the Fallen Tower consists of breadsticks made with a waffle iron that has a chicken sausage and cheese within. Do not be surprised if you find yourself wanting more. 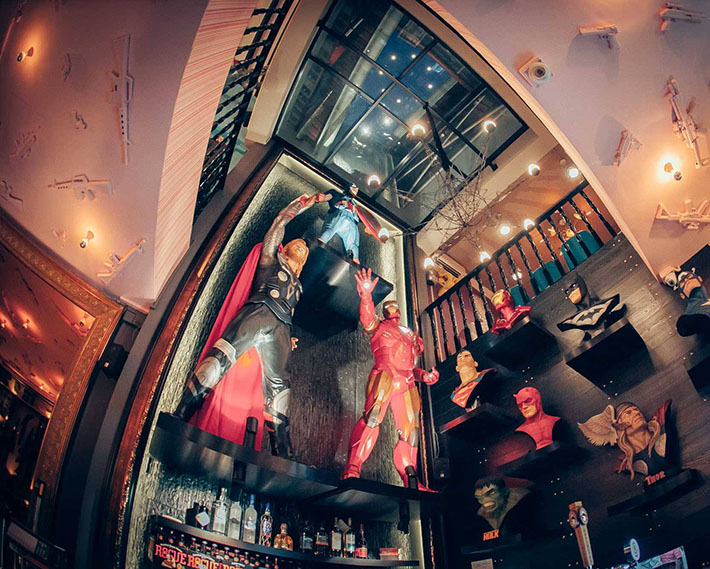 What happens when you love more than one superhero? Hungry Heroes has got you covered by featuring the entire range of Marvel’s iconic characters in the form of busts and human-sized figurines.

Partake in the restaurant’s hot favourites such as the Hungry Heroes Platters and the Steak Out as you have a banter on the chronological sequence of the entire franchise. 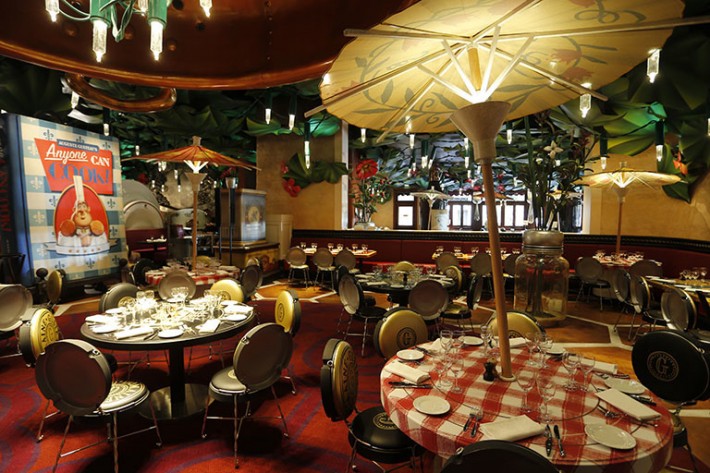 The exquisite looking restaurant located in the heart of Disneyland is established based on the film Ratatouille. Diners can feast on the finest French cuisine in this Parisian bistro while adopting the perspective of Rémy – The little chef mouse.

Have their famous ratatouille topped off with a grilled steak or roasted cod fish – there is no way you could ever go wrong with your order in this restaurant. 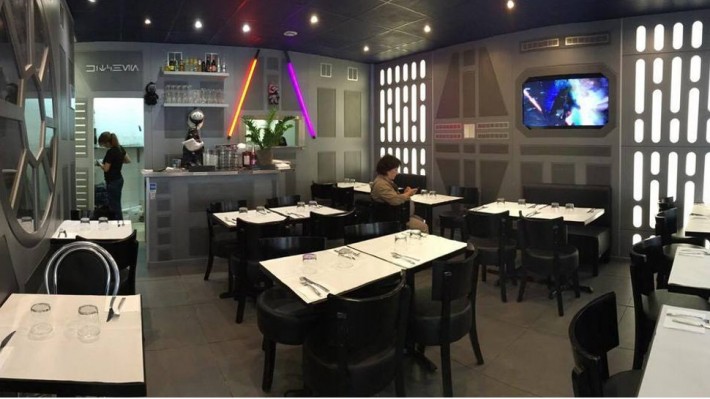 Embrace the dark side as you enter the Star Wars inspired restaurant. The overall design cues of the interior is that of the Death Star with its pill walls and multiple little touches.

The unique menu features many sweet and savoury crepes that are translated into Aurebesh alongside other franchises including Vulcan and Gallifrey. You would not have any difficulty in spotting the locale with its iconic blue awnings and the storm trooper stickers in the window. 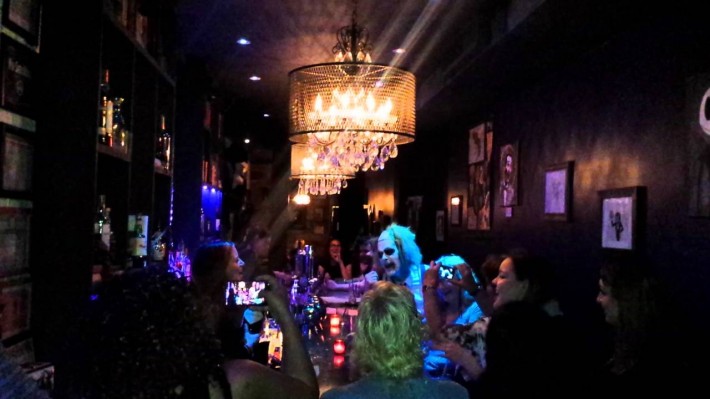 Tim Burton is world-renown for his dystopian outlook in all his creations, making for a unique blend of all things dark and lovely. The Beetle House pays homage to the creator with its almost gothic like interior filled with purple fluorescent lights.

The food is no slouch either. With options such as Sweeney Beef and The Butchers Delight, you would be in for a treat as you dig in as the menu to die for. 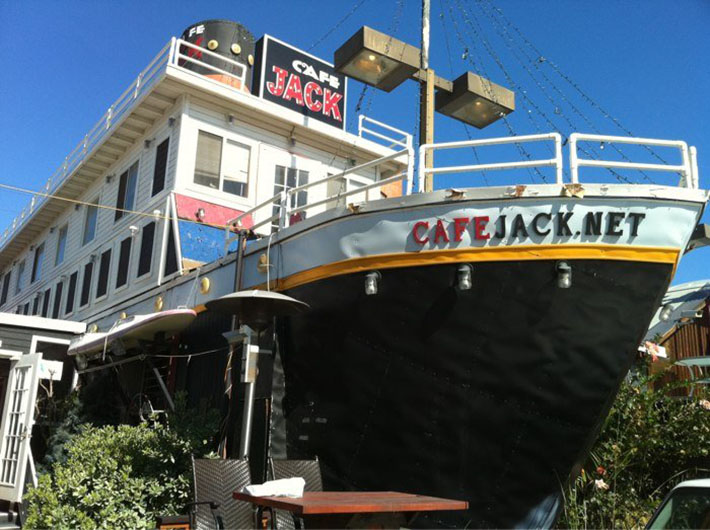 Yes, the cafe is in an actual ship. Located in Koreatown in Los Angeles, Cafe Jack serves Asian-fusion cuisine in a ship-shaped structure, filled with Titanic memorabilia.

Of course, no one wants to relive the sinking of the Titanic, but maybe paying a visit to Cafe Jack will affirm your love for young Leo…