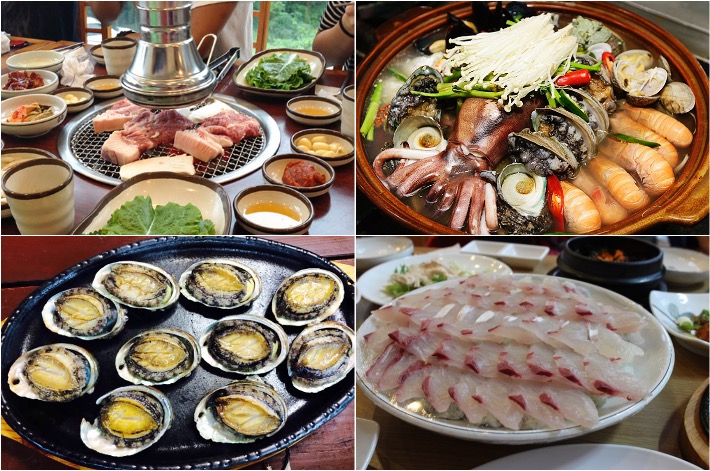 Jeju Island is off the coast of South Korea, known as the “Island Of the Gods”. It is a popular tourist destination that is three times bigger than Seoul city and is accessible via direct flights from Korea’s domestic airports and neighbouring countries such as Japan and China.

Jeju Island is best known for being the home to many deep-diving women, or Haenyeos who would put on their wetsuits to dive into the sea for the freshest octopus, clams, squid, seaweed and other kinds of seafood.

With that, you should know that raw seafood is the specialty of many restaurants in Jeju Island, on top of their local produce such as barbecued pork from Jeju’s black pigs and pheasants. 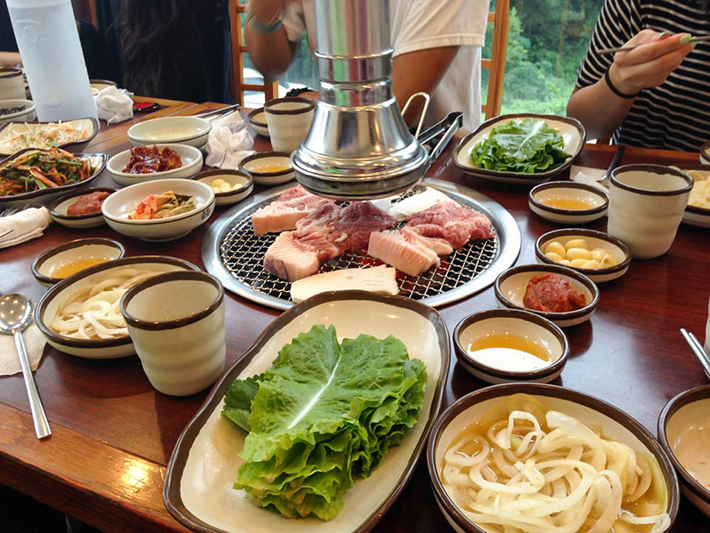 One of Jeju Island’s most famous dish, black pork is served in traditional Korean BBQ style where you get to grill your own meat on top of burning charcoal. Choose to have the succulent meat in a vegetable wrap and some dipping sauce or have it plain with rice as a filler.

There are plenty of restaurants serving black pork on Jeju Island, so there really is no excuse for you to miss this out! Yes, blood sausages are really made from blood—pig’s blood that is. For those who are not put off by the sound of it, give it a go and you may find that it is to your liking after all.

Different types of vegetables are mixed together with blood and then stuffed into the pig’s intestines before it is ready to be steamed. Blood sausages can be found in restaurants selling black pork and also as street food in markets. 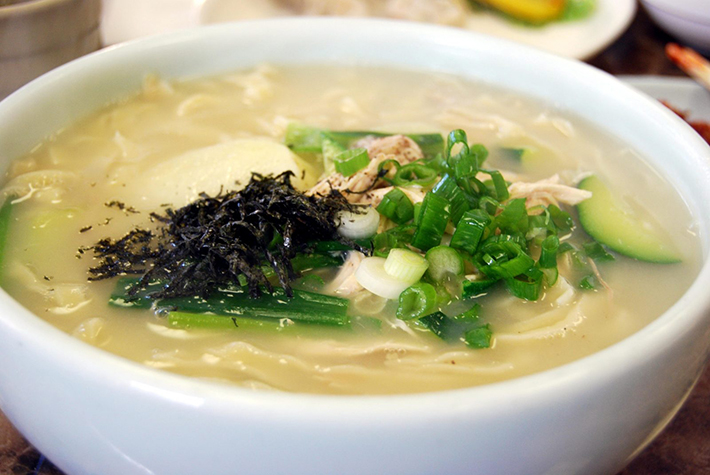 Many people enjoy having their buckwheat noodles cold, especially in summer. Nothing beats a refreshing bowl of cold noodles when you are trying to cool off from the sweltering heat. 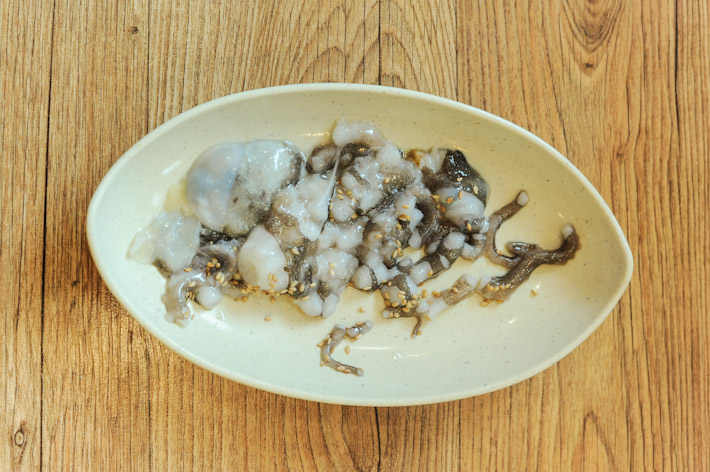 The world is facinated by these wriggling worm-like octopus tentacles which has made its way into tons of food videos. The octopus is cut up while alive and served on a plate with dipping sauce at the side.

Follow the Korean way by having your octopus raw but if that is too much for you, opt to have it in a seafood hotpot instead. 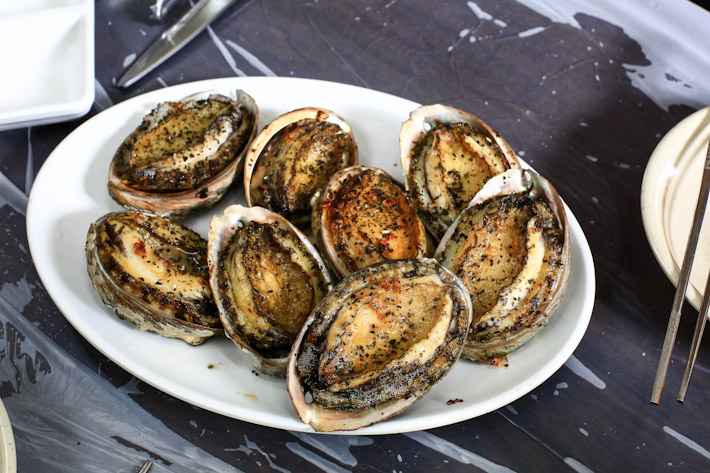 Abalones are abundant in the clear waters of Jeju Island and it is also considered to be one of their local favorites. It may be one of the most expensive food item you can find in Jeju Island but you must not leave without having a bite of it!

One of the best ways you can enjoy abalones is to have it straight off the top of a Korean table grill. If not, other popular choices include abalone porridge and abalone in various types of stews. 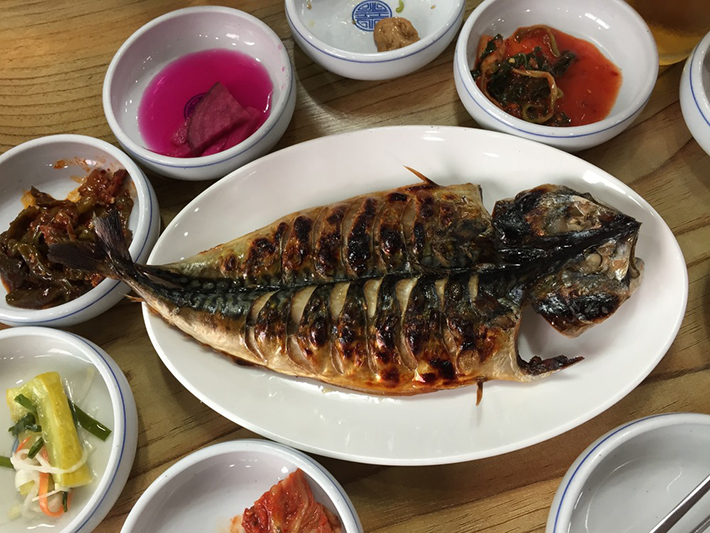 Photo Credit: On A Shanghigh

Any local from Jeju Island will tell you that mackerel is one of their favourite fish types. It is an inexpensive type of fish that is usually grilled or braised. Although it looks plain and ordinary on the outside, the flesh of a mackerel is very soft and flavourful if handled by an experienced chef. 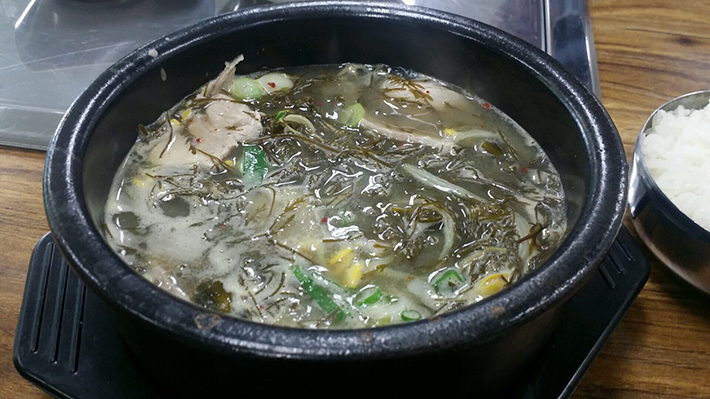 Gulfweed grows between the rocks in the sea and is used to make soup alongside other ingredients such as pig bones and intestines. The soup is very nutritious for the body as it contains plenty of calcium and vitamins. Slightly more pricy than the average fish, hairtail is a slender and long fish that can be grilled or boiled in clear or spicy kimchi stew with vegetables. It is very difficult to preserve the freshness of hairtail so if you choose to buy it from the markets, it would be wise to have it grilled and consumed immediately.

If not, there is no lack of restaurants in Jeju Island serving delicious hairtail fish soup! 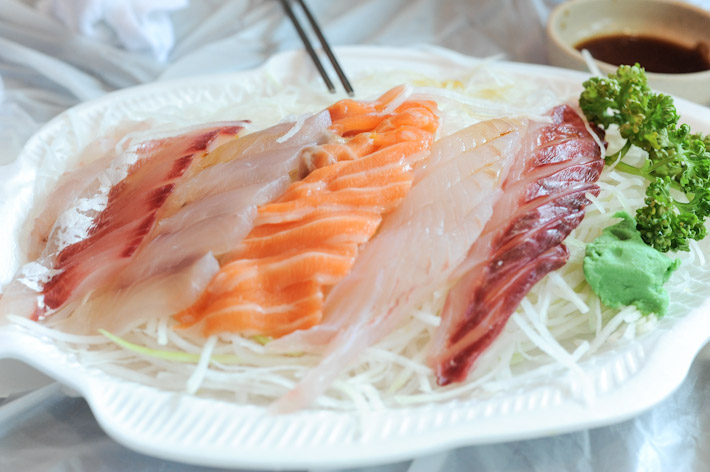 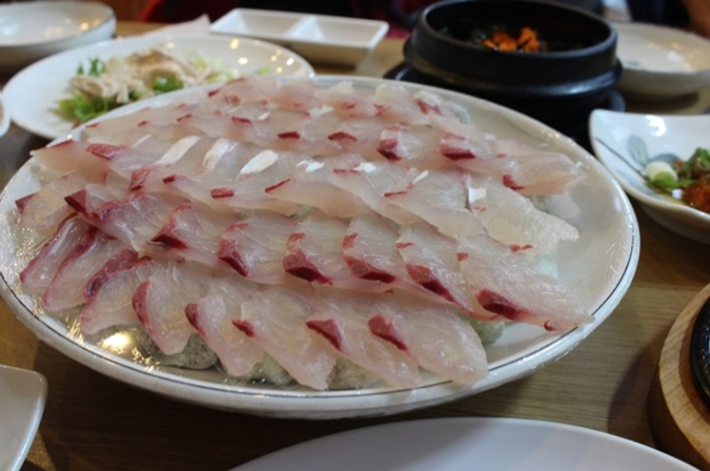 Unless you are allergic to seafood, raw seafood is a MUST-TRY in Jeju Island! It takes plenty of effort for the Haenyeos who go out into the sea regardless of harsh weather conditions just so that guests are able to try the freshest seafood that the island is known for.

The variety of seafood is simply mindblowing—from shellfish to octopus, different types of fish and abalone. 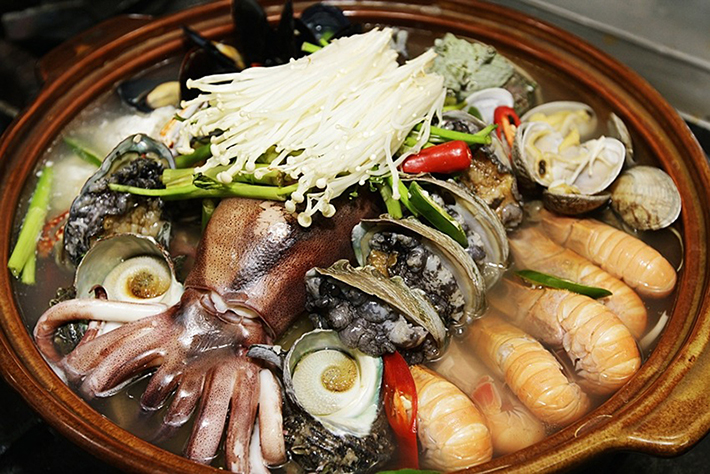 If you are not a fan of raw food, you can always have your seafood boiled in soup. A stone pot is usually used and filled to the brim with spicy stew and generous portions of clams, cuttlefish, shrimp and octopus.

Julee is a staff writer for ladyironchef. She is an advocate of travel and hopes to visit Iceland someday. She enjoys having a good conversation over tea and a slice of cake. There are two things in the world she cannot live without—food and humour.

Hi, ladyironchef, After seeing the food items that you provide. I was wondering if you could send me your jeju island trip itinery.

I’m leaving for Jeju tonight. I was also wondering if you can email me the places for these food in Jeju & would be nice if you also include the local name of the dish in your blogs.
Thank you.

Hi, iwill br going to jeju in may. wondering if you can send me the address as well as the names of the dishes you mentioned aboved. thanks.