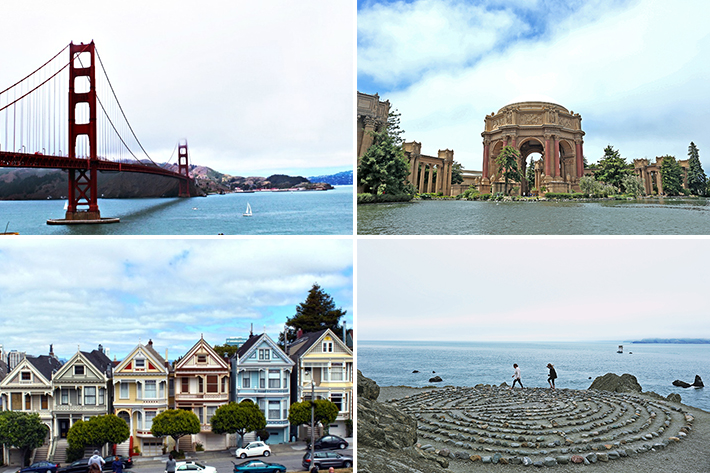 What is the first thing that comes to your mind when you hear about northern Californian city San Francisco? We bet that it would be none other than the majestic Golden Gate Bridge.

But there is so much more to see and do besides checking out that world-famous bridge! San Francisco is lovely. Characterised by year-round fog and steep hills, The Golden Gate City is indeed one of a kind. 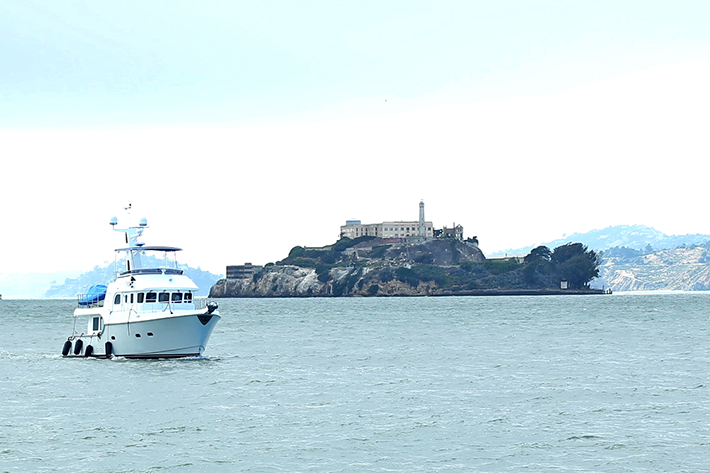 Alcatraz Island was once home to America’s most notorious criminals. Today, the former federal prison is an exceptionally popular tourist destination – it receives up to one million visitors annually!

Tickets to Alcatraz Island sell out weeks in advance, so do make prior arrangements before you arrive at San Francisco. 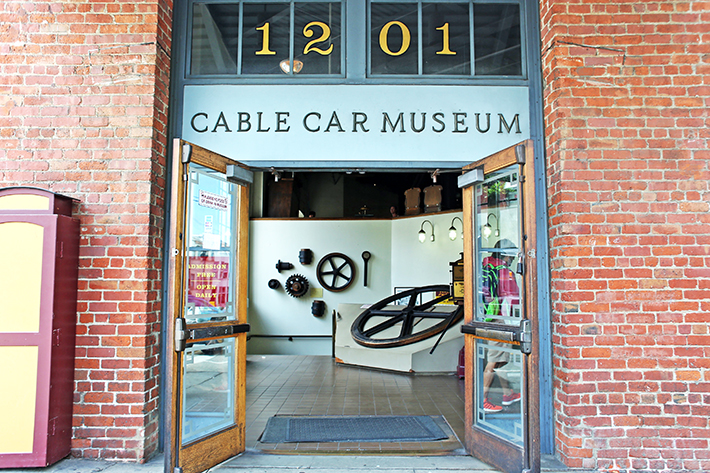 Opened in 1974, Cable Car Museum is a free museum where visitors can learn more about San Francisco’s most beloved transport system. At the Cable Car Museum, find out more on how cable cars work and the history of it. Three antique cable cars are on display too, namely #54 Trailer, Railroad #8 and #46 Grip Car. 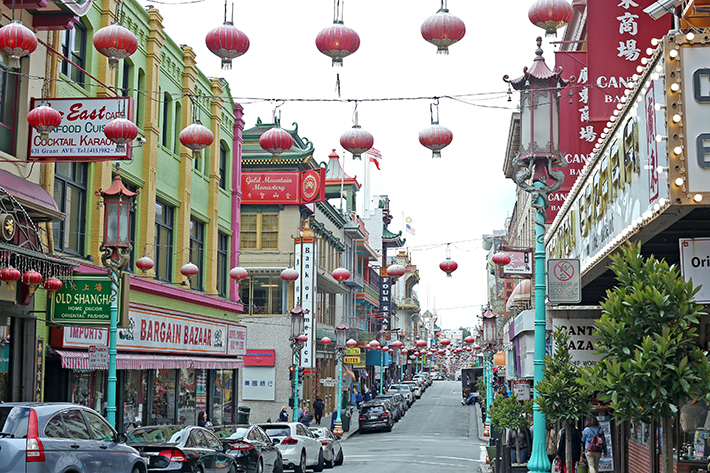 San Francisco’s Chinatown is the oldest and largest chinatown outside of Asia. From Chinese delicacies, budget knockoffs to tea tastings, it is real colourful here.

The precinct itself contains historic infrastructures and is the venue for all Chinese festive events. 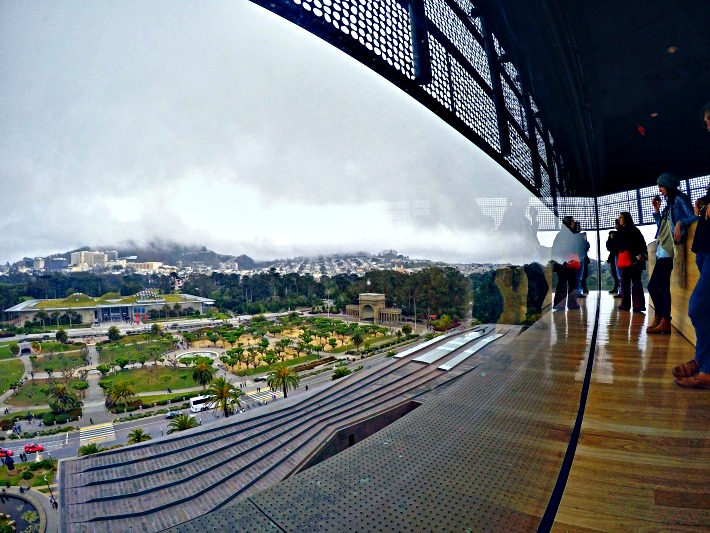 The de Young Museum is a must-visit for architecture and design enthusiasts. The fine arts museum showcases priceless American art pieces, textile arts and other masterpieces.

A general admission ticket to The de Young’s will cost US$10 per adult, but entrance to the Hamon Tower – which boasts panoramic views of San Francisco – is free. 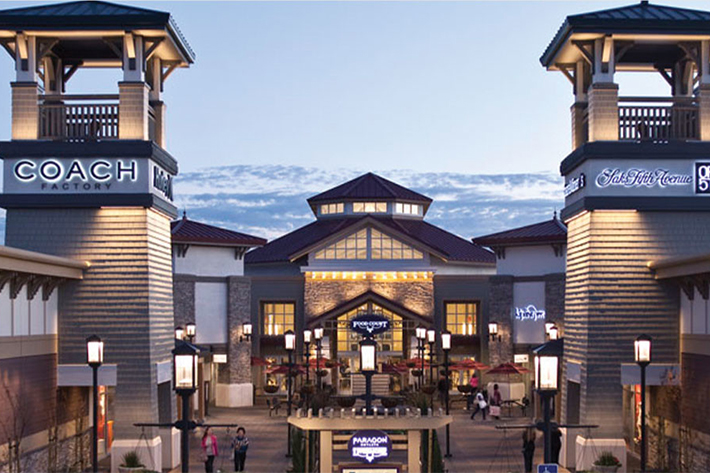 To satisfy the shopaholic in you, head over to San Francisco’s Premium Outlets at Livermore. There are more than 170 international brands here; anticipate familiar names such as Coach, Gucci, Prada and Versace.

This shopping paradise is 40 miles away from downtown San Francisco and will take approximately 45 minutes if you are driving. 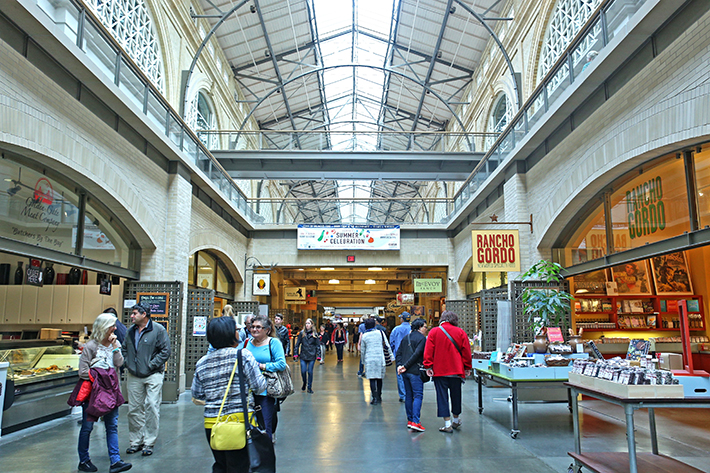 With commercial official spaces and a marketplace under its roof, the Ferry Building functions more than just a ferry terminal. There are many cafes and restaurants to dine at; luxuriate over superbly fresh oysters at Hog Island Oyster Co whilst admiring the San Francisco – Oakland Bay Bridge, and visit specialty mushroom vendor Far West Fungi. 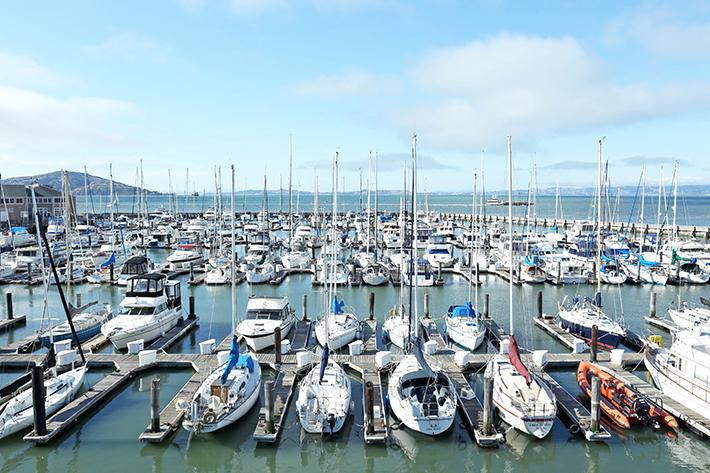 You need to spend a day at Fisherman’s Wharf.

Visit the squawking pinnipeds at the Sea Lion Centre, dine at one of the many seafood restaurants, check out the floating yachts, educate yourselves at Aquarium of the Bay and take a selfie with the wax monuments at Madame Tussauds San Francisco.

Feeling even more adventurous? Board a helicopter or join a water tour! 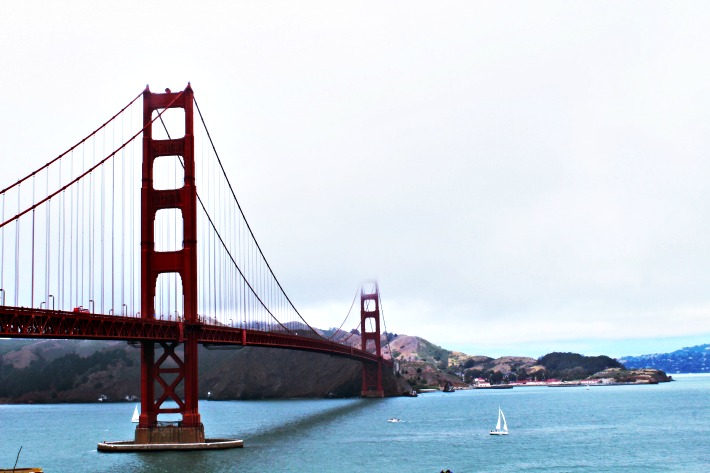 The 2,737-metre long iconic attraction is a must-see in every traveller’s bucket list and till date, even locals are in awe of its magnificence. The suspension bridge can be viewed from various vantage points.

To avoid the touristy crowd, we recommend taking a leisure stroll down Baker Beach. If the steep inclinations of San Francisco’s streets are not enough of a workout, make your way to Lands End for a scenic hike. The park is situated within the Golden Gate National Recreation Area and the coastal trail itself features an interesting variety of terrains. Characterised by eight sharp U-shaped bends in a single steep block, Lombard Street is the “Crookedest Street” in the world.

The street itself is an attraction, with tourists from all over the world flocking to Lombard Street just to catch a glimpse of it. Walk on the sides or self-drive through the zigzags for a memorable scenic experience. It is strangely photogenic, indeed. 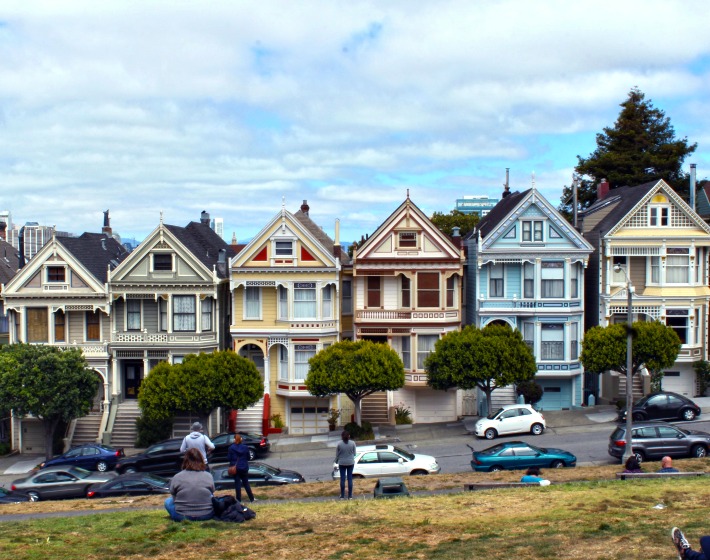 Painted Ladies refers to this iconic stretch of colourful vintage Victorian houses along the corner of Hayes Street and Steiner Street. This attraction is a hit amongst photographers for its stunning juxtaposition – beautiful Victorian homes with San Francisco’s skyscrapers in the backdrop. 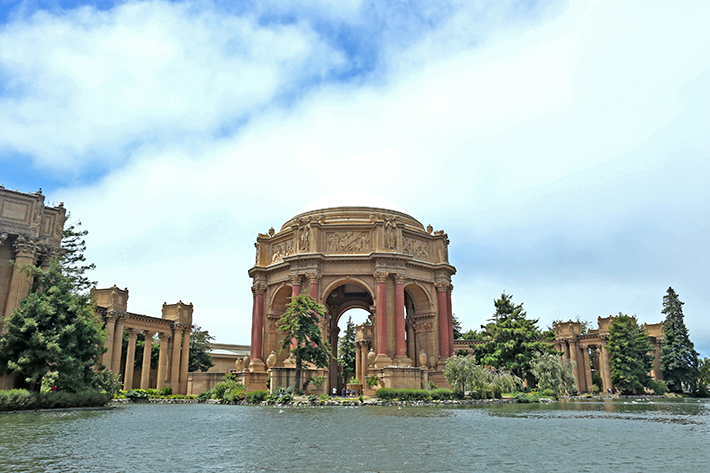 You might recognise the Palace of Fine Arts from the following dated movies, The Room and The Rock. The gorgeous monument is listed in San Francisco Designated Landmarks and is surrounded by a manmade lagoon. Designed by architect Bernard Maybeck, the infrastructure is largely inspired by the Greeks and Romans. 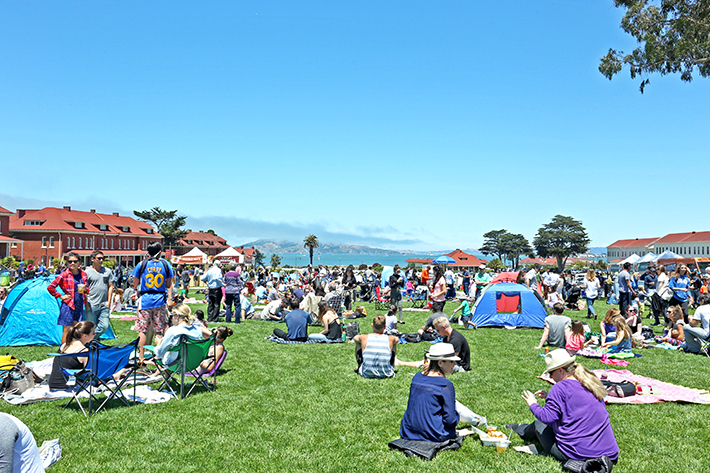 Presidio of San Francisco is a historically rich park that once accommodated the native Costanoans, Spanish colonialists and eventually transformed into the designated military post for the U.S. Army.

Today, it is a part of the Golden Gate National Recreation Area. Drop by and visit one of Andy Goldsworthy’s works or have a picnic at Crissy Field. 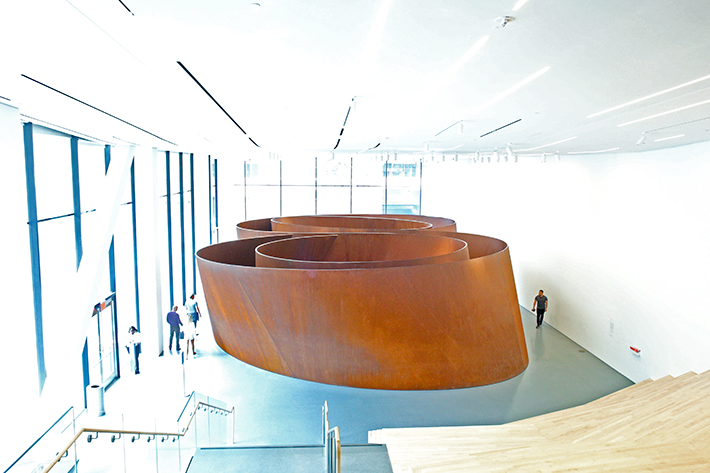 San Francisco Museum of Modern Art (MoMA) reopened last month with a bang. This opening is a long awaited one, especially when the museum was previously closed for three years!

The 235,000-square-foot modern museum exhibits internationally acclaimed collections of modern and contemporary art – definitely worth a special trip and the admission ticket fee. 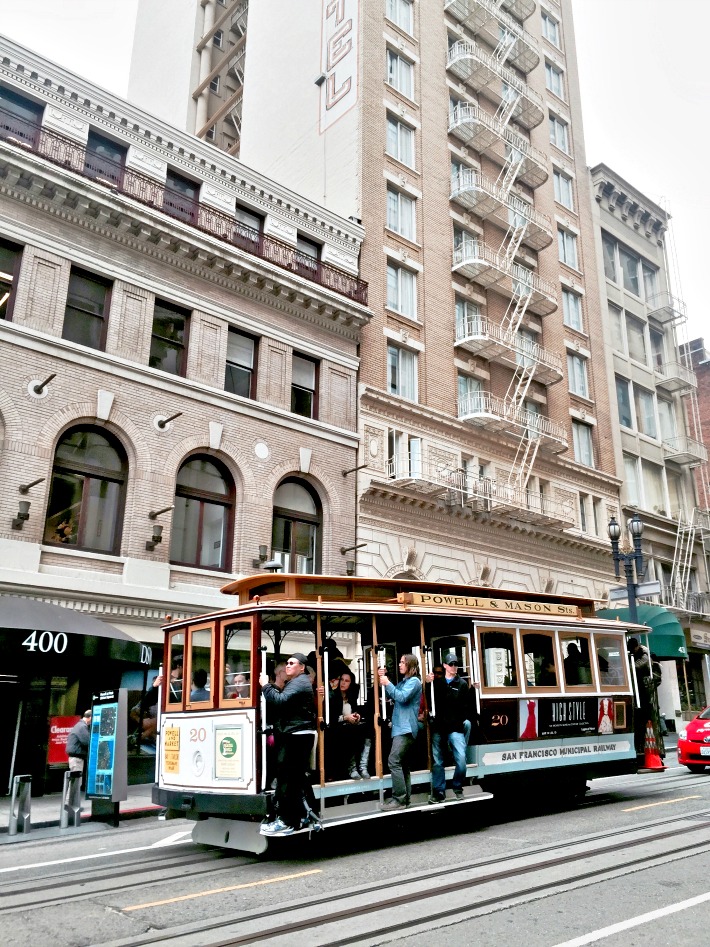 Situated in the heart of San Francisco and spanning across 1.05 hectares, Union Square is a public plaza boasting endless dining, entertainment and retail options. Keep your eyes peeled during festive holidays as many exciting events will be taking place at this hub. A ride on the cable car is not free, but visitors can still admire the transport from afar.

Located 13,593 kilometres away from Singapore with previously no direct flights available, San Francisco used to be a far-fetched vacation destination. And this no longer the case.

United Airlines has recently launched direct non-stop routes between these two global hubs and you can now arrive San Francisco from Singapore within 15 hours and 30 minutes. More reasons to visit the wonderful city, yes?