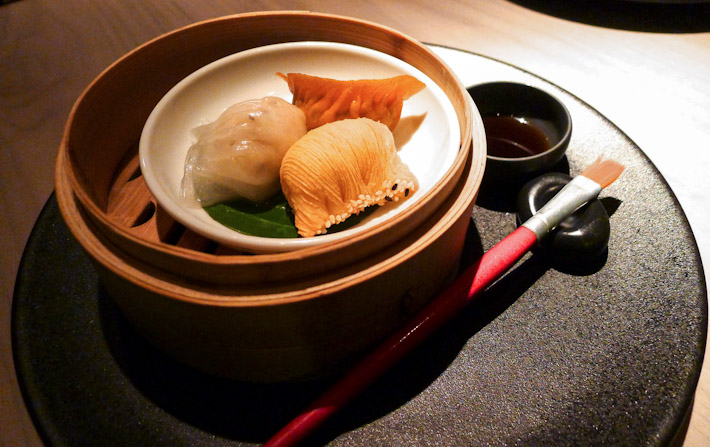 Good Chinese food and restaurants are aplenty in London, but I have always found a general lack of variety in the food they serve. Whilst the food are tasty, finding the same few items on the menu in most restaurants can leave one relatively bored of Chinese cuisine after a while. So, you ask, where can one satisfy a Chinese cuisine craving and be pleasantly surprised by the meal at the same time? Well, if you are willing to splurge a little, I’d definitely recommend HKK London.

Opened by the international Hakkasan group of restaurants, HKK serves modern Cantonese cuisine that errs on the edge of fusion cuisine, but yet manages to retain its strong Asian flavours. HKK has adopted the concept of a blind-tasting menu, with 15 courses for dinner at £95 per person and a shorter 8 course version for lunch at £48. If you wish, you can ask for the menu beforehand, but the anticipation of the next dish definitely makes the meal more exciting.

The menu changes regularly, but for ours, we were presented with a total of 7 appetizers, 1 palate cleanser, 4 main courses, and 3 desserts. As with most tasting menus, certain dishes stood out more than others, but the overall standard of food was very high. Out of the fifteen dishes we had, these, in my opinion, were the highlights:

There is usually a certain guilty pleasure involved in eating Peking duck because of the unhealthy layer of skin and fat. With HKK’s version of the Cherry wood roasted Peking duck, however, the sinfulness was worth every bite. The duck meat was well roasted, and the sauce was not too sweet.

The Dim Sum trilogy comes up top, perhaps only second to the wagyu beef. Served in a bamboo basket, the waiter told us to use the paintbrush to coat the dimsum sparingly in the soy sauce. Think dimsum reinvented: notes of truffle were infused inside the different types of skins (one in pastry and another in fried skin) and each had a distinct taste from the others. I can safely say this is the best dimsum I have ever had.

Many people have tried lobster noodles in London, but HKK’s Wok-fried lobster with pan-mee takes the cake. At first glance, it looks more like lobster pasta, but they actually use the kind of yellow noodles you would find in wanton mee. I finished the noodles in a few mouthfuls, and was left imagining how wonderful it would be to have this lobster noodle served in full size portions as per other Chinese restaurants.

One word to describe the Jasmine tea-smoked wagyu beef: perfection. It is hard to explain how stellar the beef was. Simply saying that it was tender, fragrant, and flavourful, hardly does the dish any justice. I definitely wished that I could have had a second portion of it, or maybe even a third.

At the end of our meal, the head chef presented each of us with a stamped copy of our menu that night, as if to congratulate us on the completion of the meal. Indeed, a fifteen-course dinner may sound daunting, but with miniscule portions, we left the restaurant deeply satisfied, but not overly full. Dining at HKK was indeed a remarkable experience, and I would highly recommend it for a memorable night out.

About the writer:
Amanda is a Singaporean with a passion for good food, fashion, and travelling. She is currently attending boarding school in the United Kingdom, and looks forward to many such new experiences after she begins university next year. Follow her adventure on instagram.