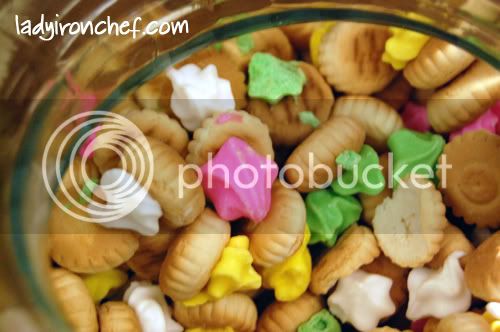 I had this idea last year to do a summary of the places I’ve been to. But the list was too short and i didn’t really went to a lot of places so it had to wait until now. I’ll not begin with one of those hackneyed lines like “Wow, time flies…“, “I can’t believe the year is coming to a close..” since I was hoping the year would end faster and fast-forward to June next year.

Some had asked me why my reviews are always positive and doesn’t seem to have much bad points. To set the record straight, I’m not trying to be political neutral. I just do not like to criticise, since I always believe if you want to criticise something, you need to be better than them. Since i can’t cook food that taste better than the ones i tried, and unless I can provide valuable feedbacks to improve the food, otherwise there isn’t any point. I’m not qualified anyway.

“What’s the purpose of my food review if i don’t criticise?” Well, I definitely don’t see myself as a food critic, i don’t have the qualifications, nor do i have the depth of knowledge to discuss about all the food. ladyironchef is more about a place for me to share the experience of the places I’ve been to, more like i describe rather than comment about the food. It’s more like reporting style without any positive or negative influence. Of course occasionally when i tried some places which are fantastic, I’ll highlight and recommend them. That’s the main reason why there’s no ratings for the food,  as taste is very subjective it won’t be fair to put a rating for them based on my personal likings.

For the restaurants listed in the various categories, the order of the restaurants are not ranked and the list will be controversial since not all of you might like the ones which i recommend. Furthermore, there are only based on the restaurants which i’ve been to, and not on all the restaurants in Singapore. There are definitely better restaurants out there which i have yet to try.

Now before you sharpen your knife and have a go at me, I’ll say this first. The restaurants on ladyironchef top restaurants are definitely not the best in Singapore, there’s always a better restaurant somewhere out there. It only represents what I’ve eaten before. 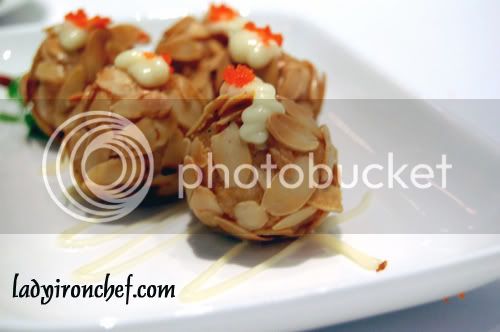 Everybody knows dim sum is one of my comfort food. My personal favourite? It definitely has to be Royal China. For the quality in dim sum, their prices are actually quite reasonable, and the ocean blue decoration of the restaurant makes dining a pleasure. You need to try them before raving about how good some other particular places are.

Now, what can we say about Yan Ting? Sheer prestige, together with the exquisite dim sum in a contemporary Chinese restaurant. Where others charge dim sum by per basket, Yan Ting is class, they do it by per piece of dim sum instead.  Definitely one of the best in Singapore, if not for the rather steep price, I’ll be going there every weekend. Their char siew sou is the talk of the town. And not to forget, their golden foil bird nest moon cake. 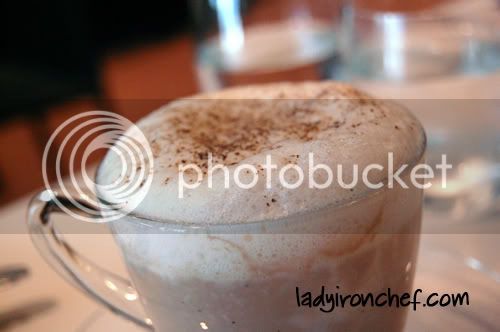 Before you start thinking whether this category is going to be filled up by dim sum, let me show you Sage the restaurant. Like what i mentioned during the post, Sage’s a strong contender to ladyironchef top restaurant 2008. And here it is. The genuine and friendly service from Kimberly, plus Chef Jusman creative combination of ingredients in the dish, just did the job. Their cappuccino of mushroom soup is the best I’ve before.

While I always try not to criticise, the following few are what I felt that wasn’t up to the standard, or at least, my own expectations. Bonta Italian restaurant came very close to joining this list, but for the benefit-of-the-doubt, i thought it wouldn’t be fair base on the pasta we’ve, as we didn’t order their signatures. Again, the order of the few places are not ranked. 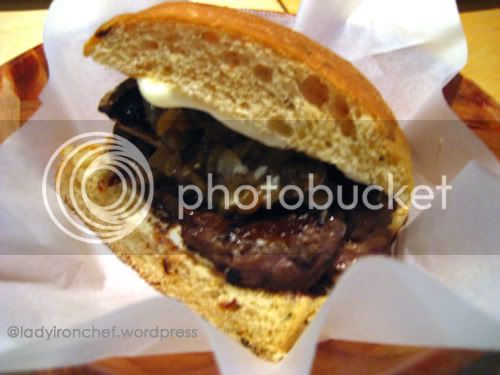 With all the hype surrounding Tuckshop, I went with anticipation. But like they say, the higher the expectation, the bigger the disappointment. The steak sandwich was not good enough. While the place’s a good place for chill out with live music, the food can be better. 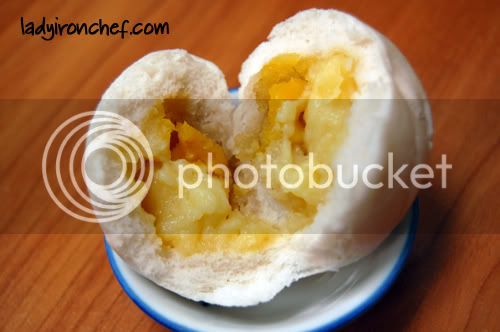 Another place which i heard so much, yet delivered so little. Victor’s kitchen is tagged with “good dim sum at cheap price“. No doubt prices are cheap, but good dim sum? Not in my humble opinion. Their signature milky custard bun came cold, and that was enough to put me off. Most of the dim sum were average, with more misses than hits. If you are looking for cheap dim sum, this is the place to go, Otherwise, steer clear!

While they are well-known for their desserts, we made the mistake of ordering the main course. Hence, the disappointment in this case was vented towards that. Bakerzin should just stick to doing what they do best, desserts! Unfortunately, they had became commercialised, and personally i felt that their brand appeal isn’t nowhere comparable to Canele.

It is boring to always read the same style of writing. So I’m always reading the way good writers wrote. My English isn’t excellent, so it always took me a long time to write one review, but i was quite pleased with a couple of my write-ups, while you might not consider the writings to be good, they meant a lot to me.  Again, the order of the following places are not ranked.

Meet Alice, in wonderland. This was one of the post which pleased me with the nice photos and the descriptions I’ve used. Oomphatico’s has a very fairytale-like setting, thus i thought Alice in wonderland was quite good to describe the place. I was very tempted to put them under ladyironchef top restaurants, but decided against it because i didn’t want to repeat the place twice. Nonetheless, they deserved a visit for the ambience!

The whole race theme was fast & furious, focusing on Lamborghini the prized car, since the burger was called lamburghini. I surprised myself with this write-up, as it was one of the earlier post which i started to write differently. Hotshots burgers are actually not bad, i went to the place twice.

The words flowed naturally through me when i wrote for the dessert outing. Perhaps I got inspired by our fun outing, everything just came, and although Nectarie desserts weren’t very good, I’m pleased with this write-up. “Our eyes literally light up at the mention of desserts, our saliva flows at the thought of desserts, and our imagination run wild at the sight of desserts.”

It was a strong fight for the various nominates, and i didn’t want to add more to flood the page with too much information.  You can read about some of my others favourite write-up here. Not everyone will agreed with my choices, but it’s okay. All of us are entitled to our own opinions since our taste buds are all different!

It has been a food-ful year. The best thing that happen was getting my DSLR in May, and then the wonderful 60mm macro lens which brought my photos to another level. Also, the various LIC food outing events which had been relatively successful. Getting to know new friends of similar interest, and a group of dessert enthusiast which sparked my interest in baking.

ladyironchef has see me through the darkest period of my life, it has become a friend, whom that I can look forward to and think about. I hope LIC brightens your day and make your stomach hungry too! But if you are still not convinced, carry on hating me then. Like they say, love me or hate me, its still an obsession! Thank you all for reading, especially my friends and readers who always gave me encouragements (you know who you are).

Happy new year, and have a food-ful one ahead!

happy new year LIC! wishing you a food-ful new year too and a fast forward to nx jun =)

May 2009 bring you more hits than misses. Happy new year!

Wishing you a blessed and productive 2009 ahead.
Appreciate your reviews on the eateries to as it serves as a guide for the places where I could try out

Ah yes, I like the revelation when I stumble upon your point “if you want to criticise something, you need to be better than them.”

As I tend to criticise a lot when it comes to food served at restaurant that frustrates my accompaniments or rather waiters/management sometime.

PS: Out of curiosity, why r u looking forward to next June?

greetings from kinabalu!!! anyway, perhaps you’re looking forward to ORD? haha. sigh.. It has been great knowing you and the other bloggers! LOoking forward to a new year of experiences and more reviews from you!

evan: thanks! haha no la, not even qualified to be an analyst, i’m just a guy who enjoys eating, and meeting with the good company for food.

Nate: thanks you! Happy new year to you too!

Adeline: thanks for the encouragement! Yeah i always believe if you want to criticise you need to be better. I’ll tend to think if i’m the management, what will i do instead to make it better

sihan: haha at kinabalu still can online! lol! yeah of course, in June. its great knowing you guys too, have fun over there!

Before signing off, enjoy your New Year holidays and wish you a better 2009.

Wow that was a mammoth 2008 sum up. Well done. I’m also a fan of Oomphatico’s, especially since they changed the menu a few months back.

I like your theory about not posting negative feedback. I really like reading your reviews, it’s more enjoyable then reading so called “food critics” ranting and raving.

Keep up the good work and Happy New Year.

fen: yeah of course! that’s the main thing to look forward to. then the next phrase will begin. Happy new year to you too and let’s have more outings!

G: Thank you! Your encouragement really made my day! Yeah while some will prefer to read more critical reviews, i’m glad you like reading mine. haha. actually this isn’t a very mammoth sum up, i got so much i want to include, but in the end i guess i can’t write everything in, otherwise it will be too much! Happy new year to you too!

Hi! It is good to rank up ur favourite resturants. Actually, I have been reading ur blog quietly and leisurely on my sofa for several months, coz I am using LCD TV. This is my first reply for u. =)

I hope to see more of your reviews on buffets in future(preferably in central and west regions due to my convenience).

I remember eating those biscuits with colourful “sweet” on them when i was a little girl.

Time flies…Happy New year to u and ur family.

hazel: hello there, thanks for reading my blog. but you didnt comment before! aiyoh, so many silent readers! haha. yeah sure, i try okay. but i’m not so much of a buffet person. haha. happy new year to you too!

dora: yeap, the biscuits are so nostalgic! thats why i like that picture. haha. happy near year!

haha, a “food-ful” year indeed! How apt! May you have a food-filling fulfilling year ahead then lol!:D

My laptop is connected to lcd tv & so, kinda of troublesome to walk to and fro the sofa. Me lazy!

My parents r fans of buffet. Whenever their birthdays r coming, I have to search reviews on buffets via blogs.