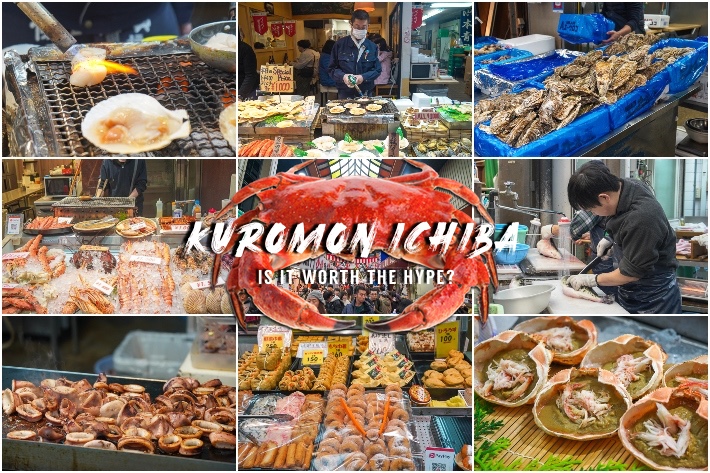 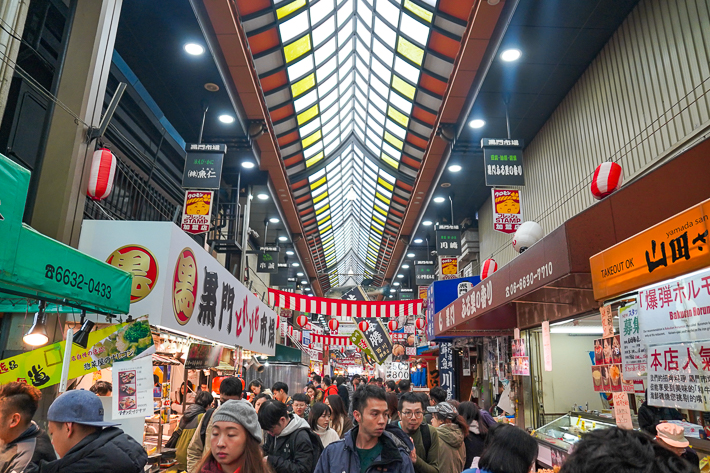 The market supposedly wakes up around 9am every morning and despite reaching there just slightly before the official opening hours, the place was already bustling and packed with people. 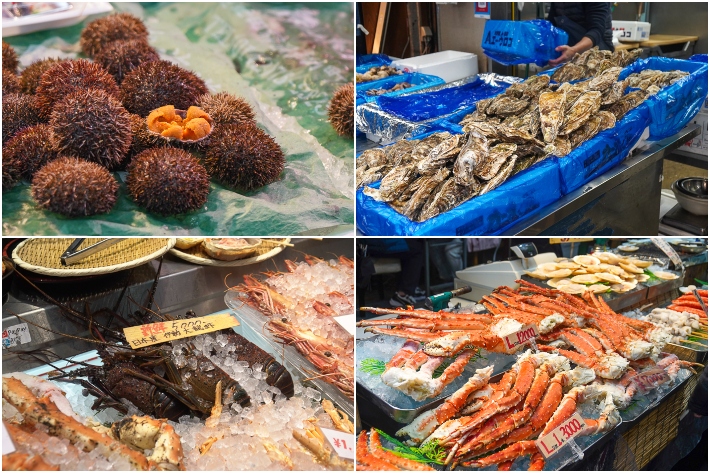 The bulk of the market specialises in seafood-related items. Whether you’re here to grocery shop or to down some freshly shucked oysters, the market has plenty of fresh seafood to go around.

Vendors line the front of their stalls with beautiful displays that showcase their colourful array of crustaceans and other sea creatures. The selection is pretty impressive and includes the likes of lobsters, snow crabs, oysters, salmon and sea urchins. 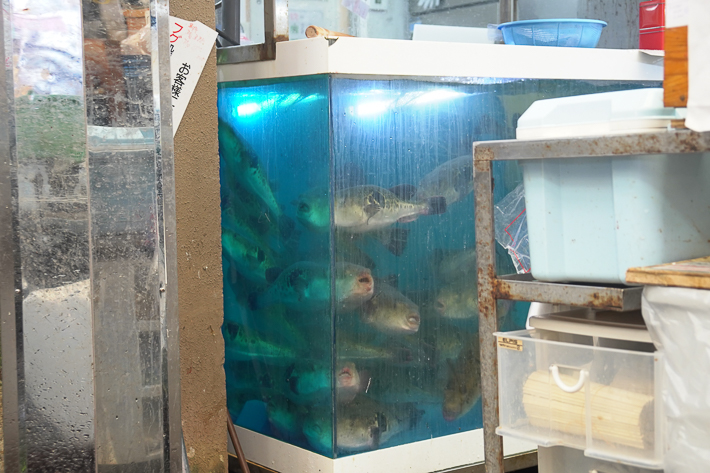 The market also has stalls that specialise in fugu, also known as pufferfish. While pufferfishes are known to be poisonous and dangerous to even touch, it is considered a delicacy in Japan. Places that sell fugu are required to have a government certification so fret not, you can safely sample this unique dish without worrying about being poisoned to death. 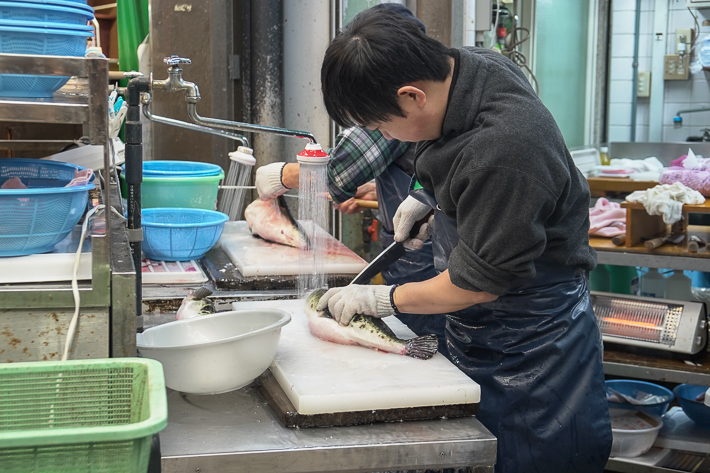 Watching a fugu being slaughtered for its flesh is not for the faint-hearted; the creatures are plucked from their tanks alive and squirming and are then immediately skilfully sliced open by the chefs. The process is bloody and quite stomach-turning, so if you aren’t a fan of gory sights, it’s best if you don’t witness the procedure first hand. However, for the more curious and adventurous, the grisly experience is definitely a unique one for the books. If you want to chow down on something that is piping hot and freshly cooked, there is also cooked seafood available for purchase. Watch your scallops being grilled right before your eyes while you munch on some skewered tako; your mouth won’t be able to stop moving! The appealing thing about Kuromon Ichiba is that you get the thrill of watching the vendors prepare your food; the built-up anticipation from watching it being marinated, cooked and garnished is enough to make one salivate! 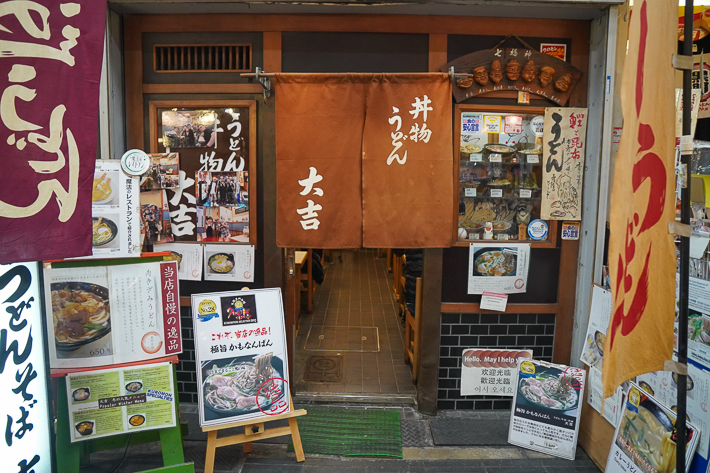 There are also a number of restaurants within and at the outskirts of the market for those of you who prefer to have a meal while sitting down. These restaurants serve a very extensive variety of dishes which include rice bowls, soba and udon. 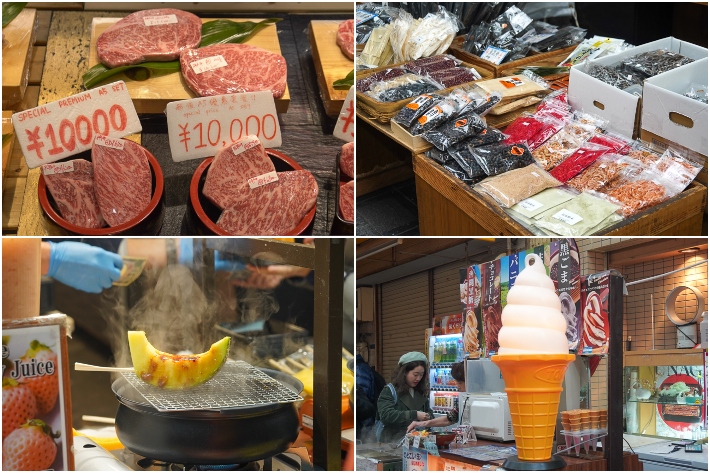 Aside from seafood, the market also has a variety of other food and snacks available to fill your bottomless pits.

We came across a wide assortment of goodies which ranged from fresh produce such as dried fish and vegetables to premium cuts of A5 Wagyu beef. Sweet tooths can even get themselves some ice cream and fruit! 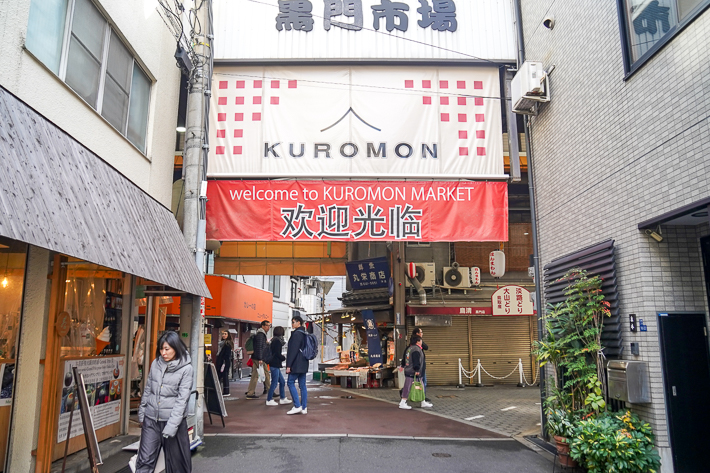 While Kuromon Ichiba undoubtedly has an impressive range of foodstuff for sale, the prices here are, however, much steeper than what we expected. Having visited this market a few years back, we were rather shocked by the mark up of prices. Granted, this is a popular tourist stop that attracts swarms of visitors daily, but some of the price tags that we came across were pretty outrageous.

The market is definitely worth a first-time visit for curious travellers, but we would probably give it a miss if we already had a relatively packed itinerary.