The Chinese Lunar New Year is an annual festival where many traditions culminate from exchanging of oranges to the receiving of red packets and more. Still, as far as the Chinese New Year goes, the iconic yu sheng toss remains at the helm of all things festive.

Yu Sheng, otherwise known as lo-hei or prosperity toss, is something that we’ve grown terribly fond of. A vibrant centrepiece dish comprising various elements, each boasting its own unique flavour and meaning behind it, the yu sheng is always the first order of business at any family gathering.

Yet, as we find ourselves going through the motion of this tradition year in year out, how many of us millennials can actually say that we truly understand this practice and its significance? To a season dedicated to good fortune, family reunion and feasting, here is our guide on lo hei, what it is and what it represents. 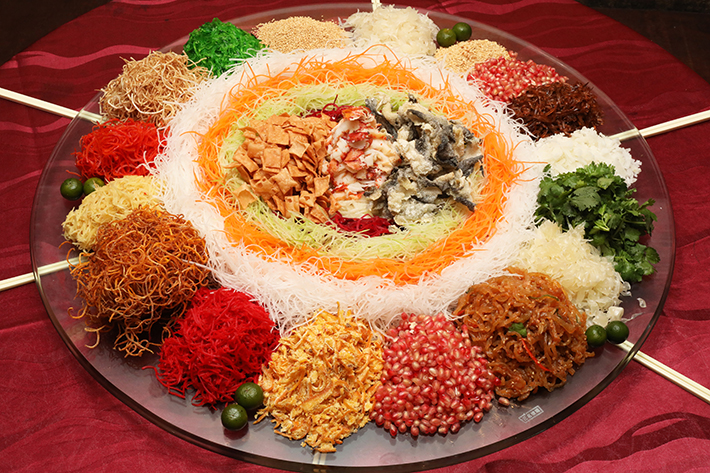 HOW THE MODERN INTERPRETATION CAME TO BE

Since its origins as a simple raw fish dish back in the 1930s, the recipe has undergone a series of transformations, and even until today, people are still finding innovative ways to present this dish. The dish was brought to Singapore in the late 19th century by the migration of Cantonese and Teochew migrants from China.

“Lo Hei”, in Cantonese literally translates to “tossing up good fortune”, and it refers to the ritual adopted in Singapore that involves a group of people gathered around a massive plate, tossing its contents violently while saying out auspicious phrases before eating it—it is popularly believed that the higher the toss, the better your prospects and fortune in the year ahead. At the very beginning, the salad itself consisted merely of raw fish slices, some vegetables and seasoning to taste. It was only much later on in 1964, where a quartet of chefs—known affectionately as the ‘Four Heavenly Kings’—reinvented the dish and served it at the then, newly opened Lai Wah restaurant. The new salad saw an improvement in texture, colour, and flavour. 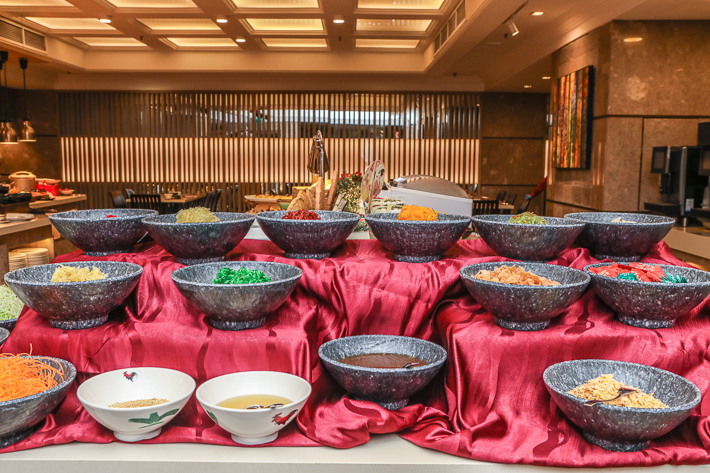 KEY INGREDIENTS & WHAT THEY REPRESENT 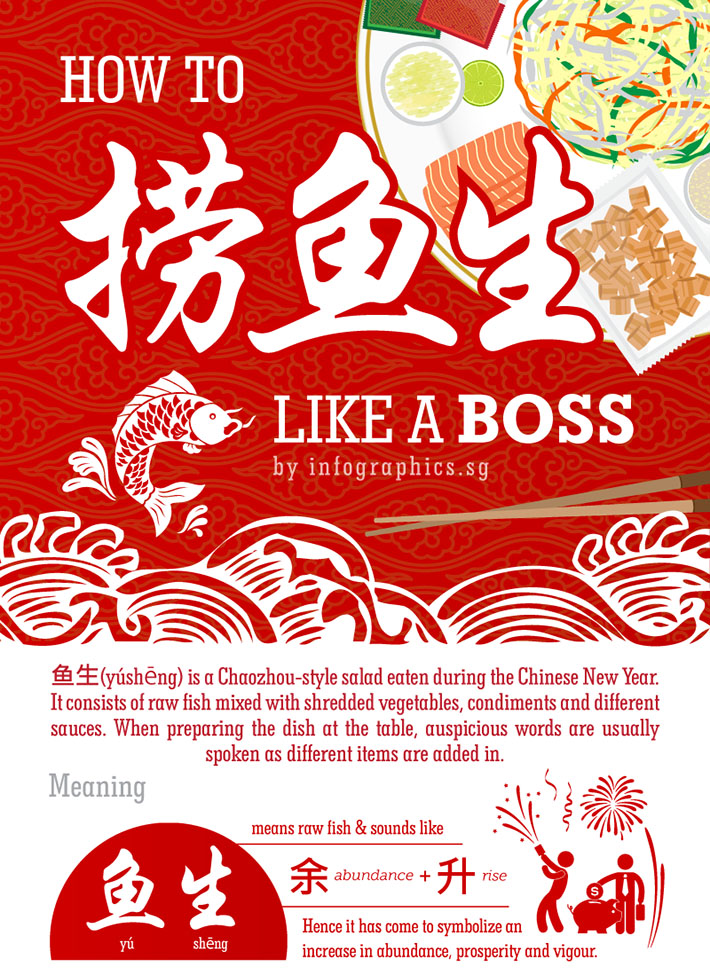 Before the tossing begins, the dish needs to be prepared, usually by one individual who adds the ingredients one by one in a specific order, while the reciting wishes of luck and prosperity at the same time.

With the plate placed in the middle, friends and family members stand around the table to toss the ingredients whilst exchanging blessings and words of prosperity—although, more often than not, people tend to just shout them out.

9 INTEGRAL STEPS & WHAT TO SAY

Step: Yu Sheng platter is placed at the centre of the dining table.
What To Say: “Gong Xi Fa Cai” meaning, “Congratulations for your wealth”.

Step: Raw sliced fish is added.
What To Say: “Nian Nian You Yu” meaning, “Abundance throughout the year”.

Step: Spice sachets are sprinkled over.
What To Say: “Zhao Cai Jin Bao” meaning, “May you attract wealth and treasures”.

Step: Oil and plum sauce are poured over ingredients.
What To Say: “Yi Ben Wan Li” meaning “Make 10,000 times of profit with your capital”

Step: Peanut crumbs are poured over.
What To Say: “Jin Yin Man Wu” meaning, “May your home be filled with lots of gold and silver.”

Step: Sesame seeds sprinkled over.
What To Say: “Sheng Yi Xing Long” meaning, “Wishing you prosperity for the business.”

Step: Deep-fried flour crisps in the shape of golden pillows are then added.
What To Say: “Man Di Huang Jin” literally translating to, “May the whole floor be filled with gold.”