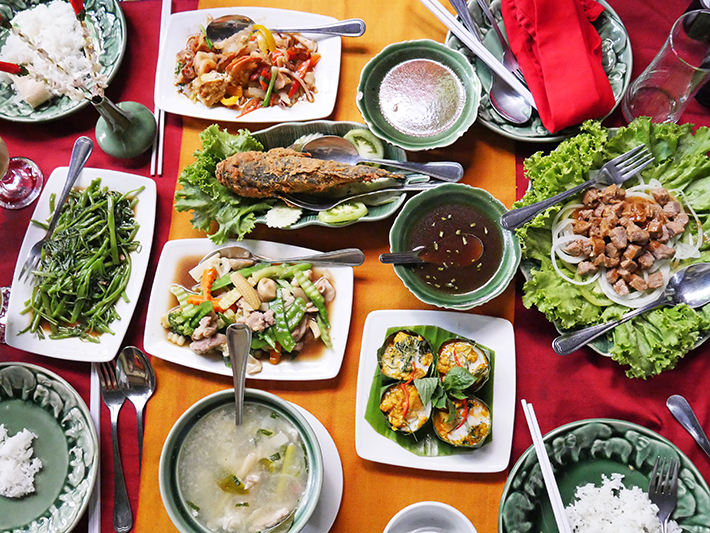 Armed with a handy weather-proof Panasonic Lumix DMC-GX8, we boarded a plane with the Panasonic team and embarked on a weekend adventure around the capital of Cambodia.

Cambodia is just a 2-hour flight away, and the historically rich third-world city is a destination in Southeast Asia worth visiting. An exotic experience is almost guaranteed if you visit with an open mind; indeed, we had a great time immersing ourselves into the Khmer culture.

It was surely a fulfilling weekend and we had the special moments all photographed with the all new Lumix DMC-GX8 that shall serve us as happy memories.

From visiting the Tuol Genocide Museum to sampling crickets, here are 12 Tips on What To See and Do with 48 Hours in Phnom Penh, Cambodia. 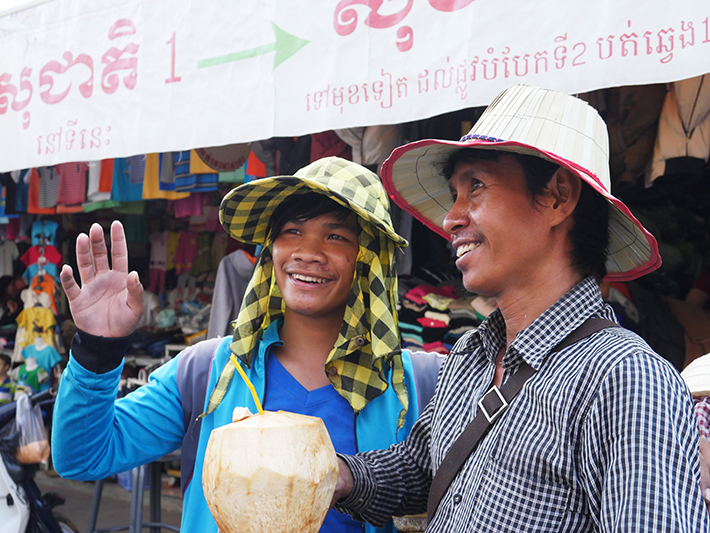 We could hardly believe that it has been only less than four decades since the Khmer Rouge took over The Pearl of Asia and turned the city upside down. Approximately 1.5 million innocent Cambodians have died and the end result is an imbalanced demographic. Today, Khmer youths, who are the descendants of survivors, make up the main population.

Over the past years, Phnom Penh has slowly but surely risen from the ashes and is such an underrated beautiful travel destination. 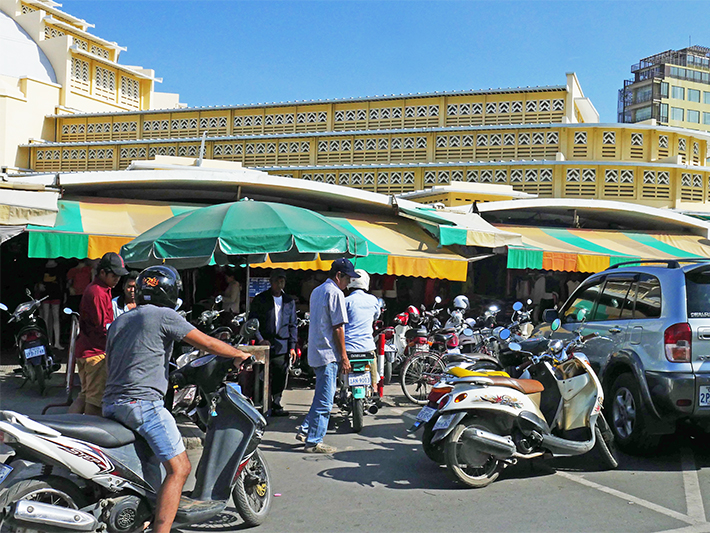 The Central Market was constructed in 1935 and since then, it has been an iconic landmark of Phnom Penh. The busy bazaar sells a myriad of garments and miscellaneous lifestyle items where you can put your haggling tests to skill. Singaporeans sure love bargaining, yes?

And if you take a walk outside Phsar Thmei, the sea of motorbikes skilfully traversing through the hectic roads in opposite directions would probably leave you in awe. Those riding skills, really.

This exterior shot of The Central Market you see here was actually snapped while we were still inside the van. You bet we were really impressed by how the Panasonic Lumix DMC-GX8 could manage such clear pictures even when we were seated in a moving vehicle.

The Central Market is open daily from 5am to 5pm. 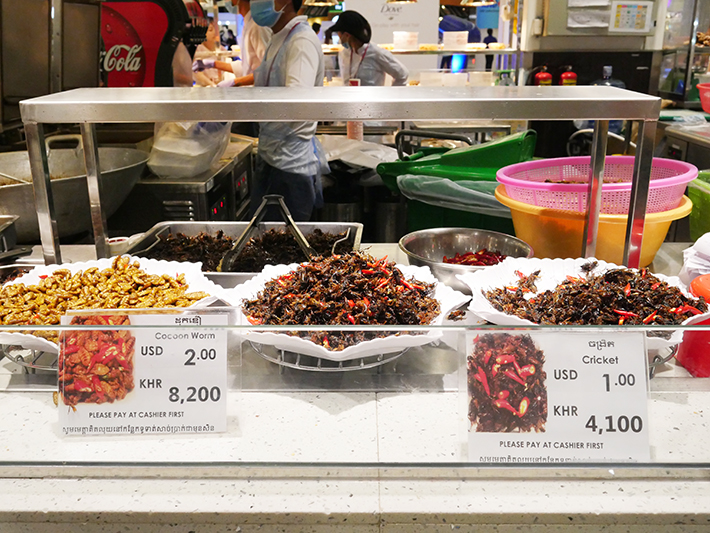 Aeon Mall is the first shopping centre in Cambodia and is a spectacularly large complex stocked with familiar global brands. But it is not the retail stores that we are after – head straight to the basement where you get to feast on an amazing spread of Khmer delicacies! This is when we laid our eyes on insects that have been fried with chilli, herbs and salt.

These deep-fried crunchy insects are actually considered a staple food in the diets of Cambodians. Curious foodies who have always wanted to sample cocoon worms or fried crickets (yet daunted by potential hygiene factors of street food) should give them a go at the underground food section of Aeon Mall. Challenge accepted?

P.S. They really ain’t that bad.

Tuol Genocide Museum was a detention camp for the Khmer Rouge where they captivated over 20,000 innocent civilians (women and children included) and tortured them to death. Only seven prisoners have survived the authoritarian regime’s Nazi-like inhumane prison. The museum displays brutal torment methods, crammed cells and portraits of victims.

No photography is allowed at Tuol Genocide Museum. Back then, this tragic site was known as Security Prison 21 aka S-21, which was actually a former local high school.

Caution: A trip to the Tuol Genocide Museum will leave visitors extremely heavy-hearted. Only those who truly want a better understanding of Cambodia’s violent history should visit. 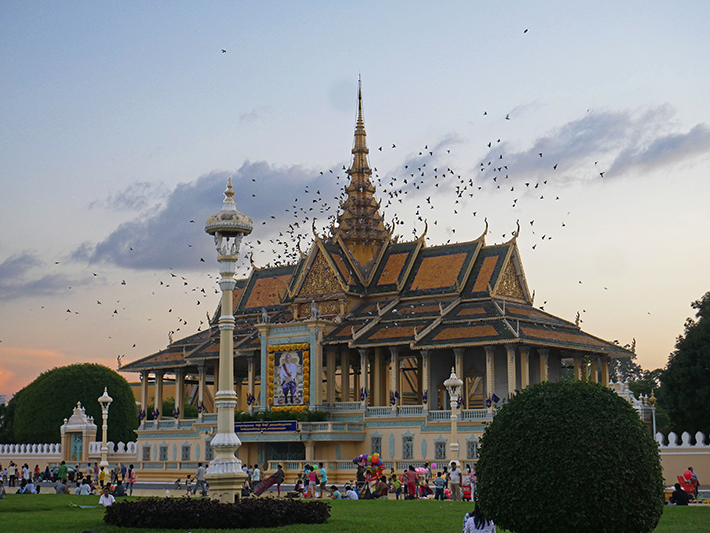 #4 CHECK OUT THE ROYAL PALACE

Constructed over a century ago, the Royal Palace of Cambodia is an attraction that you must stop by at. The magnificent historical infrastructure – characterised by traditional Khmer and European architectural styles – is home to the Cambodian King to date. You can visit selective parts of the palace complex or wander around the park situated outside of the royal residence.

Despite being a touristy place of interest, the public outdoor park is actually a hangout spot for the locals too. Visits to The Royal Palace are best during the late afternoon, so that you can witness the clear blue skies transform into spellbindingly stunning shades of orange. When night approaches, the palace is lit up by mesmerising lights.

The palace is open daily from 8am to 5pm. Located just a stone’s throw away from The Royal Palace, the 3-kilometre long bustling waterfront is lined with bars, hotels, restaurants and whatnot. The scenic Sisowath Quay is akin to the Orchard Road of Singapore, but with an alarming rate of pickpockets. Be mindful of your personal belongings and avoid flaunting your wealth to avoid unnecessary attention.

The promenade running along the Tonle Sap River is frequented by both locals and tourists. Elderly natives are seen practising tai chi along the sleepy riverside walk in the morning, while foreigners flock to the bars in the evening for happy hour promotions. Getting a tuk tuk or finding a dinner venue along Sisowath Quay is not tough here.

Pamper yourselves at Amara Spa where you call it a day with a relaxing massage. Depending on your preference, we actually thoroughly enjoyed the traditional Khmer full-body massage. Contrary to popular belief, the Khmer massage is inherently different from Thai massages. Only a little stretching is still involved and don’t worry, they are not back-breaking at all.

For starters, traditional Khmer massages are characterised by strong kneading strokes and will leave your body relaxed. Half the time, you will be lying on your stomach, while the other half will have you lying on your back. The idea is to have both the front and back of your body’s energy line massaged. Amara Spa’s 90-minute Traditional Khmer Massage costs only US$18. 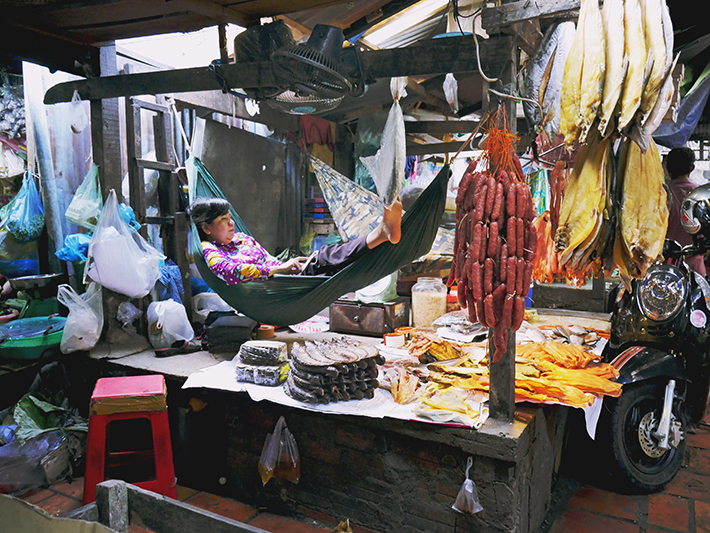 The Russian Market, otherwise known as Phsar Tuol Tom Pong, is a definite must-visit. Organised in a haphazard fashion, you are bound to get lost inside. An interesting thing about the Russian Market is that it is simultaneously local and touristy. From household goods, spare parts, clothing to glorious food, you can buy virtually anything here.

A bulky professional DSLR would not have allowed us to capture the everyday life of the Khmer people discreetly – but we managed to do so with the lightweight Panasonic Lumix DMC-GX8. The market was very gloomy but we actually succeeded in snapping clear vibrant photos whilst walking. The end result was desirable and we were completely sold by the camera.

The Russian Market is open daily from 7am to 5pm. Venture away from the eastern side of Russian Market and you will come across an art store called Hak Seng Kim that sells incredibly colourful, antique-looking sculptures. The shopkeeper was most kind by permitting us to photograph the displayed objects. And because the camera works brilliantly in low light, we’ve got some pretty great photos taken here.

With a quick aperture and ISO tweak, we managed to achieve the depth of field between each sculpture and the intended bokeh effect is everything to love.

And even after a long day of exploration, the weight of the Panasonic Lumix DMC-GX8 did not bother us – not one bit. It is indeed an ideal travel camera that is no hassle to bring around.

The Killing Fields of Choeung Ek are 15 kilometres away from Phnom Penh’s city centre. The massive graveyard is where thousands were executed brutally. While there are actually numerous killing fields around Phomn Penh, Choeung Ek is believed to be the largest. Around a third of the communal graves remain untouched and skeletal remnants of victims are visible.

An on-site Buddhist Stupa contains more than 5,000 human skulls and a memorial ceremony is held every 9th of May. This place serves as a haunting reminder that countless of innocent Cambodians have died from horrific deaths under the Khmer Rouge’s reign. It is hard not to be shaken after a trip here, hence kids and those who are unable to handle the brutality should avoid. 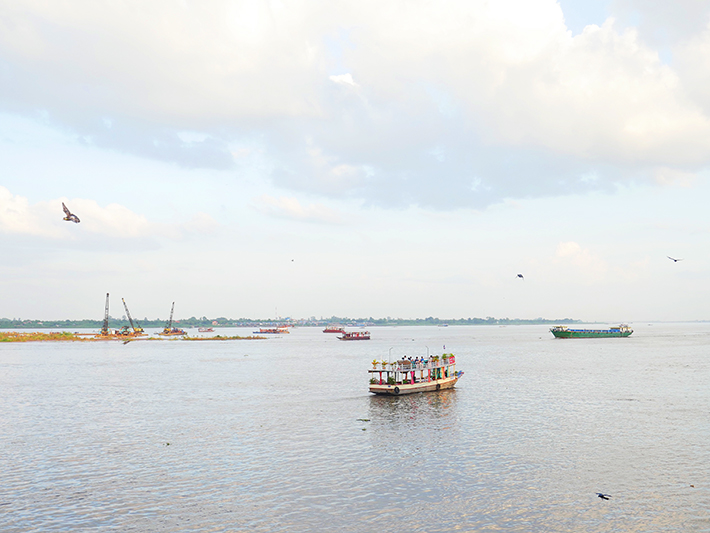 #10 CRUISE AROUND IN A BOAT

Several boat cruises are available and they serve as splendid alternatives to admire Phonm Penh’s skyline. These sunset riverboats usually include food and beverages onboard and it is an excellent way to meet new people. 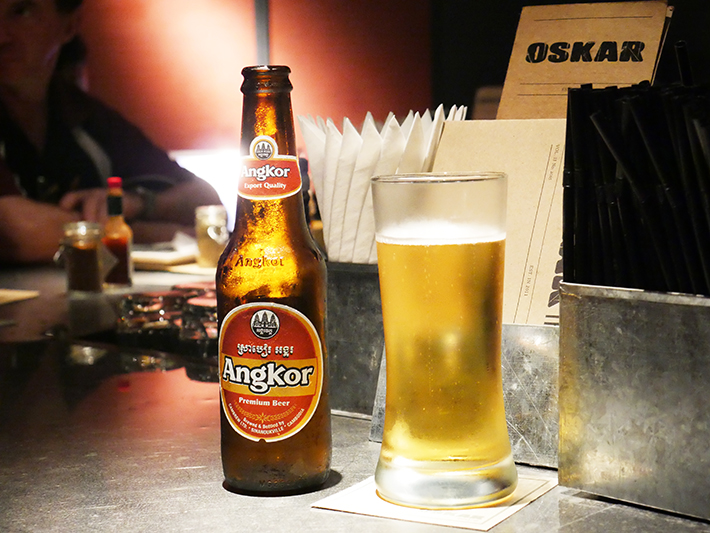 #11 DO NOT FORGET THE CAMBODIAN BEERS

Beer guzzlers will be elated to know that the beers sold in Phnom Penh are unbelievably cheap. You can easily get your hands on a draught beer at just US$1. Two famous beers to look out for – namely Ang Kor Beers and Cambodia Beers. The former is a full-bodied lager beer with a smooth pleasant aftertaste, while the latter is an aromatic thin-bodied pale lager. Excited much?

The above image of the Ang Kor beer was snapped in a dimly lit gastrobar. Frankly speaking, it was only a test shot – which explains the messiness and lack of styling, and oh, pardon the folded serviettes in the background. But what we are trying to imply is that the Panasonic Lumix DMC-GX8 works superbly well in extreme low lights. No graininess is visible despite the high ISO setting.

#12 END YOUR TRIP WITH A BLAST AT NOVA CLUB

If the party animal within you is itching to break out into epic dance moves, then head over to NOVA Club. Coined as one of city’s best nightlife destinations, the international nightclub is the go-to place for partygoers and the entertainment showbiz of Phnom Penh. Similar to other cosmopolitan cities’ party venues, bottle and table VIP services are available too upon request.

Having said that, travellers should still lower their overall expectations and try not to compare Cambodia to clubbing experiences in first-world cities. It is, after all, not a first world city.

Do note that a fancy dress code still applies – strictly no flip flops, shorts and tank tops are allowed. Ladies Night is on every Wednesday, and all ladies enjoy complimentary cocktails until midnight. 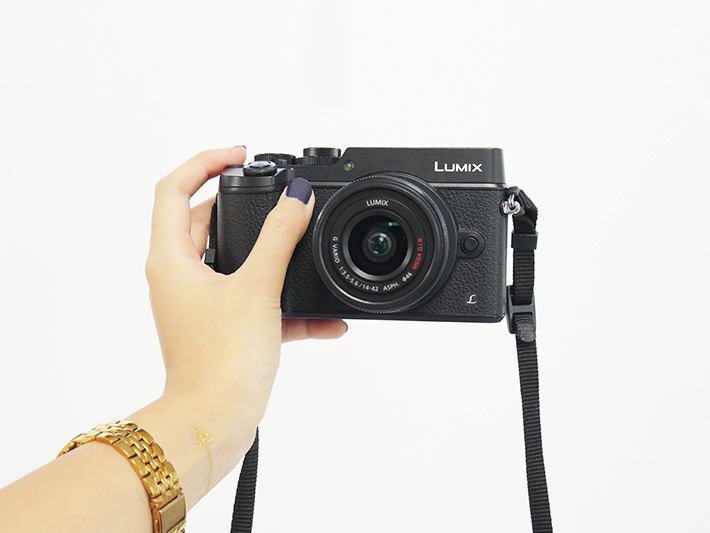 THE ONE EASY TRAVEL CAMERA YOU NEED

Capture your travel moments with the Panasonic Lumix DMC-GX8. It is retailing at S$1,699 (with standard lens kit) at leading authorized dealers, and comes in two classic colours.

This post is brought to you by Panasonic Lumix DMC-GX8.