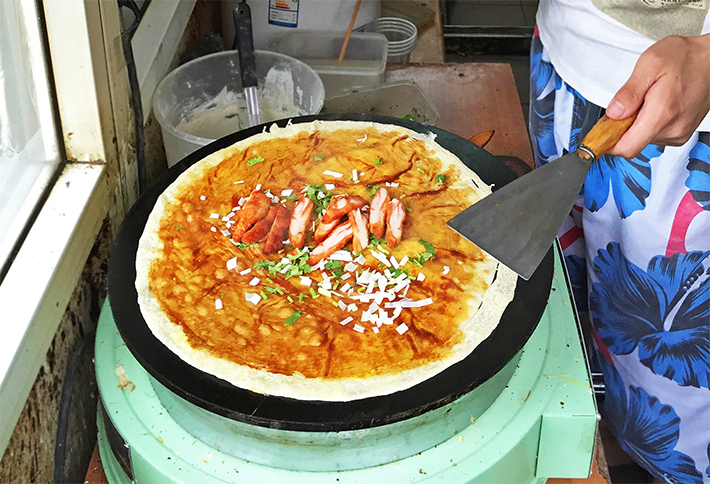 The Jian Bing is a tasty traditional crepe-like Chinese street food created by the Chinese since two millenniums ago in the Shandong Province. Legend has it that this heavenly dish had lifted the morales of an army troop during the Three Kingdoms Period and saved many soldiers from an ambush.

Jian Bings are an extremely popular take-away delicacy in Northern China and can be eaten throughout the day. Depending on one’s appetite, it can be consumed as a snack or even as a main.

While there is an impressive variety of street food in the capital of China, we highly recommend you to prioritise the exotic Jian Bings. They are akin to pan-fried folded pancakes, and textures and fillings actually vary across each vendor. You can easily find local Jian Bing stalls on almost every street of Beijing, especially right outside train stations.

Egg(s) is cracked onto the half-cooked dough before scattering sesame seeds and smearing soybean paste on it. Coriander, scallions and a crisp fritter is placed atop the surface before the pancake is folded several times and served to patrons piping hot in a translucent plastic bag. The exact ingredients used as the soft crepe’s fillings may differ slightly, depending on the chefs’ ancestry and preference. Customers can also choose to have the vegetarian option or opt for meat add-ons. The former typically costs around RMB 4 (SGD 0.90) while the latter is approximately priced at RMB 9 (SGD 2) each.

Each Jian Bing boasts an interesting contrast of textures; the delicate skin is well juxtaposed with the thin crispy baocui aka dumpling wrapper. 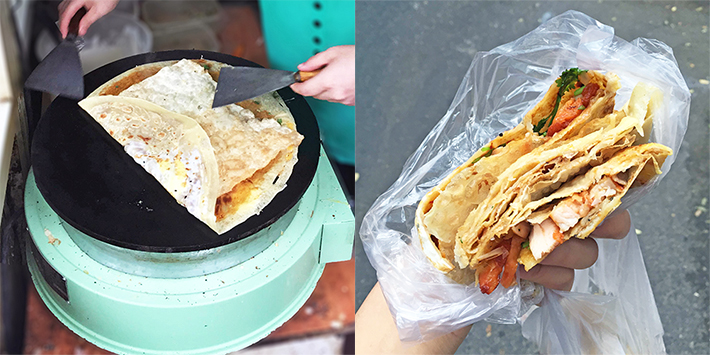 The delightful Jian Bing packs a punch in every bite! You can inform the chef in advance if you want a spicy or non-spicy version. Everything is flexible – all you have to do is ask before he/she cooks. Do be reminded that Jian Bing is essentially a local street snack so you can expect to find them in relatively shabby-looking sheds.

In case you are wondering, we never had any episodes of tummy ache during our stay in Beijing so we hope you too can let go of your potential hygiene fears!

Exploring Beijing’s vastness without a plan in mind is not feasible, especially when you only have a limited period of time. This is our suggested itinerary for those who have a 48-hour layover in Beijing.