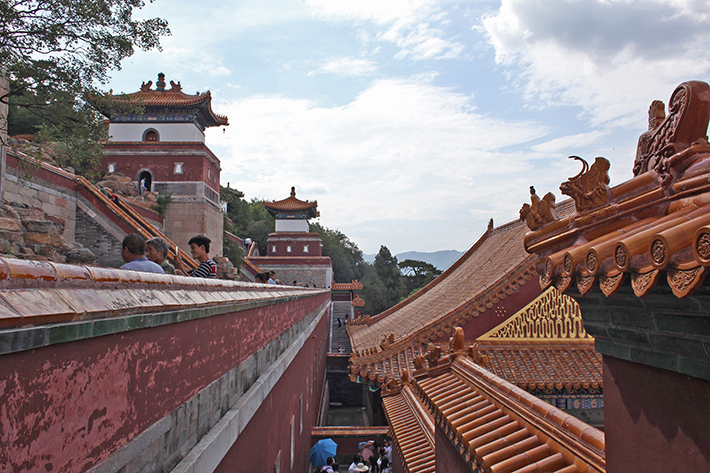 The capital of China is one of the world’s greatest ancient sites. Filled with many imperial relics dating back to over 3000 years, Beijing is a must-see destination for all travel enthusiasts and history buffs.

Today, the Chinese global city is a booming metropolis and is China’s arts, cultural and political centre. It is hard to believe that the municipality had only opened its doors to the outside world in 1978.

Exploring Beijing’s vastness without a plan in mind is not feasible, especially when you only have a limited period of time. One should not miss out on its UNESCO World Heritage Sites and the decadent Beijing cuisine!

This is our suggested itinerary for those who have a 48-hour layover in Beijing. 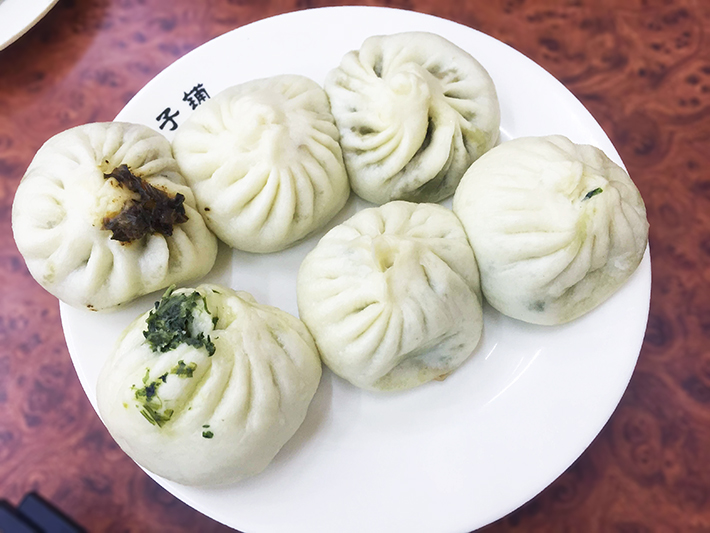 7.30am: Qing Feng Bao Zi is a long-standing brand renowned for their traditional stuffed buns. They have been such a well-loved household name that even President of China Xi JinPing was seen eating the buns at one of their outlets!

Diners get to choose from a variety of fillings such as picked vegetables and minced pork with leek. These lovely lukewarm buns also make a great takeout breakfast option. If you are dining in, do try their silk-like wantons too. 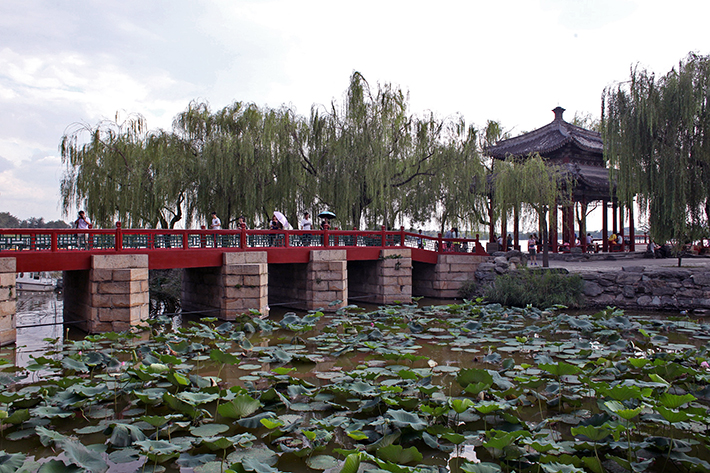 9am: The Summer Palace aka Yi He Yuan was once a luxurious meeting place for the Chinese royalties and comprises of several stunning gardens that are worth visiting. For an alternative scenery, rent a paddleboat and cruise around the 540-acre manmade Kunming Lake.

We reckon 9am is the perfect timing to experience the splendour of UNESCO World Heritage Site Summer Palace in tranquility. Most tour groups would be still having their breakfast elsewhere and you can stroll around the waterfront palace with negligible interruptions. 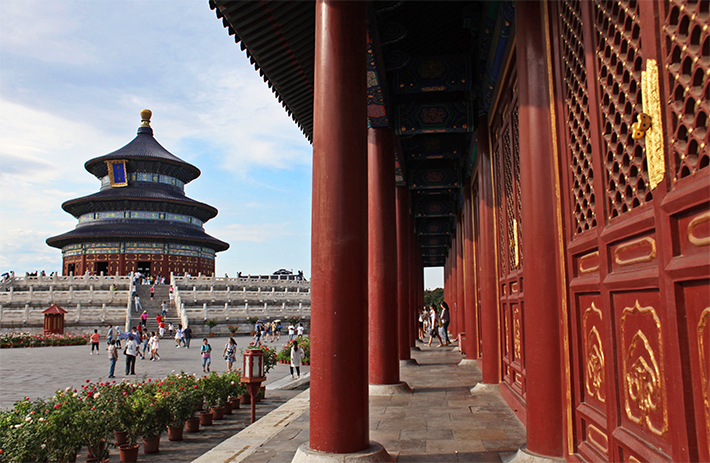 #3 VISIT THE TEMPLE OF HEAVEN

11am: The Temple of Heaven used to be a prayer ground for Chinese Emperors in both the Ming and Qing dynasties, where the kings would pray for good harvests. The religious ceremony was extremely exclusive and no commoners could catch even a glimpse of it. Today, the Temple of Heaven is an UNESCO-listed complex that spans over 267 hectares and is open daily (capped at 90,000 visitors per day).

While this attraction is undoubtedly touristy, it interestingly remains a favourite hangout place amongst Beijingers who reside nearby. In fact, you will see many locals doing their morning exercises and playing Chinese chess. 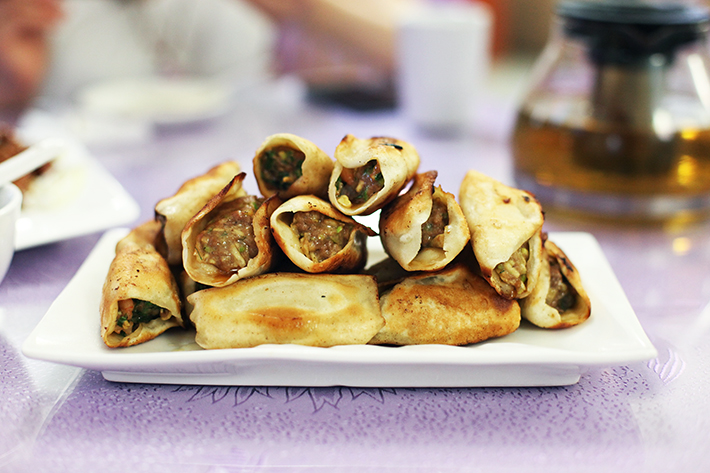 1pm: As its name suggests, Mr. Shi’s Dumplings is a no-frills Chinese eatery famous for their dumplings. Their signature pan-fried dumplings are stuffed with fillings of your choice and you can choose from 50 different fillings – even vegetarian options are available too! Prices start from RMB 15 / SGD 3.30 for a portion of 15 juicy greasy dumplings. What a steal.

Thanks to the availability of English menus, Mr. Shi’s Dumplings restaurant sees a large percentage of expat patrons on a daily basis. But that does not mean that this is a ‘tourist trap’. As Chinese ourselves, we thoroughly enjoyed the tasty dumplings and would recommend it! 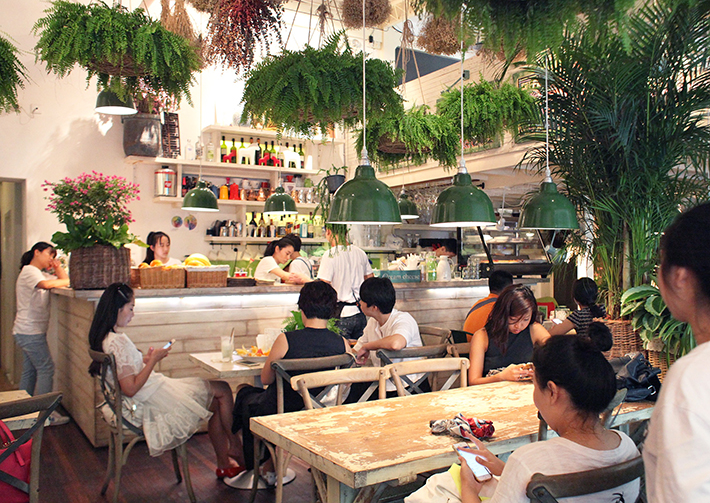 2.30pm: Hutongs are ancient backstreets unique to the capital of China and 800-year-old Nan Luo Gu Xiang is inarguably the most well-known hutong. The bustling street is is lined with takeout vendors, pretty cafes and retail shops.

But what caught our attention was the numerous alleyways diverging from Nan Luo Gu Xiang – many of these have led to the exciting discovery of hidden bars and cafes. So venture away from the main street and explore! 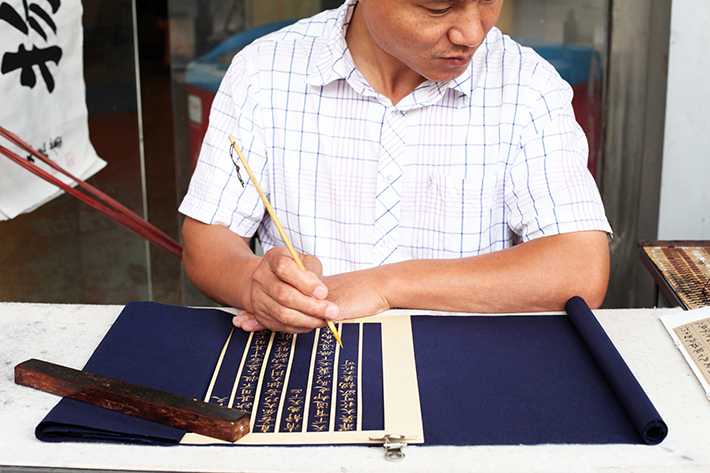 4.30pm: 798 Art Zone is an art focal point for both local and international artists. Many exhibitions and galleries are usually held in this vicinity – some of which you can enter for free. The vibrant street art wall murals and enthralling art pieces displayed publicly will keep you preoccupied. The art zone also boasts many unique boutique shops and eateries!

Two major art festivals – namely 798 Art Festival and Creative Art Festival – are held at 798 Art Zone district annually. The former lasts from end April to end May, while the latter is held between late September to late October. 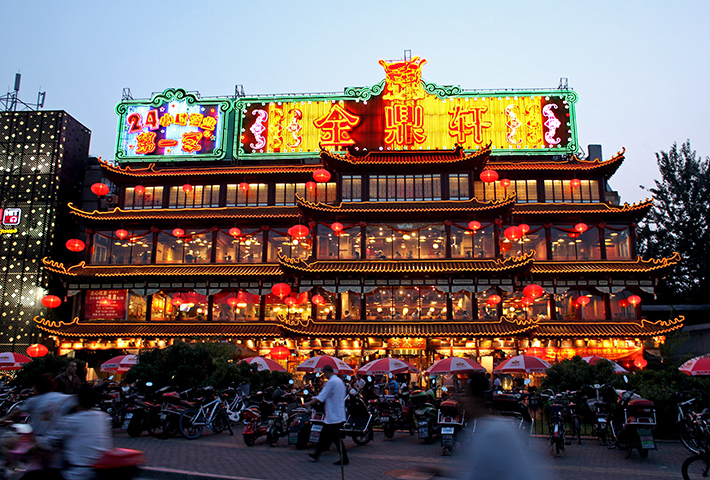 The dishes are delicious and comforting, but not mind blowing. Do be warned that the service is near atrocious, but the meal is still a great value for the amount you pay! 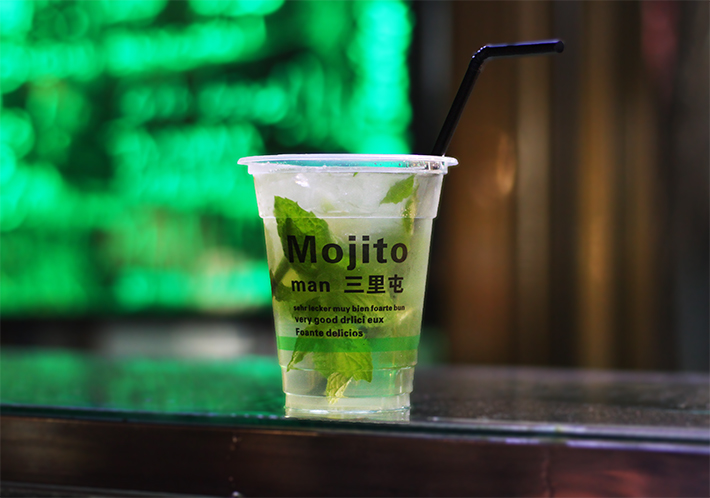 9pm: Home to over 80 bar establishments, San Li Tun Bar Street is symbolic of Beijing’s world-famous nightlife – where people from all walks of life frequent this party district every night. From live sports broadcasts to themed parties, there is so much going on every night!

While most global cities are particular about dress codes, Beijing’s bars clearly remain down to earth and unfazed by the world’s increasing emphasis on appearance. You can rock up in your denim shorts and honestly nobody really gives a damn. 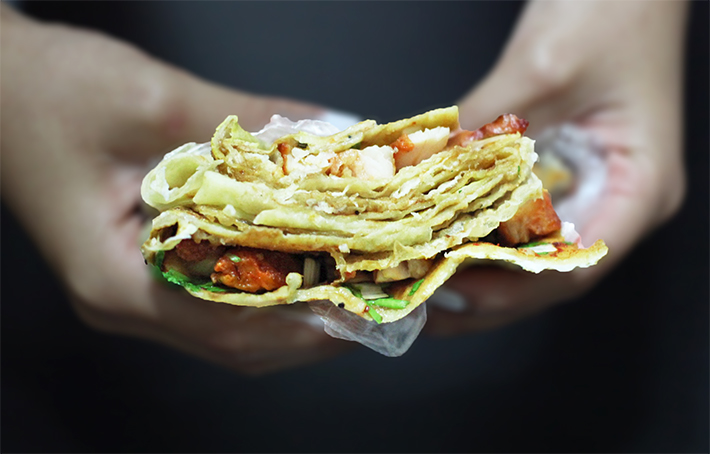 8am: Perk yourselves up with a piping hot jian bing! These takeout street snacks are essentially pan-fried soft crepes stuffed with coriander, crisp fritter, spring onions, soybean paste and optional meat. These delicate street food are most commonly found right outside major train stations. They are usually served in a plastic bag and eaten on the go. 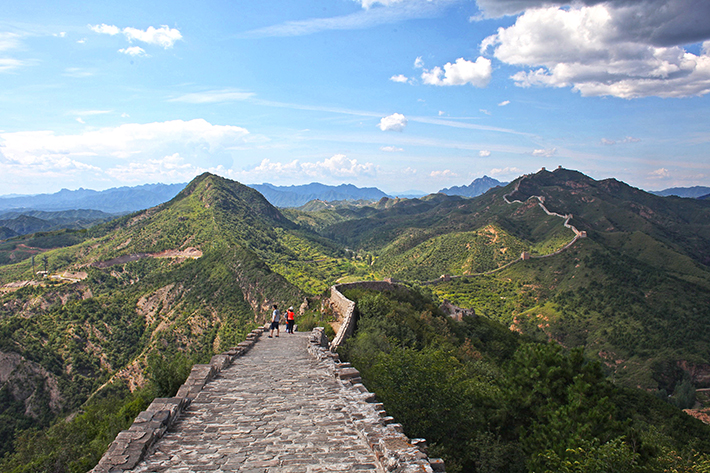 #10 CLIMB THE GREAT WALL OF CHINA

9.30am: Climbing The Great Wall of China is an opportunity that should never be missed! Even if your legs cannot take you far, we believe that the splendid view is still worth waking up early for. This timeless wonder is also the world’s largest and longest age-old architecture.

Do be reminded that it would take you approximately 90 minutes via car from Beijing’s city centre to The Great Wall of China. There are many different entrances to the timeless wonder; after all this ancient site actually spans across 5,500 miles! 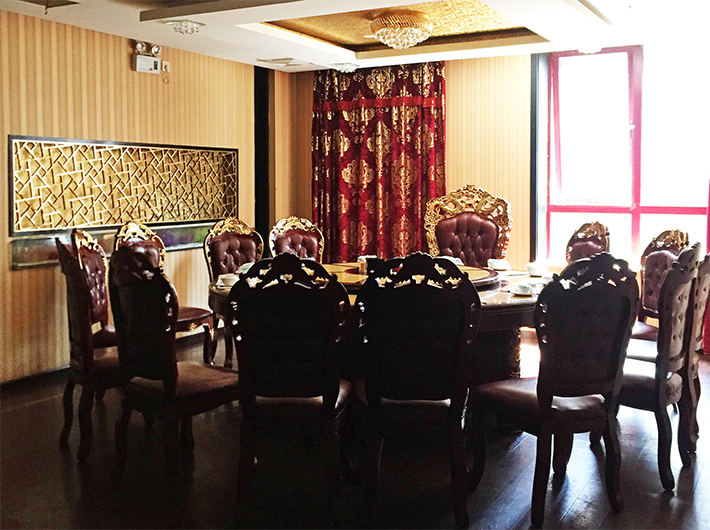 1pm: Ci Fu Restaurant is an underrated local diner with virtually zero online presence in the Western world. There is an array of delectable home cooked Chinese dishes to choose from and to our delight, very dish we ordered was to our liking! The generously portioned braised beef, griddled tofu and fragrant eggplants were impeccable and instantly made it up for the restaurant’s poor staff service.

The regulars at Ci Fu are mainly students from the nearby Peking University which probably explains the significantly lower priced items. The private rooms upstairs do not require minimum spendings and are extravagantly furbished. Unfortunately, the same opulence does not apply for the washrooms. We would return in a heartbeat for the divine dishes but never the toilets. 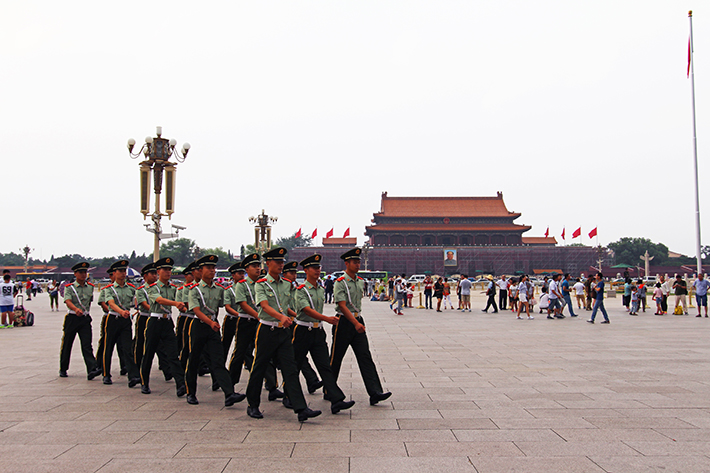 #12 CHECK OUT THE FORBIDDEN CITY

2.30pm: The Forbidden City aka Gu Gong was the designated imperial palace for 24 Emperors that reigned in the Ming and Qing dynasties. Covering over 74 hectares, The Forbidden City is the world’s largest ancient palace and has nearly 10,000 rooms! Of course, the construction of this impressive architecture was only made possible with a million labourers.

The distance between each gate of the Forbidden City is nearly a kilometre so do show up in comfortable footwear as a significant amount of walking would be involved. The Forbidden City is also iconic of Beijing and one of the most visited tourist attractions in the world. 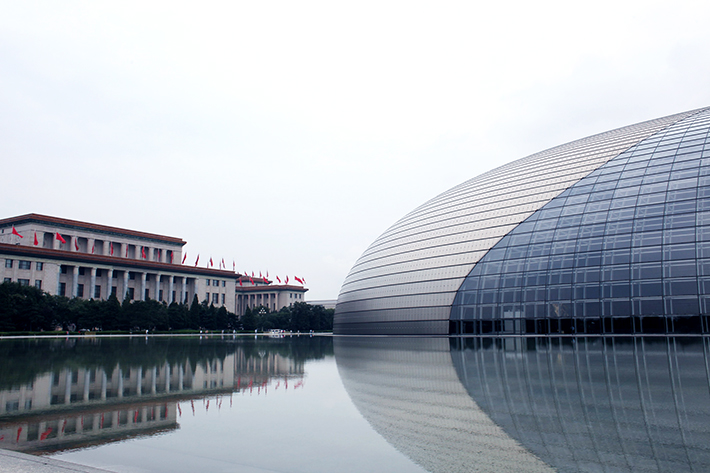 #13 MARVEL AT THE BEAUTIFUL NATIONAL CENTRE FOR THE PERFORMING ARTS

4pm: The National Centre For The Performing Arts (NCPA) is characterised by its gigantic oval-shaped exterior made with an astonishing number of titanium plates and ultra-white glass. The dome is currently the largest at present and is a spectacular visual treat for all architecture fans.

The surrounding manmade lake reflects the infrastructure clearly and is an amazing view! It does not matter if you are not catching a performance at one of the three in-house venues. The grandeur of this architecture is worthy of your time! 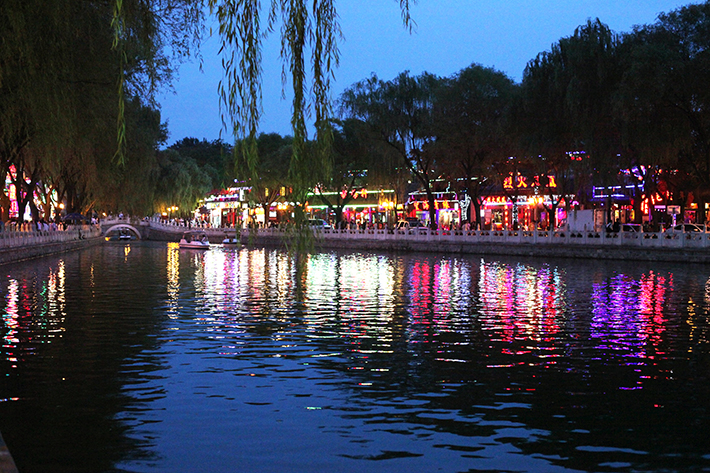 6pm: Shi Cha Hai is a historical scenic spot boasting three beautiful lakes – Hou Hai, Qian Hai and Xi Hai. It has always been a beloved recreational area for the Chinese civilians since the Ming Dynasty. While the modern day Shi Cha Hai is relatively quiet during the day, it transforms completely into a buzzing hub at night!

The riverbanks are occupied by a large number of bars and eateries – you can spot them from afar at night by their neon light signboards. Visitors can even board a boat and travel through the waterway to admire the scintillating view. 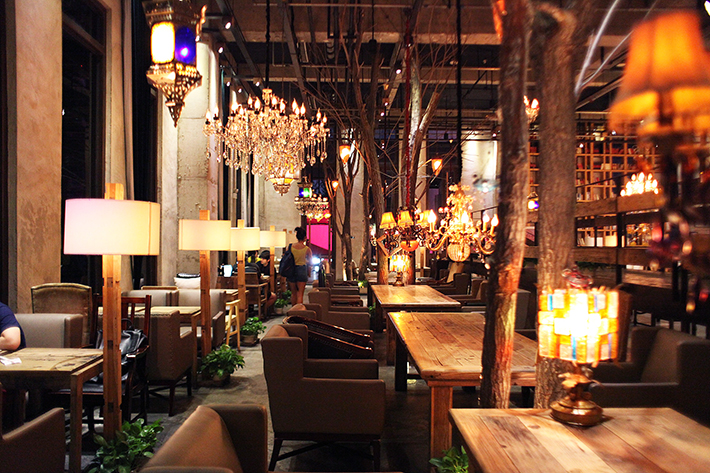 9pm: Beijing’s cafe culture is expanding at an incredible rate and we are thankful for the many exciting establishments, especially the Hogwarts-like Maan Coffee. Opened till the wee hours daily, this late night dessert spot is the perfect place to curb those sugar cravings.

Its ambience is so dramatic that we felt like we were in the Harry Potter movie! Maan Coffee was also featured in Forbes Asia magazine for its roaring success in China’s burgeoning cafe industry.

Disclaimer: Do note that this proposed itinerary is intended to serve as a rough guideline on what you can do in Beijing within 48 hours. Hence one might not be able to conquer all attractions within the short time frame due to lodging location, budget and pace of travel etc.

Hi, is the nearest station to Tian Tan – Beigongmen Station?

I was researching and it seems to be Tiantan (Dong men) station instead.