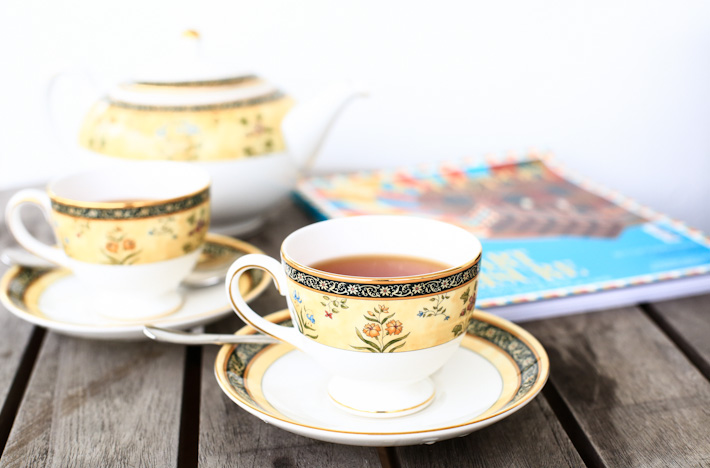 Tea has long been recognised for its healing properties and a wide range of health benefits. Whether it’s an upset stomach, a cold or even a headache, here are 7 ways you can heal with tea.

#1 If you… are stressed out or have trouble sleeping

Take: Chamomile tea or black tea (during the day)

This delicate herbal tea acts as a mild sedative and has anti-anxiety properties. Even it’s soothing fragrance will bring a sense of calm. In a British study, avid drinkers of black tea (four cups a day) were found to be able to calm down more quickly in high-stress situations. This is because the cuppa contains theanine, an amino acid that relaxes the brain and body.

#2 If you… have an upset stomach (bloating, pain, indigestion)

Ease your discomfort by sipping on some peppermint tea. The herb contains menthol, a volatile substance that reduces spasms in the digestive tract, and gets rid of bloating. Ginger is another popular remedy. It’s carminative, which means it prevents the formation of gas in the gastrointestinal tract. Besides that, it’s super effective against nausea and vomiting. Chamomile is possibly the most effective of all since it’s antispasmodic, carminative and anti-inflammatory – a good option especially if you prefer something that doesn’t feel “warm” in your tummy (an effect that peppermint and ginger can have).

Rosemary contains carvacrol, a substance with anti-inflammatory properties – it acts like a panadol would. Alternatively, try black tea, which contains caffeine. Tension headaches are caused by dilated blood vessels around the skull, caffeine constricts them, and that’s what provides the relief.

Research has shown that drinking green tea regularly will help you be twice as likely to lose weight as a non-drinker. Catechins and caffeine are the two chemicals that make green tea a superb metabolism booster, which in turn helps you blitz fat quicker. You will need to be drinking something like four cups a day to be seeing the effects, but it’s easy. Just throw three to four bags into a big jug and drink out of that throughout the entire day. You’ll even be reaping extra antioxidant benefits with the extended steeping time.

#5 If you… need an energy boost

Guarana is often used by athletes to give their performance an energy boost. It contains a high amount of caffeine, which stimulates the central nervous system, heart and muscles. On top of that, it contains theophylline and theobromine (also in chocolate!), which are chemicals similar to caffeine. Think of this as a natural version of Red Bull (and similarly, you shouldn’t be chugging too much of it!).

Echinacea contains active substances that give your immune system the extra pow-wow it needs to help fight infections quicker. Its antiviral properties have been shown to shorten the duration in which you’re feeling lousy from the symptoms of a cold (like sniffling and coughing). Some clinical trials have shown that taking echinacea as soon as you feel sick reduces the severity of the cold and results in less symptoms. Couple that with some rosehip tea, a vitamin C powerhouse that can help strengthen your immunity too.

The polyphenols (a type of antioxidant) in the tea destroy a good number of compounds in the mouth that can lead to bad breath and tooth decay. It is also the most effective temporary treatment for halitosis. A 2008 study done in Japan found that chewing gum and mints had no effect on the stinky sulphur compounds in the mouth. Toothpaste is also effective, but getting up to brush your teeth several times a day is a bit of a hassle, so just sip on good ol’ green tea instead!

I always have a selection of teas on hand to remedy a slew of problems. I haven’t tried Guarana or Rosemary tea yet, I will have to give them a try.