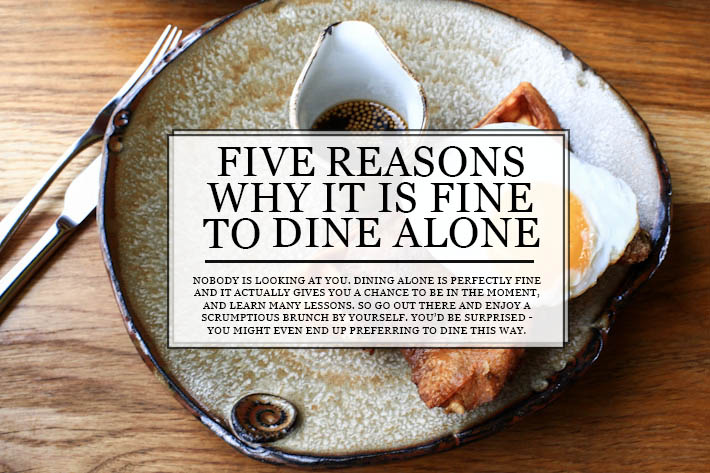 I’ll be honest. When Ladyironchef first asked if I could do this article, I was a little stumped. I thought to myself: Do people need to know that it is really okay to eat alone? But then I recalled the first time I had to have dinner by myself – yeah, I did feel a little (okay, very) self-conscious. I’ve grown quite a bit since then, so let me give you 5 reasons why it is perfectly fine to dine alone.

1. BECAUSE NOBODY IS WATCHING

No, seriously. You tend to think that rocking up to a restaurant alone is social suicide because you’re positive that as soon as you walk in through the door, sensors are going to pick up the fact that you are “1 pax” and immediately sound the siren to alert all the other diners about what a loser you must be to not have dining companions.

I would hereby like to offer you a top secret piece of information that will blow your mind and release you from these debilitating cuffs of discomfort… Ready?

(whispers) Nobody is looking at you.

That’s right. Put yourself in the position of the diner who’s already seated. How many times have you paid attention to who’s walked through the entrance or who’s sitting alone? And say you did notice the single diner, did you have any thoughts about him/her except to glance away at something else, or return to your conversation with your friend? I thought so. (Well, maybe except if said single pax is kind of hot and you and your friend start to gush.)

This was actually the reminder that got me through my initial discomfort of having lunch or dinner by my single self – that seriously, nobody is paying attention to me. 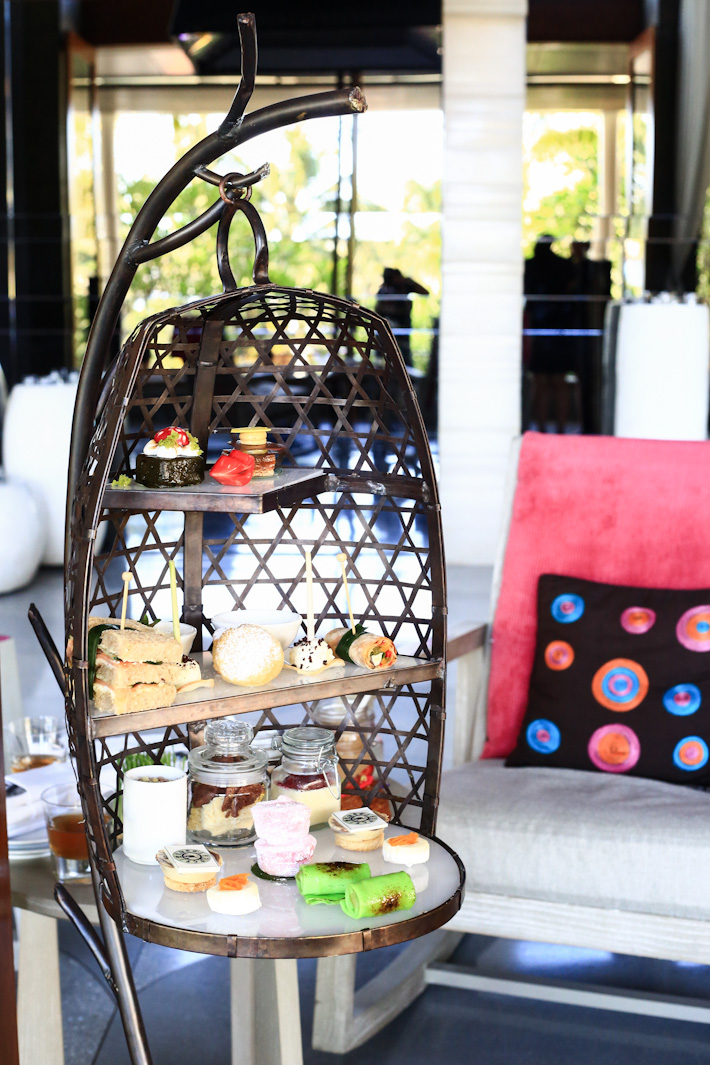 2. BECAUSE DINING ALONE GIVES YOU THE CHANCE TO MAKE NEW FRIENDS SOMETIMES

Communal dining is all the rage now – forget sitting at individual seats, the long table is where everyone’s hanging out. It can, however, make things even more intimidating. Sit next to strangers? Alone? Whuttt? Once, I was having dinner at super hip restaurant Burnt Ends, which only has one long bar table that faces the cooking area, so everyone sits side by side in a row. I had expected company but there was a miscommunication, so I ended up sitting by myself at the right-hand end of the long table. Things were made worse because there was one empty seat between me, and the rest of the diners. It quite literally looked like I was an outcast. I’ll admit – I did feel extremely awkward because of the seating arrangement.

Soon though, a guy filled up the seat and he was also a lone diner. We began to talk and by the end of the night I’d made friends with a Swiss guy who owned an art gallery and guesthouse in Penang, where I was free to stay at if I decide to visit. I learnt a bit about his culture and he learnt a bit about Singapore. Such serendipitous occurrences are quite nice, really. And you might not get the chance if you were absorbed in a conversation with your friend. 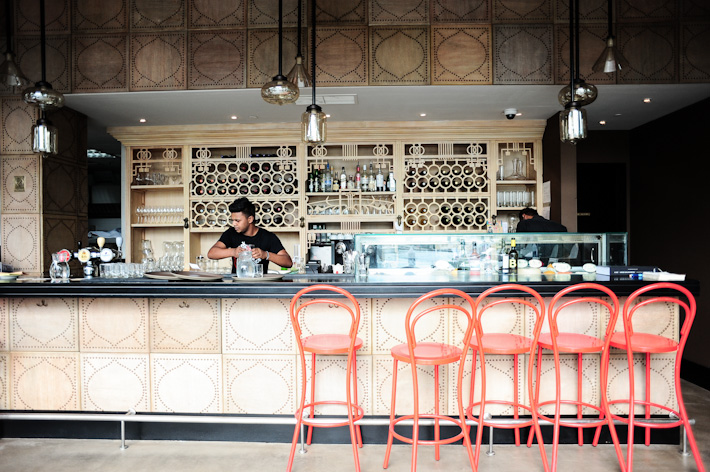 3. BECAUSE DINING ALONE GIVES YOU A CHANCE TO BE IN THE MOMENT

In uber fast-paced Singapore, you rarely get the chance to savour a moment for exactly what it is, whether it’s particularly exciting or not. I would like for you to try this the next time you’re eating out alone.

Or, simply let your mind be blank. Our brains are constantly bombarded by information and rest only while we sleep – how nice is it to be able to just daydream, or zone out during the day? I told you at the beginning of this article that I didn’t think eating out alone was scary, forgetting that I did use to think so. The reason is, after doing it several times and realising that truly nobody was paying attention to me, it gave me the confidence to keep doing it.

And here’s the thing, after a while, even if people were talking about me (though seriously, it pretty much doesn’t happen), it doesn’t bother me anymore. There’s also the false assumption that people are saying unkind things about you – what if they were actually talking about how nice your hair was, or that they liked your outfit, or maybe, that you looked like another friend of theirs? We’ve all done that before.

There’s definitely a sense of freedom and confidence in being able to dine alone – everyone should be able to enjoy this. 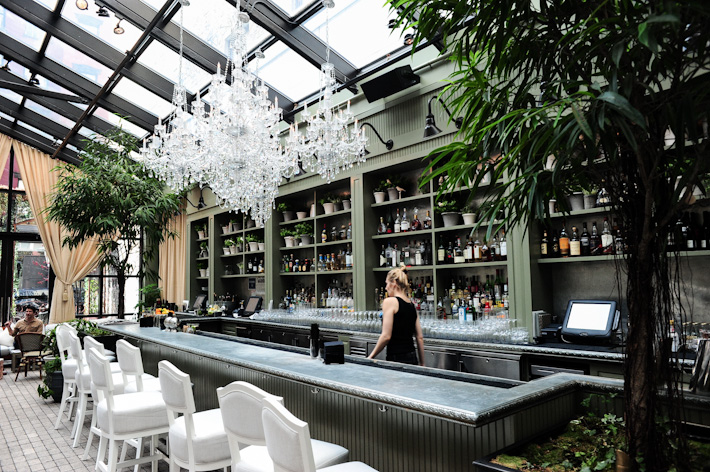 5. BECAUSE IT’S NOT A SOCIAL CRIME TO DINE ALONE

Society makes us feel like we are constantly competing with people around us. People seem to fear dining alone because it invites judgement that: we must be eating alone because nobody wants to have a meal with us. Now that’s just silly. You do have friends – they’re just busy. Maybe you couldn’t join your colleagues for lunch because you were rushing to meet a deadline. Or, maybe – ooh, shocker – you just want to enjoy some me-time. Eating by yourself does not make you inferior to people who have company.

I think that people who dine alone exude confidence. They’re comfortable in their own skin and don’t find it a necessity to constantly have friends around to feel good. Don’t you think so?

So go out there and enjoy a scrumptious brunch by yourself over a couple of weekends, relax and enjoy the moment for what it is. You’d be surprised – you might even end up preferring to dine this way!

About the writer:
Ruby Tan used to write for Her World, and is now a freelance writer with a dream to travel the world. She believes that the some of best things in life don’t have to be bought. If you want to make a friend, share travel tips and advice, or even to discuss deeply about life, write to her at [email protected]

couldn’t have said it better. get to know yourself, you know?

I totally get the point ‘BECAUSE NOBODY IS WATCHING’, i am also very conscious

. I also like to dine alone because i can eat as slow as i want

I also dine alone and I know what you meant about having some “me-time”. Great to know I am not ALONE!

I should try that without using phone. I always feel awkward or bored and ended up eating and using phone at the same time.

6. There is no one to share your dessert with.
Wipe that whipped cream of your dish, and savour the sweetest bit of your day.

I LOVE that very 1st picture.. Could you please tell me where the place is?

I think it’s better to eat with your friends, as they say, “the more the merrier.” But for me, eating alone is also fun and it can be the best time to have a peace of mind. You can also enjoy your food, since your only focus is to savour it. You don’t have to divide your attention. All the points you’ve discussed here are informative and they were right. Being alone doesn’t mean being “lonesome”. There are times you need to be only with yourself to enjoy some things in life – food is one =) I think adding information about some of the fine dining restaurants in Singapore, will also do good. I have search for some, like Restaurant André, Jaan, Iggy’s and many more.

Haha, since young I’m used to eating alone as I’m lazy to ask my friends to accompany me to eat. But if my friends sometime ask me to eat with them or when I saw someone I know, I would accompany them.

Yes I must learn to do things alone – shop, eat, exercise etc
will bear in mind that no one is looking

Same thought! I dine alone, sometimes as I want to have time for myself and not bothering to call friends especially at the eleventh hour.

Not easy finding me time. Those pictures accompanying each point look like fab locations. Some names please?