Montreal, cultural capital of Canada, and also the undisputed food capital of Canada. Located in the French-speaking province of Québec, Montreal has some of the most exciting gastronomical delights. Its unique food heritage is a blend of local Québécois dishes and food introduced by various immigrant communities. The great part is that the best food in Montreal are very affordable too.

You’d most likely be greeted with a “Bonjour!” before a “Hello” here, but don’t worry, because many Montrealers are bilingual. It’s only a one-hour plane ride from New York City and Toronto, or a five-hour train journey from Toronto. If you happen to already be in North America, make a short trip to Montreal and try these yummy food. 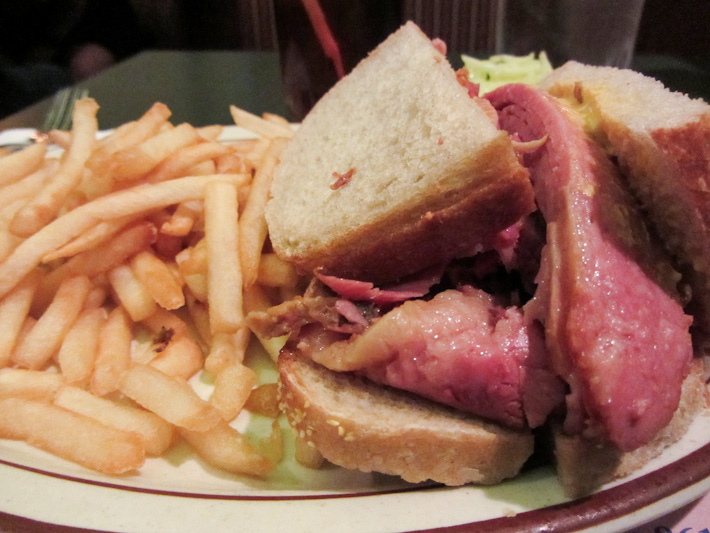 Smoked meat sandwich to Montrealers is what Hainanese chicken rice is, to us Singaporeans. In a word: Iconic. A dish brought in by Jewish immigrants as far back as the 19th century, meat is smoked as a preservation technique, with a blend of spices and herbs.

It is traditionally served with a splash of yellow mustard, with generous portions of smoked meat sliced right before serving, practically bursting between two slices of rye bread. Smoked meat is very tender and literally falls apart when you sink your teeth into the moist layers. Albeit, it is a little salty for the Singaporean palate but it is anything but flat. If flavours come in 3-D, the smoked meat would be it.

Smoked meat sandwich is readily available in Montréal, but the most famous smoked meat deli would be Schwartz’s, which has been around since 1928, though I should warn you about the notoriously long queues (I have been assured that it’s definitely worth the wait). An alternative is Reuben’s Deli, which is cosy and welcoming in a Tony Romas-ish way, (read: yellowish lighting, comfy booths, wooden interiors and friendly waitstaff). 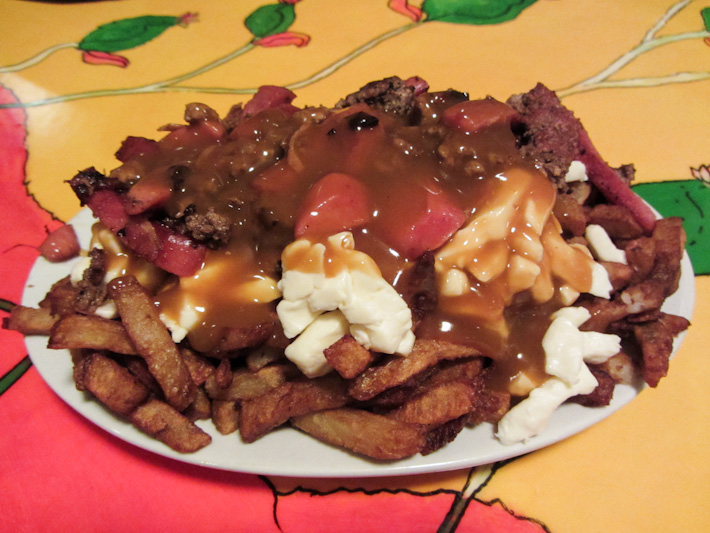 Poutine is a Québécois dish unique to the region, made up of French fries, cheese curds and drizzled with brown gravy. A hugely popular snack among locals and tourists alike, even fast food companies like Burger King have poutine as part of their regular menu here!

It is a Quebec-only exclusive menu item, that is not available even in the other provinces of Canada. Quebecers have also created fancier versions of the classic poutine, by adding over-the-top toppings, so that the poutine could sometimes even be taken as a meal on its own. For me, it is the perfect late-night snack.

La Banquise is the indisputable go-to place for the best poutine. Ever. If you are there, order the most elaborate poutine on the menu, “La T-Rex”. Just imagine: ground beef, bacon, pepperoni and hot dog, on top of a mountain of yummy fries, combined to form utter heaven with slightly-peppery brown gravy.

Another place that you should consider is Au Pied de Cochon, which is well-known for its Foie Gras Poutine. It is even featured on Anthony Bourdain’s No Reservations. Foie gras poutine. ‘Nuff said. Another favourite food staple for Montrealers, also originated from the Jewish community, is the bagel. While those familiar with the New York bagel might be used to a larger, denser version of the bagel, the Montreal-style bagel has a natural sweetness with a nice springy texture.

The most common way of eating a bagel will be slathering on some cream cheese—nice and traditional. If the New York bagel is colourful and flamboyant, its Montreal counterpart is understated and classic.

Visit one of the two most famous bagel bakeries in Montreal: St-Viateur and Fairmount. They insist on traditional methods of baking bagels over a wood-fired oven. It is always quite a sight to see mountains of bagels before you. And the smell! Oh, fresh bagels smell amazing! Fairmount’s bagel flavours are more adventurous, with choices like Blueberry, Muesli, Cinnamon and Raisin, Pesto and Black Olive… etc, just to name a few.

Montreal’s pizza is comfort food, whenever you are hungry after a late-night study session, you can be sure that pizza places would stay open until at least 10pm. Or even into the wee hours of the early morning on Fridays and Saturdays, because Montrealers appreciate the beauty of good pizza after clubbing. Its thin crust has a nice slightly-crunchy texture, so its thin but not all floppy like the NY pizza.

There are two places that you can go for pizza – Chez Dany’s and McGrill Pizza. Chez Dany’s prices are really cheap. For $4.99, you get a “Trio”: 2 slices of pizza, 1 can of soft drink and a good portion of their extremely delicious fries. The shoestring fries are the best fries you will ever have. McGill Pizza, which offers free delivery, is an all-time favourite among McGill students for its delicious and freshly-made pizza. 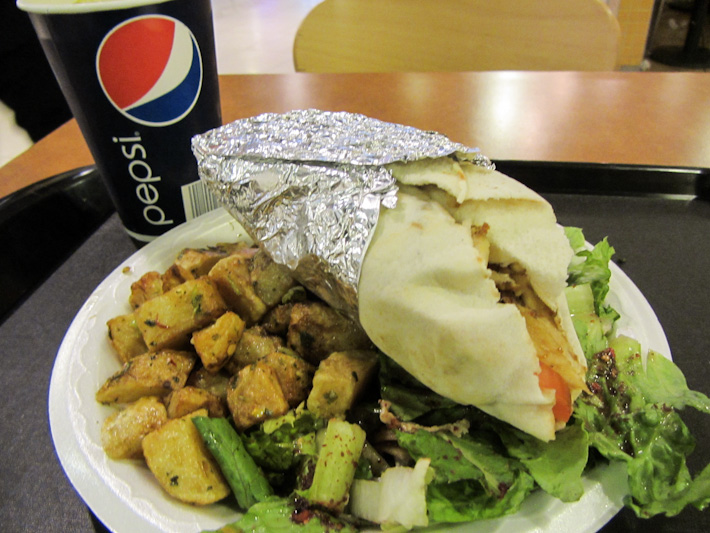 Middle-Eastern food in Singapore is usually pretty pricey, which you could only get at those chi-chi restaurants. However, with the large Lebanese community in Montréal (a more popular choice for Lebanese immigrants than English-speaking cities like Vancouver and Toronto, due to the common language of French), yummy Lebanese food is offered at very affordable prices.

A chicken pita sandwich from Basha costs around $4, with generous helpings of chicken shaved of the rotating rack and a variety of fresh vegetables. In part of a tiny indulgence, I got the Special Trio for an add-on combo of: a choice of salad, spiced potatoes and a fountain drink. If you like beef or lamb, check out the other stuff on the menu like the shawarma, or the merguez. Want to go for a vegetarian option? Get the falafels, which are deep-fried balls of chickpea and spices. Before you go, pick up a Baklava — a sweet, flaky dessert with finely-chopped nuts and syrup — for only a dollar!

About the writer:
Ng Jie Yu is a final-year undergraduate student at McGill University in Montréal, Québec, Canada. She is currently studying English Lit, with a minor in History (European region). Jie Yu loves writing, fashion, food and travel; she hopes to be an author someday.

I think you missed out on some key items, with the main one being freshly baked bread and pastries. Montreal has some very authentic french bakeries like Kouign-Amann, which has croissants that are to die for; Macarons at Point G or Cafe M; Olive + Gourmando….the list is really long!

Also, instead of pizza, I would argue that Portuguese Piri-Piri chicken deserves to be on this list, especially in the Plateau area, where many Portuguese immigrants have brought their gastronomic heritage with them.

correction: poutine can be found in the rest of canada, just that it’s not as readily available as in quebec.

Great choices. MTL is a killer eating city. The locals have such a passion for their favorites too. Missus Tasty went to school at McGill too and so every visit if a mix of new and her tried and true favorites. Our latest top 5 hit list is:

Those guys really kill it with everything from apps to drinks to entrees. Keep the Montreal coming. I’d love to hear what’s hot. BTW, I love the site and the Instagram. First time commenting. Sorry it took so long.

So agreed with Alyssa on Olive + Gourmando – stayed in a relative’s apartment around the corner from it for two weeks and had to resist visiting daily for breakfast/lunch/random snacks. Vieux Montreal is chock full of cafes and hidden surprises.

I live in Toronto and we have poutine in our menu (Burger King) as a regular item. I wouldn’t say that it is unique to the region as poutine is all over the streets of Toronto, even at McDonalds.