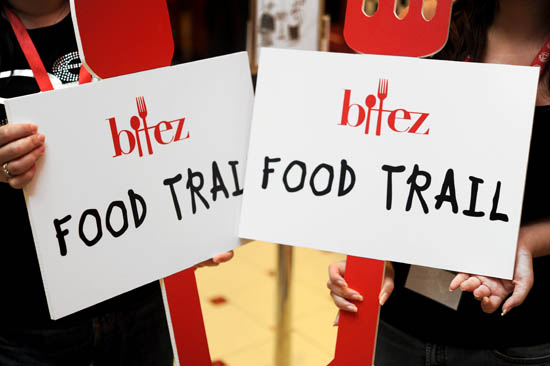 The idea of a food trail is very seductive. What’s there not to like when we can just eat, eat, eat, and eat for the whole day? Oh heck, we don’t even need to walk, there’s a chartered bus to bring us to the different places.

Bitez is an all-new SAFRA card and it offers an extensive list of dining privileges that is perfect for the avid food lover.

After I went for the Safra Bitez food trail a while back, I have been recovering from the feast and only got better enough to post it up now. The Safra Bitez Food trail is a 9-hour non-stop eating mission to savour the signature dishes of Bitez’s partners. Wow! That’s all I could say after joining the food trail for half a day.

Here’s a list of places that we went on the Safra Bitez Food Trail: 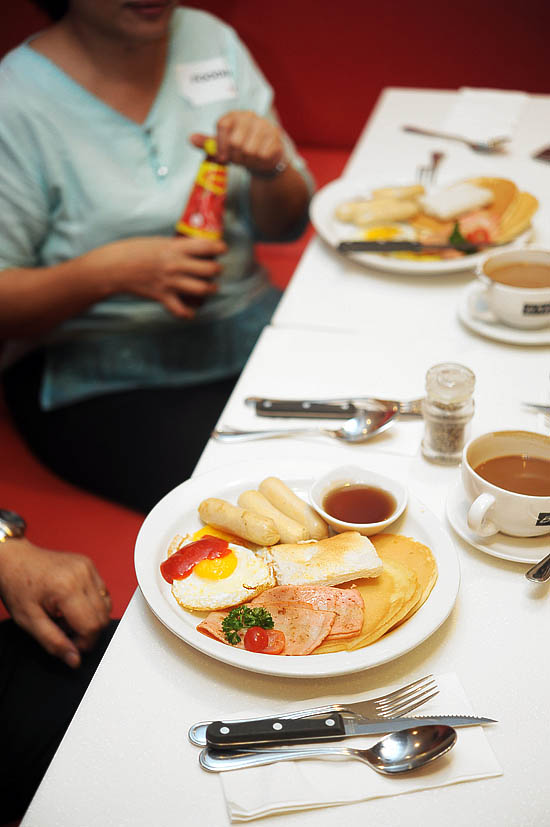 The day started in a dramatic fashion: strong gushing wind, with dark clouds looming behind. It didn’t matter what the weather was, the spirits of all 30 foodies was not dampened. We started our adventure at the most unlikely of places – the weighing scale! The organizers wanted to weigh the participants and see the differences in weight at the end of the food trail.

Whatever. I am not going on the weighing scale!

On the bus journey to the airport, I was hosting the “show” with my partner, DJ Charmaine from Power 98FM. The participants were really very enthusiastic as they gave us some recommendations on the best food places in the east.

Our first stop was a hearty  English breakfast at Breeks Café, an American-style café that has three branches in Singapore. Toasted muffins, double sunny side-up, 3 chipolata sausages, chicken bacons, and 2 slices of pancakes with maple syrup – brunch is the reason why we work so hard in life.

“Please pace yourself and eat moderately.” This was the advice that I told everyone. I’d know, since I always have ample experience when it comes to food.

After breakfast, Charmaine and I were paired against another two foodies to compete in a mini-contest. The task was relatively simple: eat the egg white without breaking the yolk. Easy? That’s what I thought too, until I realized that the organizers had something up their sleeves — we were only allowed one toothpick each!

To cut the long story short, the other two participants won as I accidentally broke the yolk within the first thirty seconds, it was a very close fight right till the last second. But the two participants eventually won the contest with their sheer determination. Both of them walked away with $50 worth of Safra vouchers each. Oh damn, I had already made plans on spending the vouchers!

Oh ya, there’s a current 1-for-1 promotion on selected items on Breeks menu for Bitez’s members. 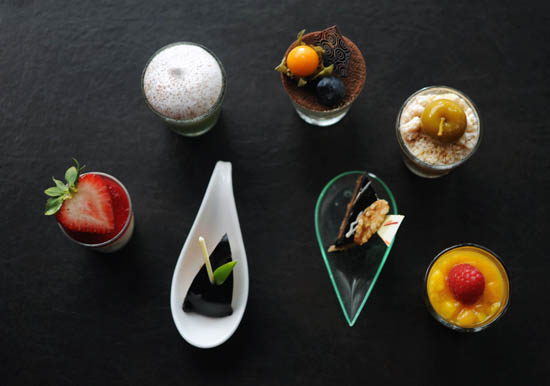 We moved on to Crowne Plaza at Changi Airport Terminal Three next. Time seemed to stand still as we entered the lounge. Rows and rows of dessert shooters were placed on the table, screaming: GRAB ME! All of a sudden, it felt like we were in a mini dessert paradise, and nothing else seemed to matter anymore.

The 7 Sins signature desserts from Crowne Plaza were appealing in both visual and taste. My eyes failed to focus as they drifted around while the chef was introducing the different desserts. Hurry up chef, I’m not interested in the name and ingredients of the dessert shooters – just give them to me, just give all of them to me! 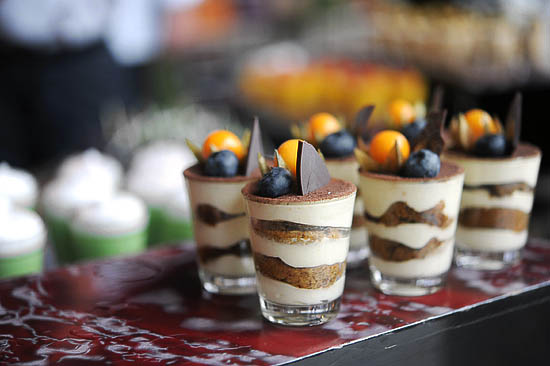 Other than greed, lust and love, there’s really nothing like a good tiramisu. I easily finished two shooters on my own, and for a moment, I was tempted to ignore the other desserts and concentrate on the tiramisu. 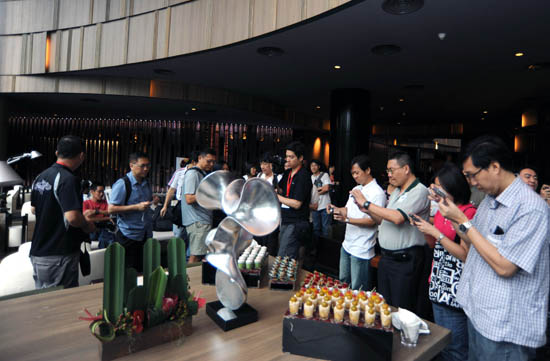 After the initial craze over the pretty desserts, the participants crowded around the Executive Chef of Crowne Plaza, Chef Eric Neo. Most people recognized him from television and they were scrambling to take photographs with him. I had a few minutes with him, and it was really interesting to hear about some of his experience in the daily running of the Crowne Plaza restaurants. 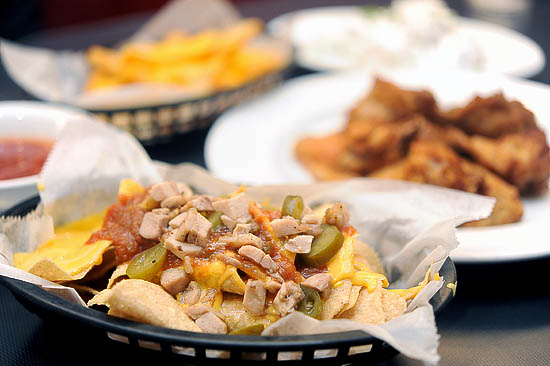 I’m sure everyone knows Billy Bombers. They are an American café chains that serve huge portions of your favorite burger, chicken wings and milkshake.

It was around noontime when we arrived at Billy Bombers @ Marina Square. You know what that means? It’s LUNCH TIME! After the heavy breakfast and all the desserts, I almost fainted when I saw the amount of food waiting for us at Billy Bombers. By then, my stomach was almost filled to the brim and all I could manage was a few nibbles here and there. 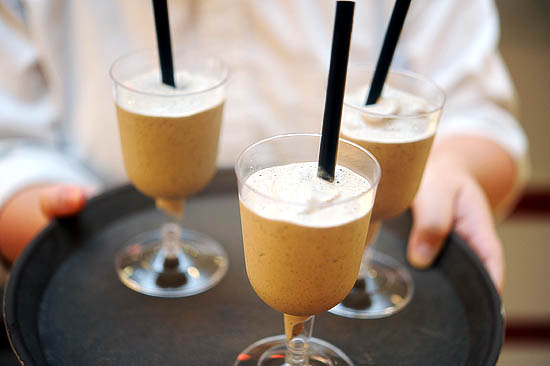 Milkshake is like ice cream, except it’s better because it never melts.

Billy Bomber’s rendition was one of the best milkshake in Singapore I’ve had before. It was thick, yet not heavy, creamy and tooth-achingly good. I bet you are very hungry by now. So here’s good news: Bitez members get 50% off 2nd order of Billy Bomber’s Special main course. My journey of the food trail ended at Billy Bombers, and my fellow blogger Sheylara took over for the second half of the day.

The organizers had recorded down the entire food trail; you can drop by www.facebook.com/safrasg to see the other two videos. But you have been warned – it’s just going to make you even hungrier!

If you are interested to join the next Safra Bitez food trail, check out Safra Fanpage for more exclusive food and beverage dining deals!

I felt that this trip restaurant quite typical. Anyway my friends and I would like to go for an 5star buffet serving quality food, I would like to hear your recommendation. Hope you can helped me if you’re free?. Thanks